The weather forecast for the day was looking excellent in Glen Etive, and our plan was to try to get a good photo of a winter sunset on top of a Munro - Sgurr na h-Ulaidh (pronounced sgur na hully from what I understand

) To do this we thought we'd start out at around lunch time, figuring out we would reach the top around 3.30 - 4pm just in time for a glorious sunset! Well that was the plan!
We started at around 12.30 from the forest in Glen Etive (142485) where there was a small area to park your car. The weather wasn't looking the way the forecast had planned (often the case!) but no matter...there was always hope!
The first part of the walk was following the forest road...be wary here as large machinery is in constant use cutting down the trees. (Follow the track to the right over the bridge) 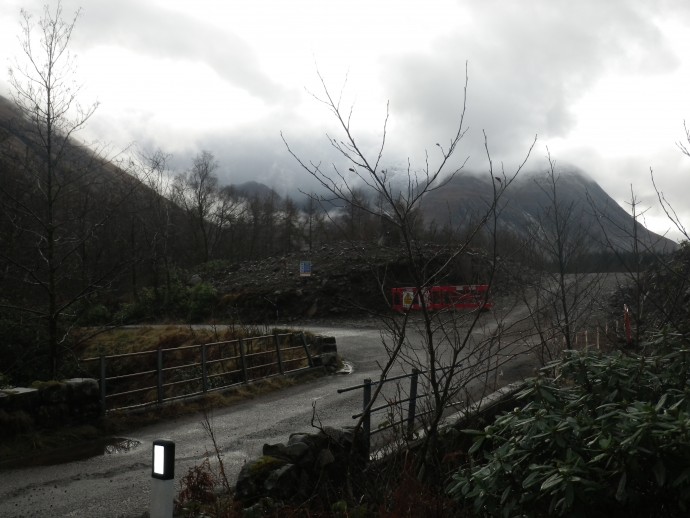 The track opens up into where the main logging was going on, and all the trunks were piled up. Keep to the right of this and carry on up the track, following the edge of the forest. Eventually after 20 mins or so following this track a small cairn on the track marks the path to the exit of the forest. 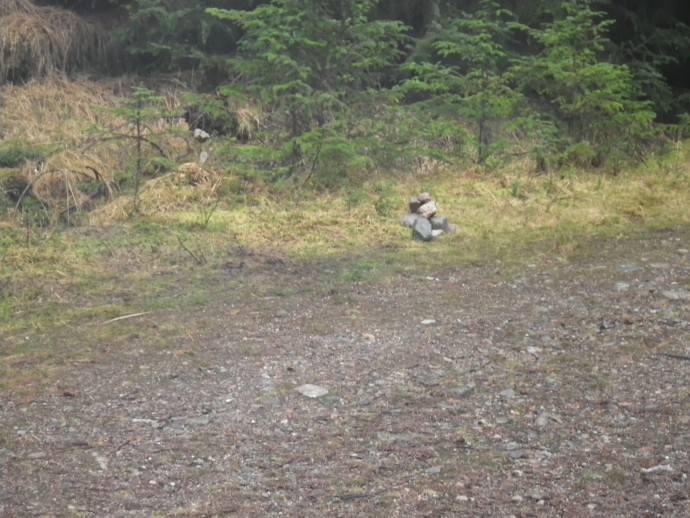 Path to edge of forest

At this point there was also a fallen down tree, but the path forward was easily found. Another 10 or 15 mins walking along this path takes you out to edge of the forest. At around 250m we were starting to hit the cloud level. Track up to Bealach

It took about 2.5hrs to reach the bealach (627m) with steady easy climbing. The views were still disappointing - we couldnt see the mountain we were climbing, and we couldnt see any chance of the cloud breaking. At this point our only hope was a cloud inversion (I know....!) The light was going, so we changed our goal, to just get to the top and forget about any good photography! At this point the climbing got ....more interesting! The route up got more steep as expected, and the snow from 600m made it quite slippy as it hadnt frozen. 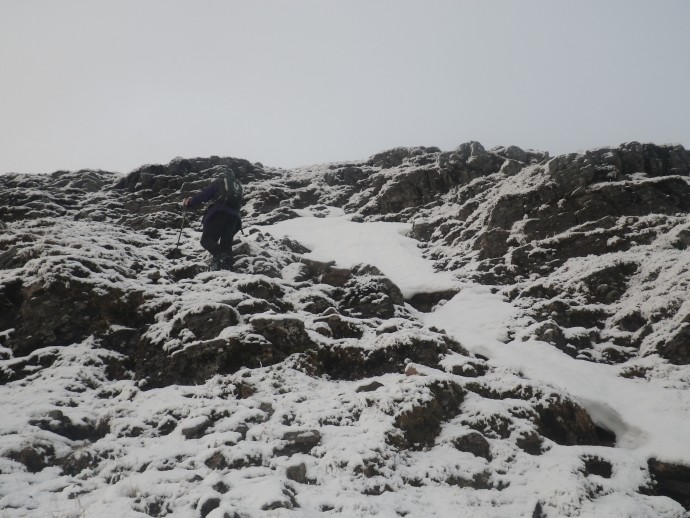 We followed a broken fence up the main ridge for most of the way. There were several sections which required some basic scrambling and wasn't looking forward to coming back this way in the dark!
Eventually got to the top at 3.30pm and you guessed it there was no cloud inversion (wishful thinking 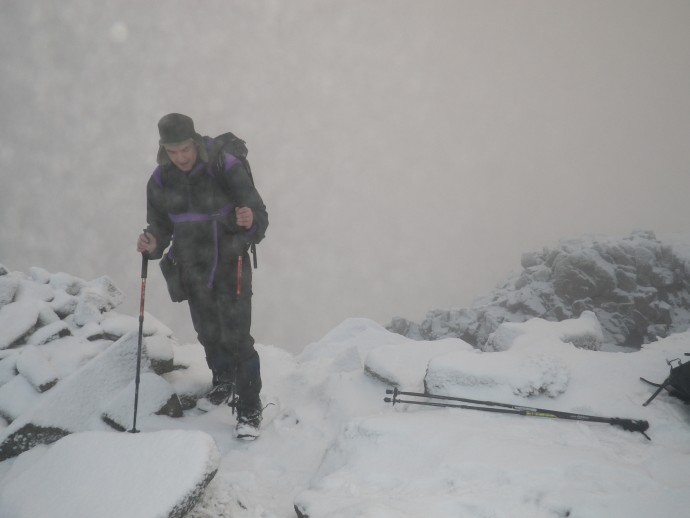 Given that the sun was setting and the route was tricky on the way back we didnt hang around much! We started our decent after a quick sarny and some hot chocolate....and with frozen fingers headed back down again. Just had time to take a shot of the cairn with my DSLR.. 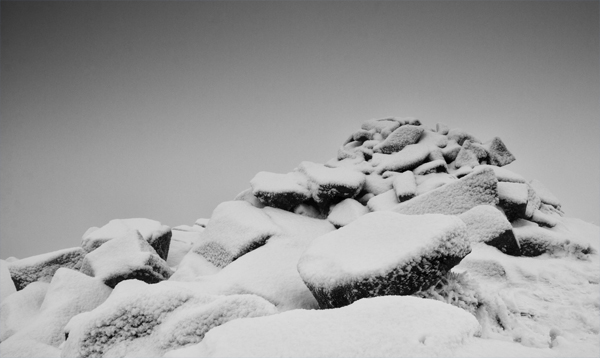 On the way down...u guessed it...the weather started to change and the clouds were breaking up! 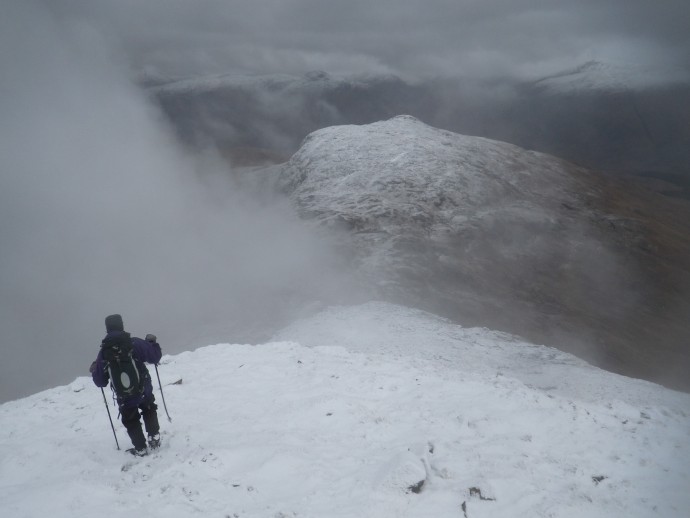 Route back to Bealach

We could still see our route back...just, but I wanted to stop back at the bealach and take a shot while I could.
So in the knowledge that we had successfully cleared all the difficult terrain, we set up tripods from there to take what was left of the failing light.
Below is my alternative view of Loch Etive from this point! We kept our torches off using the starlight as by now it was quite a clear sky! Eventually after numerous stumbles, we resorted to switching them on. Obviously we lost the track back to the forest, but we were fortunate enough to remember the altitude the path was at at the edge of the forest. We were off by about 100m or so, as we had naturally kept higher than we needed to in our descent. Anyway, once we found the track again in the woods, it was another 1/2hr back to the car through the forest (don't mention blair witch!) A good walk all round and good to come off the hill in the dark. Shame about the lack of cloud inversion, but its a bit like chasing the end of the rainbow to predict when that will happen!

yeah it was pretty craggy....we chose to follow our foot prints back down again as at least we knew where we would have to down climb. When we stuck our crampons on it wasn't that bad after all and managed to find alternative routes instead of down-climbing the crags. Still, wouldnt have wanted to do it in complete darkness!

Unlucky on not getting photo Seamus, maybe next time,,, you must be Irish with that name

Love the photo of the sunset!

Yep from NI, nickname stuck with me!:-)

They rarely seem to turn out to be correct from what I can tell.

A tough hill this one, whichever side you approach it from. I did it from the other side and for one reason or another it took me three attempts. Still, seems like your efforts were finally rewarded with that last photo alone

seamus0 wrote:our plan was to try to get a good photo of a winter sunset on top of a Munro

seamus0 wrote:we couldnt see any chance of the cloud breaking. At this point our only hope was a cloud inversion

seamus0 wrote:we changed our goal, to just get to the top and forget about any good photography!

At least you bagged munro!

And then (drum rolls): a fantastic alternative sun set!

Thanks for the comments, yeah one more munro bagged! That's the good thing taking up photography, you never leave disappointed either u get some photos and/or climb a munro, unless of course its blowing a hooley and the goal then is just getting off the big lump:-). Speaking of which just heard the news re the avalanche, stay careful out there, the hills will still be there under safer conditions.

seamus0 wrote:Yep from NI, nickname stuck with me!:-)

Was up your way over the new year, i'm originally from Waterford

Don't mention this hill and weather forecasts to me again!!

Got absolutely soaked.
There were drier fish than us that day!

You maybe didn't get what the forecast promised but you still got a half decent looking day and some cracking photos to boot!

cheers, i guess if weather was a formula in scotland it would go something like (cloud (- rain - wind))=1/2(decent day) !

the "alternative" photo is fantastic!