It's been several weeks since Damson & I have reached a summit having been interrupted by Xmas and terrible weather. Nearest we got were a wander round the Queens Wood in Leominster with my granddaughters over Xmas week and geocaching at Sizergh Castle with Ellie.

We have been expecting the snow that has obliterated the rest of the country down here on the Furness peninsula and only got a mere smattering, so when the weekend came round we were determined to hunt a little bit down by climbing to it.
To be honest, if this was my only driver, I failed miserably because we drove past most of the snow drenched tops and made our way north to complete some more of the North Western Fells. Having done the Lords Seat ridge a year or so back with my son-in-law, it was time to return and complete the 3 surrounding fells plus find the geocaches on the 3 I'd already done.

The drive north was very easy with very little traffic about and clear, un-icy roads.
We parked up at Brunston Bridge between Ling & Sale Fells and switched on the GPS. Across the bridge to begin with and onto the Corpse Road leading in a big spiral up towards the summit of Ling Fell. The "corpse road" refers to an old cart track built to cart dead persons by horse and cart between dwellings and the churches over the fells in the area. There are several in the Lakes and have been used as the basis of a great book I've been reading from author Martin Edwards who has written 5 books so far based in the Lake District. I've got through 2 so far and they are a great read. A mixture of murder and mountains. 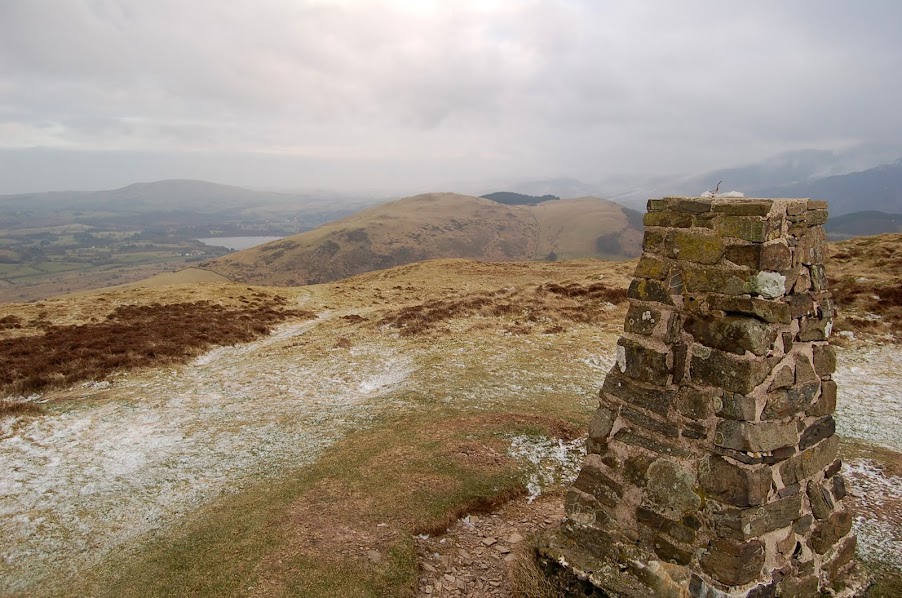 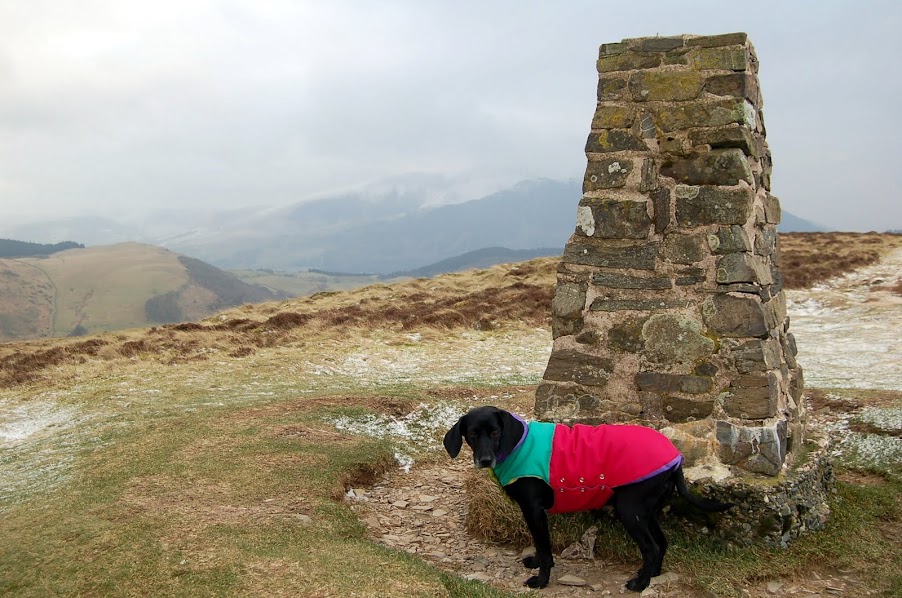 From Ling Fell we dropped down to the wall / fence line leading across the bog land towards Graystones. The original plan was to head further west to avoid the worst of the bog but as the ground was frozen it was fairly easy to follow the fence line all the way to our second summit.
Snow fell in single flakes throughout the day which was pleasant and not too cold. 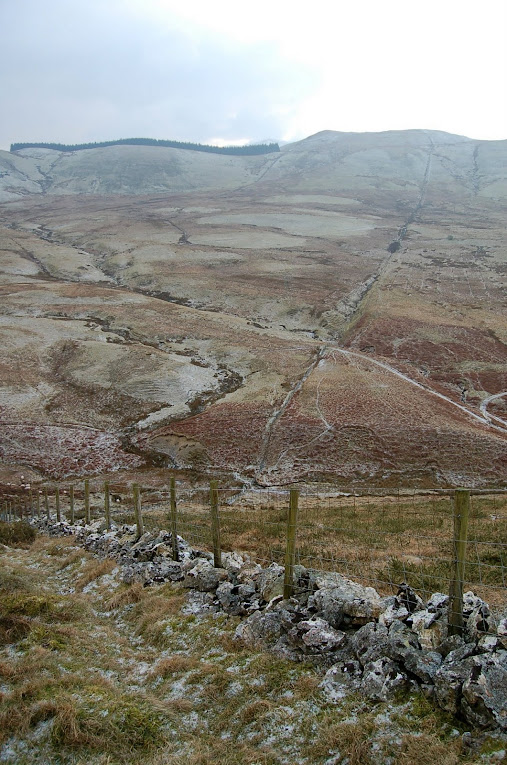 Traverse from Ling Fell to Graystones 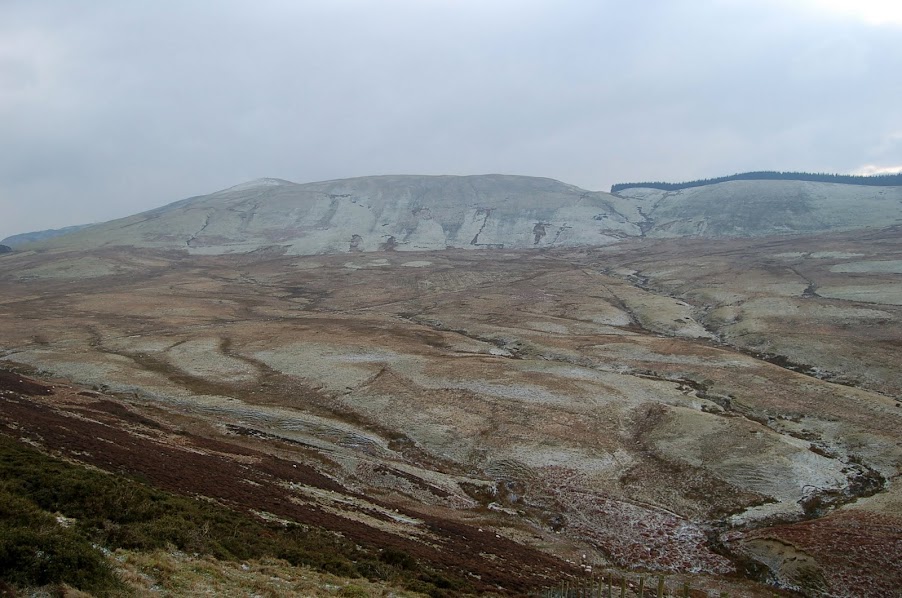 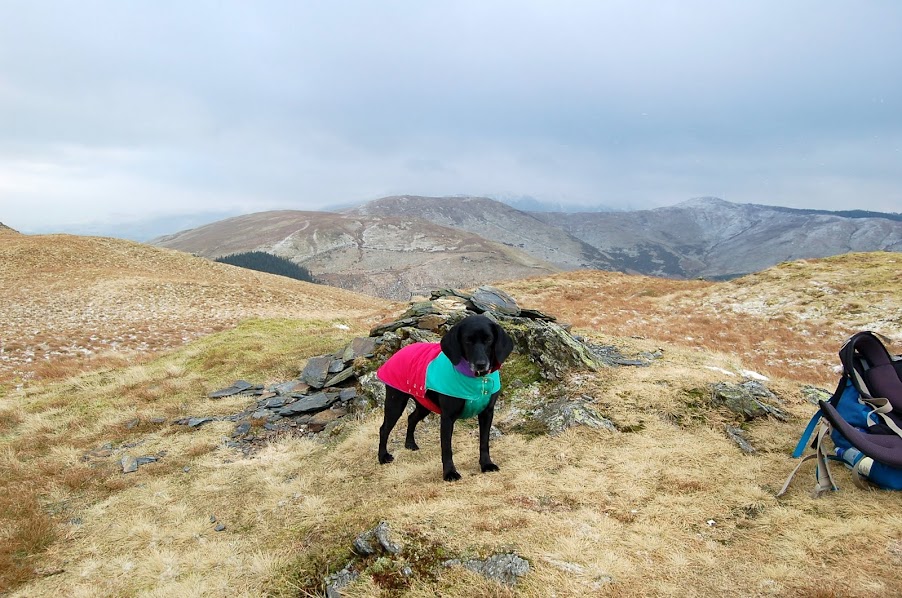 Off to find our 1st geocache next by dropping down off the top lump of Graystones down towards the little woods leading across to Broom Fell. Damson and I stopped for a drop of soup and some biscuits in the corner of the wood before the short ascent to Broom Fell. 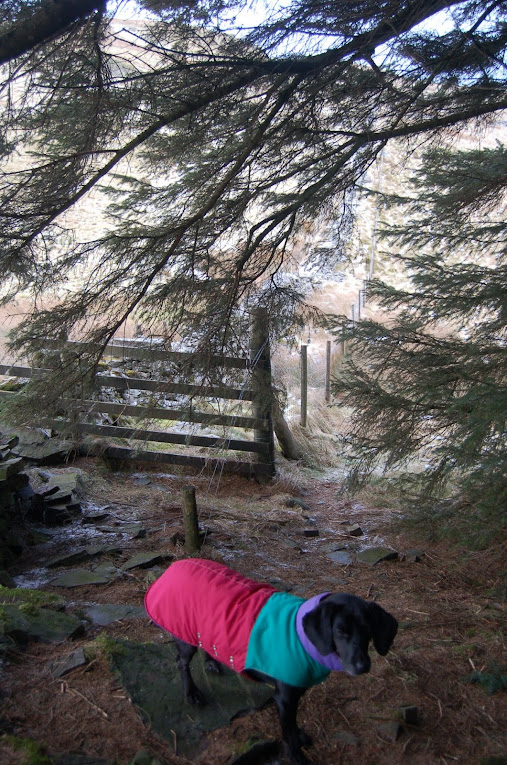 Damson stops for lunch in wood

The large cairn atop Broom Fell is not actually its highest point so we covered both to ensure the summit was reached. 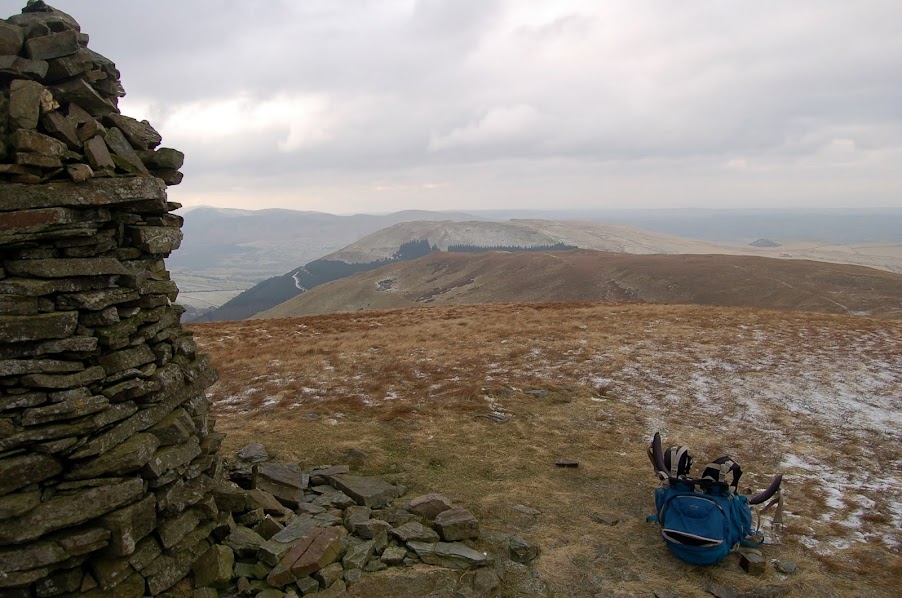 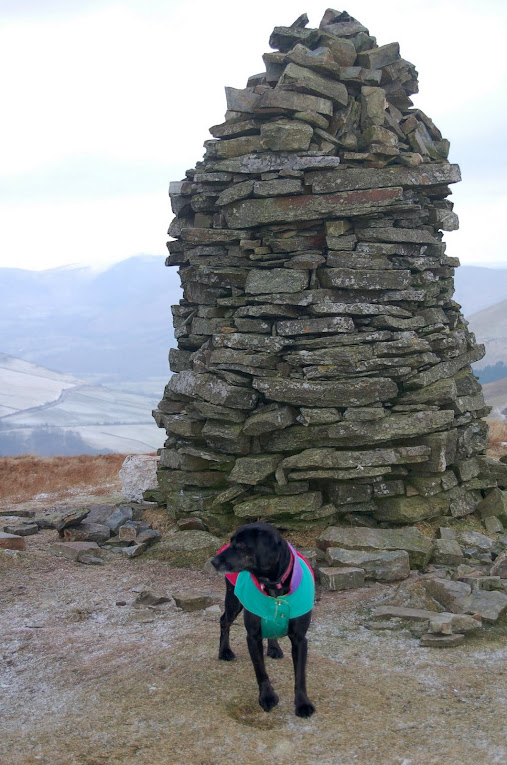 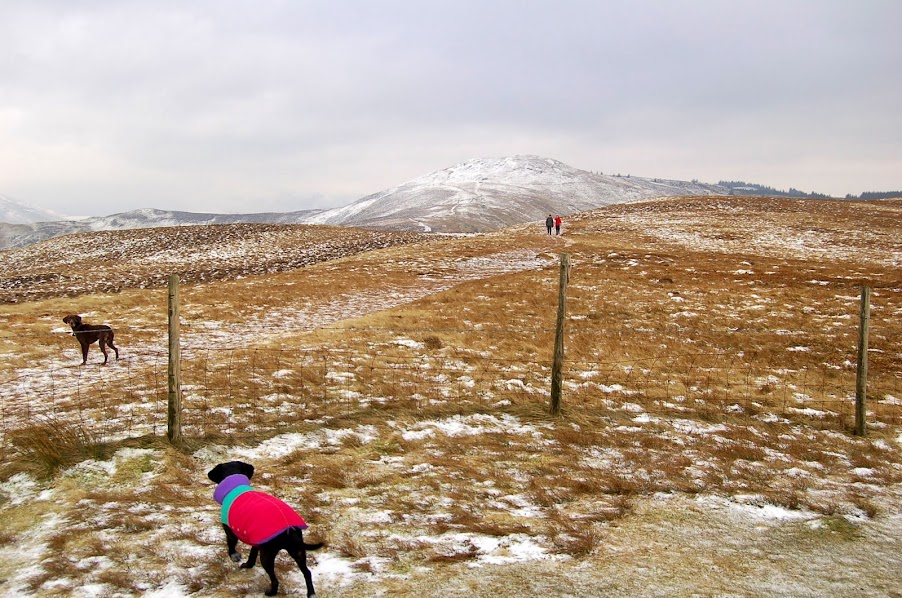 For those unaware, geocaching is a glorified treasure hunt using a GPS device to find pre-hidden "caches", small packages hidden in the landscape, at which small trinkets are swapped and a log is completed. These are then logged on a website on your return. There are millions all over the world and several hundred across the district.
I couldn't find the Broom Fell cache as the snow upon the ground on this summit had hidden the clues to it's destination as well as the cache itself.

So on to Lords Seat for todays highest point and a second geocache attempt. Close to the summit I found this cache and completed the log and swapped my little plastic trinket for a Xmas cracker Spinning Top. Geocaching is all to do with the hunt rather than the catch (as with so many things in life!!) 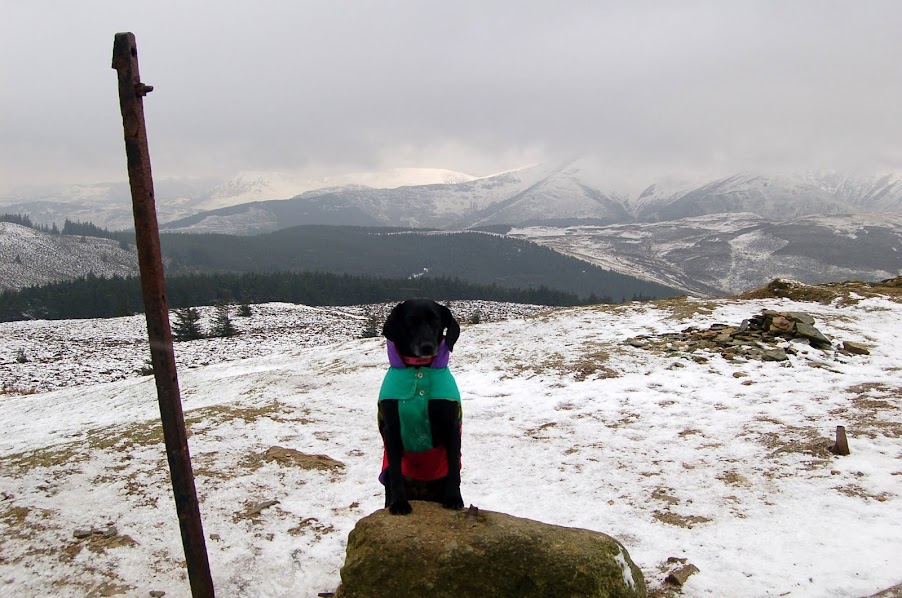 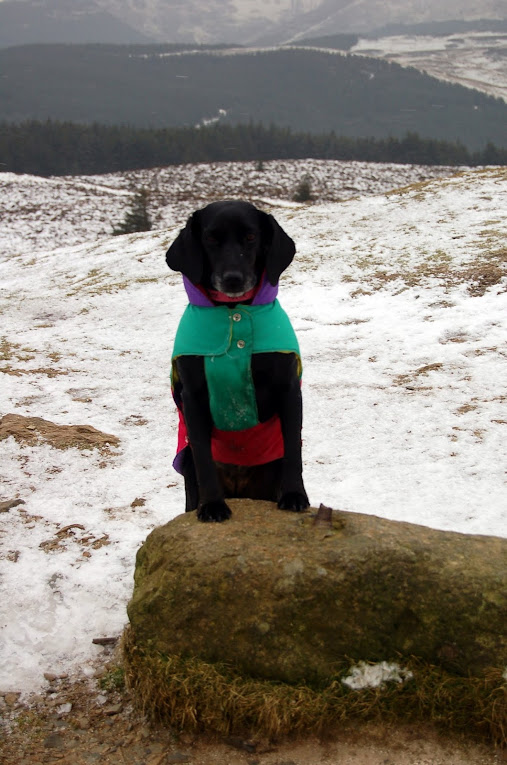 From Lords Seat we finished the traverse of the ridge across to the lump of Barf overhanging Bassenthwaite Water. Another cache was found here before turning round and the search for the track leading down the fell side towards the Wythop Wood and the final fell for today. 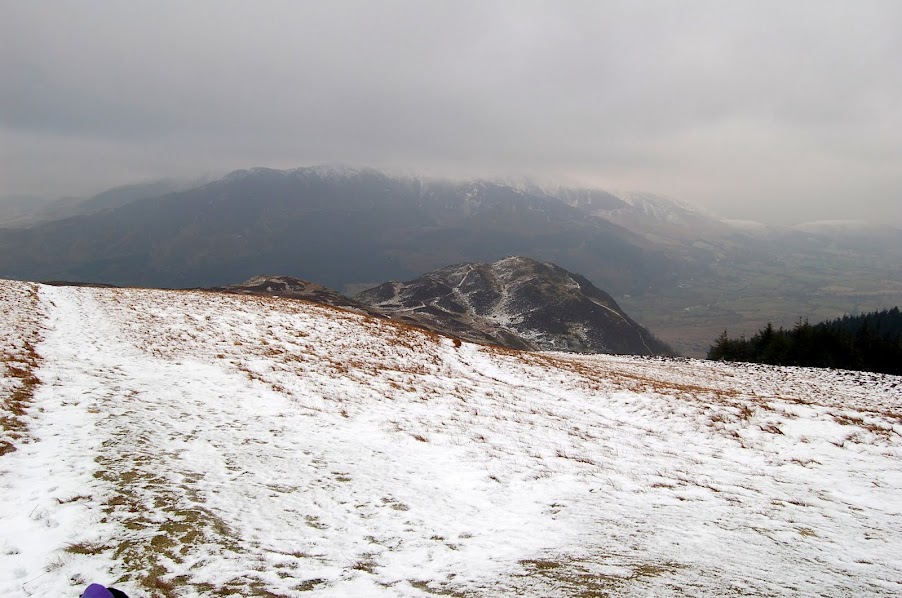 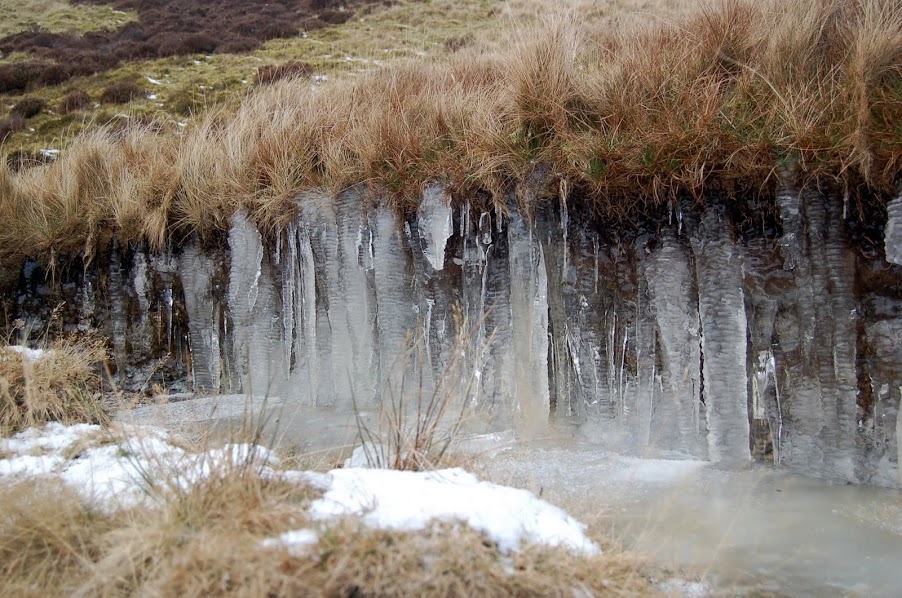 Icicles on way to Barf 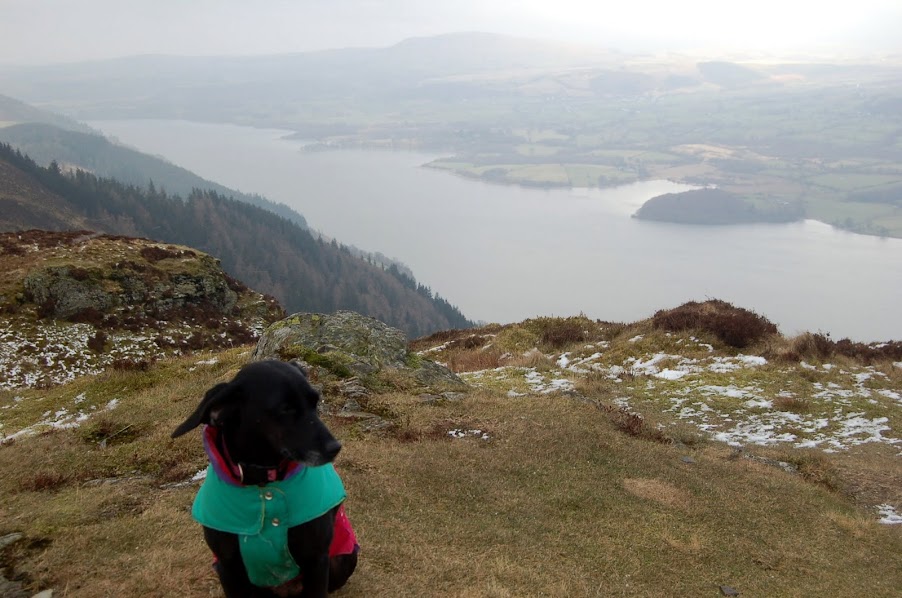 Damson on Barf above Bassenthwaite 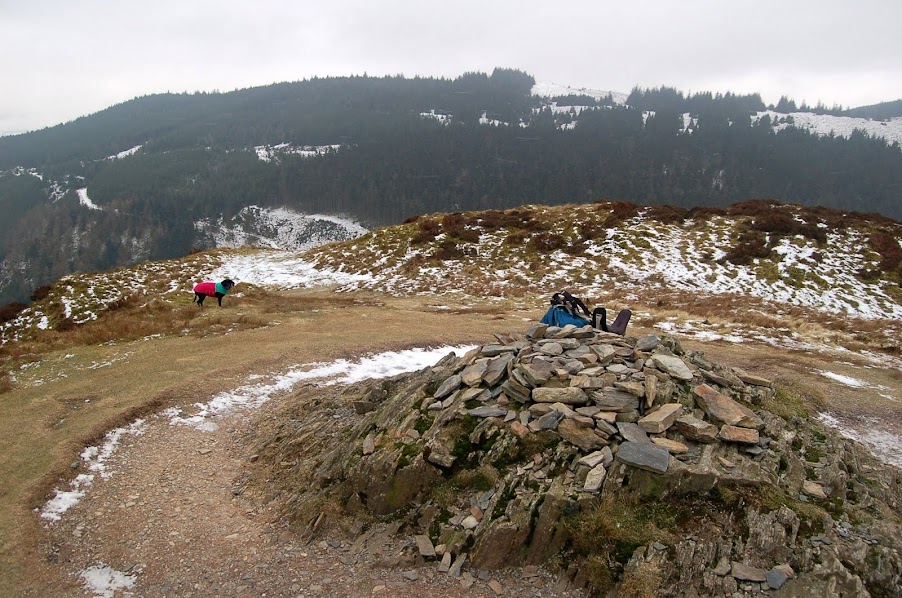 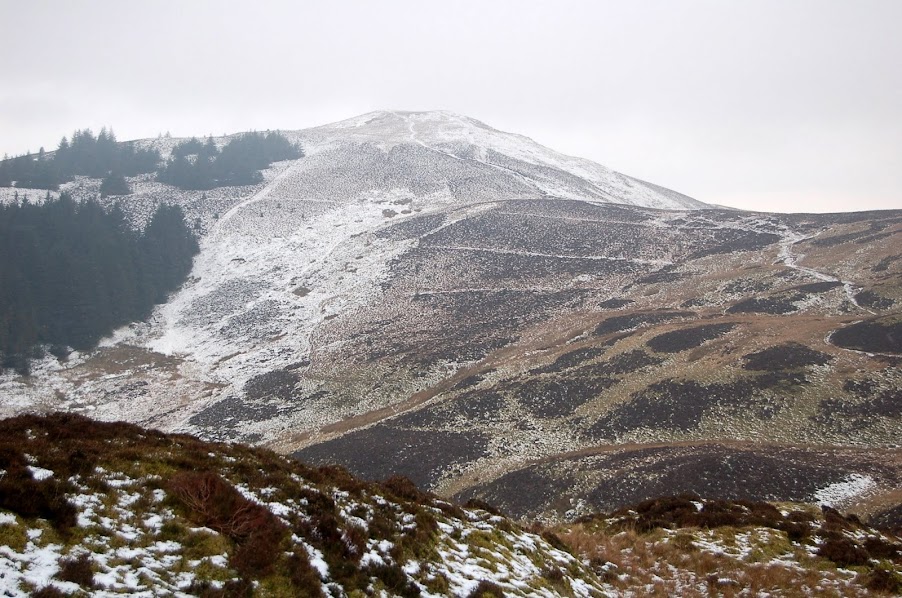 Looking back to Lords Seat from Barf

We struggled finding any path leading the right way and ended up doing a small amount of cross country before reaching a fence outlining an area of the wood that had been felled. We probably took the wrong decision by heading left to skirt this area but we eventually climbed over a very rickety stile and onto a woodland track heading into the woods.
My experience with the GPS device is limited and I ended up trying to pick up a none existent path when the GPS stopped working due to the cover of the trees. This was however soon rectified and the correct path was soon found. I chose the easier road route round the outside of the area known as Ladies Table before climbing back up a short path back to the base of Sale Fell.
The climb to Sale Fell was fairly easy and we joined a large number of other dog walkers on the trek up to the summit. 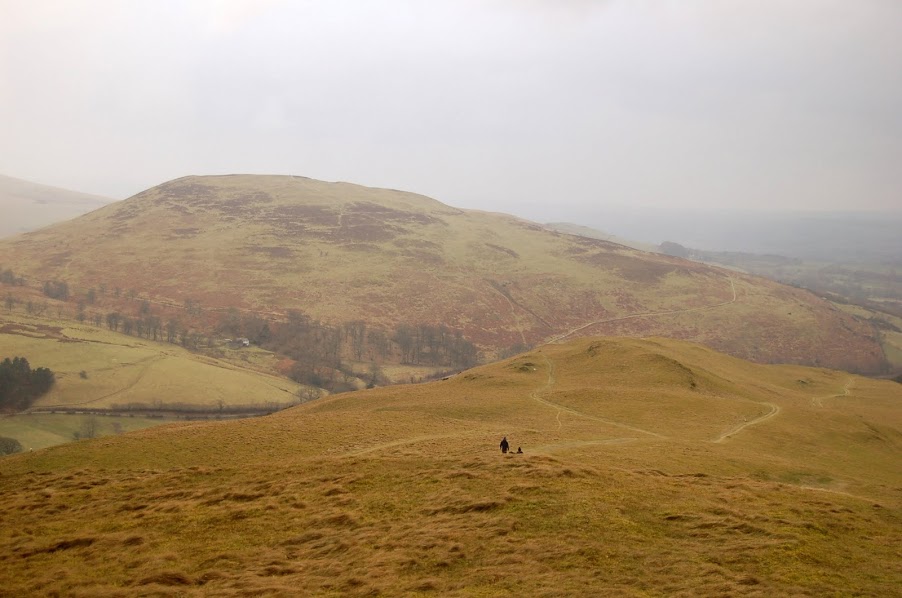 On top of Sale Fell looking across to Ling Fell 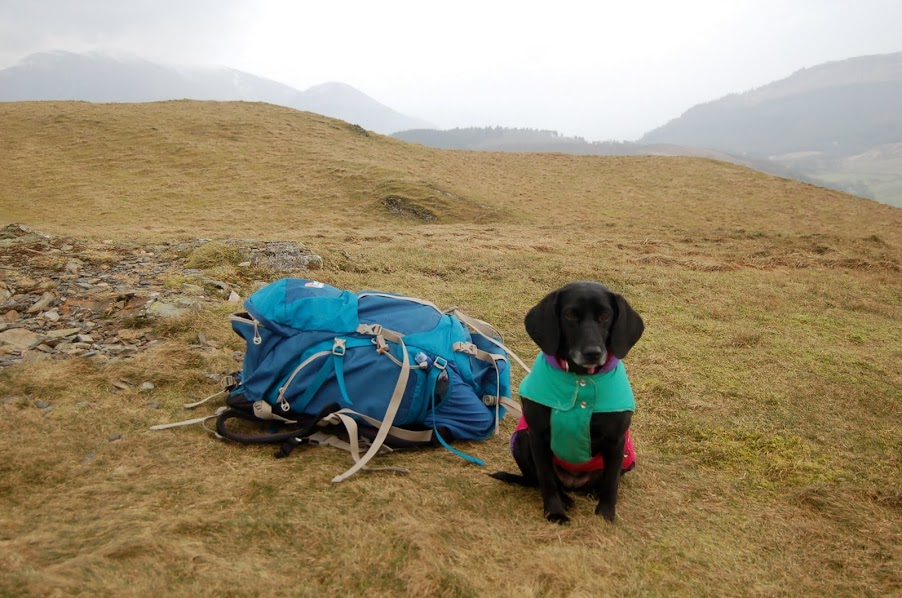 My last geocache took me in the wrong direction down the north face of the fell and onto a ledge below a large rock face to find my last cache of the day. Damson quite liked the look of a foam bee so we took that and left an old coin. We'd dropped quite a way to this cache so our trip back to the car followed another uphill drag over the western nose of the fell before dropping back to the river.

Although fairly long, this was a nice and fairly gentle re-introduction back to the fells to start 2013. My aim now is to complete the remaining 26 before 21st June in time for a Champagne Picnic with the multitude of friends and family that want to do my last fell top with me. With this in mind, I've chosen Rannerdale Knotts over Buttermere for my last as nearly all of them should be able to manage that one.

Check out the books mentioned in my blog. Set in the Lake District, he combines murder mystery with an appreciation of our lovely district and love of the fells.

Another great tale Phooooey, it's nice to see Damson out in her fancy coat stealing the limelight as always, good luck on making your June target - make sure you stay injury free until then

Great to read about your latest adventure, Craig, and the excitement of the geocache as well

No murder mystery then

Loved the photos, especially Damson posing in her coat of many colours, brightening up the gloom

If you wanted snow, should've headed east to the North Pennines and beyond!

Hi Chris & Susie,
Nice to hear from you again. Seems like ages since I've been on here last.
The snow has finally hit Dalton & Barrow tonight taking 1.5 hrs to travel back the 7 miles from work.
You shouldn't ALWAYS get what you wish for ...

Gives Damson another excuse to wear her coat though!

Phooooey wrote: 1.5 hrs to travel back the 7 miles from work.

A week later and the snow is back with a vengeance.
No fell walking last weekend as the car couldn't even get off our road due to the volume of snow that fell on Friday afternoon.
Went geocaching on Sunday to take my cache tally to 27.
Hope for better weather next weekend. Could be into the Buttermere Ridge fells.

Phooooey wrote:Hope for better weather next weekend. Could be into the Buttermere Ridge fells