The Sutherland hinterland - a flying visit

The Sutherland hinterland - a flying visit

Not really got off to a flying start on the hills this year - 20th of the month already and only my second walk. I think I've turned into a fair weather walker - I keep looking out for a good forecast then staying at home if it changes. As other folks reports have shown, there have been some good days this year - you just have to keep going out to get them.

I had been saving this group of hills for a more relaxed visit and a stay in either Glencoul or Glen Dubh bothy, but this weekend, it appeared that the entire country would be buried under snowdrifts apart from the far north. I had always considered Beinn Leoid to be remote, so was surprised when I measured off a route over the 3 main hills in this group that it wasn't a long day at all.

Beinn Leoid.gpx Open full screen  NB: Walkhighlands is not responsible for the accuracy of gpx files in users posts
This meant I could ditch the early start, so leaving the house at 8 am gave me a 9:45 start (as expected, the driving conditions were fine up here). While things were looking a bit greyer than forecast, most of the summits were clear, with the exception of Ben More Assynt.

My initial plan had been to head up Coire Gorm to get onto the high ground, but I realised that using the most common approach between West Merkland and Kinloch was slightly shorter without missing out on anything. The path was good and views opened up towards Arkle then Foinaven. After levelling off and crossing some moorland, the path ended and I opted for a slightly descending contour into Loch Dubh, picking up another path. Beinn Leoid and Meallan a' Chuail popped into view.

Looking towards Arkle and Loch More: 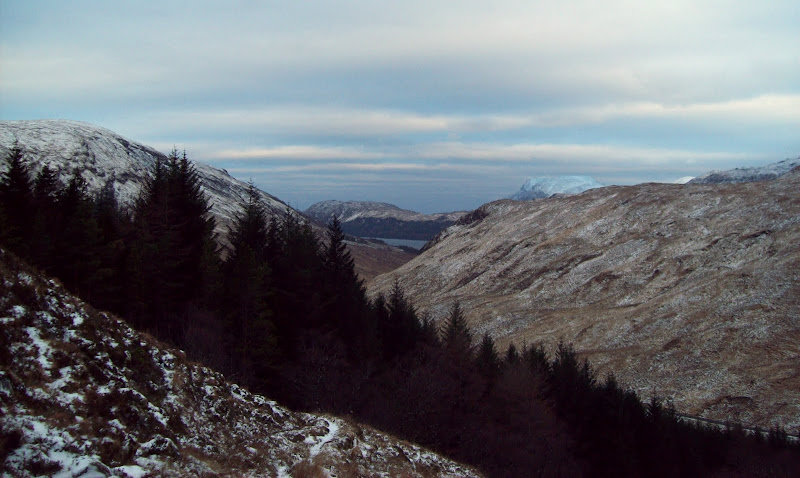 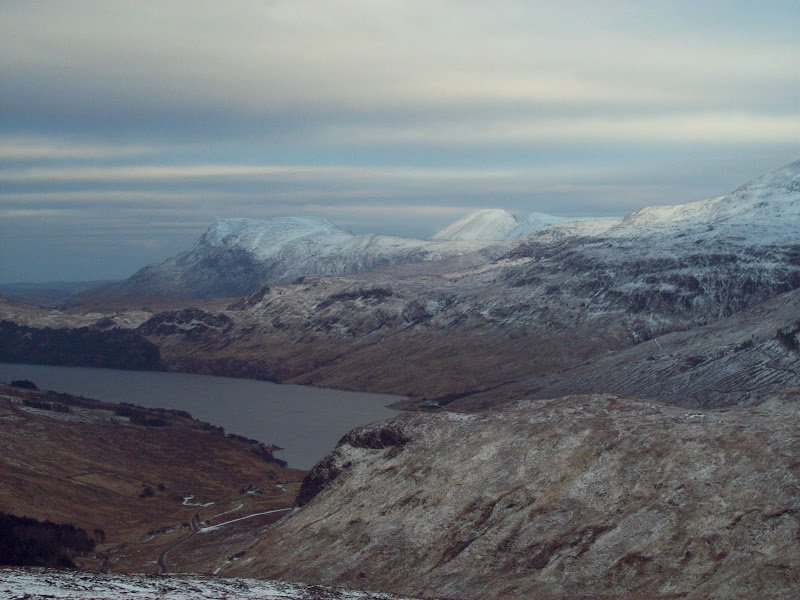 The ground here was a bit tussocky and I floundered in the snow in places, but it wasn't too bad. There were some interesting ice formations on the face of Meallan a' Chuail, and before long I was back on a path. This zigzagged nicely up to the col between Meallan a' Chuail and Beinn Leoid. 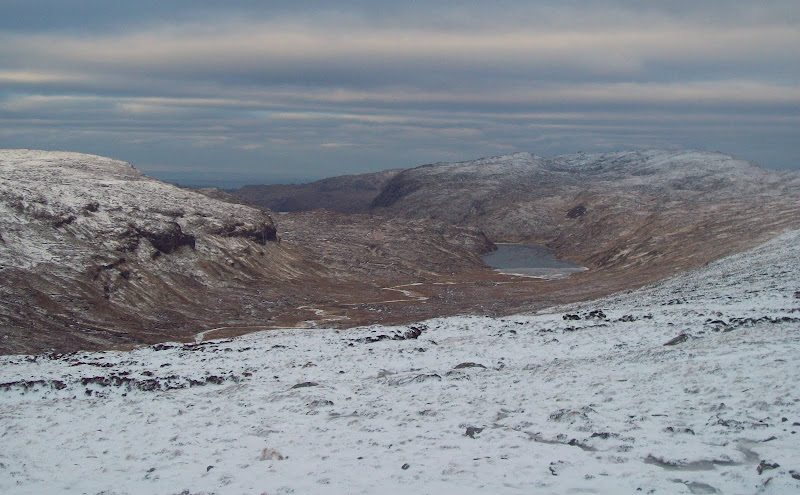 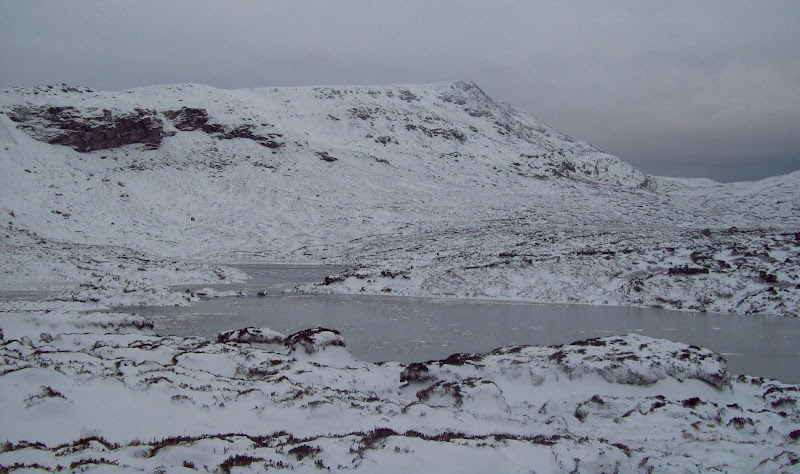 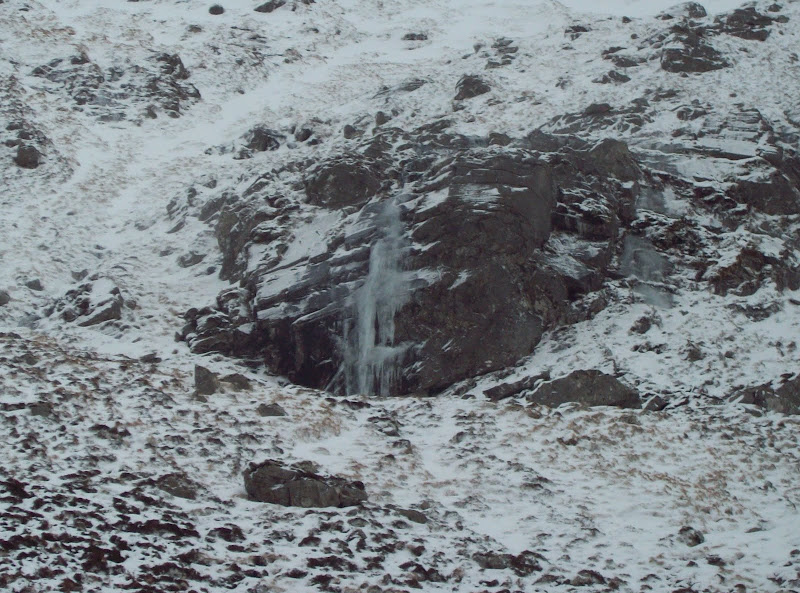 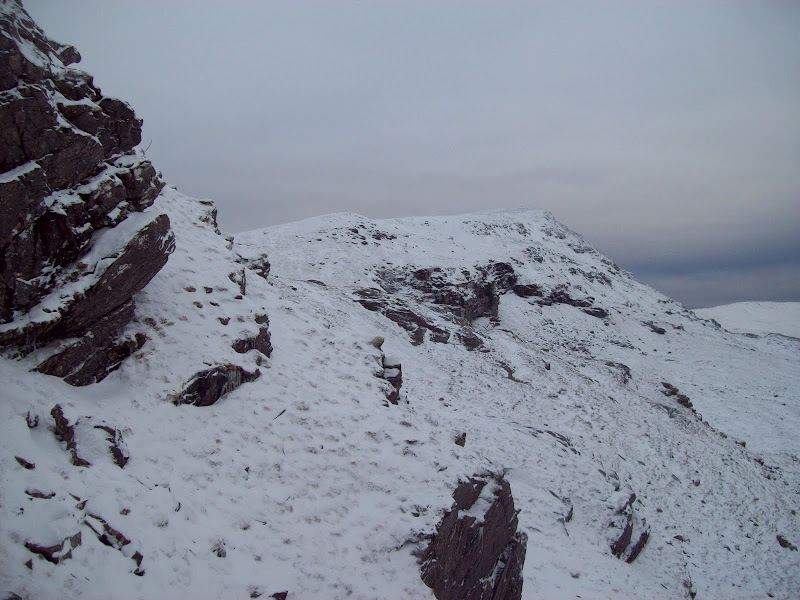 On the ridge up to Beinn Leoid, there were a few floundery sections lower down, followed by some snow covered rocks higher up. Trying to avoid falling into the gaps between these was entertaining, as they were filled with soft snow. The wind increased dramatically on the final pull to the summit, making standing at the top less than fun. I was able to get a little shelter in the lee of the summit cairn and have some lunch. 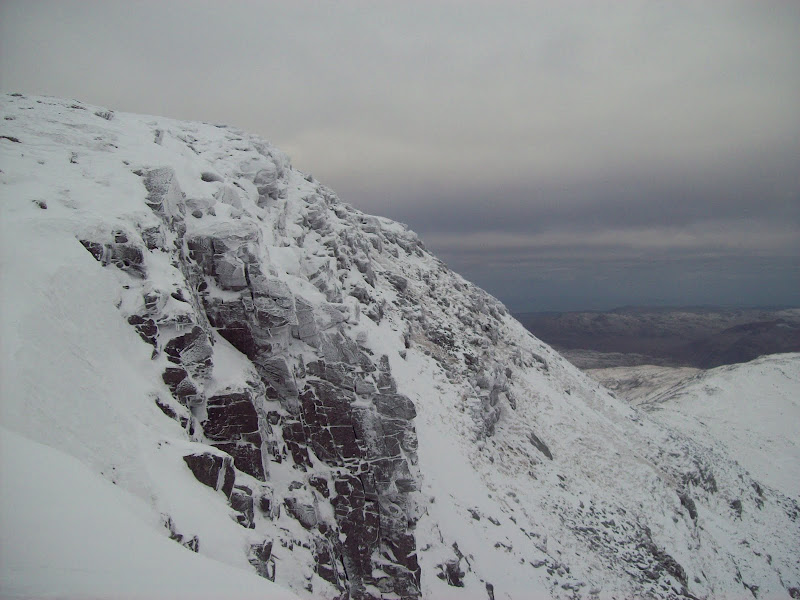 The views were not as good as they could have been on a sunnier day, but Quinaig looked impressive and I could even see Suilven. I could also look down onto the summit of the Stack of Glencoul, something I would have visited on the overnight version of this walk. Must try from the west sometime. Little of the widespread sunshine predicted by the weather forecast was evident, but a couple of shafts opened up over Kylesku. My camera was too full of moisture by now to snap them. 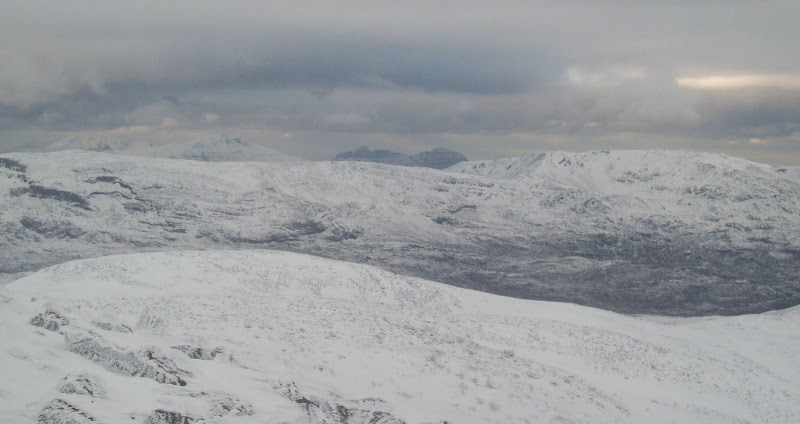 Out to sea across Kylesku: 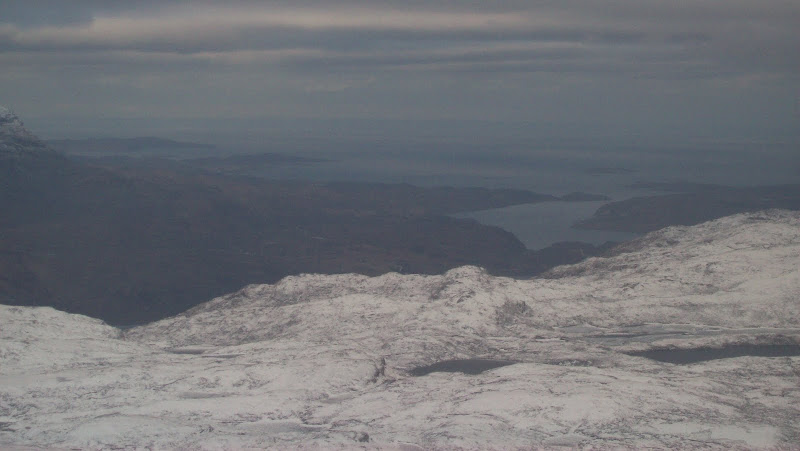 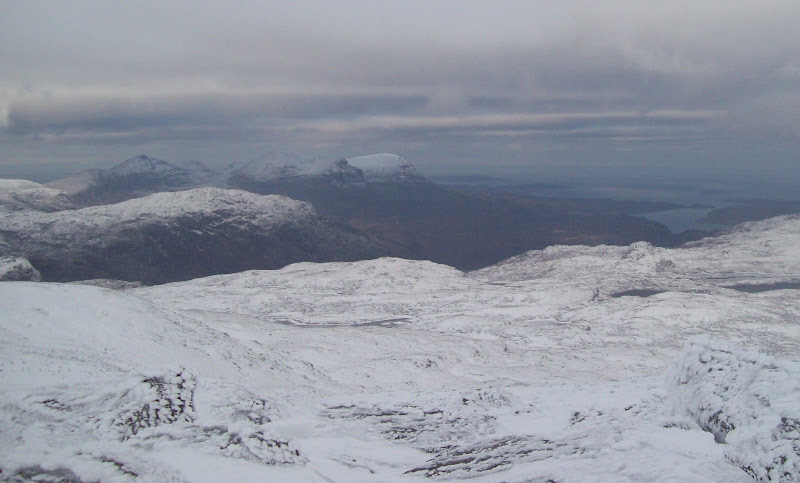 Arkle, Foinaven and Meall Horn from the summit of Beinn Leoid: 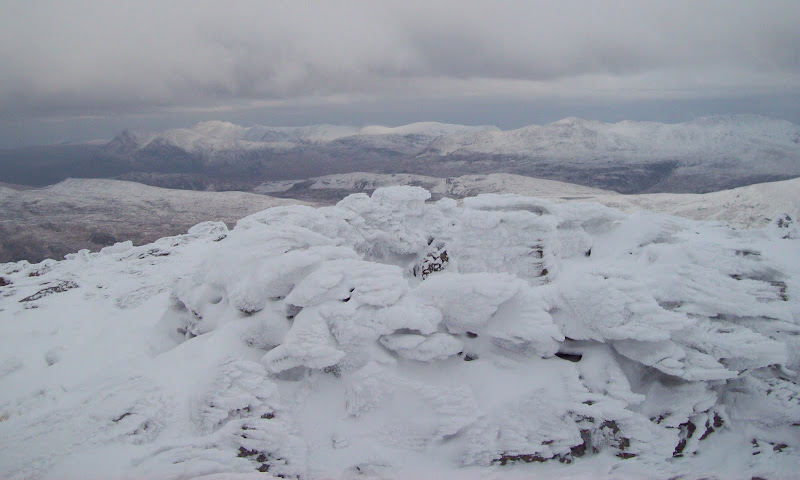 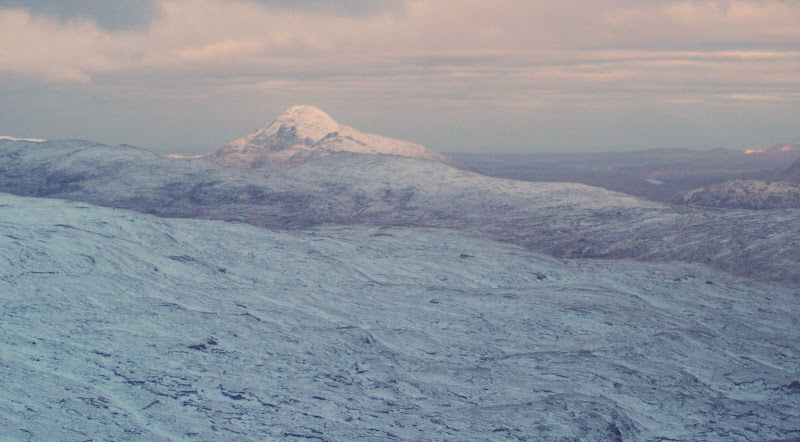 I retraced my steps after a few minutes - going down was less pleasant as I was facing into the wind, but much faster! The ascent up to Meallan a' Chuail was steeper, and much more rocky higher up. I finally spotted the cairn, and was rewarded with an impressive drop straight down the other side into Lochan Meallan a' Chuail. While it was breezy here too, I only had to drop a couple of meters below the cairn to get some decent shelter. Good enough for another break.

Arkle and Foinaven catching some sun: 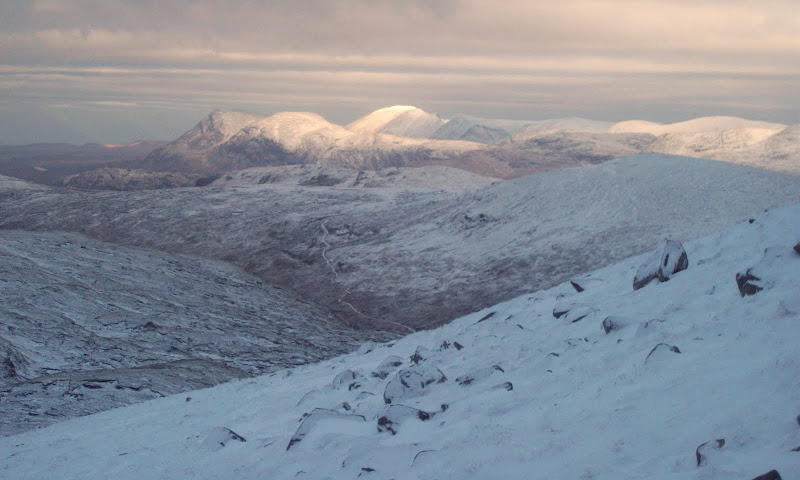 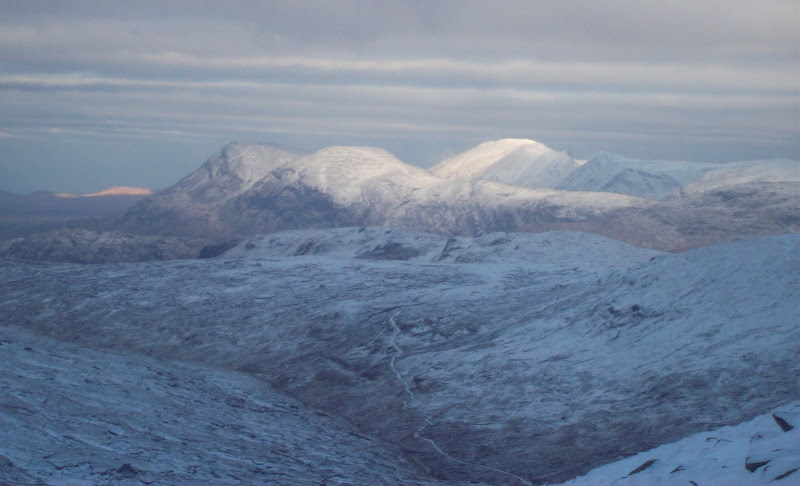 Meall an Feur Loch and Ben Hee from Meallan a' Chuail: 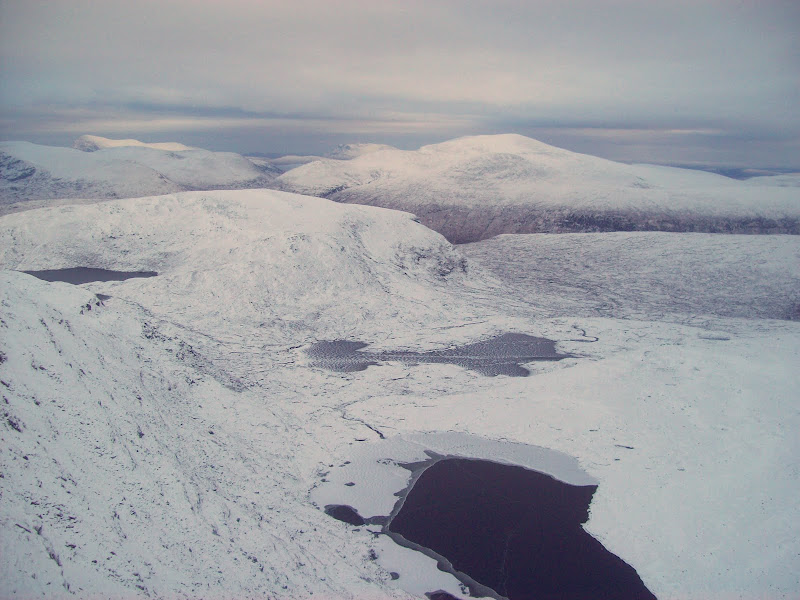 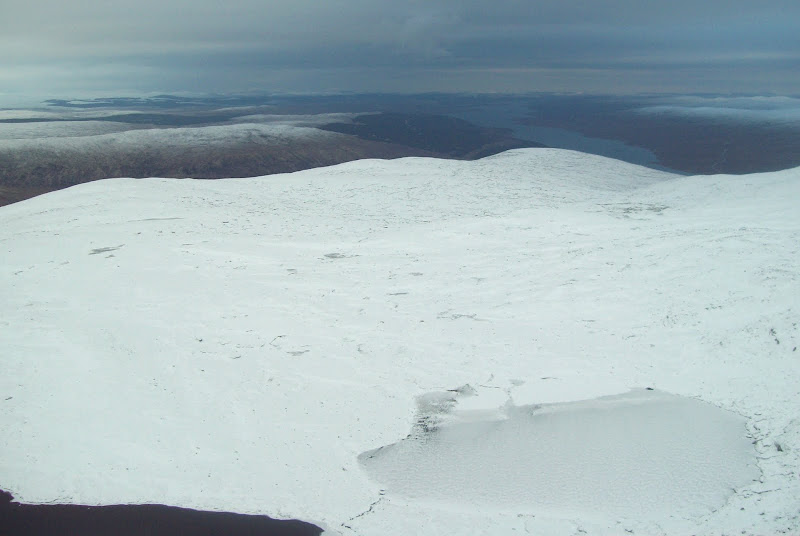 The descent was also quite rocky, with more care needing to be taken to avoid twisting an ankle in a hidden gap. All the way down the views back to the summit were impressive. Meallan a' Chuail is actually a more interesting hill than Beinn Leoid, with multiple lochans at different levels. The only thing it lacks is a good view of Quinaig, as Beinn Leoid sits directly in the way. 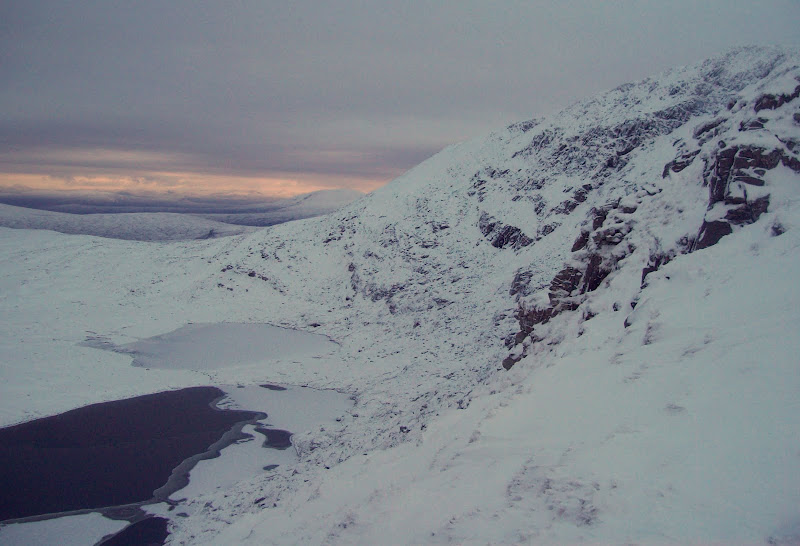 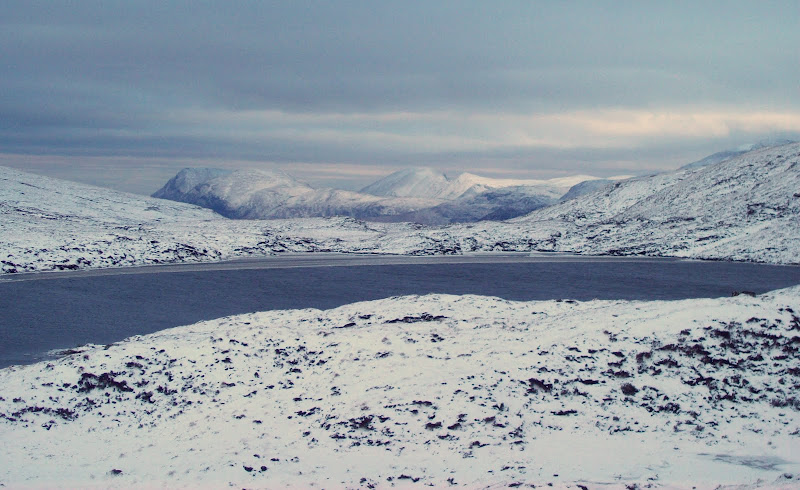 Onward to the third hill of the day, the much less imposing Meall an Fuar Loch. I hadn't realised this was a Graham until 3 or 4 years ago - in fact a friend had made the same omission and missed it out when he had done this walk back in 2006 or 2007. 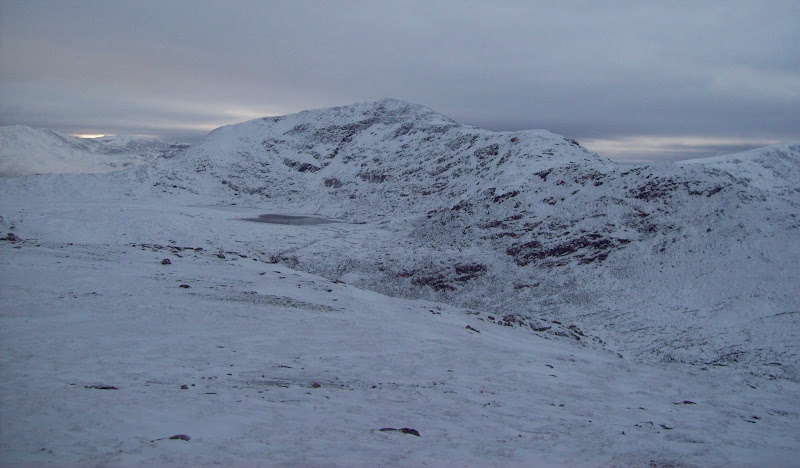 Meall an Fuar Loch adheres to the inverse law of importance when it comes to the summit cairn - it is quite substantial! From here there were good views to Meallan Liath Coire Mhic Dhughaill, Carn an Tionail and Ben Hee, which I had done on a similarly snowy but worse day in 2010 (plus Beinn Direach, which hides away from this angle). Also the ever-dominating Ben Stack. 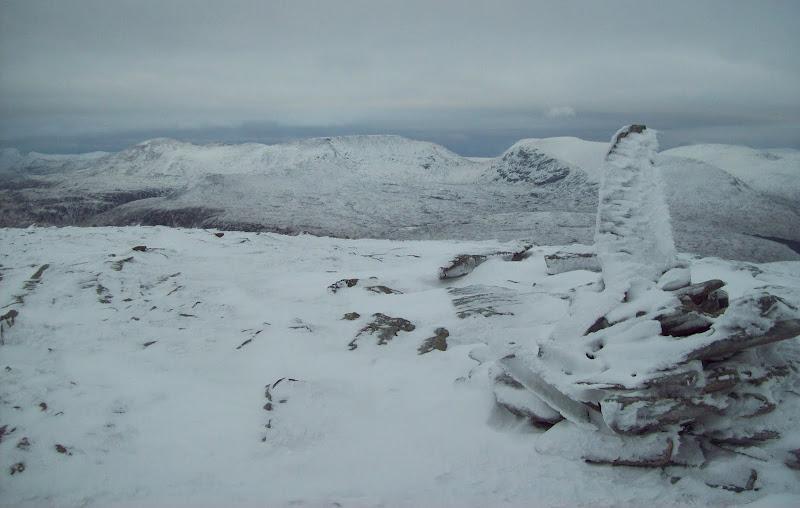 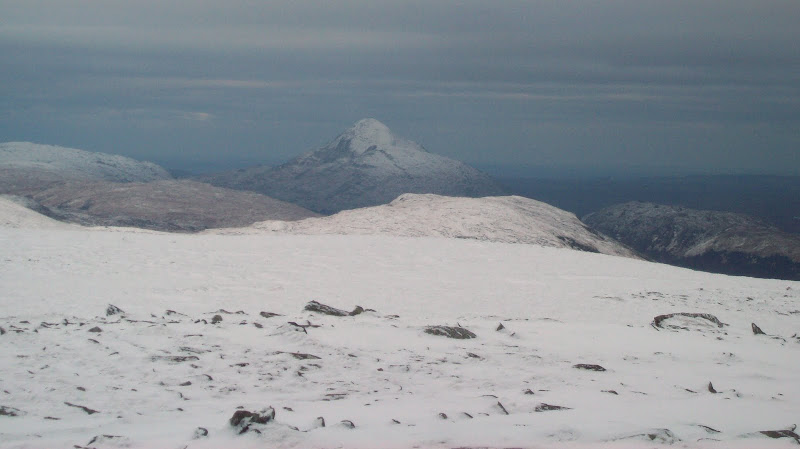 On the summit of Meall an Fuar Loch: 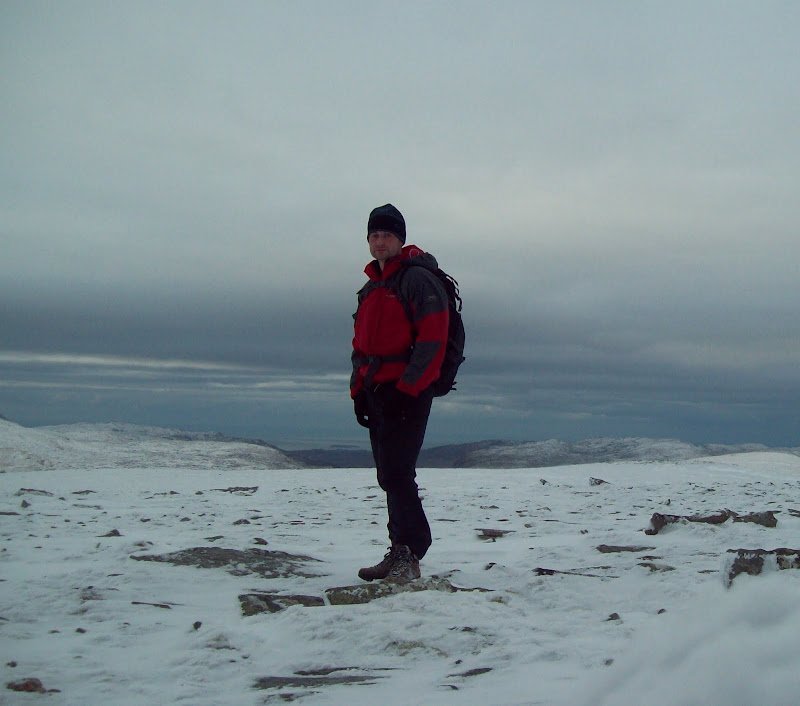 It was a pretty easy descent to the stalkers path that I'd started up, and there were good last views to Quinaig, Beinn Leoid and Meallan a' Chuail, with another glimmer of sunshine behind. I passed a rather conspicuous pair of Black Grouse on the way down. 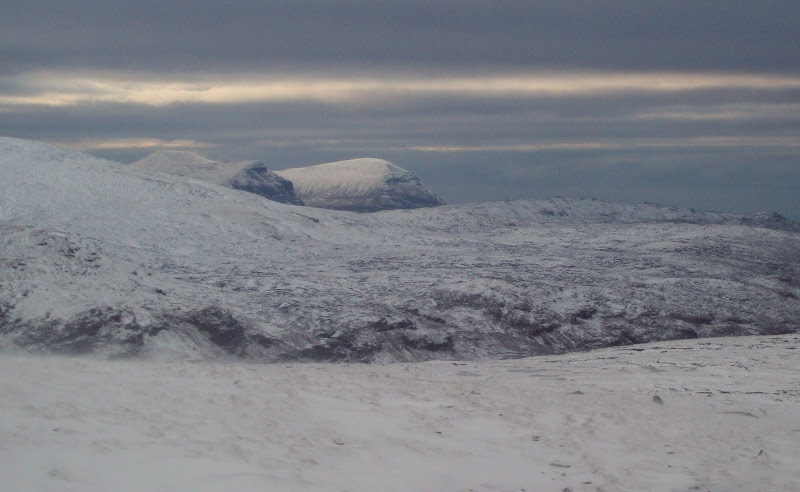 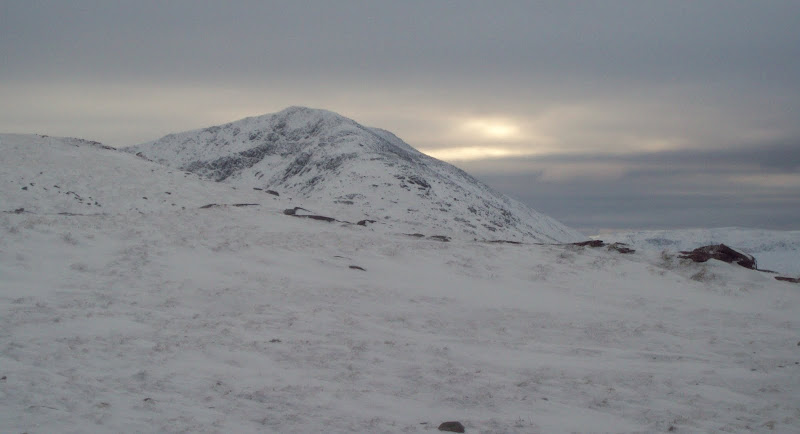 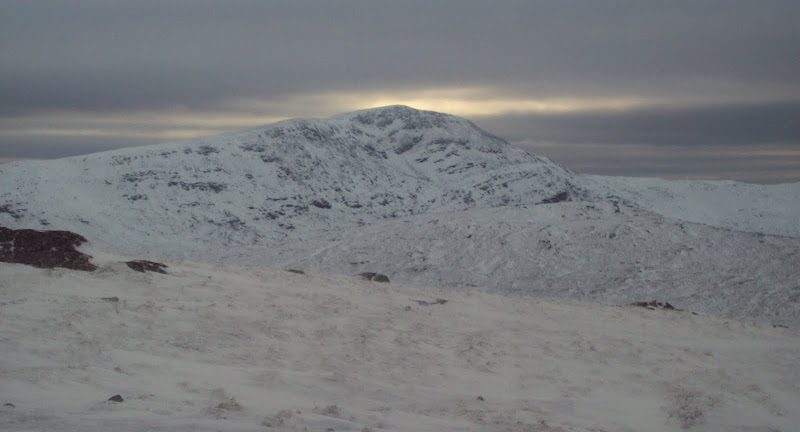 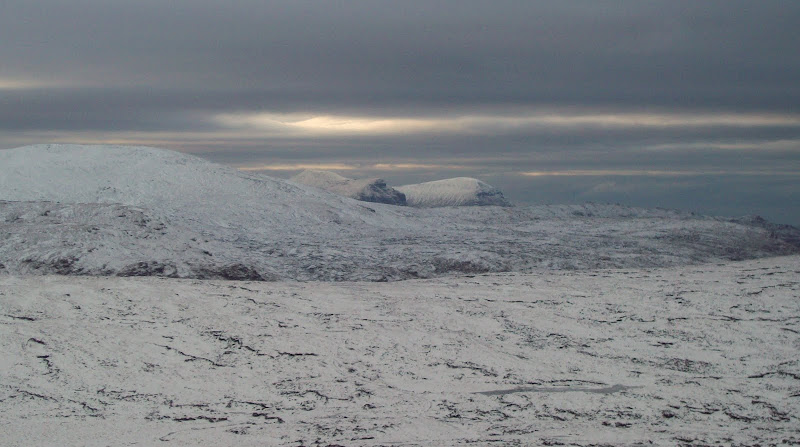 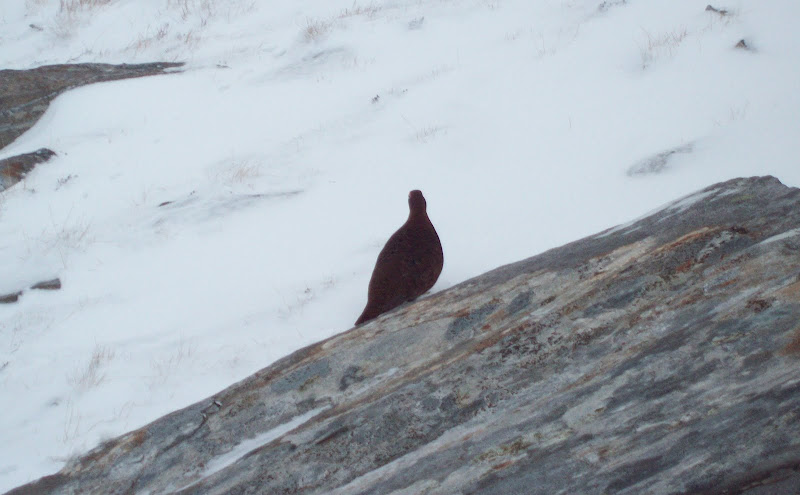 All that remained was a quick retracing of my footsteps back to the car, watching out for some icy bits on the path. I had another break once down out of the wind and admired the views across Loch More. Then home.

Looking back at the stalkers path from the road: 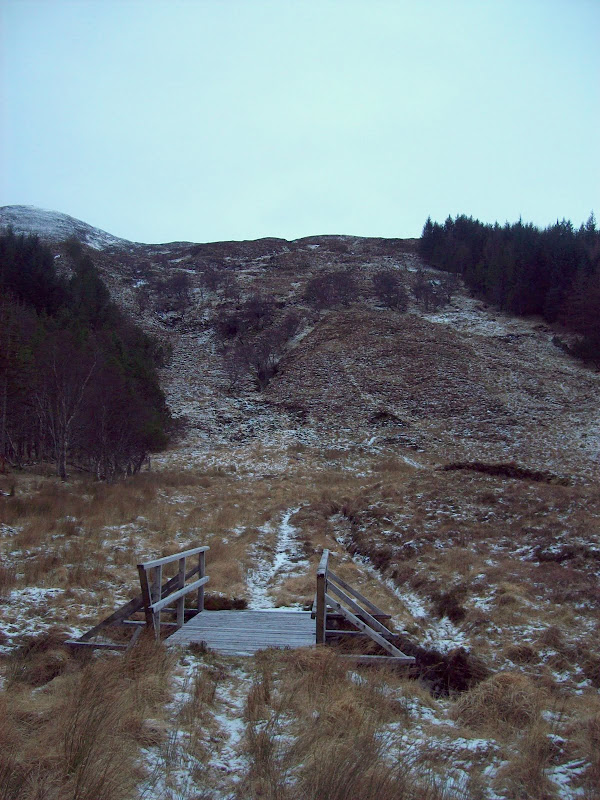 I'll be back for my overnight visit to this area one day, but that was an enjoyable quick visit for now

that would be a day hike for me mate

Great report with some lovely shots of the winter landscape, even with those looming clouds. It must have been cold...that's the first time I've ever seen you without your shorts, great day

We shall be there in October for a week and really looking forward to it!!

Great report; enjoyed reading it and your wonderful pictures! The grouse should have stayed off the snow

We enjoyed our visit a few years ago.....two and a half days in S.......to these tops. On a clear day the viewing was near perfect with the additional delight of finding some white Loiseleuria on the summit area of meall an fheur loch but you will have to return in early summer to witness these.

It must have been cold....no shorts!!!
I had a great stay in Glencoul Bothy whilst doing Beinn Leoid, we took the tourist boat that sails up the Loch to view the falls, but as there is no jetty near the Bothy the skipper had to get as near as possible to a rock outcrop and we then had to jump for it!

And the same coming back

A note on Glenbeg Bothy from the MBA website....
"Intending users should note that the Association is no longer maintaining the building at Glenbeg in the Northern Highlands as an open shelter"
No mention as to if it will be left unlocked by the estate.

The Far North looks stunning in the snow, especially half-frozen lochs. There's very little info on routes to Beinn Leoid so thanks for this one. Having climbed all M and C hills on the western side of Assynt, Beinn Leoid is on my "to do list".

We were in Torridon on the very same day, similar conditions, even some sunshine and blue sky in places... At last some decent weather

. Spend a bit of time up that way over xmas including a cracking day on Ben Hope and can't wait to get back

. Your's is a route I will have tackle some day, cheers

Lovely, not a bad bag that, and shorter than I would have imagined as well, must bookmark...

We really enjoyed this report - it's so unusual to see photos of this area. These are wonderful views - very different from what one normally sees, and we loved your pictures with the distant sunlight, and the views of Ben Stack. We thought about heading that way when we were in Inchnadamph last summer, but didn't really have the weather for it. (We did manage to get up Ben Stack the previous week though).

All relative I know, but I thought it would be at least a 9 hour day for me in the summer, so was pleasantly surprised

BlackPanther wrote:We were in Torridon on the very same day, similar conditions, even some sunshine and blue sky in places...

Maybe should have gone there instead. It didn't look any better from where I was but your photos definitely look more sunny than mine!

You picked an excellent route and described it well - in words and pictures. I'll aim to do this myself in the next few months.

Wow - views of the top of Foinaven! It's always been in th cloud (including the day we tried to climb it) when we've been there in the summer. Lovely to see this part of the world at another time of year ... I'm very jealous!

Had some good holidays up here in my younger days but have hardly been back since (need to rectify that now) - an interesting route, looks great in the snow despite the overcast conditions - won't be long before you're back in shorts no doubt - cheers