When my wife asked what I wanted to do for my birthday this year she didn't seem too impressed when I said I was going to Scotland with Neil, even less so as the date drew near and the weather forecast was looking pretty grim. However, as I had booked the Friday off from work and booked the accommodation I was pretty set on making the trip.

It was only going to be a short trip so we decided to base ourselves in Crianlarich and look to do a few of the remaining summits in the southern highlands - the plan was to leave early on Friday so we could arrive in time to do one peak in the afternoon. Although I woke up to snow on the ground there didn't appear to be any in the air and that was the case all the way north; indeed, we set off from Glen Lednock just before midday in beautiful sunshine. Neil heading out from Glen Lednock Heading up the track to Ben Chonzie

As we gained height the wind picked up and it was bitterly cold, increasingly so as we gained the summit ridge, where we picked up the old fence (now covered in show and ice). At this point it would have been wise to pause and put on some extra layers, but a touch of summit fever saw us pushing on - I guess hoping to cover up once we got into the shelter of the summit shelter. However, the windchill cut through my mid-layers and I felt the cold setting in to my fingers, and worryingly, my privates. I wasn't to worried about my fingers as I could put them under my armpits, but I couldn't do that with my other cold bits and I thought it would probably be stretching our freindship if I asked Neil to help

Disappointingly the wind was blowing straight into the summit shelter, so we crouched down outside it to wrap up and take a quick picture, before heading back. 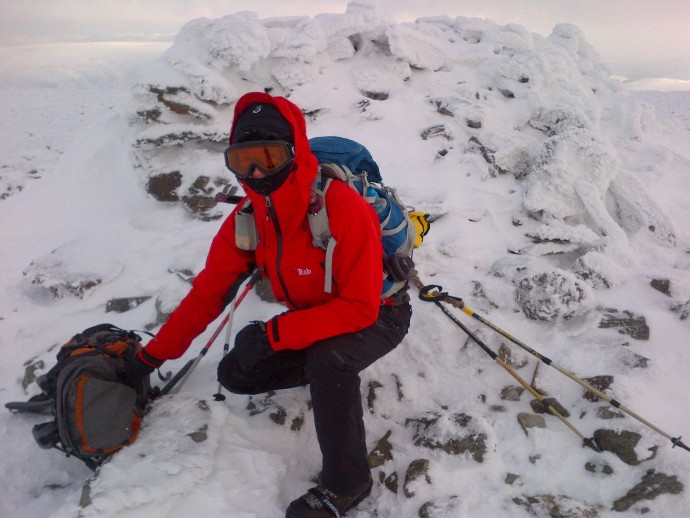 From one January birthday boy to another,
A reminder for next time yer up here on yer birthday!

Another good one S7 and against all the odds the Met Office stacked against us and like minded souls.