Beating The Bog and Crags on Heasgarnich and Creag Mhor

Beating The Bog and Crags on Heasgarnich and Creag Mhor


The Second Munro Meanderers mini-meet of 2013 took us to a pair of hills that are centrally located for all of us. The Mighty Muck Heap knows as Beinn Heasgarnich and it's rocky pal Creag Mhor.

Quoman and Rottie had been out the week before and ticked off Creag Mhor, so they would be joining myself, Scoob, Fiona, Tomsie and Brian for just the one hill.

We chose to almost exactly follow Gavin99's route, but in reverse, so that Quoman and Rottie wouldn't have to repeat Creag Mhor.

We parked up just short of Kenknock and were out and walking around 9am on a gloomy Saturday morning.

Walking on a tarmac road a junction is soon reached and we took the right hand turn, the so called High Road. This immediately winds it's way fairly steeply upward until another junction with a gated stoney track, near the point where the hydro pipeline disappears into the bowels of the hill.

From the High Road there are good views back up and down the glen.

After a little while we passed an abandoned all terain vehicle and shortly after this we reached the dam above Badour, where we would turn off and head uphill.

You can see in the background of the vehicle shot that the road has been swept away in all the recent rains, leaving only a narrow and rather shaky footpath-wide section of road to tiptoe across.

The sight leaves you no in doubt to the power of water and the damage the flood has done looks considerable, almost all traces of the road completely gone and washed away downhill, as well as a good chunk of the hillside.

From here we followed the now, thankfully, passive burn upstream for a short while before taking a bearing aiming, just left of the crags labelled Creag na h-Achlaraich. The steeps slopes eventually gave way to some flatter and mildly boggy ground, though this was almost entirely frozen as we made our way past.

The clag was also closing in as we made our way higher and the views behind became more limited and then non-existant.

After crossing some patches of hard packed snow ice, it was time for one last steep trudge up the side of the hill.

But in the clag we had aimed for the slightly shorter of Heargarnich's two peaks (1027m) so the celebrations were cut short as we crossed the gently sloping plateau to the higher one at 1078m.

For Brian it was number 75 and just as I went to take a celebratory picture... iPhone said no! MEMORY FULL. Well in gales and a severe windchill I wasn't for taking the time to delete stuff!!! So from here on in, I hope some of the others can add in more pictures!

We didn't hang about on Heasgarnich's summit, it wasn't the day for that and we were behind schedule to get down Creag Mhor before darkness set in. Quoman and Rottie headed back down the way we had ascended, their mission complete. The rest carried on towards Creag Mhor.

By this time there was a decent path heading down Heasgarnich's side which we picked up and it soon brought us over the outlier peak of Stob Fhir-Bhogha and then below the snow line and then the frost line and we took the chance of shelter to grab a quick bite to eat and a cup of coffee.

The bealach looked awfy far down below, indeed over 400m of height must be lost down the steep side of Heasgarnich known as Sron Tairbh. The bealach was also shining, the weak sunshine reavealing just how much water was lieing down there.

As it turned out the bealach was easily crossed, it wasn't half as bad close up as it looked from above. I was amazed that I had conquered the Mighty Muck Heep Heasgarnich and my gaiters weren't even dirty! Now it was time to gain 400+m up the sides of Creag Mhor!

The steep ascent and descent had taken it's toll on me and Brian though. He felt he wasn't able to continue, whereas I managed to slog on. After much debate and a bit of soul searching Brian reassured us he'd be OK walking along the bealach to the dam above Batavaime. The rest of us plodded up hill. It wasn't an easy descisions to leave Brian, so don't anyone think we abandoned him. He was adamant he would be OK and had all the proper equipment and his walk would be along more or less flat terrain to reach the dam and then a good track back to the car.

The rest of us knew we could do the hill, so we marched upwards and onwards.
Creag Mhor is well named, it is full of big steep crags and we made our own route up through them. The path lost down in the bealach. A big ice field loomed in white on light grey, barely disearnable from it's surroundings. Crampons on! My first time walking with them... good practice. Scoob made sure they were on OK and the rest opted for microspikes. Ice field conquered! As soon as we were across though we had to stop to take the spikes off as we had to cross a small boulder field. Five minutes later we were at CM's summit and the weather still wasn't any better!

Thanks to Fiona, I have one last picture. Me with white frozen hair on Munro number 40.
(Forty munros since April 2012, doing not too badly

It was nearly dark and we were still at the top. All haste was made down the ridge, once again on a good path. However we either followed it too far or not far enough.. hard to tell in the claggy gloom. When we could just about see the track homeward down below.... we were standing at the top of a huge crags... no this wouldn't be an easy descent.

Head torches on and with Scoob and Tomsie acting as path finders we somehow managed to trek back uphill and around the top of the crags, finding a steep, wet, grassy slope, that with a few twists and turns to avoid more crags, eventually made it's way down to the dam above Batavaime.

From here it was a long trudge along the good track, back to the point where we had left it hours before and then finally past Kenknock and back to the cars.

At the end of the day, it was two tougher than expected but, less than stellar hills bagged and most of the infamous boggyness avoided. Strangely satisifying in a peverse, we conquered all, sort of way.

Also, much thanks to Scoob, Fiona and Tomsie for the patience with me as I was a good bit slower than them.

Here's some of my pic's some of the troops 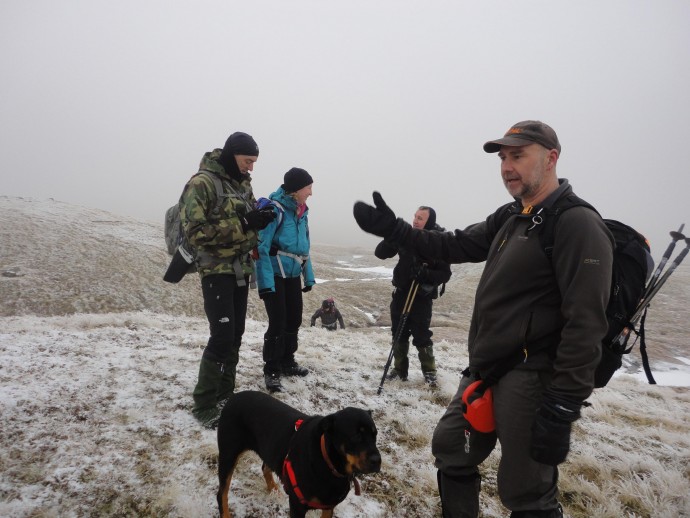 Well done on reaching the 40

, a long day out for you,s that one. and not as mucky as i was expecting

Congratulations on 40 Munros, thats nearly one a week over the past year

Well done to the gang! These two are tiring even without the snow and cold. You got some nice pictures despite the clag. climb up, even this wasn't too boggy next target, across the bog and into the clag :D Just read report 3 before getting to this, report 2. Am starting to get really jealous of you lot of meanderers getting out and about.

looks like you had another enjoyable trip - one consolation I guess for those of us stuck indoors....I see your views were about as good as mine

Here's my video link for the day