The Good, The Great and The Gairich

The Good, The Great and The Gairich


Gairich, should be a new adjective in the Scots language for something utterly sublime, completely awesome and fantastically magical. We may not have gotten the views from the summit, but Gairich gave us everything else. Perhaps the wee spot of clag at the top was Gairich's way of making sure our boots will one day be blessed enough to walk up this mountain's marvelous slopes on another occaision.

The Munro Meanderers third meet of the year was a long time in being organised, but eventually we settled on Gairich. For a while, Gleouraich and Spidean Mialach across the loch were in the frame, but in the end Gairich won out. On paper wee Gairich might not seem like it's a great mountain. At 919m it's only 5m above munro height, it's slopes aren't that steep, it's lowest slopes are a muddy marsh and it has plenty of other hills that are bigger, tougher and higher nearby. It's almost a 4 hours drive from the central belt, even from Fort William it's a 90 minute haul, the last 10 miles or so down a narrow single track road. Few of them will match Gairich, against all the odds, it stands with the best of them all.

We parked at the laybys on either side of the Quoich Dam and were out walking minutes after 9am. The wind cutting right through us as we clambered over the padlocked gate onto the dam itself.

At the other end of the glen, Ben Tee was doing it's best to compete and to be fair, it also looks a cracking hill from this distance.

After the dam the ground would be muddy rather than boggy and there is no option really, but to cross it. Thankfully on our cold January morning it was all frozen. Another present.

As we wandered on towards the plantation and the spot where we would leave the path and make off up the good track uphill, the sun caught Gairich's upper slopes, highlighting them in their brilliance.

The climb begins and although the path was icy, easy progress was made up the moderate slopes. The view ahead and to the right brings another, though quite different, mountain, Sgurr a'Mhaoraich into view.

Higher still and soon Loch Quoich comes back into view and with the sun shining on Sgurr a'Mhaoraich a battle of titans was brewing to capture your attention. Everywhere you looked, simply stunning.

In good conditions, a shallow covering of snow on the ground and on such a great hill, everyone was in good spirits walking up the easy slopes.

But every once in a while someone would that funny spot, where just a little extra snow had gathered, providing more entertainment, as if it were neeeded!

The views to our left were now opening up as well, a group of wee hills, eventually leading up to the remote munro Sgurr Mor.

Eventually the easy slopes lead up the brow of the hill and little descent is required, before tackling the steep upper slopes.

We deviated off the path into a little sheltered spot and munched our lunch while drinking in the surroundings.

In the gap between Sgurr a'Mhaoraich and Gleouraich, the South Shiel Ridge was surprisingly clear.

After lunch we lost the route of the path as it lay buried beneath the snow and we ended up contouring a little too far round the hill. This left us a very steep climb upwards, a scramble of sorts over the steep grassy slopes.

We found a small flat bit and on went the crampons/microspikes and out came the ice axes. Eventually the slopes relented a little, just as the sun broke out over Glen Kingie.

We kept the spikes on our feet as they were giving excellent grip on the slippy, snow covered slopes. Back across Glen Kingie and behind some smaller hills. The munro Gulvain/Gaor Bheinn became visible.

Again the slopes eased off a little and we approached the scrambly bit, just before the summit.

This scramble can be avoided, by walking to your left and then up a steep wee gully. We went up the scramble and decended the gully. Care had to be taken at the top of the gully as a rather large cornice had formed.

From the top of the scramble/gully a false summit is reached, but it's only a matter of a few more metres before the real summit is gained.

The clag had closed in as we stood at the top, but I don't think any of us minded too much. Gairich had been great until now, then it teased us by being clag free soon after we left it. A little below the summit the view back down towards Quoich Dam was superb.

Over towards Gulvain, the sun was beginning to set.

It was off back down the hill, making a better job of following the path this time! In no time we were back onto the easy slopes and taking the crampons back off. While the others got ready, I played about with taking a few panoramas with my iPhone.

So it was back down the same track, over the icy bit and frozen mud to the Quoich Dam in the twilight, but well before dark.

What an area for hillwalking. Love it! Can't wait to go back

Another top report SL....it was one of the best days ave had on the hills good banter and company once again. i did this one last winter and the views from the top were stunning
..so you must go back! (..im sure you wont need your arm twisting! )

Looks pretty tasty to me.
Fancy it from Kinbreak then doubling back to do the 'ridge' of Sgurr Fhuaran all the way to Garbh Cioch Mor.

another top report SL ,think im going to leave this one to finish on

Looked a great day Scottishleaf,hoping to get to this one soon,you'll enjoy the ones down the road as well,great area this,well done you and the team

fantastic day out, enjoyed that one myself, and smashing company

, hopefully not to long to wait to get out again. cheers.

Well done on getting out again, lovely photos

Great report and pictures! You have whetted my appetite for this hill!
Well done to all

The Coolest bunch of walkers in the highlands 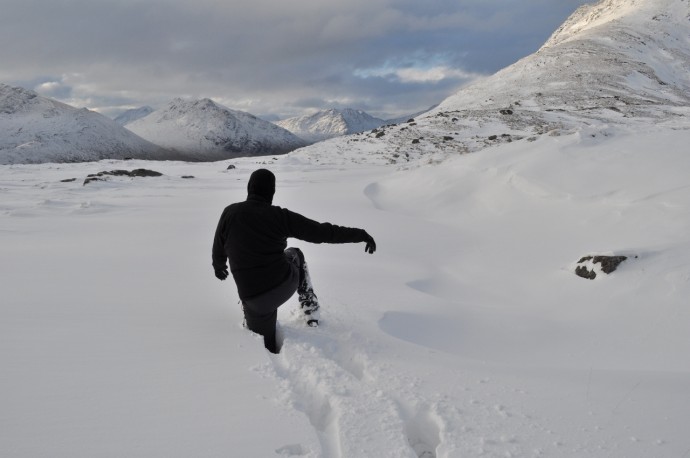 and such a fun day out some of us did the scramble down again too :D A great day with Great company

I'll post a link to the video if it ever uploads

Great report!
Looked like a fun day in the hills!

I liked this report!
My favourite trip so far.
I will do this many times more!