Route description: Aird Mhor and the Falls of Balgy


This TR has been pending for almost a month. It's not a big deal, no mountain madness involved, but the scenery is lovely and I thought I could share this short stroll.
It was Boxing Day and after Big Christmas Eating it was time to burn some festive calories. Weather turned out better than predicted, nice blue sky and not much wind. I bet some crazy souls were out there, high on the hills

We had hosted the family meeting the day before (and spent the whole morning washing up dirty dishes) so serious climbing was out of question. I was actually glad we managed to catch any fresh air at all

We drove to Torridon to visit Falls of Balgie. It wasn't cold enough for water to freeze, but I counted on some spectacular photos of waterfalls in spate - and I wasn't disappointed.
There is limited parking space by Balgy Bridge, but the off-road area looked a bit dodgy so we found space to leave car just around the corner, by the track leading to Marine Harvest hatchery.

Track_26-DEC-12 BALGY.gpx Open full screen  NB: Walkhighlands is not responsible for the accuracy of gpx files in users posts
The fish farm equipment on Loch Torridon: 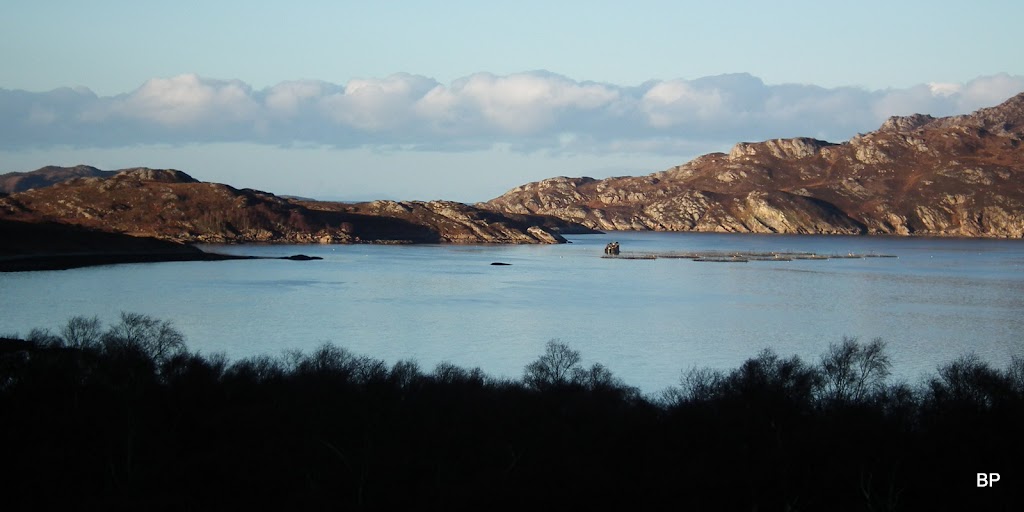 We walked along the road back towards the bridge, with the majestic faces of torridonian giants in plain sight: 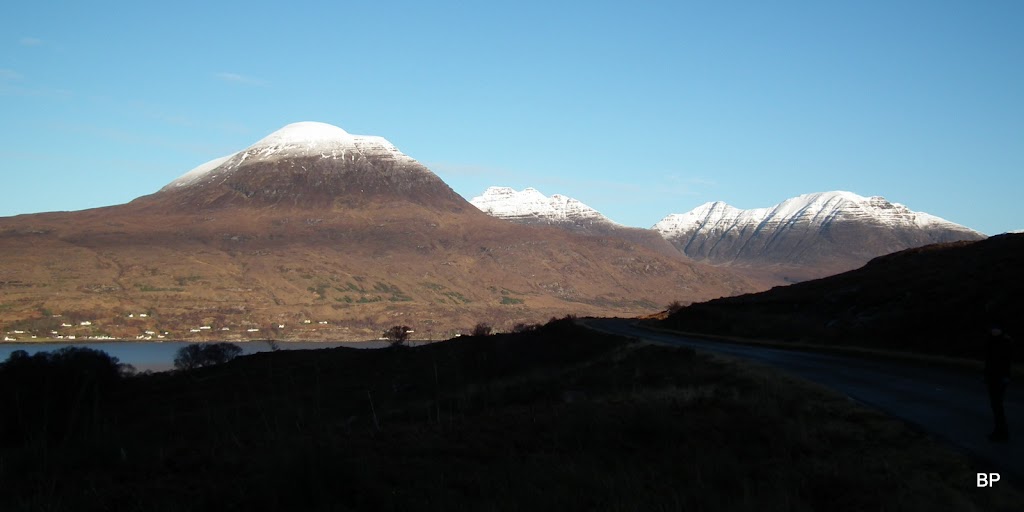 Beinn Dearg - almost a Munro. It's the highest Scottish Corbett. Kevin once called it "that F&*%$ Corbett behind Liathach"

(excuse my language...). Impressive mountain as it is, I'm determined to conquer it sooner or later. 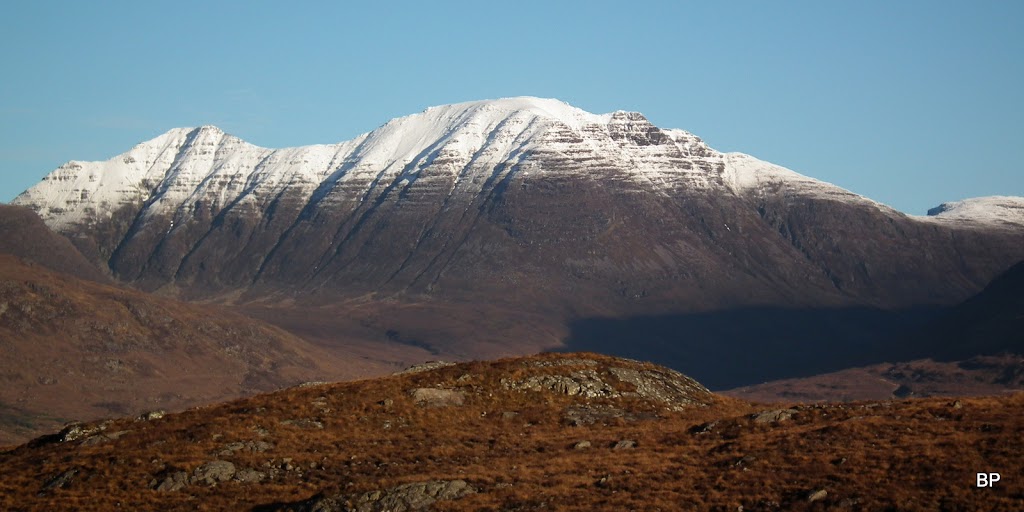 Liathach - even more jaw dropping. I looked up and though - damn it, and I have been up there? 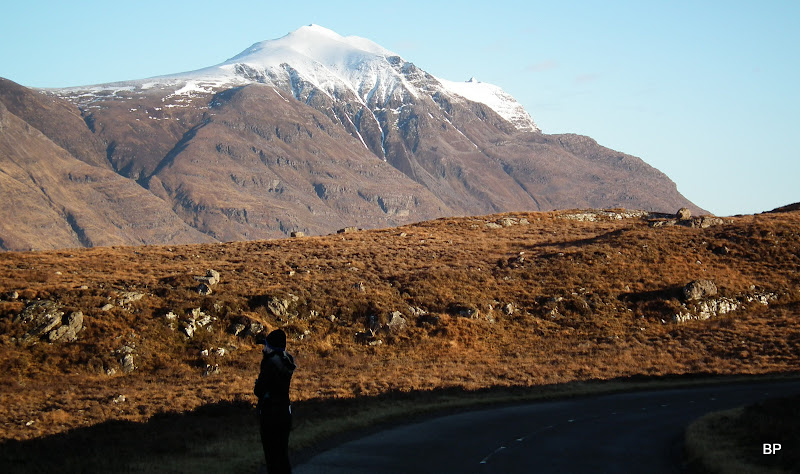 Beinn Alligin, The Jewel of Torridon, graceful and charming... 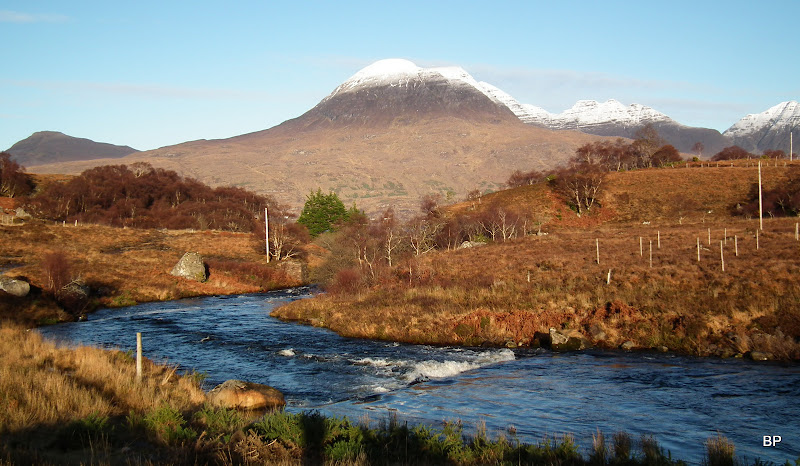 From Balgy Bridge, we followed an obvious path along the river: 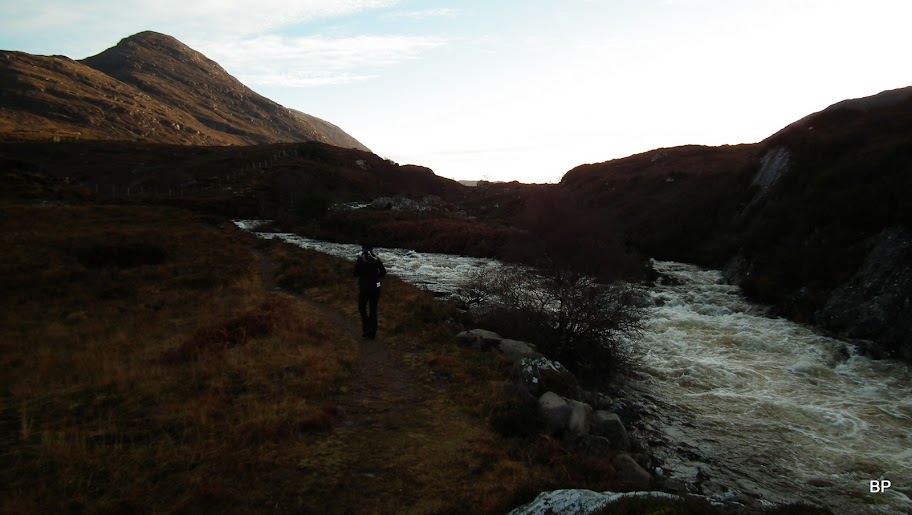 My wish for lots of water was granted: 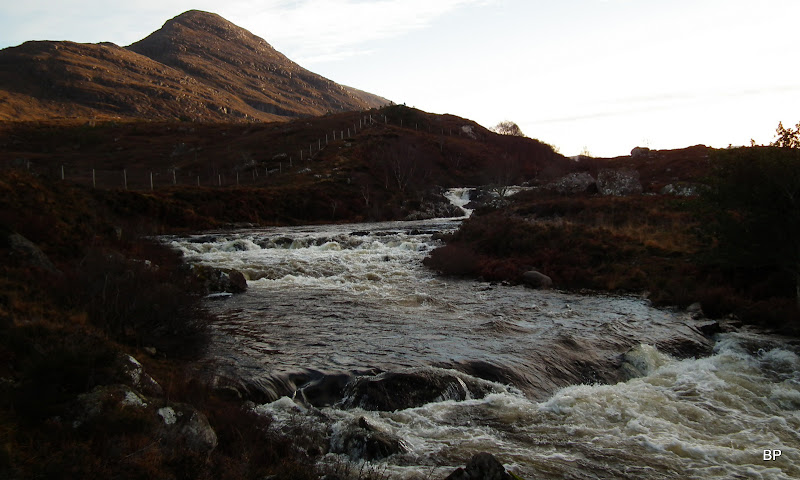 The falls from the distance: 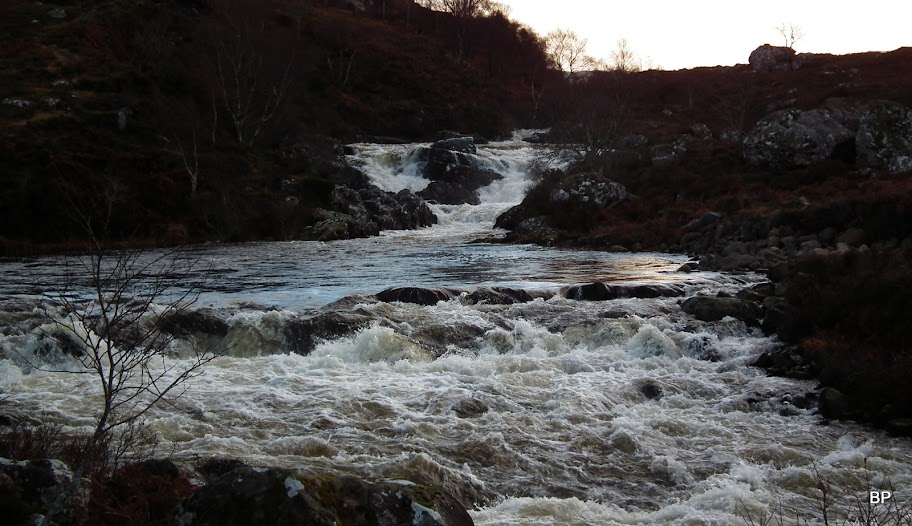 Falls of Balgie are not spectacularly big, but with the river in spate, they still looked good: 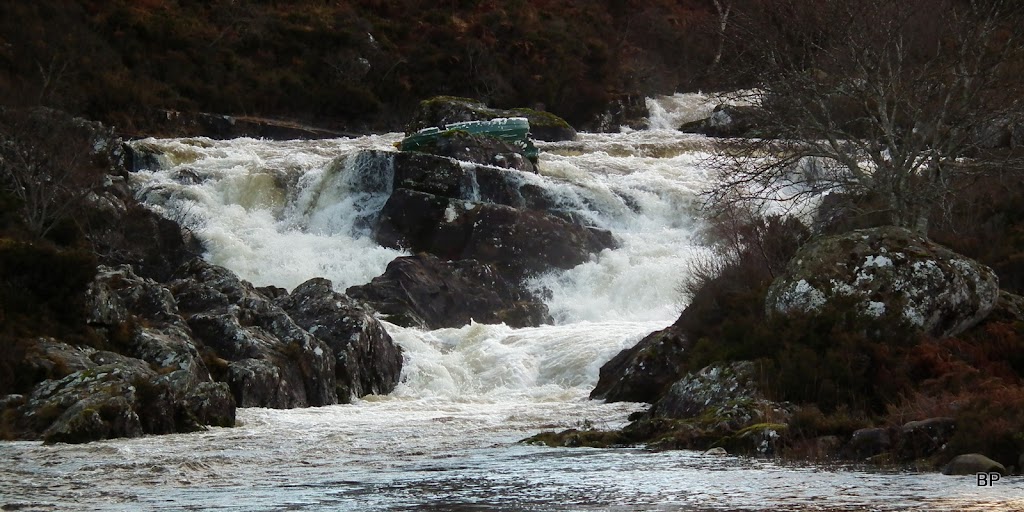 The path reaches the falls, there are even a few big rocks to sit on and watch the water plunge down... Though on that particular day, it was too cold and too wet to sit: 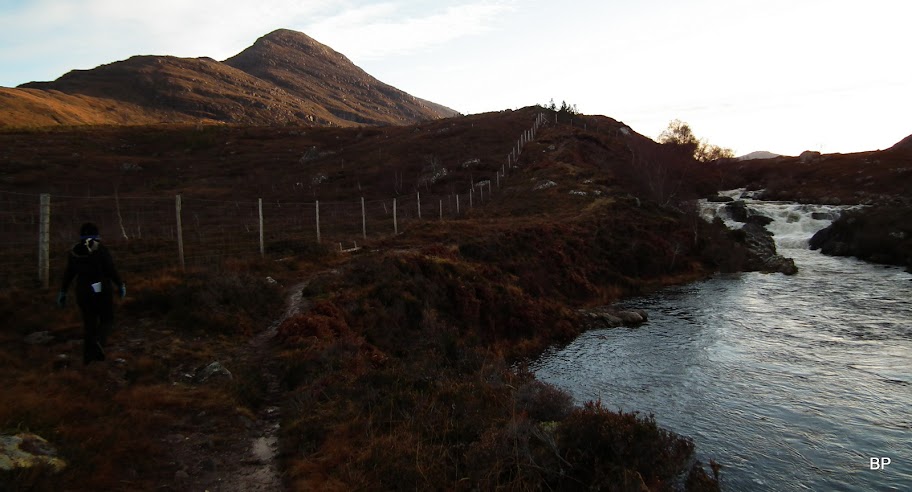 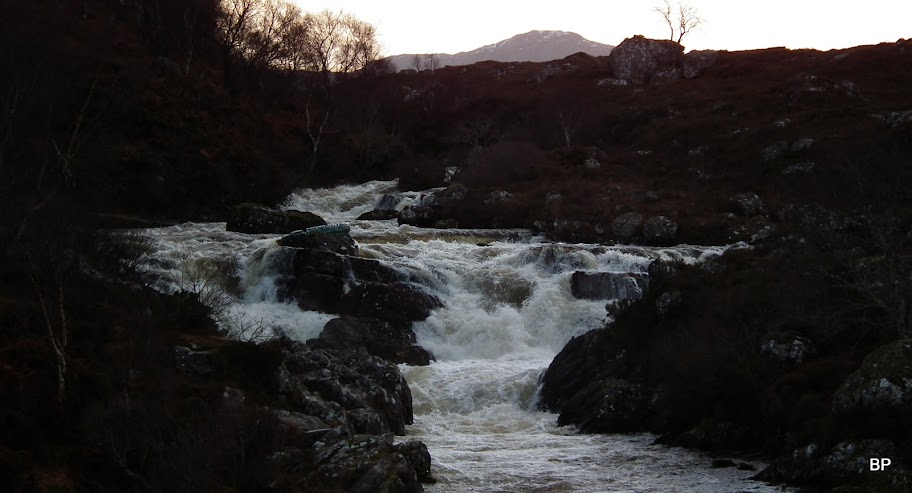 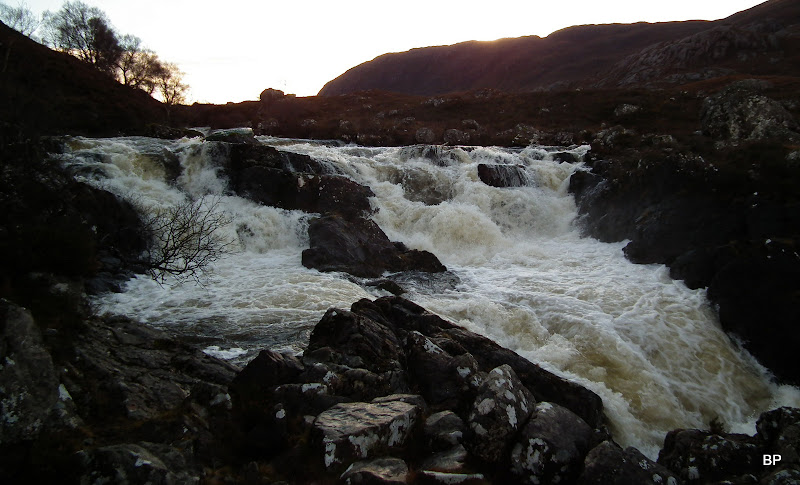 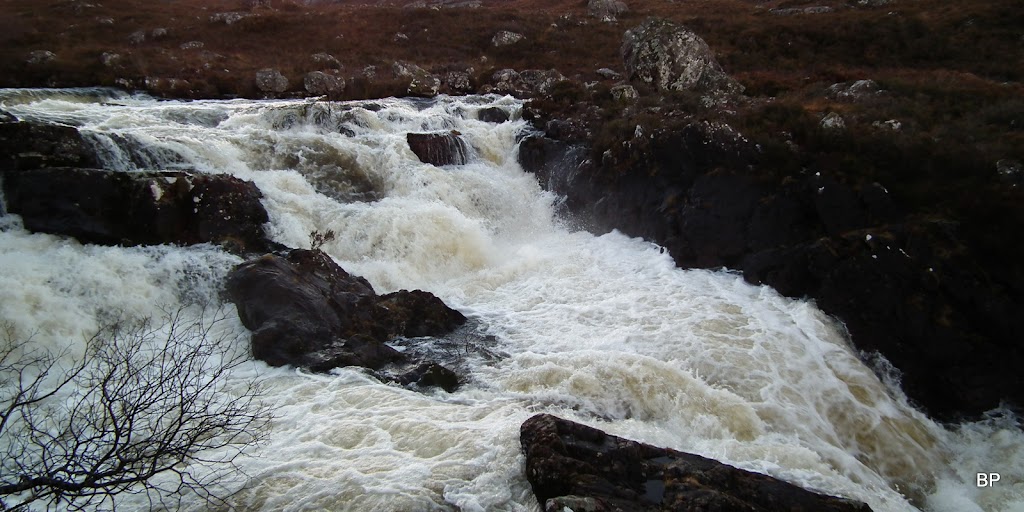 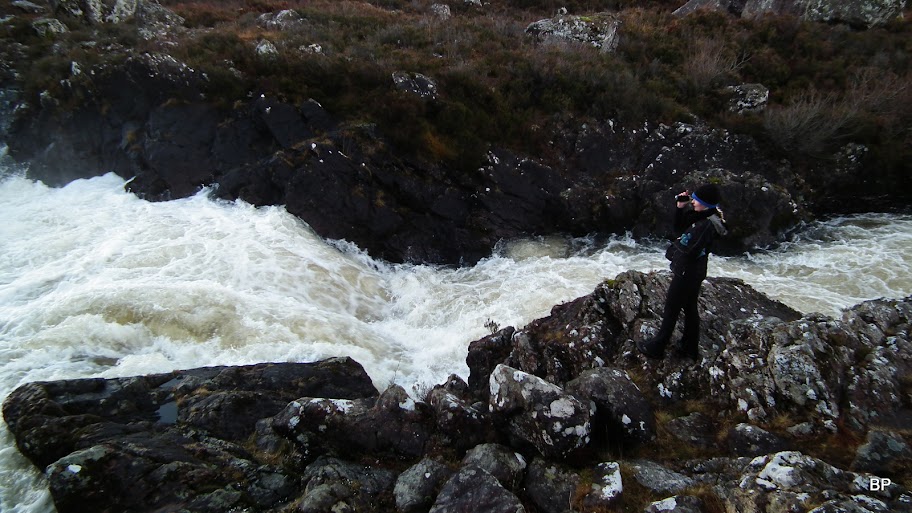 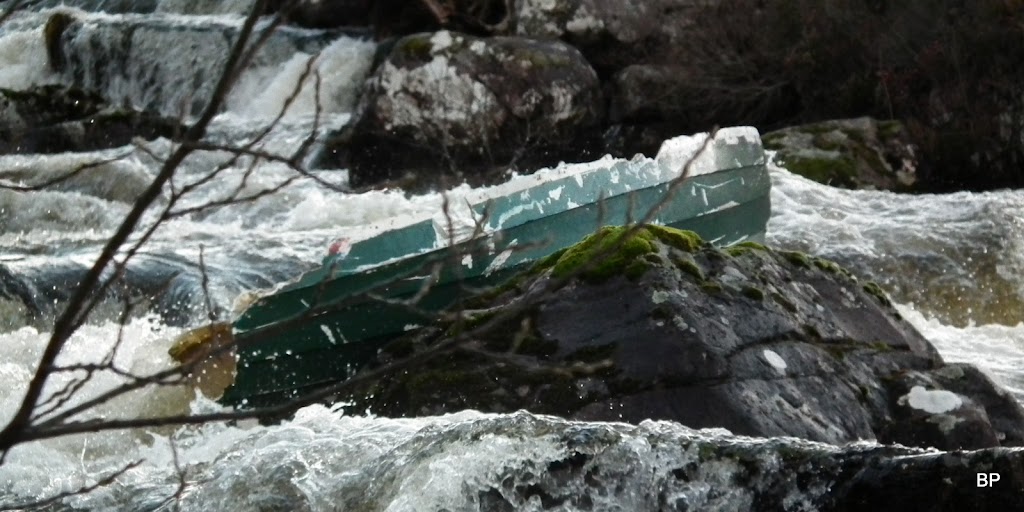 The path climbs the slopes alongside the falls... 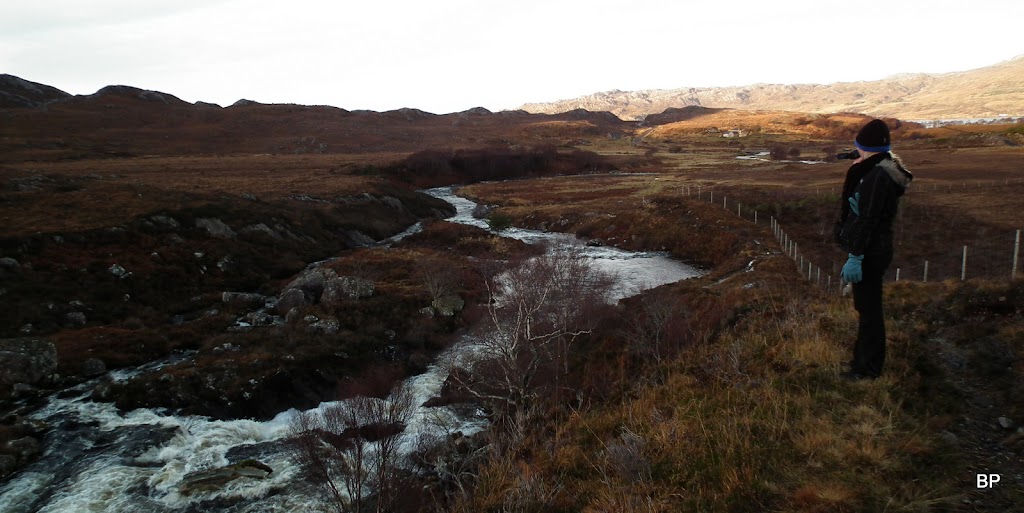 ...and then follows the river all the way to the shore of Loch Damh. 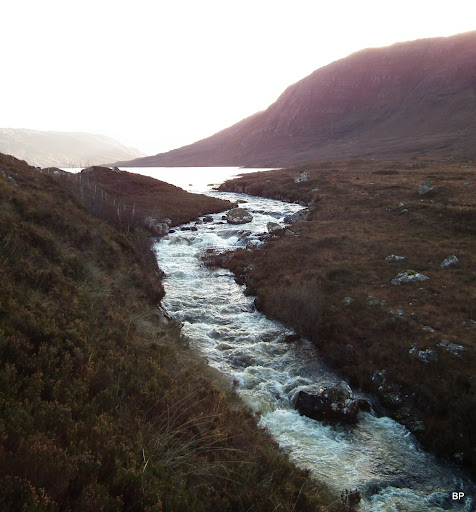 Loch Damh seen from the path. It is possible to walk along the loch shore all the way to its opposite end (or at least that's what the 1-25k map suggests), but we left that for another day: 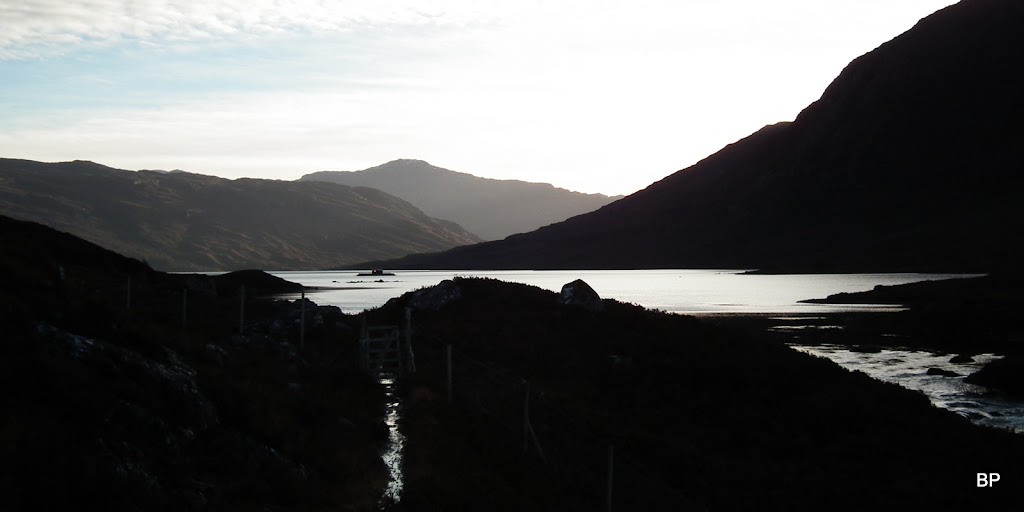 A couple more small waterfalls on the way: 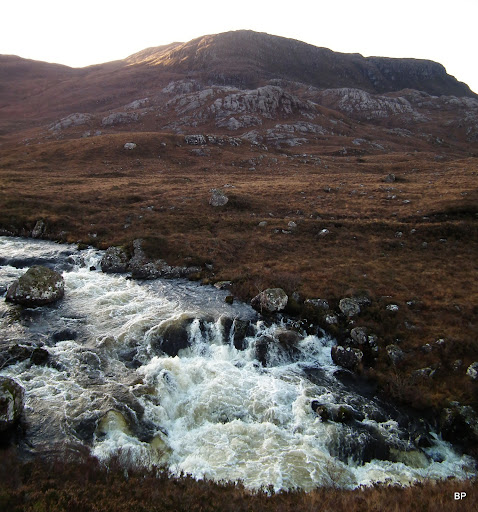 We took a short detour to the viewpoint (there is a sketchy path): 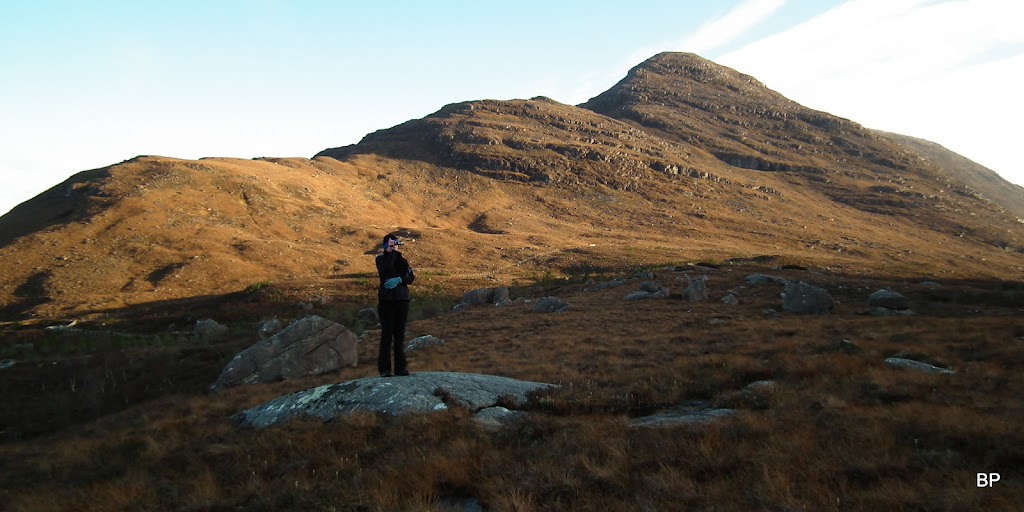 You don't have to climb very high in Torridon, to treat yourself to something spectacular-spectacular: 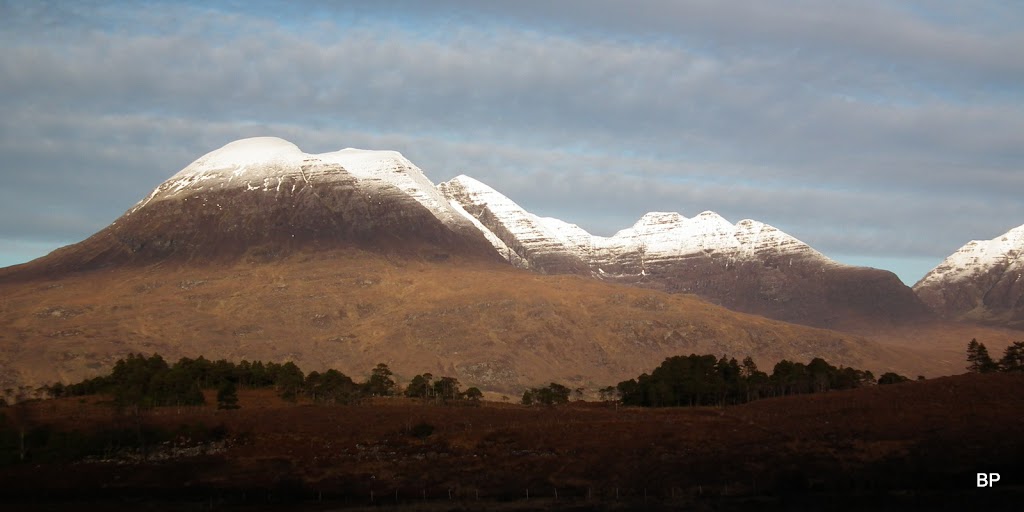 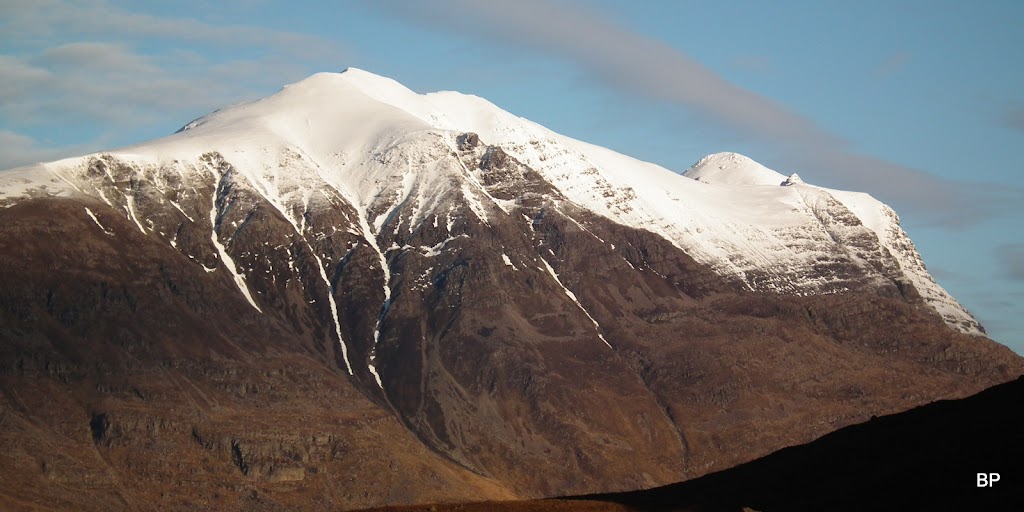 From the viewpoint, the best way is to retrace your steps and rejoin the original path along the shore - it will lead you to a gate in the deer fence. We decided to cut across the slope and soon came across the above mentioned obstacle. We were too lazy to return along the fence back to the gate, so we climbed over the fence

and soon found the path again. It took us to a small jetty: 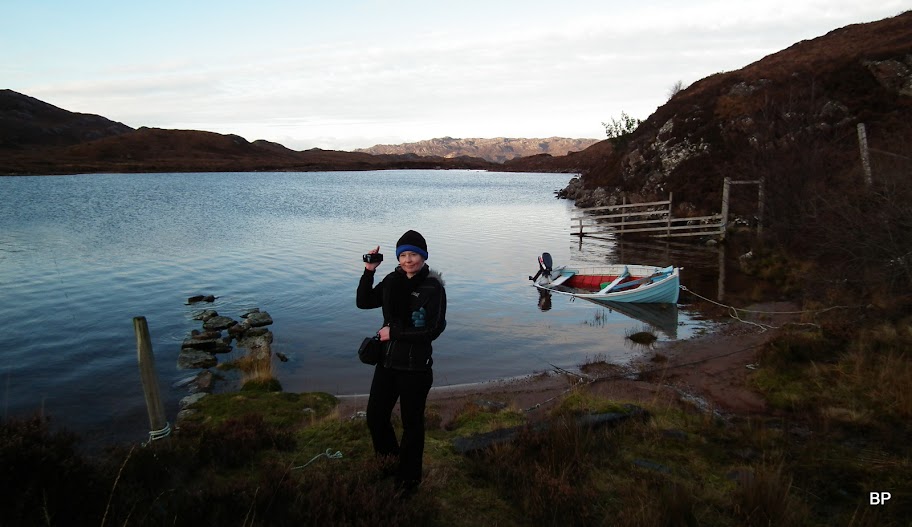 From the jetty, we returned to the tarmac road along a dirt track, with great views around us all the way. I kept glancing at the pointy summit of Sgurr na Bana Mhoraire, the northernmost top of the Beinn Damh ridge. We talked about climbing Beinn Damh in winter conditions and about a month later... Bang! We did it 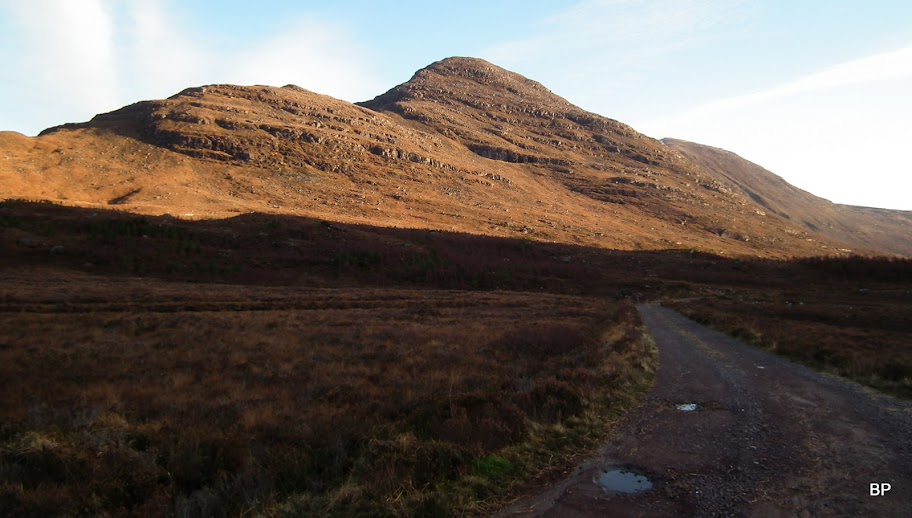 There is more to see in this area and we will certainly explore Aird Mhor peninsula next time we happen to be in this corner of Torridon. At the moment, I'm hoping for more winter climbing. IF we get the right conditions. Meow!

Well worth the wait BP with some absolutely beautiful shots there. As for the dishes...get a machine and give yourself more time in the hills

And I have no problem imagining the roar of the waterfalls. What a good walk for views without actually taking in summits. Looks great for a day with a slow start it when to tired to do a big walk. Will keep that in mind, thanks for posting!

I've found myself at the wrong side of a deer fence before, but it looked a bit too tricky to climb over (material too bendy, too high, terrain too steep, backpack too heavy) so well done that you did manage!

I can imagine the noise of the falls as me and Mrs K did this walk in August a couple of years ago. Quite deafening at times. We tried to have a picnic at the small 'beach' area by the jetty but were soon swarmed by midges. First time I got to try my midge-net. It worked but not so easy eating the picnic with it on.

Hope you don't mind me adding a quick pic - just so everyone else knows it's a great walk, and the views from the viewpoint across Loch Torridon were quite special.