Creag Mhor - and more and more.

Creag Mhor - and more and more.


The day loomed for another hike in the hills. Forecast was looking good, though some recent snow falls sowed a few seeds of doubt about how things would be on our chosen target of Creag Mhor and Beinn Heasgarnich. Might be better than going through the bogs often refered to, so off we went from the Gilp, at half six in the morning. The incoming light soon revealed quite thick and low looking snow levels here and there, but hopefully it would be better towards the East. Alas, not.
We headed up the single track road, towards Kenknock farm. I think you are 'encouraged' to park before there, but we spoke to the farmer who indicated we could park higher up, at the small hydro dam, on the Innisraineach Burn, near the pipeline. Saves a good hike up the hill, as it is quite a long walk west, about 3 miles along the track to Batavaime and it was at this point we added the 'more' to the Mhor, as we dithered between us, perhaps distracted by the impressive views of Beinn Challum, as to what was the right ridge to head up, working between two maps. Where we should have went up, instead of come down!

Probably helped by my 'instincts,' Big Jesper headed further along to the next burn and off we went heading up the ridge towards the crags on Sail Dhubh. "That's the wrong way," I hear you say. Yes, I know that now. Quickly the snow began to thicken to a depth of one foot and often much more than that, but the grip was good and conditions pleasant. About 700m, or so the route became less apparent, so we went our own ways to explore further, me choosing a steep, narrow incline, Charles heading round the corner to see if there lay a more gradual approach. Up Sail Dhubh in foreground to wee peak, Stob nan Clach in distance. It was hard going up this broad chimney, plunging waist deep in snow at times, but Big Jesper was to find his hopes of an easy route to the top dashed and had to return to my route. Having made it to the top, I was not for going back to tell him it was possible to go my way. After waiting for several hours - well, it seemed like that, Big Jesper finally had retraced his steps and caught me up. Big Jesper trails in my wake - as usual.

Now on the more level ridge, we had another look at the map to check bearings and the gradual truth dawned that the summit we were looking at was not Creag Mhor, but Stob nan Clach. Ooops. Naturally, neither of us wished to claim the credit for our faux-pas, so we agreed to share. That's what friends are for and it gave us a reminder to be more careful next time, when working across two maps. Towards summit of Stob nan Clach.

Anyway, off we set for the summit, enjoying the clear conditions, all the more spectacular for the good covering of snow. It was just about four hours to the top of Stob nan Clach and I think we both realised then, we had used so much energy getting there, we might manage Creag Mhor but would have to forget Heasgarnich, especially as the wind was now getting up and sky turning an unfriendly grey colour. 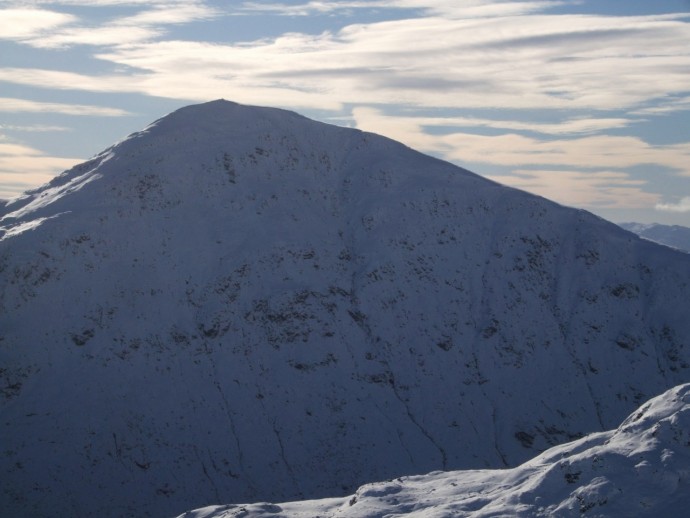 Big Jesper trails in my wake - as usual.

Still, the walk round Frith a'Choirean looked interesting and making one Munro would be better than none, so off we went towards a solitary walker who was making his way of Creag Mhor, round towards us, the difference being his choice of route was intentional. The bad weather closed in for a short while, so we chose to have a wee break and top up fuel reserves, though it was mighty cold after a few minutes with gloves off. No time to dilly-dally, so on we went up the steeper climb to the summit. A few quick photo's, a lingering, longing look towards Beinn Heasgarnich, then off we went, down the hill we should have come up. Big Jesper at the top. 
There was still time for a few good plunges into deep snow before we turned more to the east, dropped down into the valley, before reaching Sron nan Eun, thence followed the burn, back to the track. We finally made it to the car, somewaht fatigued, after a good 13+ miles, taking 7 hours and twenty minutes and knowing we will have to make the return journey some day, to visit "the peak of the roaring waterfall of the horse's," or "Sheltering Hill," depending what book you have in your hand. Creag Mhor from the foot of Sail Dhubh. Some peaks of the Tarmachan Ridge, I think? The cloud comes over BH. Looking down on Coire Cheathaich. Brilliant report of a brilliant walk

Thanks, for kind comments, all. The smiles were maybe more to cover our woopsie?! It was a smashing day for the most part and would be delighted to get another like it when we have to go back to do BH. What route would one recommend, if only out to climb Heasgarnich?

Thanks, for kind comments, all. The smiles were maybe more to cover our woopsie?! It was a smashing day for the most part and would be delighted to get another like it when we have to go back to do BH. What route would one recommend, if only out to climb Heasgarnich?

Not having a map to hand at this very moment in time, and being to lazy to look on the site, I'd guess you might want to go in from the Loch Lyon dam or from the high point of the "road" between Glens Lyon and Lochay.

Also like the route - ideal if you're not bothered about bagging 2 Munros or for the short winter days. Also good to know about the parking place

If you go for the route from the high point in between Glen Lochay and Glen Lyon, make sure you do it after a long period of frost or drought, otherwise the peat bog might be after you!