Charlie had his eyes on Sgor na h-Ulaidh for a wee while and July looked like the time had come, despite the forecast being a wee bit iffy. If the MWIS was right, the hills would be clearing of cover as we were making our way towards the slopes, so let's go for it.
There was certainly a lot of clag on the hills as we headed along Glencoe, but it was reasonably bright looking and fingers crossed, all would soon clear and reveal to us the promise of good views. Things looked promising as we got out the car and kitted out, with just a few strands of mist on the ridge of Aonach Dubh a Ghlinne. A quick dash across the main road and we were on our way, soon contemplating the rather heady prospect of a steep, steep, steep - (get the message?) climb up to the forementioned ridge, or continuing well into the glen to find a more gentle approach. I must have been getting carried away with myself, when I agreed to Big Jesper's urging, just to go straight up towards the prow of Aonach Dubh! We branched onto the hill somewhere on the path which has been put in to take walker's wide of Gleann Leac na Muidhe House due to the 'ornamental garden' - read, 'we don't want walker's passing near our house.'
As the WH report says, it is an exceptionally steep, pathless ascent, on a rocky, grassy slope, but quite good fun for those with sado-masochist tendancies. (Charles taught me that word, Mrs Ferguson.) It proved my ideas of improving fitness, were unfounded, if not delusional, but after a fair slog and a gradual veer away from the vertical approach, we finally made it onto the ridge itself. That took us about an hour and three quarters, to cover the first two and a quarter miles. 
Much to our disappointment the mist was showing no signs of lifting and if anything, begining to thicken. This was not part of the plan, but we still had a good hour and a half to the summit, so it was bound to improve - not! It wasn't too long till the compass was joined by the GPS to help keep us on the ridge, as the mist became fog. I think it was at the bealach just below Stob an Fhuarain as we took a fuel stop, that a solo walker appeared out the gloom – I forget your name now, pal. Anyway, we could see he was trying to get his bearings so we raised our voices, to see if he could spot us, only maybe 50 feet away, but eventually had to approach and identify ourselves, to see if he wished to join us. From here it was about another half hour to the SW, on a steady windy climb, following various remnants of track, till we reached the summit of Scoor na Hoolay, where a lady walker and her dog companion were enjoying the non view. I can’t remember how many laps she’d done of the munro’s, but it was mighty impressive, 3,5 ,7? Anyway, I was just chuffed to add another to my single figure tally, but disappointed the views of Glen Coe, Etive and elsewhere were to remain a hidden mystery. After another wee top up of food and fluids and a parting glance at the rather scary looking crags, we set off to the SW, to find a way down. It is here I would urge you to be particularly cautious and patient, especially in limited visibility, not to try to head off the hill too quickly! While following a fence, it leads off to some very steep, slippy rock which made us turn back at the scary drop below. Just head round further to the SW to Corr na Beinne, where the steep grassy descent is still tricky, but a good deal safer. 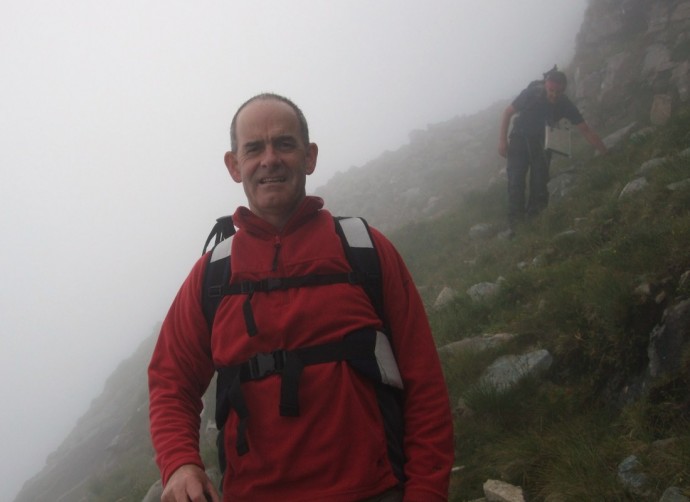 From the bottom we veered NE’ly to follow the Allt na Muide, along the glen, once again taking the detour round the houses, despite my instincts to keep the heid doon and just march on. It was with a feeling of some frustration to now look back up at the summit and see the clag lifting at a very noticeable rate. I guess you’ll have had that same feeling, too? Another quarter of an hour or so, we were back at the car, taking just under the five and a half hours for this one. Of course having once again become depleted in fluids, there was nowt for it, but to retire to the nearby Clachaig Inn to top up, relax and enjoy the view from there. Oh, don't I look happy to be finished that!? 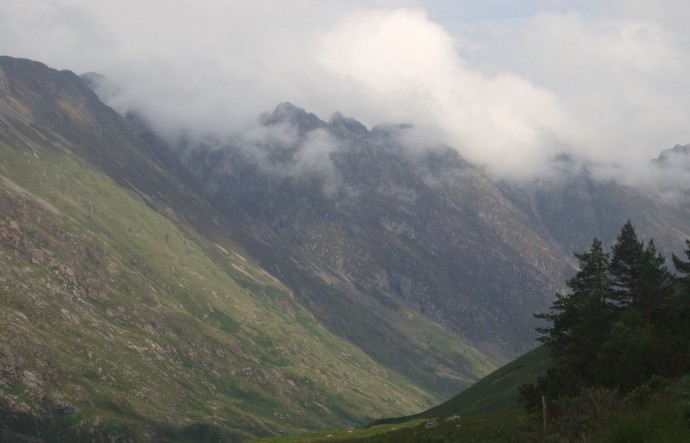 And the AE once more. The nose of Aonach Dubh a Ghlinne

Sounds like you took the same route as myself Jim, it's one heck of a climb to reach that ridge. I lost count of the number of times I stopped for a breather before reaching the ridge.

Much like yourself I had no views that day though I've heard the sight of the Bidean massif is quite spectacular from here.

Hi, skuk, or should that be double oh seven? Yes, can defo sympathise if you took the direct way up. I had to call for many a camera shot, check the compass, take a drink, etc, in addition to being honest and just confessing I needed a stop. A good tester, eh. Was a bit of a pity to miss out on views, but maybe we'll seee you back there on a clear day.

skuk007 wrote:Sounds like you took the same route as myself Jim, it's one heck of a climb to reach that ridge. I lost count of the number of times I stopped for a breather before reaching the ridge.

Much like yourself I had no views that day though I've heard the sight of the Bidean massif is quite spectacular from here.