The bonus of finding an extra day off work was the main motivation for getting back in the car and heading back down the 82 miles to Kintail with the aim of climbing Beinn Fhada (1032m). The forecast was good but the drive down the glens suggested otherwise. I was able to get the car parked in Dorusdain in the same spot as last week when I managed to climb A Ghlas Bheinn.
I set off at 0910 with full winter gear excluding the crampons (in preference to the yaktrax pro walkers on their second outing), gaitors (left in house) and ice axe left in car.
I headed along the path and through the style before turning right and crossing the bridge then up toward the head of the glen. Path was easy going although I would not contemplate using a mountain bike. No sign of any ice but plenty of water. Shame about the gaitors, note to self to check kit before departure..!! 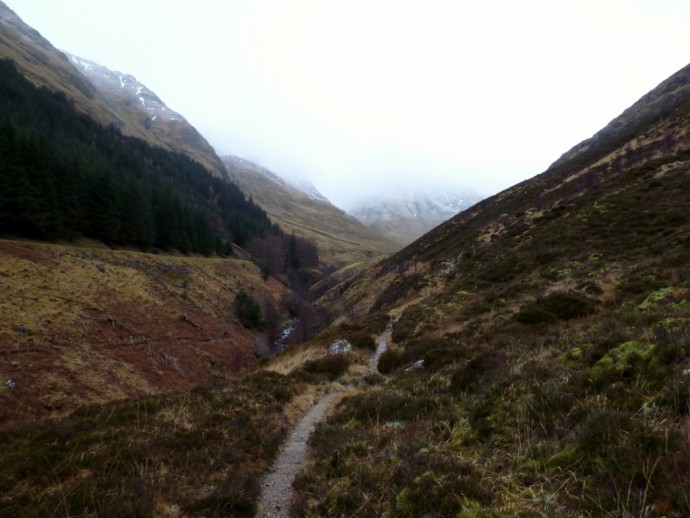 First glance of the Bealach an Sgairne confirmed snow. As I had climbed A Ghlas Bheinn last week via the glomach falls route I had no need to climb right up to the bealach today. 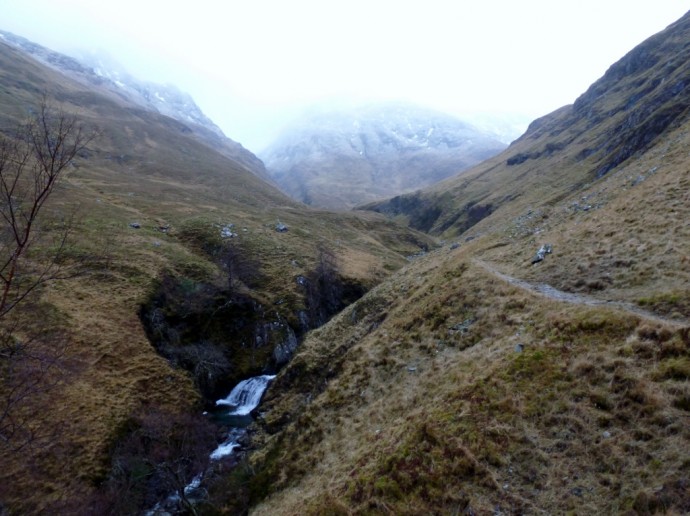 As I crossed the burn I noticed some deer who seemed none too bothered at another eejit heading up into the snow as they were coming down from it. The path turned along the west flank of Meall a’ Bhealach before rising into the grande coire an Sgaime adorned with snow and spindrift. Had a quick assessment to feel the effects of the increased snowfall and decided to continue onwards. The emerging views of the dramatic ice covered cliffs and snow packed ridges were too big an enticement. 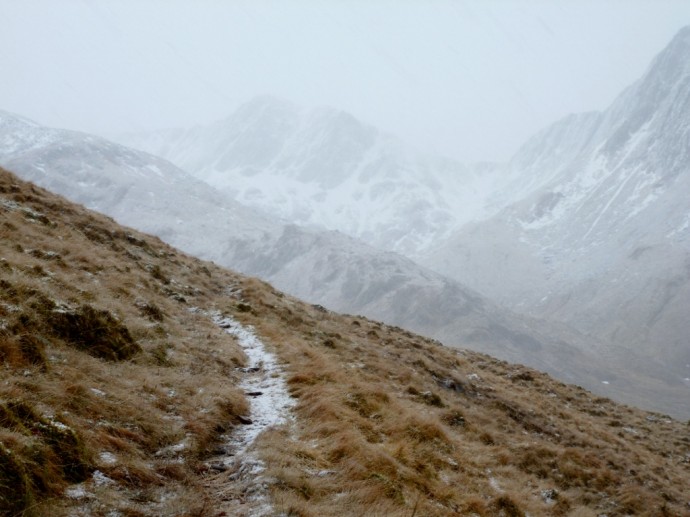 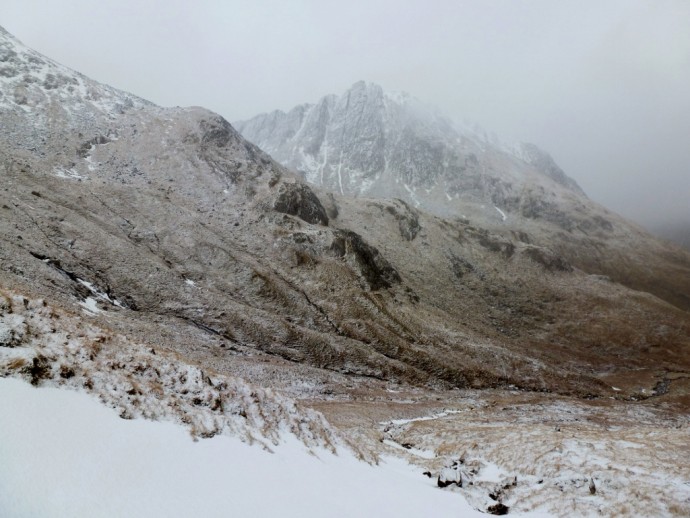 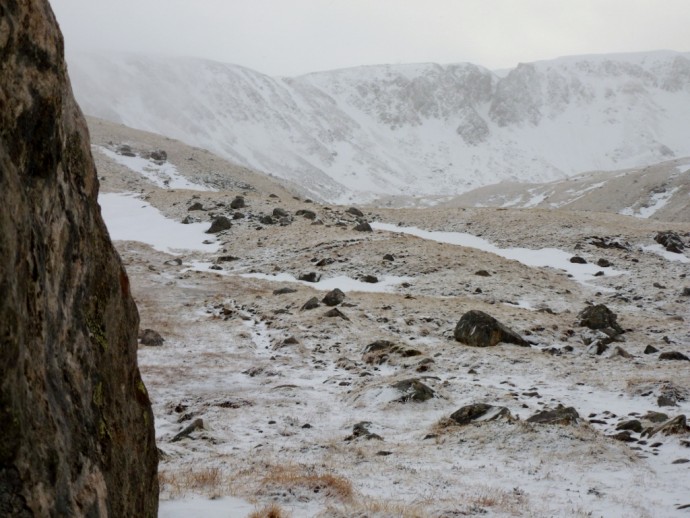 Time to put the yaktrax ice grips on, not a substitute for crampons but they have earned a transient place in the kit bag. The path was covered in hard packed ice but it was still easy to follow as it zig zagged up to catch the main ridge. 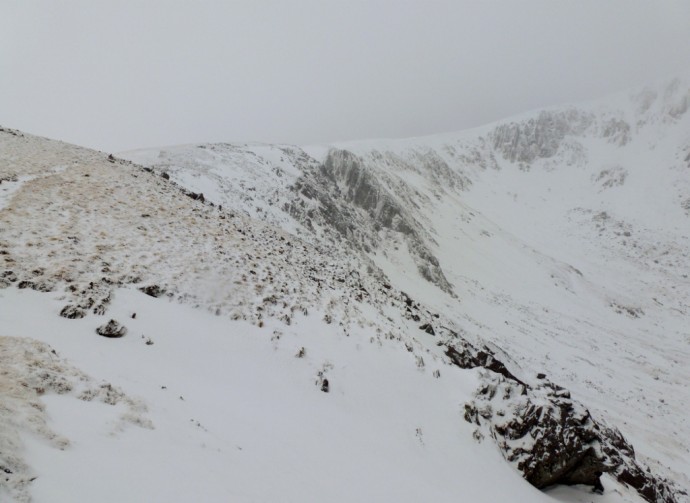 On the ridge the wind chill level increased and the spindrift snow brought tears to the preverbial glass eyes. 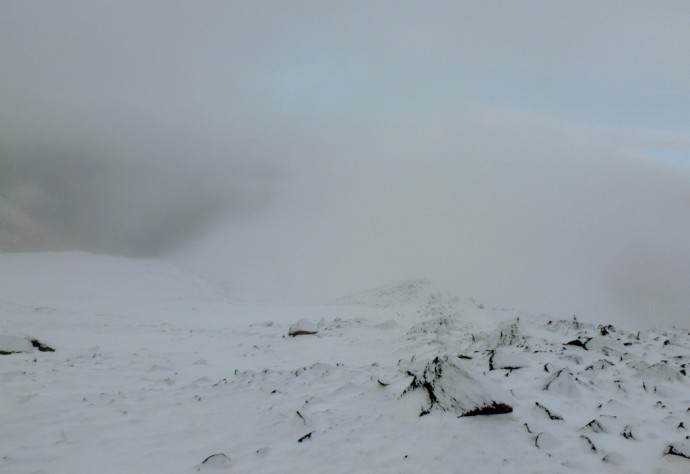 Still there were fleeting glimpses of blue sky which I optimistically hoped would bring panoramic views along the summit ridge. 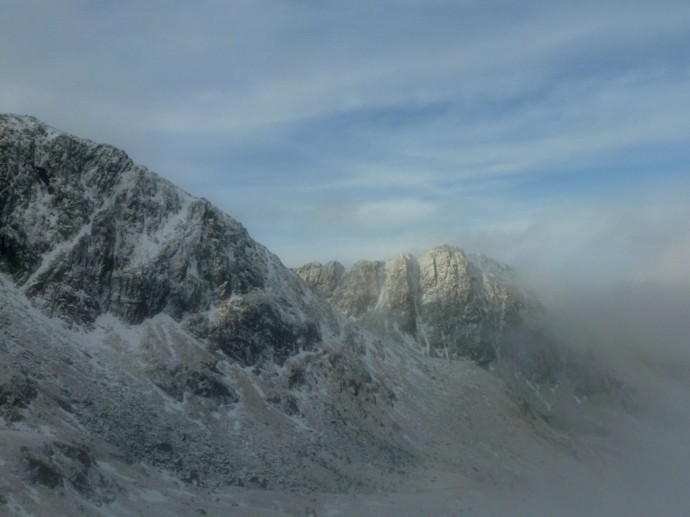 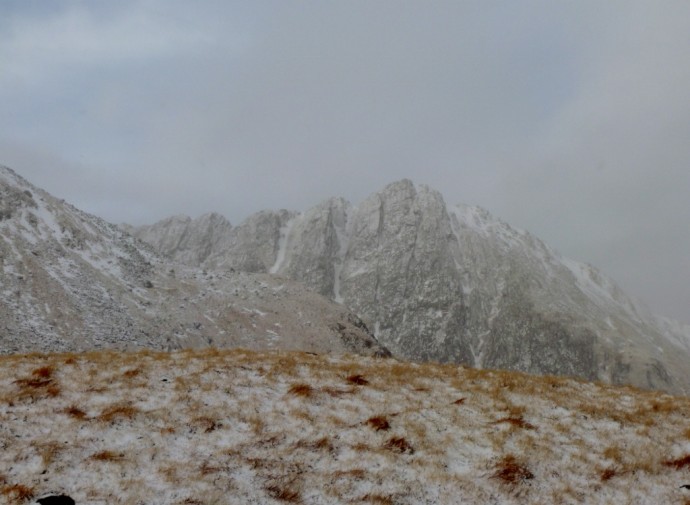 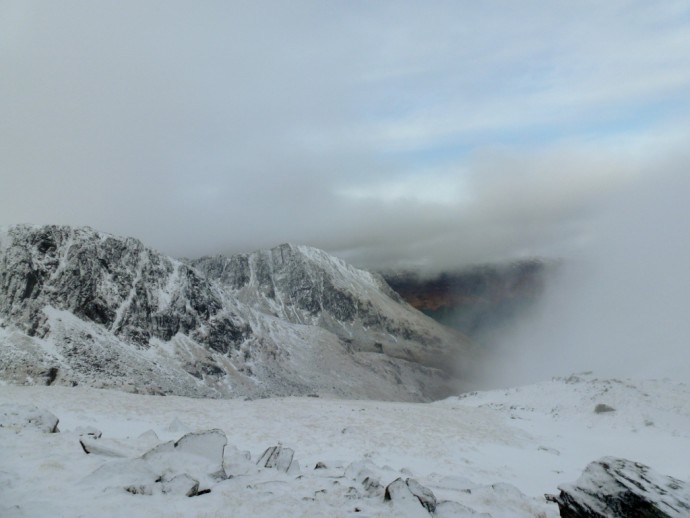 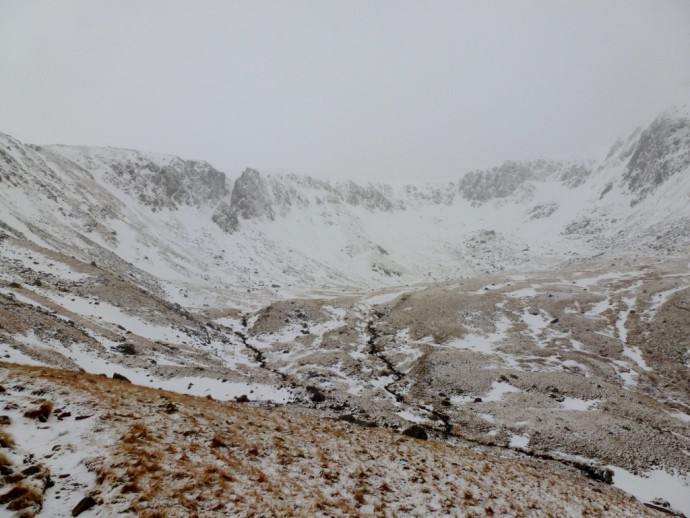 Alas not to be. The summit cairn was found next the trig point at about 1210. 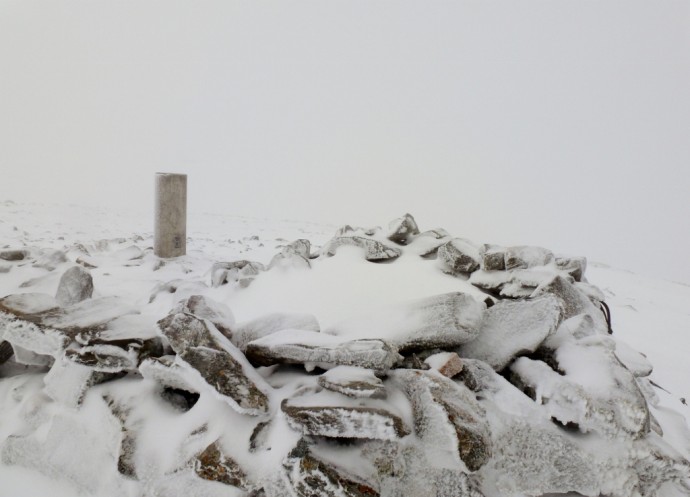 The wind increased, spreading more blinding snow. After a sandwich and another crunchie it was time to get down.
Another piece of kit on trial was a thicker ply plastic bag for glissading. 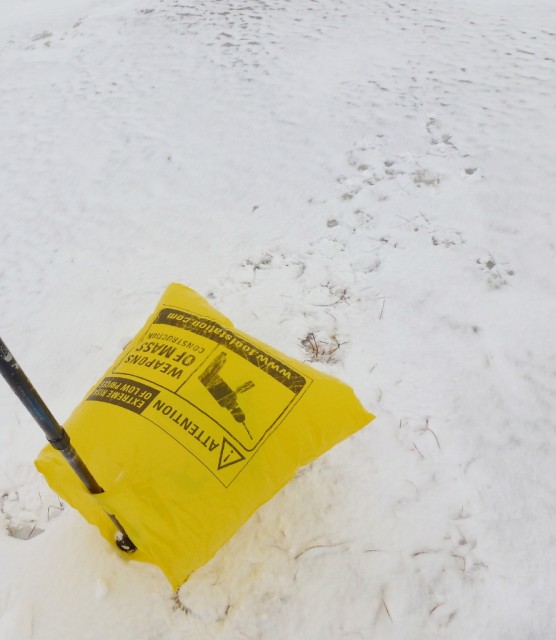 Unlike last week I managed to get this one going, would not say it was a graceful movement, however it did work. I used the walking pole for steering and my butt as the shock absorbers and off we went. Unfortunately the shock absorbers were pants and came to a shuddering halt on the first main corrugated section of ice. Might need some padding to the prototype or I might just invest in the real deal next time.

I continued down the ridge to locate the entry point down into the corrie. There was a couple of sections that required a wee bit extra care to navigate or there could have been more than glissading bruises to worry about. The ice grippers on the sole of the boots held up well too. 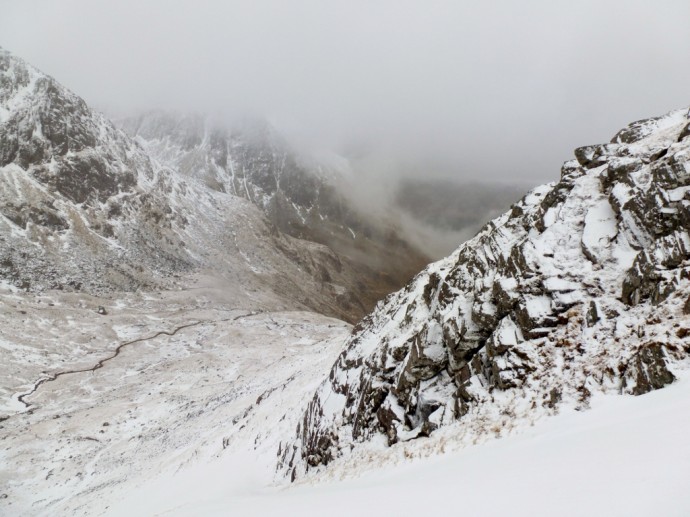 As I neared the end of the glen two golden eagles soared over my head and headed toward Beinn Bhuidhe. I saw them again lower down but they were just too far for my camera to capture. I tried to zoom in one one but the quality is not great. 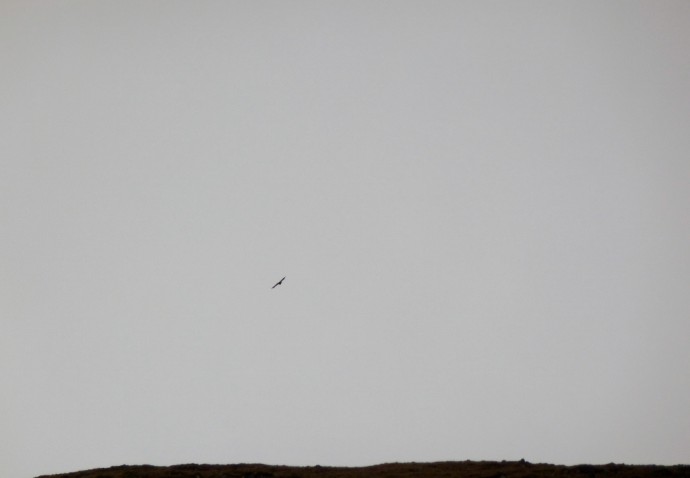 Safely back in the car at 1430 it was time for a quick change then a short drive to Eileen Donan castle for a hot coffee high calorie cake. 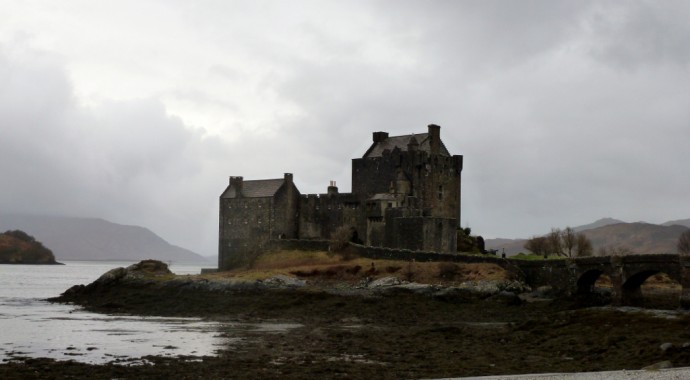 Tea room shut for winter…well best laid plans, so it was onto the Tarvie carry out shop en route home. Back home in front of radiator at 1700 safe and sound and feeling very lucky to be in a position to be able to enjoy a day on the hills.

Good one! Have been in Kintail and wasn't sure that big lumpy mass of a hill wouldn't be boring to go up, but your pictures of those rocky bits make it look a lot more attractive!

Seems like you had some dark moments weatherwise mixed in with some blue. Was the ice axe left in de car on purpose or by accident?

Too bad the tea room at Eilean Donan was closed as it's just excellent! Amazing cakes there

There's another tea room down the street in Dornie proper, very close to the Castle. Haven't been in but looked inviting. However, might also be closed in winter?

Thanks Lenore. The hill was not as boring as it first appears from some areas in Kintail. It is fairly straight forward from the glen and in this occasion the snow just filled in the cracks nicely. Aye the ice axe! kind of thought it was not needed so gave it a rest.

I noticed that you are from over the water and enjoy visiting us, hope you enjoy your next outing and as you will have experienced we are all open and friendly. Just like those tea rooms in the summer.

I had 2 of those red seats you sit on never really got to use before I lost them last week, but nothing better then sliding down the hill

I had 2 of those red seats you sit on never really got to use before I lost them last week, but nothing better then sliding down the hill

Some very haunting photos there!

scottishkennyg wrote:Another piece of kit on trial was a thicker ply plastic bag for glissading.

Glad you upgraded your kit!

scottishkennyg wrote:Another piece of kit on trial was a thicker ply plastic bag for glissading.

Glad you upgraded your kit!

You'd have earned that high calorie cake, Kenny, if the tea room had been open. Some really nice photos of a good route. I definitely agree it's not a boring hill. There's fine corrie scenery on the way up, and the Meall an Fhuarain Mhoir ridge looks interesting.

simon-b wrote:You'd have earned that high calorie cake, Kenny, if the tea room had been open. Some really nice photos of a good route. I definitely agree it's not a boring hill. There's fine corrie scenery on the way up, and the Meall an Fhuarain Mhoir ridge looks interesting.

Cheers Simon. I see you also had a good day on these hills last year too.

sounds like a good day ..been leaving this hill for a good day to include the scramble ..shame about the tea room

sounds like a good day ..been leaving this hill for a good day to include the scramble ..shame about the tea room

Cheers savagealice...I did fancy taking the scrambling descent route too but opted for the easy slide down this time. I notice that you are fortunate to live near enough too to pick this one off on a clearer day in the future. The wee tea room at Tarvie was just as good.