We had previously tried this route in October but the cloud was down, the wind was strong and driving rain into our faces and so after 4 hours we had turned back. This time the forecast was for sun and high cloud, with some wind and for it to be cold - more than enough encouragement to give it a go.

We (me, Mrs C and Charlie the dog) arrived early and were walking just before 8.00am. It was a lovely day, cold but bright and with clear views. The first sun of the day hitting hit Ben Ledi was lovely sight. 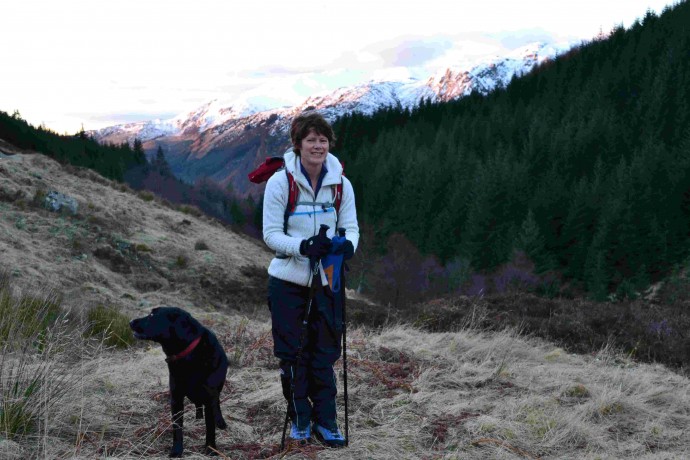 Full of enthusiasm we started climbing the steep slopes of Beinn Each, and saw some deer in the distance, the wildlife of the day. Charlie gave them a hard stare but I don't think they were intimidated! We put crampons on about half way up as we were into hard packed snow. At the top it was blowing a gale and very cold but the views made up for it with Stuc a'Chroin looking deceptively close. 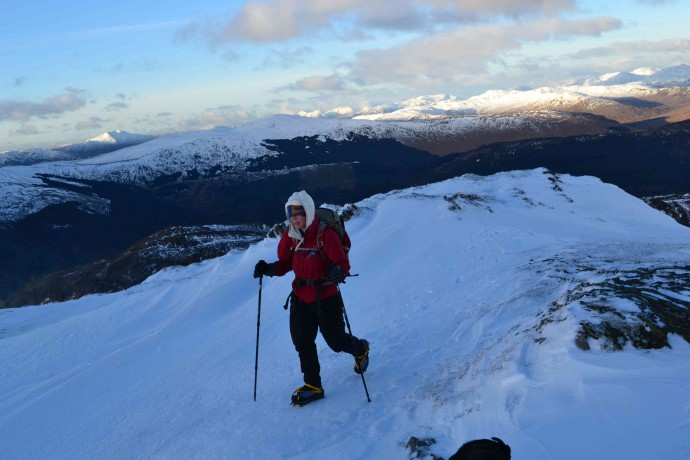 Approaching the summit of Beinn Each - breezy!

Pausing only for a home made energy bar, full of nuts and oats, I have to insist on the chocolate topping, we headed down to the Bealach nan Cabar - what a great name.

It was a very tough walk along the bealach with a mixture of hard snow and snow drifts, more climbing than we had realised and with a gale blowing which made walking a struggle in exposed places. We got to the bottom of Stuc a'Chroin and had an early lunch as we thought that it would be not Baltic but Arctic at the top. Having said all that I was having a great time. It was a steep climb up icy slopes - thanks be to crampons - to the top. We had wondered how Charlie would cope with the ice but he was fine with his nails acting as built in crampons. 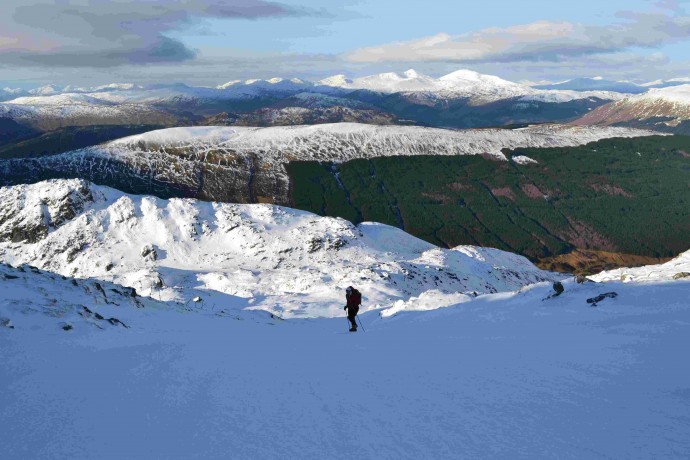 A tough climb, but look at the view to Ben More

It was blowing a hooley at the summit so that it was hard to walk in a straight line, but the sun was shining, the views were great all around - to Ben Lawers, Ben More and Ben Lomond - and we were alone. 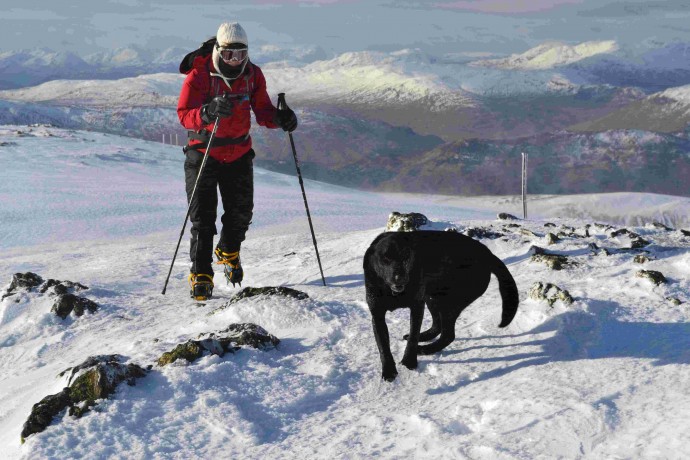 We saw the only person of the day on Ben Vorlich a mile away. It was fantastic! This is what winter walking is all about. 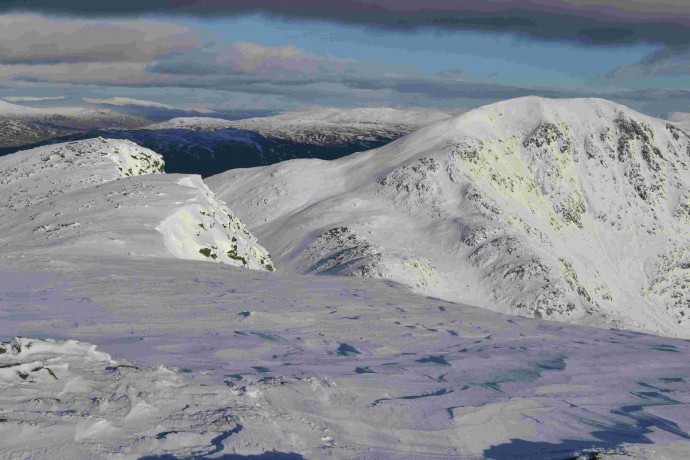 We took our photos and then headed down Coire Chroisg. Suddenly we were out of the wind and so we stopped for some soup and to enjoy the views, before heading down the coire.

We found that we had headed too far down the coire and had missed the turning back along what the route describes as "rough deer tracks". It looked like a tough way to get back and the alternative was to head down into Glen Ample and pick up a decent track, and so we took our chances and headed down hoping to find a way through/under/over a deer fence. As we had thought it was relatively easy to get under the deer fence where it crossed a stream, Allt Coire Chroisg. From there we walked down the north side of the stream in a clearing in the forestry plantation until we hit the track back. It was a fair walk back but with no snow around and a decent track, it was fast walking. We got back tired and happy and looking forward to the Calcutta Cup rugby match....

Some really nice photos there.
Even better when you get the hills to yourself.

Very useful report - I'm going to do the walk today and just wanted to check it was safe for dogs. Thanks.

dcsinclair8976 wrote:Very useful report - I'm going to do the walk today and just wanted to check it was safe for dogs. Thanks.

I am glad it was helpful. How was your walk?

I did this back at the end of May last year, thoroughly enjoyed it in the the heat, but even on that day that Bealach between Stuc and Ben Each was windy. Glad you seemed to have a good day too