Findhorn Gorge - Dicing with Death in the Darnaway Forest

Findhorn Gorge - Dicing with Death in the Darnaway Forest


The Findhorn gorge and the surrounding area has always looked enticing on the maps. Short waymarked walks listed on Walkhighlands give a taste of the landscape: dense forests and surprisingly steep terrain, with foaming water funelling through rocky gorges. The whole area is remarkably undeveloped, with few roads actually meeting the waters' edge, and no settlements on the Findhorn between Tomatin and Findhorn itself, on the Moray Firth.

OS maps also show paths following the Findhorn and its tributaries for almost the entire forested gorge section (the Darnaway Forest). The perfect ingredients for a winter day walk. However, would it turn out to be as straightforward in reality?

The start was promising: a clear, mossy path (decorated with a sign saying "Danger! Cliffs!" or something) following the east bank of the Dorback Burn. The first crunch point was whether we'd be thwarted by private land around Glenerney Lodge, and we're still not completely sure whether we broke any rules. The first sighting of the Lodge wasn't encouraging: we'd have to sneak through a gate next to the tennis courts in full view of the house. 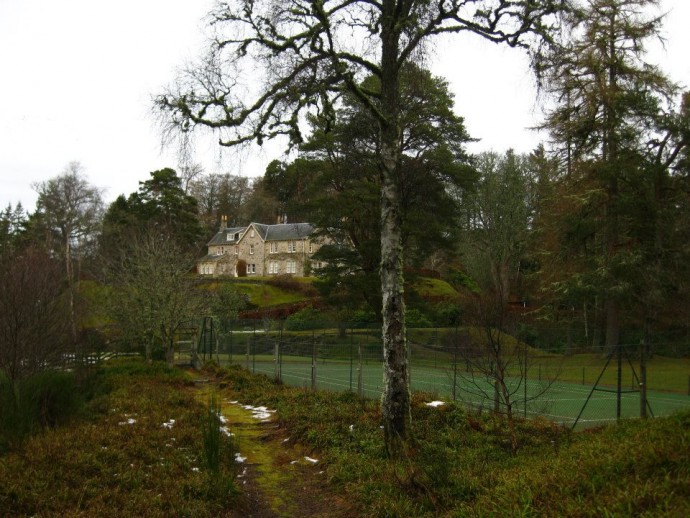 Luckily there were no "Private! Keep Out!" signs, and the gate was unlocked. Hopefully we weren't breaking in, then, but it was still unnerving tip-toeing across the well-manicured front lawns, trying to keep out of sight of the large lodge windows!

In the end, we passed by without being shot, and soon reached a footbridge over the Dorback Burn a further 1km downstream. There was a path marked on both sides of the map here, so we elected to switch to the west bank which was less open and steeper - so less chance of being spotted if there were unfriendly souls about! The bridge was slightly rickety and wobbled alarmingly - but this was nothing compared to what we'd come across later. A delightful set of ladders led up the steep hillside on the opposite bank. 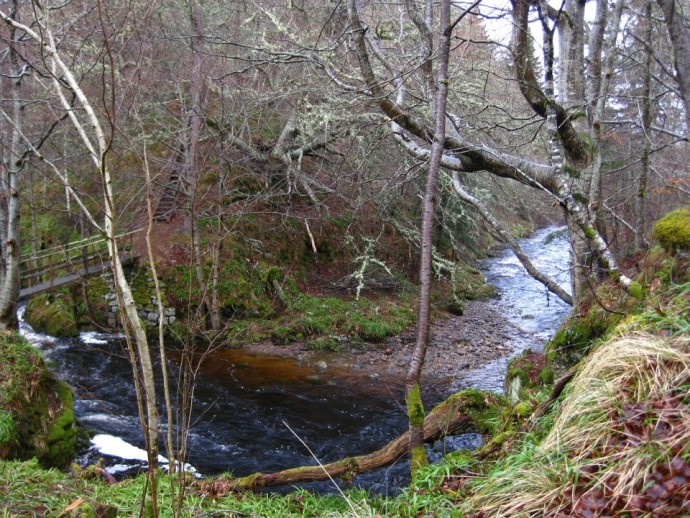 The path quality had been excellent so far. They had evidently been very well-built several decades ago, but lack of recent use had covered them with springy moss, soft but not boggy underfoot, and very easy to follow. The next part (I think) included a delightful section along a ridge, with views of the Dorback valley to the right. 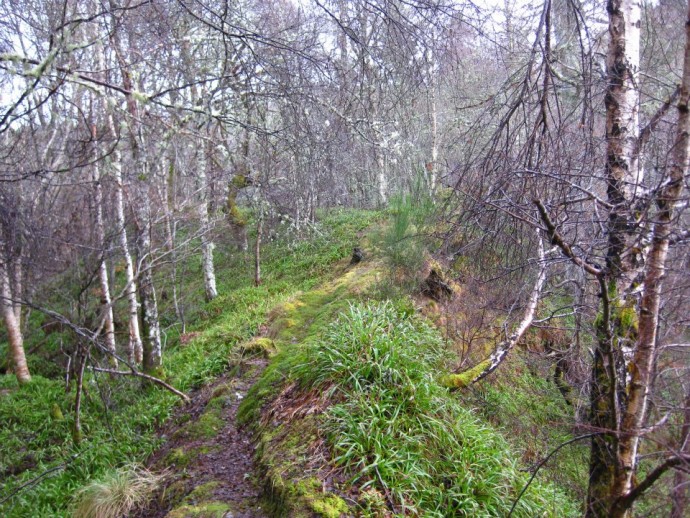 Soon, Dunphail House was nearly upon us. An even larger property than the previous one, we wanted to avoid its extensive grounds. At the next footbridge we stayed on the west bank and followed an increasingly overgrown path through dense forest, with views of the House making us feel like spies watching an enemy base... 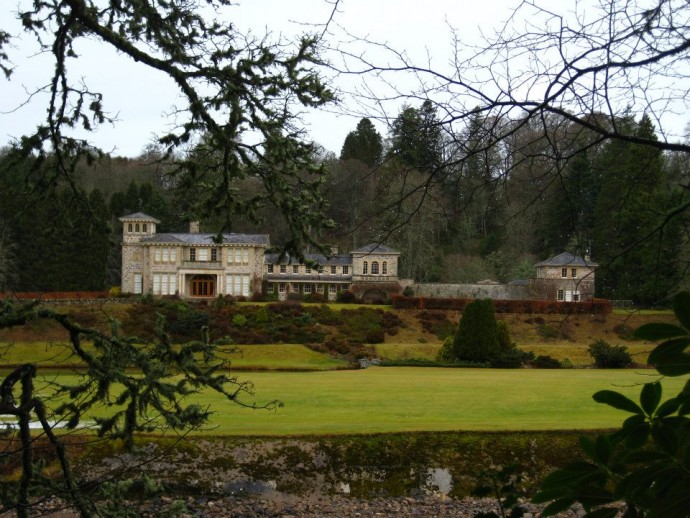 Dunphail House through the trees

So far, so good. However, the next section was a disaster. The path became increasingly impossible to follow, with fallen trees, large bushes and deep mud - eventually reaching a section where landslides had completely wiped out the way forward. The ground was fairly steep and very slippery, covered with mud and leaves, and tree branches at about chest height. It must have only been about 500m, but made for very slow going and we wished we'd run across the perfect lawns on the other side instead.

The track at Kinnaird Bridge was a welcome sight. Here, we crossed back to the east bank having passed the House. A ruined castle marked on the map was better than expected, perched high on rocky cliffs but with a good path up the side. 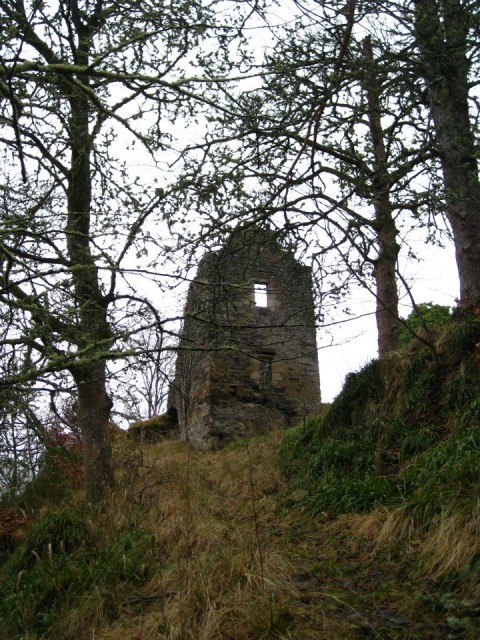 It was surrounded by a perfect natural "moat", probably caused by the Dorback Burn cutting through a meander in years gone by. 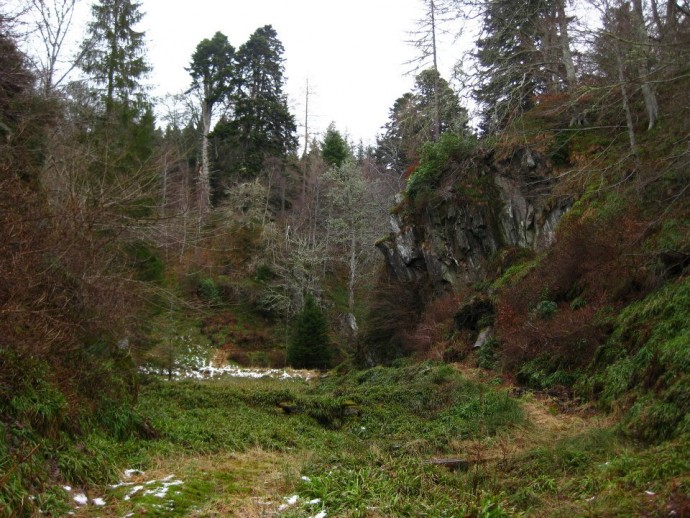 A handy path followed the "moat" in an attractive circular route around the castle's crags, before leading without incident back to the Dorback Burn. The next section, staying on the west side, was superb, banishing the thoughts of the last section. The excellent path weaved its way along the gorge sides, often cut from the rock, with a number of waterfalls cascading down the cliff face - the path bypassed some of these with slightly dodgy bridges on the down side of the waterfall. There was even a deep valley leading off to the right with the promise of a cave marked on the map, although we didn't explore it. The Dorback Burn tumbled along below. A scenic hour later, and we reached the next crossing point of the gorge. Straight away, we could see that we'd be remaining on the west side. The wooden bridge, high above the gorge, was supported by stilts on two rocky outcrops in the middle of the burn. The second of these stilts had partially buckled and it looked highly likely that it would collapse with the weight of a walker. As is often the case in these circumstances, the photographic evidence doesn't (at all!) do justice to the danger factor... The gorge gradually narrowed, and the path began to deteriorate, bringing us miniature versions of the Bridge of death... The next section had us seriously considering turning back and crossing the Bridge of death. On a particularly narrow cliff path, an old wooden bridge crossed a minor gulley supported by metal wires. One of these had snapped, rendering the bridge useless. In addition, the approach to the bridge was a sideways-tilting rotten boardwalk threatening to plunge us into the gorge. Again, the picture doesn't do it justice, but there's a sheer drop of several metres behind the foreground pine tree to the right of the bridge... Having gingerly passed that section, the remainder of the route to Logie Steading was deeply unpleasant. The path was largely blocked with rhododendrons, eventually becoming so overgrown that we diverted up the (muddy) hillside to slightly flatter ground overlooking the gorge. Tarmac was reached with some relief, especially as it led to the excellent cafe at Logie Steading.

An long lunch stop later, we followed the Findhorn back south to its confluence with the Dorback Burn. This section was a waymarked walk, so progress was good all the way to Randolph's Leap. Flood stones almost impossibly high above the water marked the height that past floods reached (a terrifying prospect) in the gorge. Ironically, the waymarked walk was less scenic than the previous paths - and less exciting, although with smaller risk to life. There were some pleasant views along the Findhorn, which was notably calmer than the Dorback Burn. When the main waymarked walk branched off back to the road, we were worried it'd be back to the difficult conditions experienced earlier in the day. Happily though, the path remained excellent all the way to Daltulich Bridge, with evidence of recent path improvements where landslides had affected the old route. Looking back from before Daltulich Bridge

The path continued beyond the bridge, but we turned off to begin the cross-country section back to the car. After a short road section, tracks led over the Hill of Relugas back to the start. This was tiring at the end of the day, and the top of the hill alternated unpleasantly between snow, deep mud and puddles, and snow overlying deep mud and puddles. We also passed a ranger (?), in fading light, who seemed surprised to see two humans in such a random and unrewarding place. Never mind, it didn't take away much from what had mainly been a very rewarding day.

With hindsight, we'd do the following things differently:
- cross to the west side of the Dorback burn at the footbridge just before Dunphail House
- after exploring the ruined castle, cross the Kinnaird Bridge and use the east bank path instead of the west, in order to avoid the various bridges of death
- attempt the last section in drier weather!

Despite some aching limbs and some very muddy boots, the Darnaway Forest has now been conquered!

I must admit, that boardwalk and "shoogly bridge" would have turned me back too!

Interesting looking wander just a pity aboot the state oh the paths and bridges. one for the summer time if we get one at is

Thanks - yes, weather was dry on Saturday but the ground underfoot wasn't...

I'm glad to see a report from this area. There are some lovely walks along river Findhorn, but sadly this part of Moray is often overlooked and forgotten, such a shame!
We walked most of your route (in different combinations) last summer & autumn. The trickiest part was getting to the ruined castle - the slopes are wet, slippery and very overgrown. We managed to climb up and explored the ruins - sadly they are in very bad condition and most likely will collapse at some point... Here is my report from that trip:
http://www.walkhighlands.co.uk/Forum/viewtopic.php?f=9&t=25874