Loweswater 3.gpx Open full screen  NB: Walkhighlands is not responsible for the accuracy of gpx files in users posts

This weekend saw the return of my walking partner John. It's been a couple of months since we've both been available for a Saturday yomp and therefore we planned a walk that wasn't going to kill us off and provided a few escape clauses.
With a limited choice (only 21 Wainwrights left on my tick sheet), I decided the Loweswater Fells fitted the bill being not as high as some of the others and a choice of valleys leading back to Maggies Bridge when the going got too tough.

Starting with Burnbank Fell, we made our way from Maggies Bridge (where we parked) and made our way to Watergate Farm. From here we took the steep left path up through Holme Wood to a high level traverse crossing Holme Beck and round to the the northern flanks of the fell. 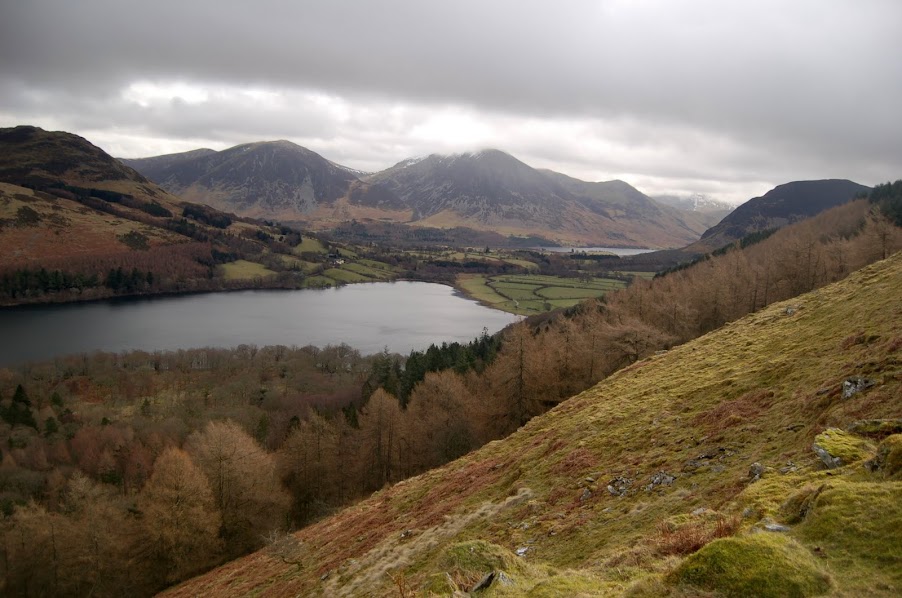 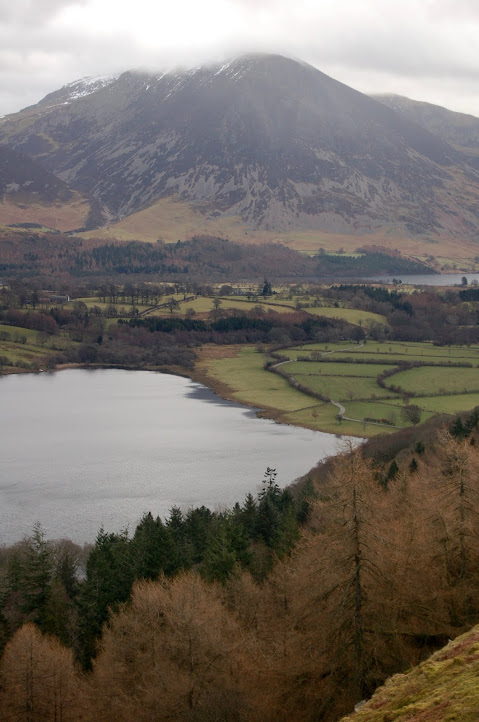 Grasmoor over Loweswater & Crummock Water from flanks of Burnbank Fell 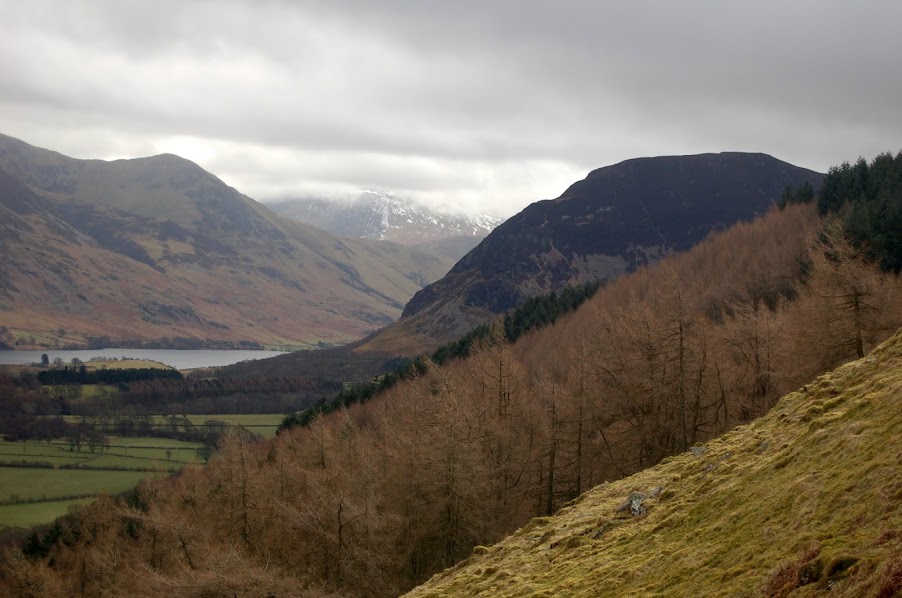 Edge of Melbreak over Crummock Water from Burnbank Fell ascent 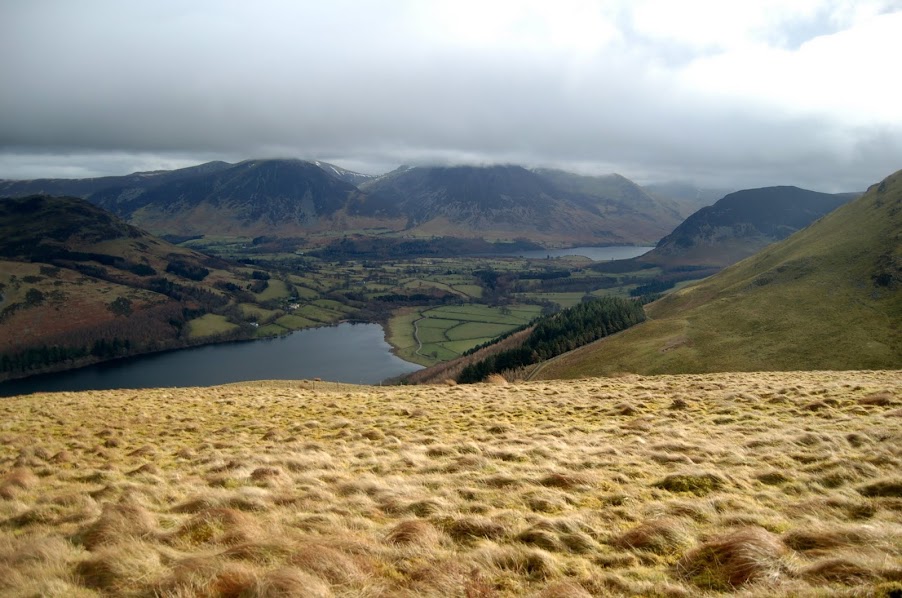 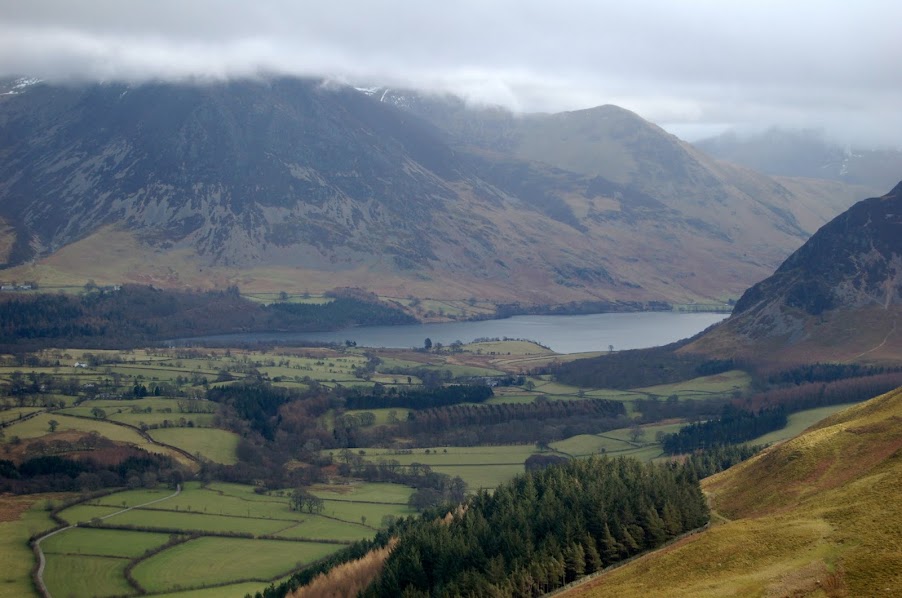 A number of geocaches were claimed along this stretch and some great views down over Loweswater and Crummock Water and the surrounding fells, including views over to Whiteside & Whiteless Pike which are on my "To Do" list.
From a gate at the end of this track we proceeded left, climbing up onto the western nose of Burnbanks summit up a number of steep grassy banks before it levelled out across to the summit itself. 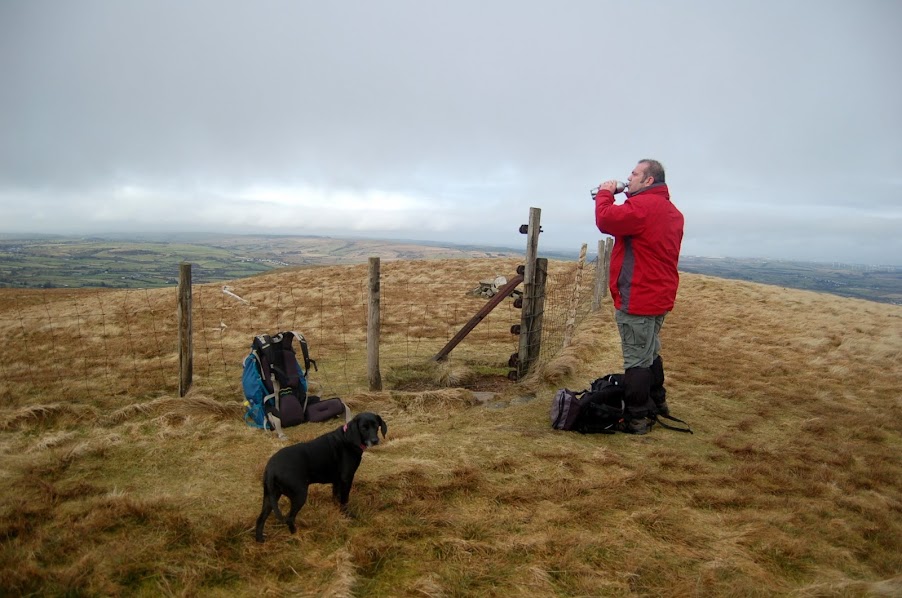 The fence line from Burnbank summit gives a good guide across the Loweswater fells to our next two summits. The ground was better than expected across to our next summit of Blakes Fell following all the rain and snow we have had in recent weeks. The weather was still in petulant mood however and the mist closed in as we approached the top requiring us to wait for breaks in the cloud for views over Congra Moss and on towards the Buttermere Ridge and Great Borne (visited two weeks ago) 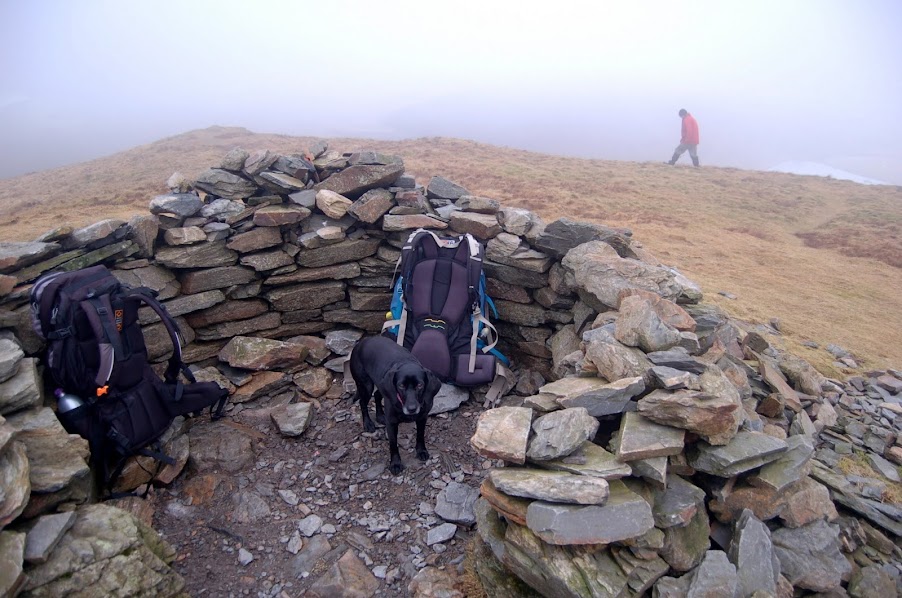 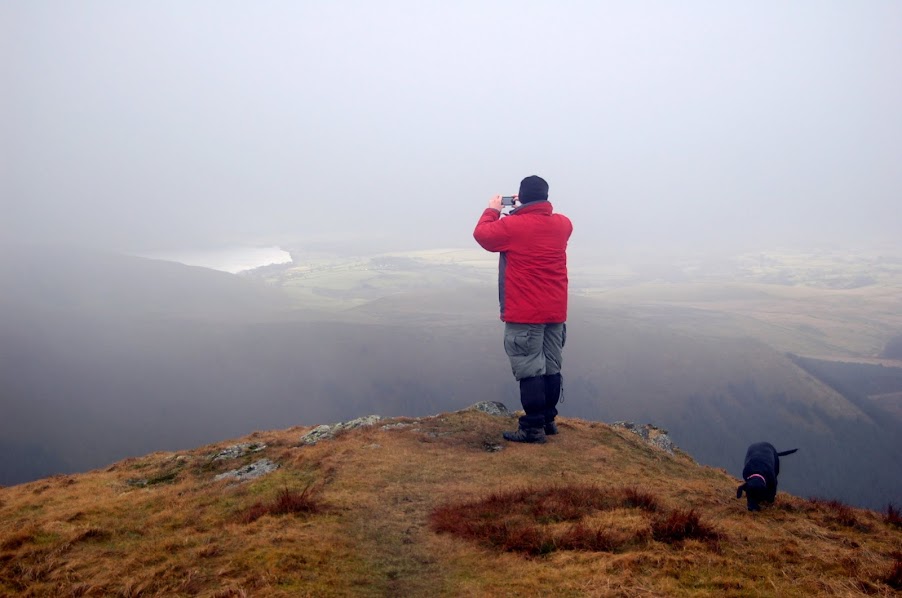 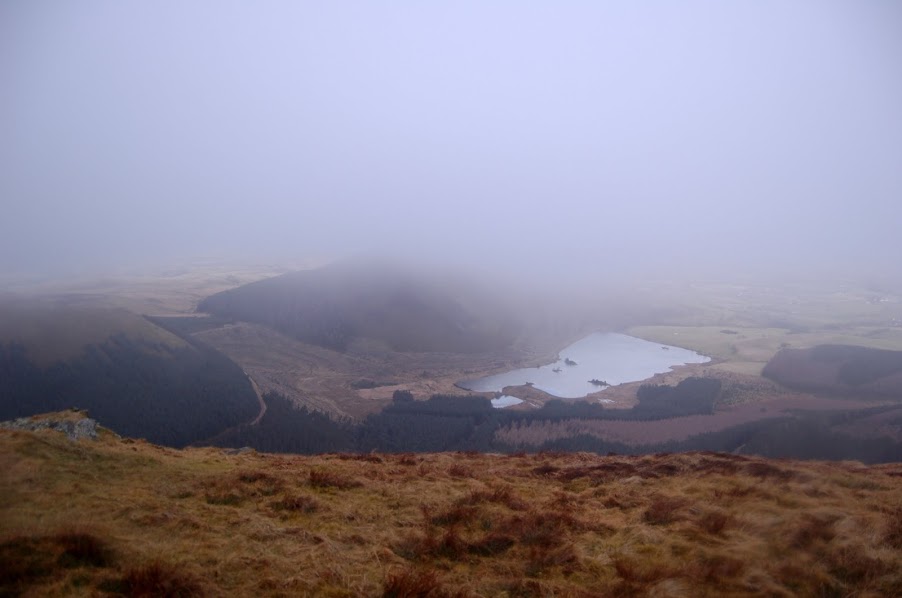 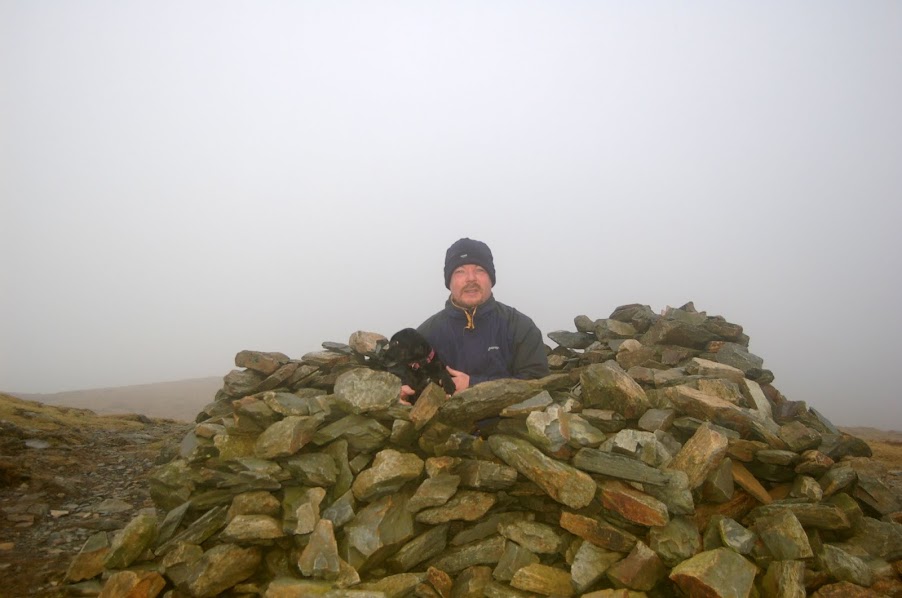 Hunkering down from the wind on Blakes Fell

Another high level cache was grabbed before rejoining the fence and on towards our last summit for today of Gavel Fell. John was feeling the effects of his absence from the fells and I knew that Hen Comb and Melbreak were next in line. 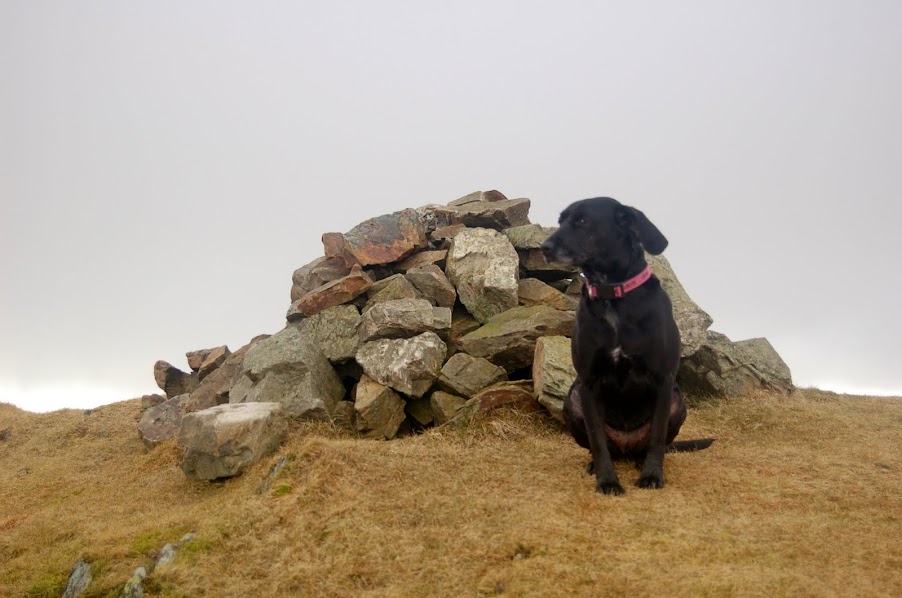 What do you mean its todays last fell ?? ... Damson on Gavel Fell summit 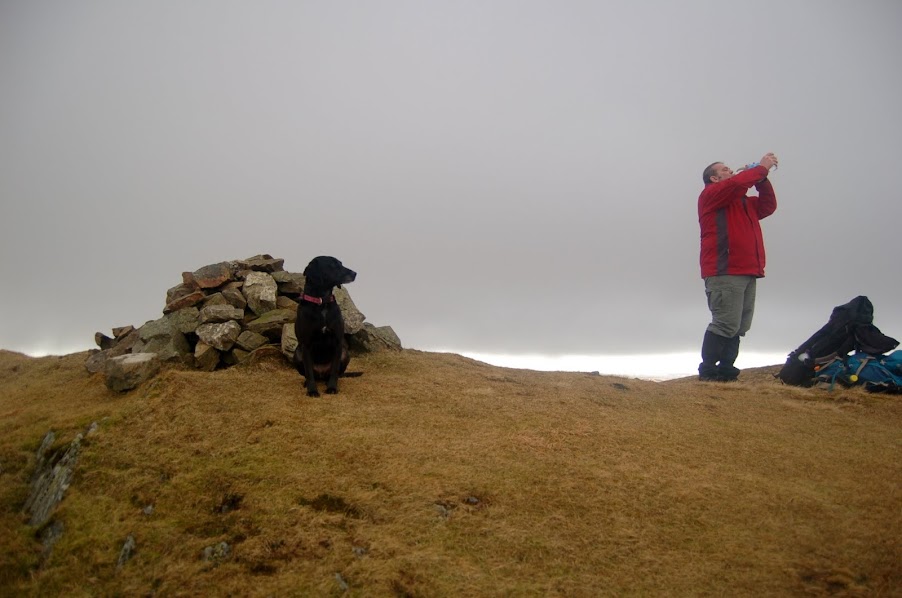 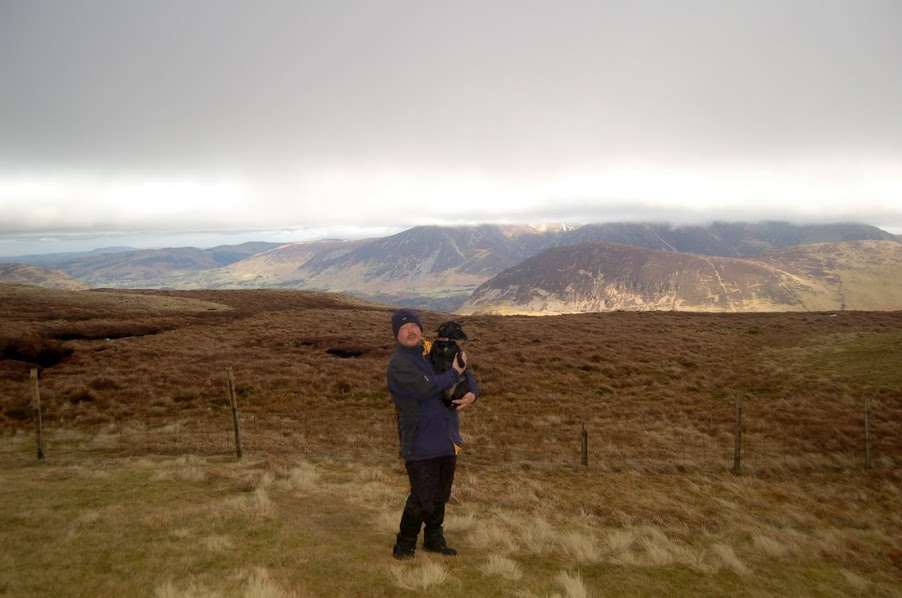 Damson & I on Gavel Fell

We made course for the valley between Gavel Fell & Hen Comb following Whiteoak Beck back down to Loweswater. The path was somewhat patchy in areas and led through some very boggy grasslands. Initially we dropped right down to the beck edge before the feeds into the beck started to break up the land making progress difficult. A higher path was found a little lower down the valley and provided a much easier and quicker descent. A few more photos back to Melbreak & Hen Comb were captured before we reached High Nook Beck which we followed all the way down to Maggie's Bridge and the car. 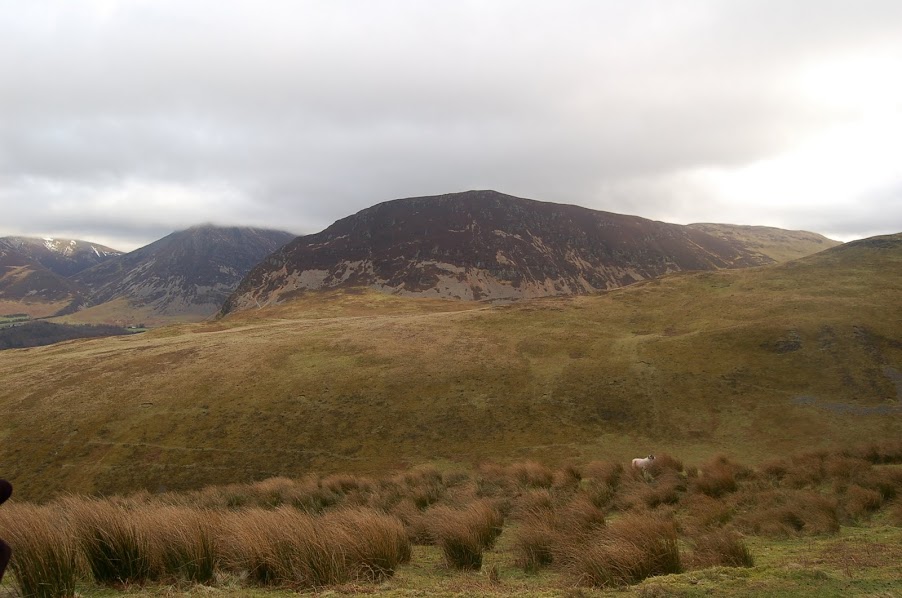 Melbreak from our descent path 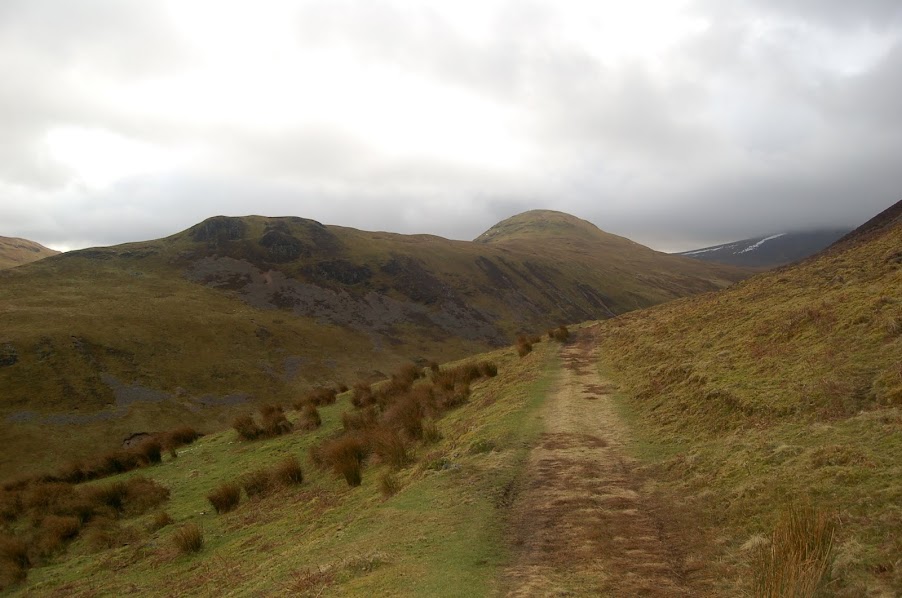 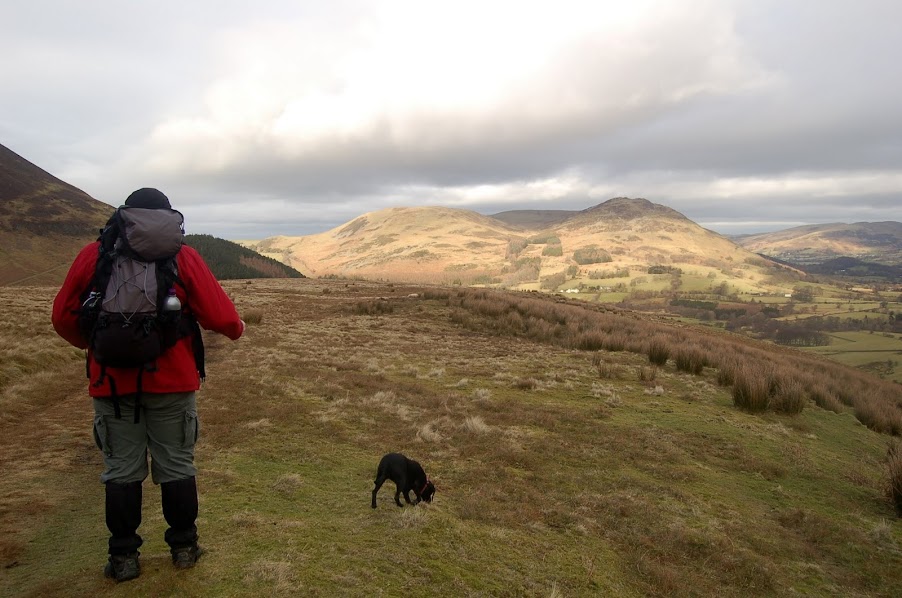 John heading back to Maggies Bridge with Fellbarrow in background

We'll be back down here to finish off 4 of the 5 remaining in the area leaving Rannerdale Knotts till the end and a summer yomp with family and friends and a champagne picnic. We'll be planting a special 214 geocache on that day too so I'll be coming up with some inventive "First To Find" ideas in the coming months.

I'll add some words in tomorrow !!

Some nice pictures there, Phooooey. Those are attractive fells around Loweswater, with some good views. Is parking still free at Maggie's Bridge? More and more Lakeland car parks seem to be attracting a charge.

I'm heading for the Loweswater area soon, this report has got me looking forward to it.

Lovely shots as always Phooooey, I saw this last night but came back for the words today

Parking is still free at Maggie's Bridge however there are only enough spaces for 7 or 8 cars max and we only just got there in time at about 9:30.
Delay to words caused by excessive breakout of winter sun, meaning the missus and I went out for a trip to Bardsea on the geocaching trail ... Oh ! and Damson of course !

Words now in place, just in time for the footy on telly ... hurrah !!

Keep going Phoooey, at least you could see where you were going, which is more than we could when we did them! You didn't find my camera did you? I lost it somewhere between Blake and Gavel Fell, mind you we were lost at the time, so needle in a haystack springs to mind

Looking to get to single figures first weekend in March in Wasdale that's if weather etc etc. Cheers Dave

Sorry, did read your report and we were probably some where near but it didn't jump out at us. If only it was in a geocache box !! We'd have got it then

As always, I enjoyed your report and photos

Craig, what are you going to do when the last one has been completed

I'm just back from a few days by Ullswater; FANTASTIC weather!!

Hi Susie,
The main reason I got a GPS device at Xmas was to start this geocaching lark and use it as the inspiration to get to a few more places in the Lakes without necessarily having to climb over summits. As John has just crossed his 50 mark, I can combine the two for a while. The geocache list has a cache at all the tarns in the district so that might make a good challenge. Anything to get out of housework ... sssshhh !! don't tell Ellie !!