Yr Aran - Carry on up the Khyber!

Yr Aran - Carry on up the Khyber!

Yr-Aran-via-Watkins-Path (1).gpx Open full screen  NB: Walkhighlands is not responsible for the accuracy of gpx files in users posts
For months we had planned a get together with Twitter friends to spend the weekend walking in Shropshire and Snowdonia last weekend. As the weekend drew nearer the weather forecast predicted increased doom. There had been snow, thaw and more snow topped off with a fair amount of rain. Never the less we pressed ahead. Perseverance was rewarded with a relatively dry day on the Long Mynd with an inversion or two. Dare we hope for a similar turn of fortune on the Sunday? Eh, NO! It was miserable and so was I. Grand plans were replaced with a soggy, windy amble around Cwm Idwal. Stunning even in these conditions but it was no day for staying out and we met many who had turned round from the path up Devils Kitchen and Y Garn. So when the forecast for yesterday remained steadfastly glorious and the MWIS site promised greater than 90% chances of clear summits in Snowdonia, I was determined to head out. It's a decision that has resulted in Beans on Toast being the gourmet dish of the week as we couldn't really afford it but life is too short as are the good weather windows.
The drive into Snowdonia saw me grinning from ear to ear as the views of snowy high peaks unfolded, bathed in sunshine and clear as a bell. A stop for photies along the way was a given. 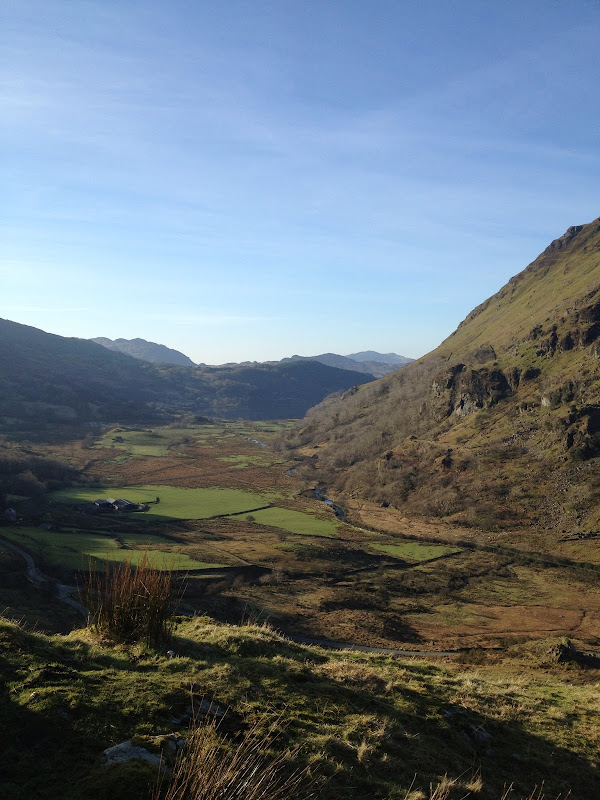 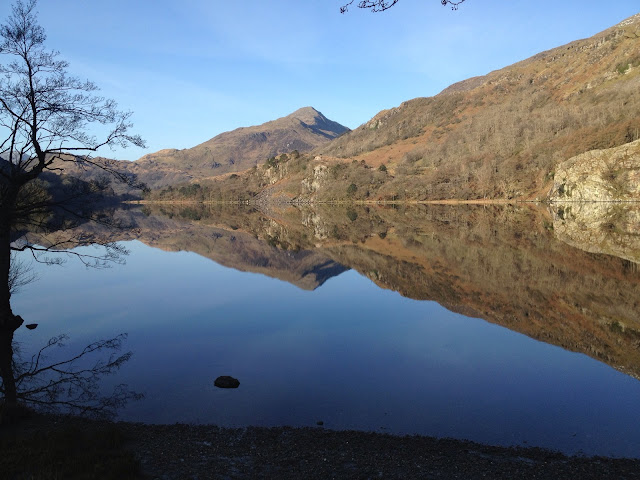 Yr Aran reflecting in the millpond that was Llyn Gwynant - a very promising start!
We parked up at Pont Bethania car park (£4 for the day and worth it!), shouldered our packs and headed left out of the car park across a wee bridge and along the road for a few yards before crossing over to the start of the path, sign posted Llwybr Watkin Path. The path ambles through a wonderful wood, over two foot bridges and then through two large gates before we came out into open countryside. 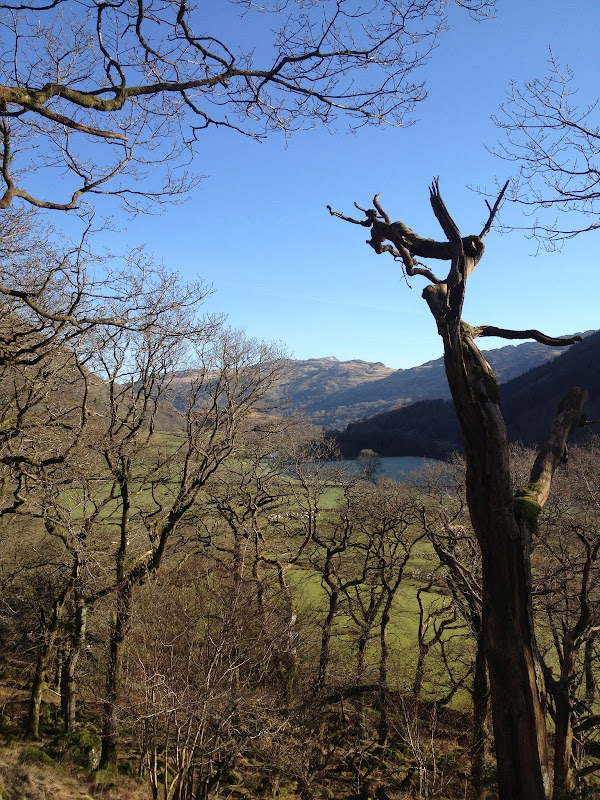 Moel Siabod from the woods of Hafod y Llan
The path gently meanders up towards Cwm Llan, past a crevice leading up Clogwyn Brith which used to contain a tram line for taking wagons of slate down to Pont Bethania. about half a kilometre further on we rounded a bend and saw the whole of Cwm Llan and it's waterfalls laid out before us. On the opposite side of Afon Cwm Llan are the remnants of an old crushing mill that was used by the Hafod-y-Llan copper mine, the remains paying eerie testimony to the areas industrial past. At the moment there are diggers beside the ruins which are being used to construct a new hydro electric scheme. According to the signs posted along the path it will be finished in 2014 and provide all the electricity for the National Trust in Wales once completed. It's difficult not to view it as an intrusion at this beautiful site, however the mines certainly set a precedence and evidence of mining is all over the cwm, which incidentally was the location for the Kyber Pass in the film Carry on up the Khyber! 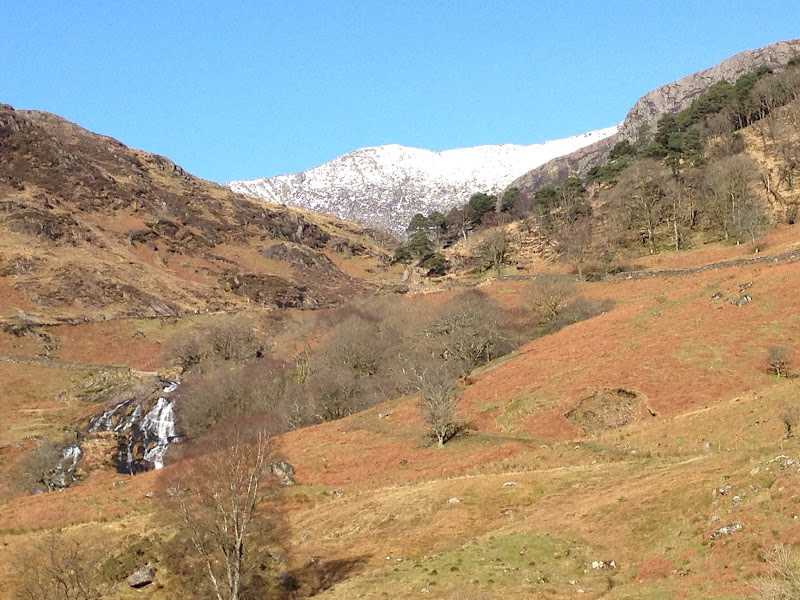 Cwm Llan with a snow capped Yr Wyddfa in the background 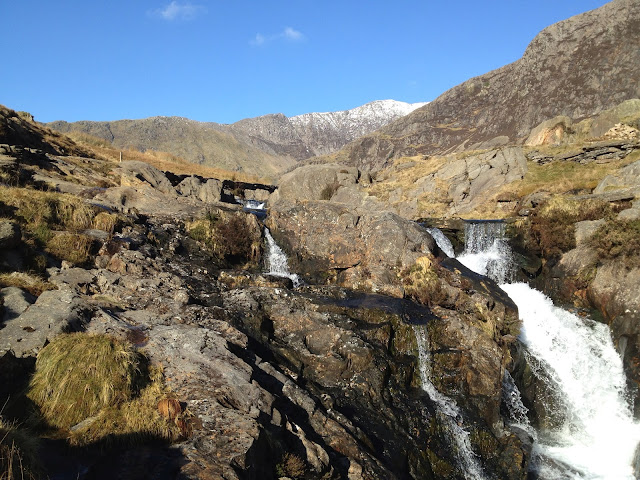 Waterfall by the crushing mill 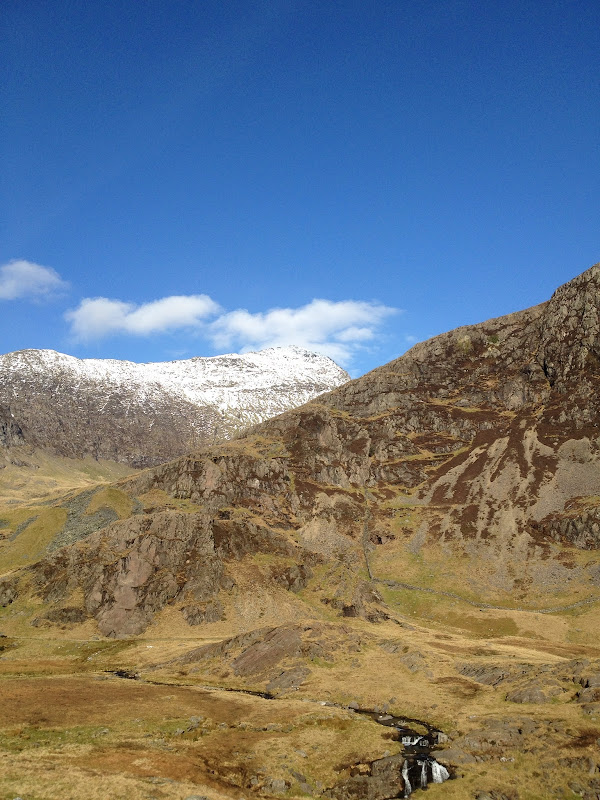 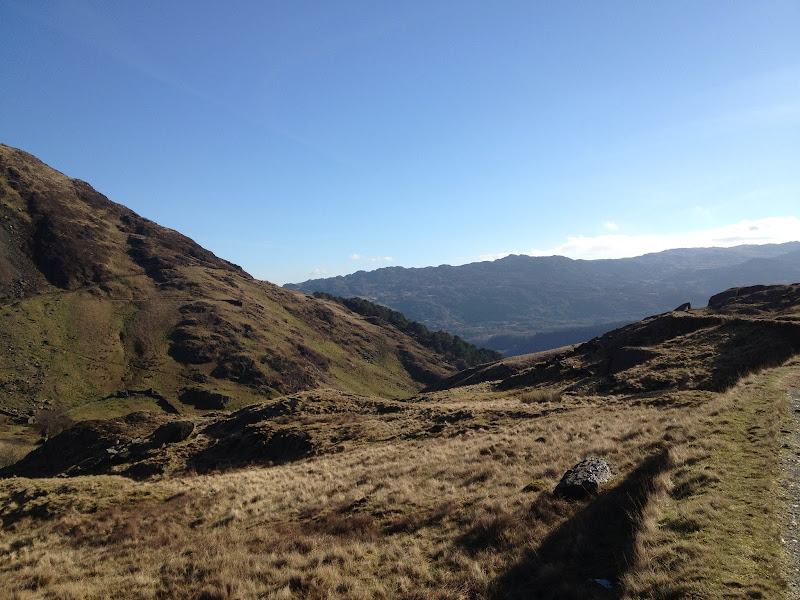 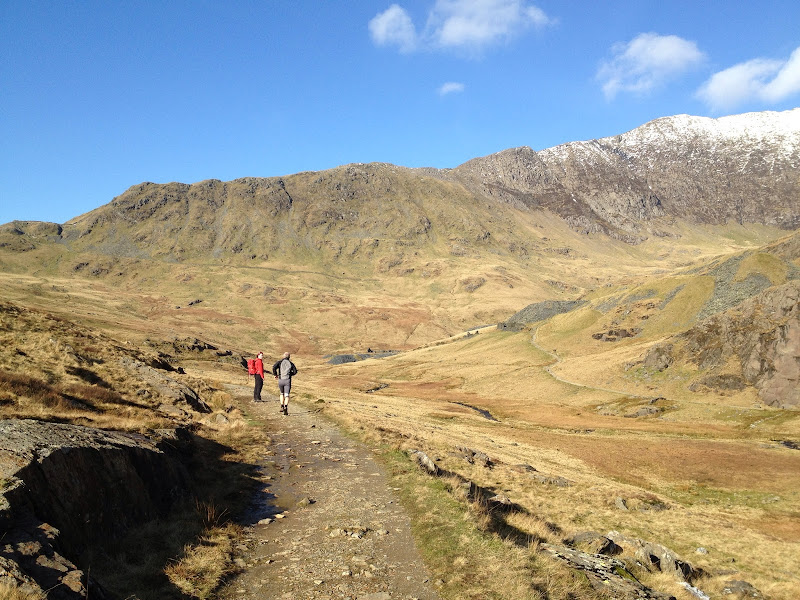 Once past the mill the path forks and we headed left, up on to the eastern flank of Yr Aran following the tramline for about a kilometre before continuing up the flank to Bwlch Cwm Llan. It was very wet underfoot here and ever wary of my bog dunking habits we trod a careful line to avoid the worst of the bog.
Once we reached the drystone wall at Bwlch Cwm Llan it was time for lunch in the lee side, out of the wind. What is it about dehydrated packet pasta which I ordinarily really dislike yet tastes so good on a hill? A sandwich and a cup of freshly brewed coffee and we were ready for the next part of our adventure.
I had decided to approach Yr Aran from a more westerly direction so although we could see a stile and a wall leading very steeply up the east flank we walked around a teeny little llyn, past more quarry works and hopped over a fence to walk along what looked like an old causeway. There is no distinct path up this side of Yr Aran but I was aiming to walk past the steeper north facing cliffs of the mountain and pull up on to the ridge a couple of hundred yards south west of the summit. It was boggy at first and then very steep, the ground underfoot frosty because of it's north facing aspect. The rocks peeking out were also covered in a thin layer of ice. It was definitely interesting! 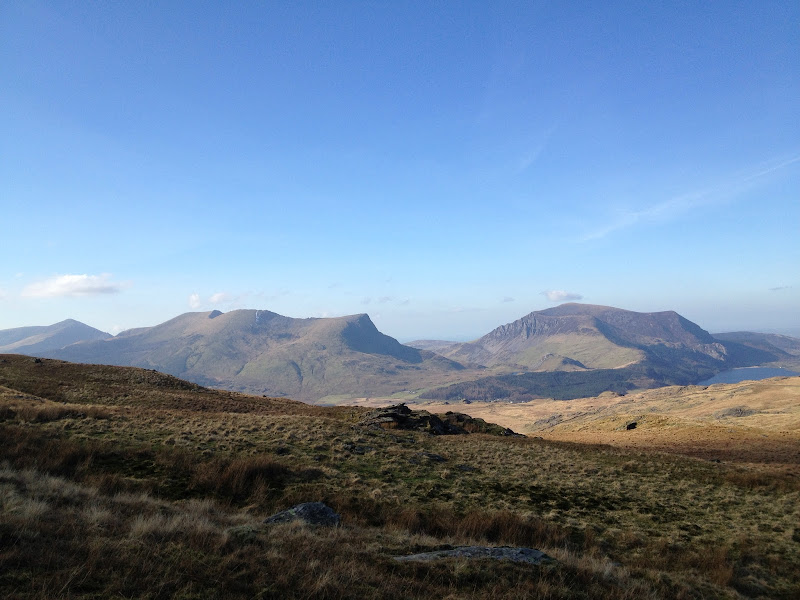 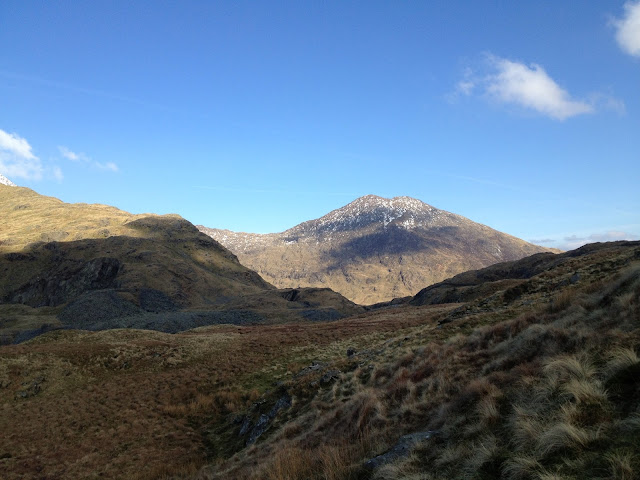 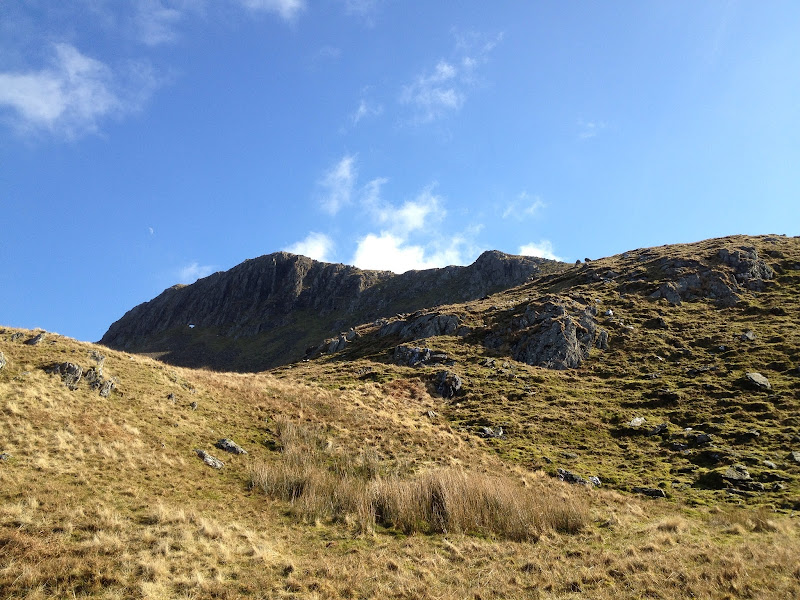 Yr Aran - steep north facing cliffs
Once up on the ridge it was just a short but windy hop up on to the summit where, after having spent most of the day in just a fleece and even getting a suggestion of sunburn, it was time to put some layers on.
The walk up to the summit looked like it was going to be pretty airy but is in fact quite broad and the rocky bits can be avoided. The grass was slippery though so my self righting mechanism was required a few times in order to stay up right. The views all the way up were breath taking and it was the first time I have seen such clear views of the Nantlle Ridge, Mynydd Mawr, Moel Eilio and all the surrounding hills. a number of trips are already being planned! 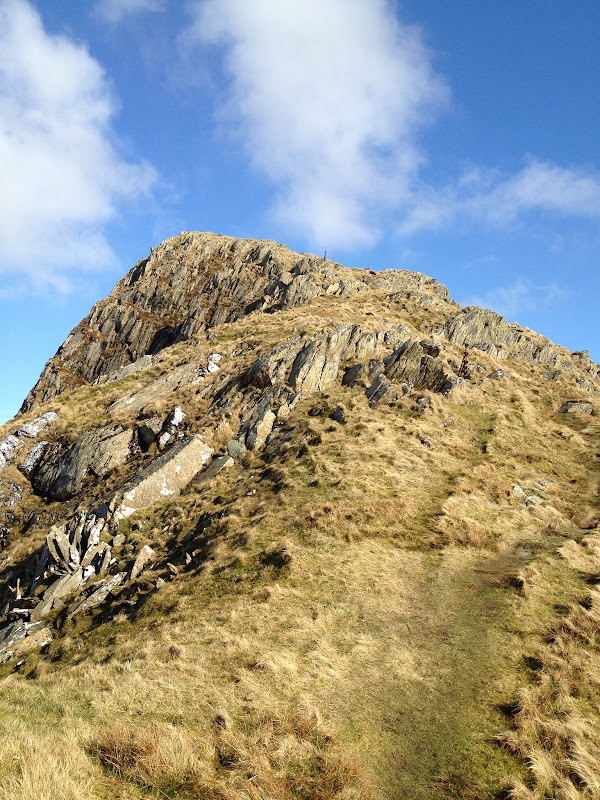 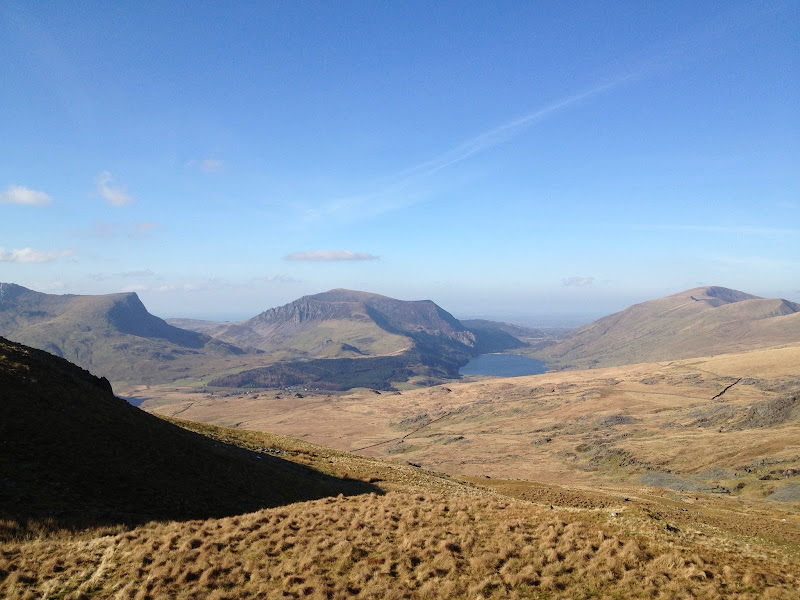 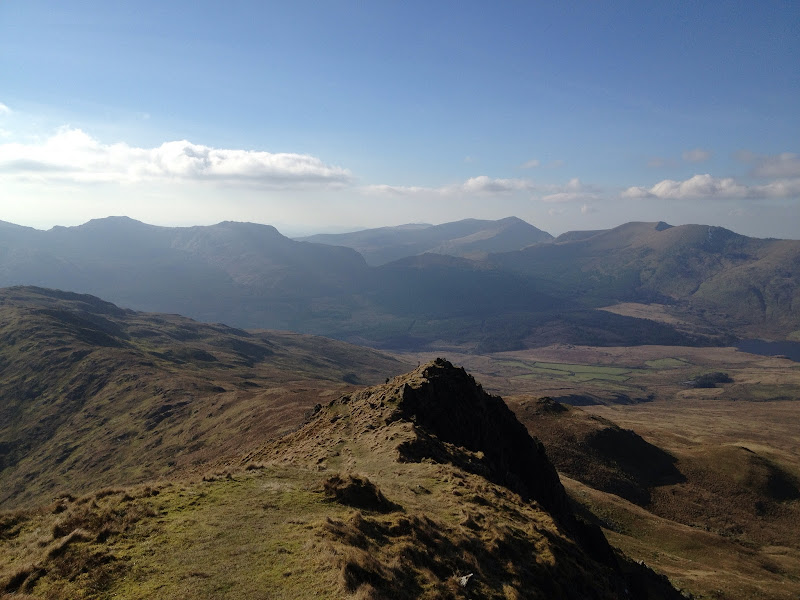 Moel Hebog & Nantlle Ridge from the summit of Yr Aran
This has got to be right at the top amongst my happiest mountain days. Spur of the moment stuff that brought together perfect conditions, a great new discovery and views that make my heart sing. Just perfect.

Mynydd Mawr, Moel Eilio, south spur up Snowdon and Y Lliwedd - what a panorama!
We had taken our time getting up so it was time to head off this gorgeous mountain. This time we headed east, down a rocky path to pick up the wall seen from Bwlch Cwm Llan earlier. It makes for a handy rail all the way back to the bwlch. I was grateful for it too as it was very steep in places and some of the rocks were icy.
We hopped over a couple of stiles, through some boggy sections and from the bwlch it was back down in to the cwm following a faint path to the tramway. We saw a couple of walkers on this trip but in comparison to the main drags up Snowdon it was empty.
An easy walk back to the car park gave us ample time to reflect and chat, watch canoeists in the rapids beneath the waterfalls and enjoy the last hours of daylight.
If you've never considered Snowdons backside I can only recommend it! Carry on up the Khyber 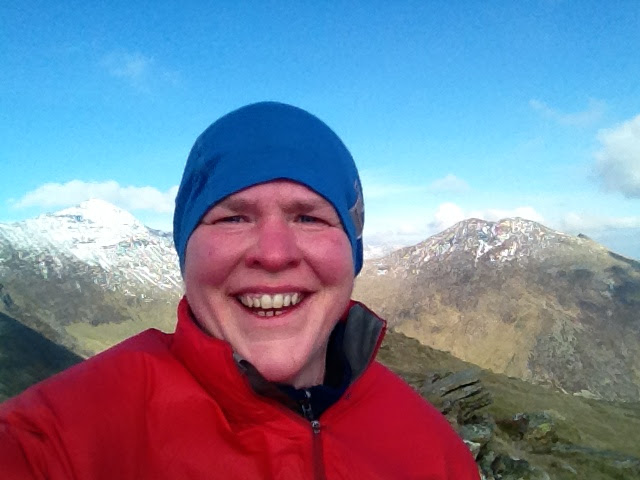 Happiness is a cloud free summit in Snowdonia 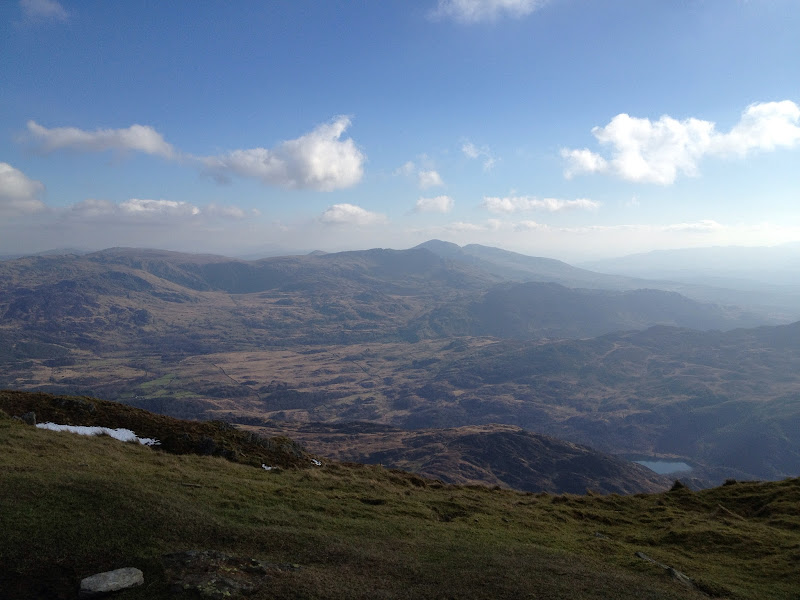 I think this is looking south from Yr Aran but can't identify the peak... 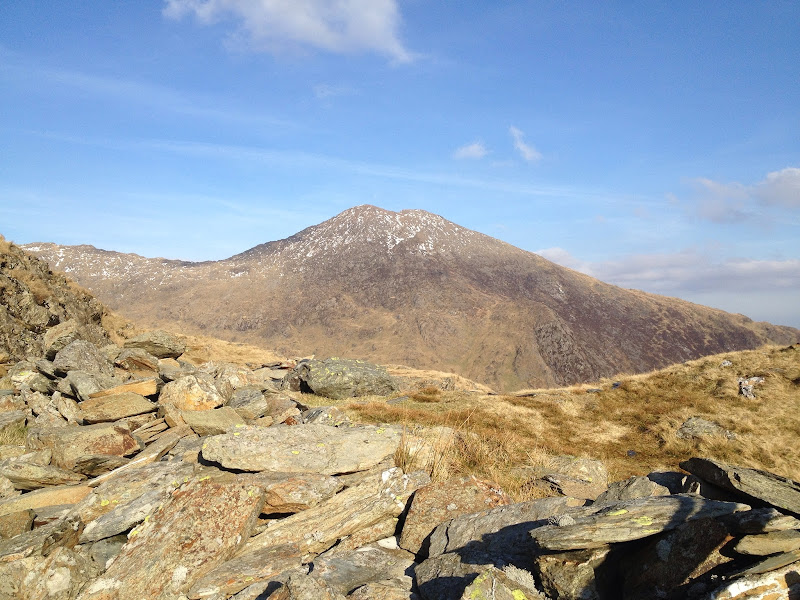 This however is Y Lliwedd - beautiful! 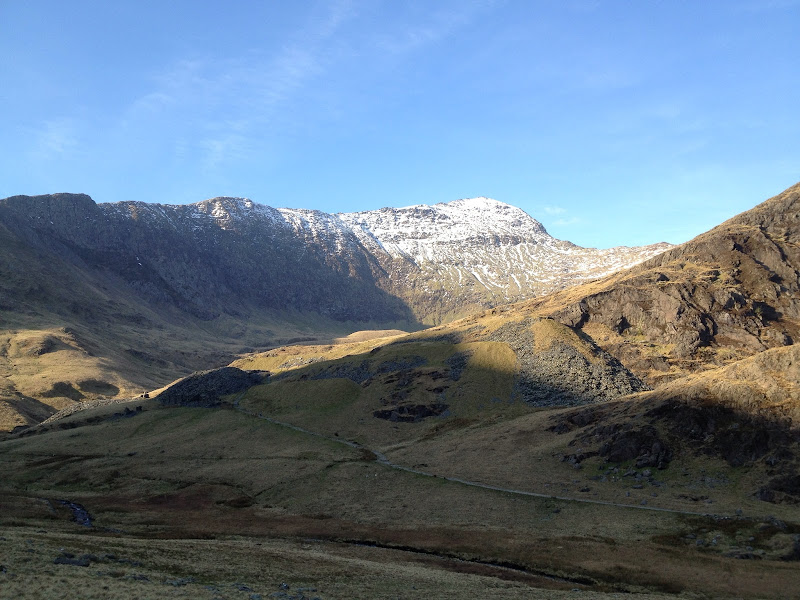 And one final Snowdon shot bathed in afternoon light

. Almost exactly a year since I was last up there - also a great day, although not quite up to these standards. I thought the weather was only supposed to be good in the far NW of Scotland on Sunday but it seems to have turned out brilliant everywhere

The unidentified peak to the south is Moelwyn Mawr.

Another stunner Smirnie, beautiful photos all the way and such wonderful weather ....are you sure you're in the UK

Hi Malky, thanks for identifying that peak for me and yes it was a complete belter of a day. Still grinning now

I only realised a couple of days out that the weather was looking good and when it stayed persistently good I had to head out. So happy I did.

Chris, we've had a couple of days sun just now so that's spring out the way. I expect a few more days of sun around April which will be summer and then it's back to business as usual. Warmish and wet followed by coolish and wet - who me? Cynical? Never!

Absolutely stunning photo's. Looks like you had a great day for it.

I'm sure it was colder than the photo's made it look though.

Ibex wrote:Absolutely stunning photo's. Looks like you had a great day for it.

I'm sure it was colder than the photo's made it look though.

It was an absolutely cracking day and for a lot of the walk we were in base layer and fleece as for the first time this year the warmth of the sun was starting to come forth. Oh, and I definitely walk hot!