A combination of bad luck, bad weather, illness and laziness had resulted in a fairly idle start to 2013 for Basscadet and myself. Therefore, to eliminate some of the bad weather influence, we decided upon a weekend of lower level backpacking between Glen Lyon and Loch Rannoch. We met in Fortingall on Friday night, left one car there and drove up Glen Lyon to the picnic area at Innerwick. A short wander up the track and a camp spot was found for the night which was cool and clear.

lyonRanoch.gpx Open full screen  NB: Walkhighlands is not responsible for the accuracy of gpx files in users posts
In the morning we packed up, briefly returned to the car and set off over the bridge to the track on the other side of the Allt a' Mhuic signed to Loch Rannoch. The track rose at a steady angle and we soon worked up a heat in the still air. The track left the forestry as it passed through the Lairig Ghallabhaich and the land changed to open moorland. We had a quick snack at the high point before beginning the long descent to Loch Rannoch. We arrived at lovely Loch Rannoch around 2pm and grit our teeth for the least anticipated part of our walk - the 6.8km of tarmac to East Tempar.

We considered camping along this section as our feet began to ache but decided to push on to the start of the track back over to Glen Lyon. We camped a short way up the track out of sight of the houses behind a wall. A fine night was enjoyed despite almost running out of gas We made a lazy start in the morning and were not on the road again until after 10am, but it was a fine day with just a light cooling breeze. Scheihallion provided a constant companion, it's summit always clinging to the clag.

At the bealach we stumbled across little Blar na Feadaig bothy. It looked little used but was dry and clean with a shopping basket for fire grate. There were no paths marked on the next section along the Allt a' Choire Glais and it proved to be so on the ground. The ground was tussocky heather and boggy but we made decent progress down to the cave Uamh Tom a'Mhor-fhir. Except we couldnt find the cave

. Five minutes of searching and humming and hawing failed to yield site of the cave entrance. We concluded that it was probably covered by snow but the sense of disappointment was palpable.

The next obvious landmark was Glenmore bothy just a few hundred yards up the hillside. However, in our way was the Allt Creag a' Mhadaidh which was sizeable wee stream. Undeterred, BC picked her route across with little fuss. I was less enthusiastic but, after a short recce upstream, followed her lead with less drama than I imagined. It was a slow trudge up to the bothy through tiring snow. The bothy was in reasonable condition but seemed to have some water ingress in the western room and the stable quite literally had a river running though it. 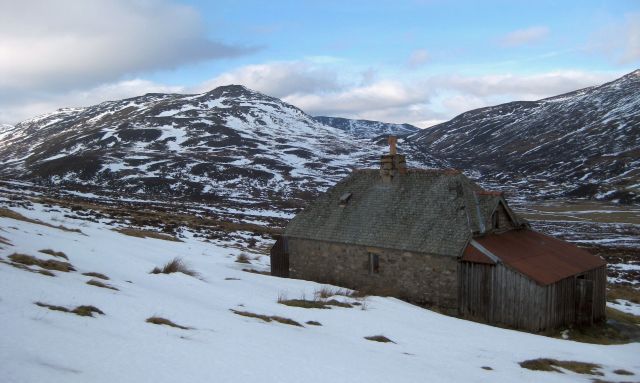 Our route was meant to join a track near the bothy but we couldn't find it so crossed snow and heather to join it at the Allt Coire an t-Sionnaich. On this stretch I managed to drop through the snow into a bog soaking my feet over the top of my right boot

. Fortunately, I had dry socks in my pack which minimised the discomfort.

We were now faced with the final ascent of the trip to the bealach at point 708. This was a bit of a slog through more snow with weary feet and legs. Still it had been a fine day so far and it was all downhill from here. The track was hard to follow at times buried under the snow but the route was pretty clear and we had picked up footprints to follow and ease the effort of breaking trail. We had a final break just above the snow line overlooking Loch Tay and into dramatic Glen Lyon.

The final descent along the track to Fortingall was easy graded and only interrupted by a few nosy cows.

This had been a fine weekend with some good weather. The absence of ticks on the Munro map was not felt once in this often remote and lonely area in Scotland's heartland

. Some nice valleys and a couple of bothies I wasn't aware of. Always fancied a nosey around the other side of Schiehallion.

Cracking comeback Leithy, shame you couldn't find the cave but it could have been worse - you could have fallen through the snow into it

) Not many bothies have running water....this one must be upper class

Lovely report! You are right! Sometimes a bit of low land walking can be equally nice. Same you never managed to find the cave.

. Some nice valleys and a couple of bothies I wasn't aware of. Always fancied a nosey around the other side of Schiehallion.

Me too, but to be honest, I was a little bit disappointed.. Not nearly as bonny as it looks on the map, or from afar

ChrisW wrote:Not many bothies have running water....this one must be upper class

ChrisW wrote:Great weekend with great company and lovely pics along the way - what more could you ask

Mountainlove wrote:Lovely report! You are right! Sometimes a bit of low land walking can be equally nice. Same you never managed to find the cave.

Aye, just nice to get out

Seems like if I'm not ill, the weather is too rubbish & windy to get out of late

Hopefully this will be the start of our return to form

As for the cave, there were several deep drifts around most of the steeper bits where the cave was supposed to be, so probably nae chance!

I was beginning to think you two must have got lost somewhere. good to see you back,

mrssanta wrote:I was beginning to think you two must have got lost somewhere. good to see you back,

Not lost, we just took it in turns to get mumps

mrssanta wrote:I was beginning to think you two must have got lost somewhere. good to see you back,

Not lost, we just took it in turns to get mumps

ouch, not much fun. Hope you're soon back to full fitness both of you and back up them hills

Great way to spend a weekend - enjoyed that