After being a member here for a while, and using the website regularly, thought it was about time I contributed to the cause! So here lies my first report...

After setting off from Ayrshire at 5.45am (on a day off!!!), it was off to Glasgow first to pick up my friend, then on to Invervar for about 8.45am. Left the car park for 9ish and set off clockwise aiming for Carn Gorm first. After about 20 minutes it became apparent my new boots were going to tear my heels to shreds (more on that later), but after stopping to tape them up it was onwards and upwards... 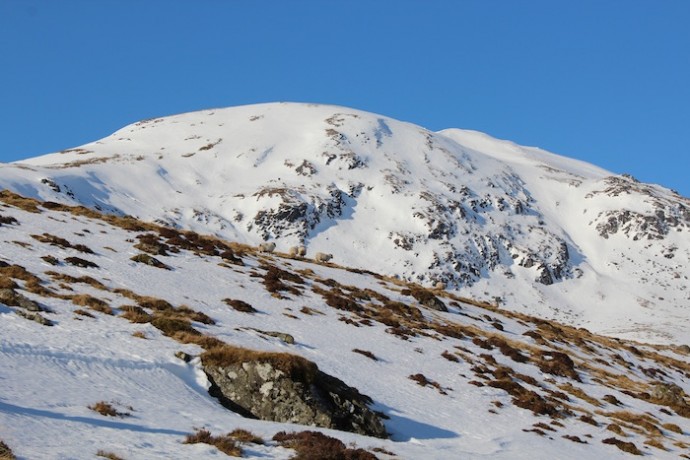 The next mistake of the day was losing my hoody somewhere on the way up Carn Gorm (if anyone finds it - black Ayr RFC - let me know!), but luckily between us we had plenty of layers to go round, plus I seem to maintain an inhumanely warm and sweaty body temperature no matter how cold it is outside. 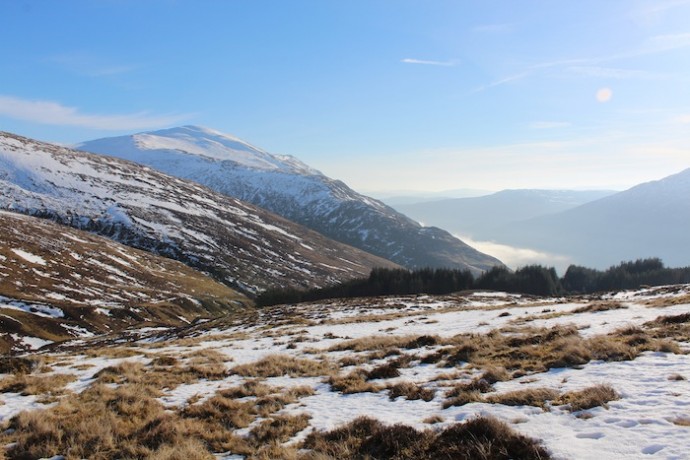 Creag Mhor and the misty valley below 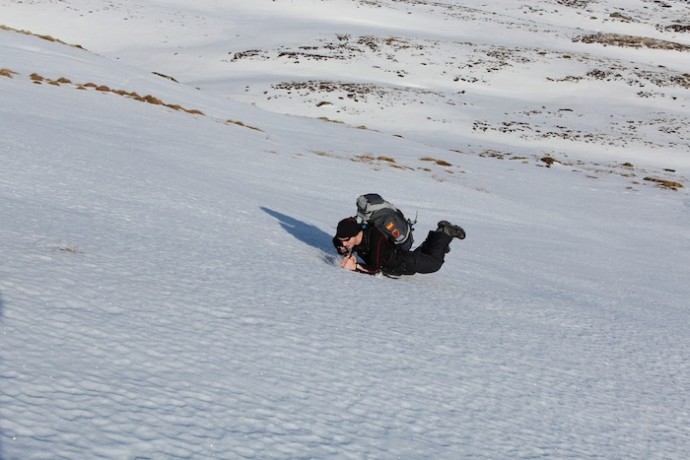 Practising the old self arrest

After reaching the top of Carn Gorm in around 2 hours, we stopped for some food and to take in the views. Definitely one of the clearest days I've been up the hills anyway! Next it was off to Meall Garbh, and its unsightly cairn was clearly in view as I put my crampons on (first time with proper ones) and set off down the flank of Carn Gorm. It soon became apparent they weren't required as Cameron set off sliding on his rear and made it down in about a quarter of the time I did... oh well. Took about 1 hour to get to the cairn itself, where we found the summit strangely clear of snow. Must have blown off? The next part was a bit of a slog, with another Munro worthy summit at over 1000m (but not actually a Munro, presumably due to its proximity to Carn Mairg) and a fair few ups and downs. Great views though, and got to see Schiehallion, which had been a whiteout when I'd been up there a couple of months ago. Once atop Carn Mairg we stopped for some more food and tried to rest my feet in preparation for the last ascent of the day. After picking our way down the fairly steep face of Carn Mairg (looked a lot steeper looking back at it!) we dragged ourselves down to the bottom of Creag Mhor for one final push. By this time the previously hard snow had begun to melt slightly so the going was tougher, but we knew we only had one more to go. Once up on the summit it was one last rest before heading down after a hard but rewarding day's climb. The descent was fairly uneventful, and it was a relief to get the crampons off and do some glissading! Got to the car park about 5.20 just as the sun was setting... Sunset at the car park

Hope you've enjoyed reading my first report on here, and my pics too! Here's one final one for you to 'enjoy'... Lovely day for it and what a differance blue sky makes. Those blisters look painful

As first reports go it was all going really well

until that last photo

A good round this one

OUCH!!
Great report and pictures, I'm hoping to have a crack at these 4 over the weekend so it's certainly whetted my appetite

Excellent first post! If my memory serves me right, I did these four wearing my new Scarpa's for the first time. Didn't have those nasty blisters, but I do remember a week of sore feet.

oooh you did well to keep going with those heels. get compeeds!

Good report, did you call the Estate first? I'm thinking of doing these four on Saturday as they looked good from Schiehallion on Saturday their.

Thanks for your comments everyone!

No didn't call the estate... If I'm honest I didn't realise there was an issue there!? Are they a bit funny about walkers then?

Wore the new boots again on Ben Macdui and Cairngorm during the week and they were fine thankfully, just needed breaking in