An opportunity to get back out on the hills came as a result of the works flexi time. Opted for Slioch as it was near and hoped that the frost would solidify the ground making for easier walking than the alternative wet bog drudge. The weather looked great with a big high pressure and clear blue skies promising great views.
At 715 picked up Andy for his first sortie for a long time. We arrived at the car park in Incheril and got kitted up. We set sail at 830 passed the plaque then along the loch side path. Recommend not taking a bike. Superb views over to Torridon and up Loch Maree. 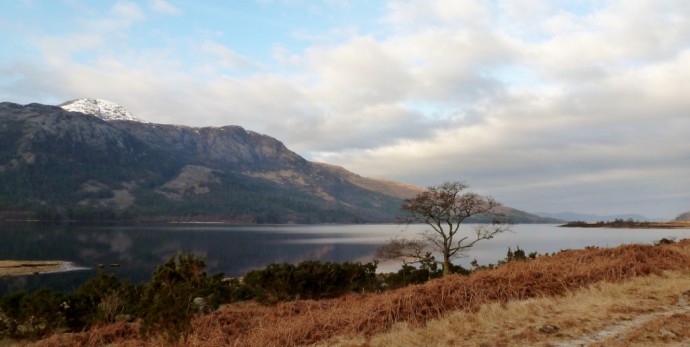 After about 30 minutes we got a glimpse of the target. At the same time we encountered a wee herd of feral goats that were not spooked by another two non lookalikes.

We reached the bridge after about an hour in time to take another couple of images across loch Maree with the still water. We crossed bridge and followed path up the glen alongside the river. Just before the base of the ridge we headed NW up onto the hill aiming for the gap between Sgurr Dubh and Meall Each. After about 50 minutes the entrance into the Coire na Sleaghaich was reached. Photo opportunity. Unfortunately the clouds were moving in and it was not possible to see the summit or even the nearby top of Sgurr an Tuil Bhain but hey ho it is winter.

We strolled along the coire up to the snow section at the head. We elected to track up to reach the main ridge to aim for the two lochans. There was no sign of a path due to the snow. Our route was bit steep at one section and tricky as the snow was hard and not easy to cut in. I forgot to put on the yaktrax pro ice walkers, even Andy had managed to buy a pair. We joined the ridge at the two lochans which were covered in thick ice. Shame there was no shiny stones around for curling. Andy arrived looking the worse for wear at this point so decided to have a rest and load up on calories. Continued up following the obvious paths over the ridge to arrive at the SE summit cairn. Decided it was time to put on the ice grippers for confidence. Another wee climb to reach the trig point cairn (1248) then checked map to confirm that the real summit was a wee bit further on. Five minutes later it was there. Retraced route in poor visibility shouting out for Andy…At the SE summit I was beginning to get concerned. Then out of the mist he was there. A bit of encouragement and a slice of millionaire shortbread and we were back over the tops to the true summit take two. (1348) Two other lads appeared and asked us if this was the real top. Must have thought we were a couple of numpties up there with no rucksacks. We had left them at the east top.
Anyway time for the return leg. This is where the first critical fault with the yaktrax ice grippers became evident. One of the thin rubber straps just snapped. Pants. I guess they are not suitable for 13 stone traversing movements, too much lateral load. Still four outings before partial destruction, works out about £2.50 per shot. Not sure I should claim a new pair from e bay… Still I did buy the micro spikes at Tiso for £27.77 which might get a shot next time.
We continued and out of the blue or white a little ptarmigan appeared with winter plumage. Nice one. Not the best picture. ptarmigan in there somewhere

As I waited in the corrie I noticed another climber ascending via a snow covered gorge..and it was late in the day…I was in two minds what one to watch as Andy was struggling over a white section and the other guy… Andy appeared and said he had lost his new ice gripper and I could have the other one..Result. Nah..I went back up to the snow section and managed to find it. Off we went leaving the guy working his way upwards into the clouds.
On the way down we took the path which aimed direct for the bridge. This was very stony and punishing on the joints.
Still we got back down safely and I decided to cool the feet in the fast flowing water under the bridge. Felt something tickling my feet, thought it was ferns, or other plants..Nope it was ice. Still it took the heat out of the sore toe. We walked back along the loch side and spotted a wee dipper in the water, Photo was too dark to show. We also spied plenty of deer including a pair of hinds who seemed to be joined together at the hind, and three big stags who watched over us as we headed out. We had another glimpse of the goats and then it was back to the car at 1730 safe and sound and delighted to be able to enjoy a day like this. One hour later it was pitch black, just hope that the two other walkers got back down safely. Back in the house bathed and fed for 1900. Result.

Those goats made us laugh when we met them up there. Did you smell them? I've heard others say you smell them before you see them but think I must have been so wiffy myself I didn't notice!

Love your pic of the conjoined hinds!

dogplodder wrote:Those goats made us laugh when we met them up there. Did you smell them? I've heard others say you smell them before you see them but think I must have been so wiffy myself I didn't notice!

Love your pic of the conjoined hinds!

I have very good memories of this area, thanks for bringing them back!