On the way up to Arran a couple of Octobers ago, Richard and I decided to stop in Dumfries & Galloway as we’d decided to do Merrick as a warm-up.

The morning was extremely frosty and I found driving up the minor road of Glen Trool got increasingly scary, especially the final uphill to the carpark near Bruce’s Stone where we booted up and skated across the carpark to the start of the path. Luckily walking on the path was fine and after about half a mile it headed pleasantly through the forest to Culsharg Bothy where we had a quick break in the sunshine sat outside the pleasant cottage.

From there the path climbs steeply up alongside the burn, out of the forest, and then at the top of the corrie, turns north-east and follows a wall to the summit of Benyellary. At this point the extensive views open out along the ridge to Merrick – a good track along a gentle ridge with views either side – just my sort of thing! The climb up to Merrick was exceedingly easy... While we lingered at the summit cairn I looked at the onward view to Kirriereoch Hill and further hills beyond and admitted to being tempted to continue. Richard however had no interest – he’d done the highest hill in Dumfries & Galloway and was going back. I had a peep over the edge of the escarpment down the steep narrow ridge of ‘Little Spear’. It was thoroughly iced up and looked tricky. Just at that moment, we heard an approaching engine. It was a quad bike with not one, but 4! Shepherds sat on it, one even in front of the handlebars. They shot off over the edge without any hesitation and disappeared down said icy narrow ridge. We were both totally gobsmacked.

I watched them get safely down to the col where they dismounted and proceeded to clamber about after sheep on the steep, loose, rocky slopes above ‘Howe of the Cauldron’. One of them even started a rock avalanche. By now I had picked my way down the steep ice to the same col and continued past them. As I looked back, I noticed Richard was still watching my progress.

There was a short col and then an easy, steady, short climb up to Kirriereoch. I noticed at the summit that Richard had by now left Merrick. I looked all around at the extensive mountain landscape and wondered how much more I could get away with doing bearing in mind I didn’t have many hours before it dropped dark and quite a long walk back. I descended towards Mulwharchar and really wanted to go up it and back over the ‘Range of the Awful Hand’. 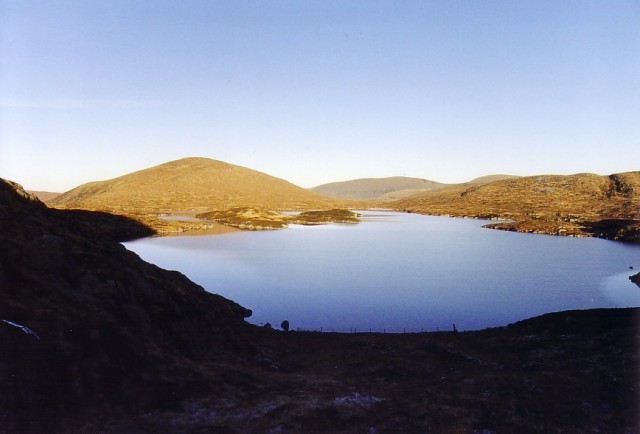 This involved a very rough, and no doubt pathless, crossing of Dungeon Hill/Craignairy, Craig Neldricken and Buchan Hill back to the carpark. After a bit of agonising, I sadly decided I really didn’t have the time left so just headed for the very lovely Loch Enoch. 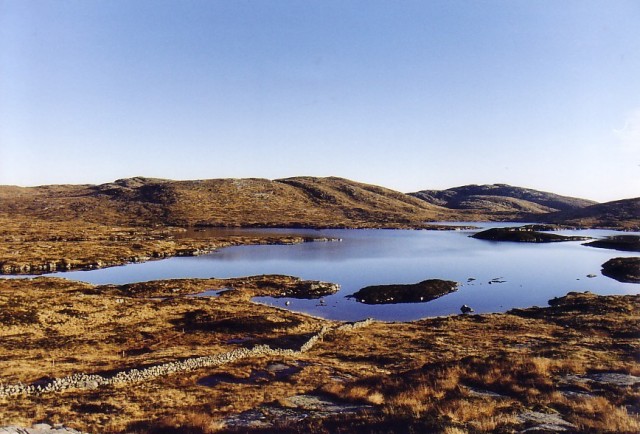 From there I just followed the burn down the defile between the hills, at one point scaring a herd of red deer hinds into jumping the wire fence – one getting caught up briefly and making me feel guilty. Then the path left the burn to go into the forest. The forest was misty with an air-frost and the grass completely white and crunchy with the freezing dampness. I soon ended up walking beside the burn again after it’s confluence with another one. The path eventually ascends the hillside again to come out on the original route above Culsharg but I decided I’d best stay on the river bank as it was shorter and it was getting pretty dark.

By the time I got back to the car, Richard was pretty ratty as he was by now frozen – he was sat inside the car but it was extremely frozen up. I said I’d been as quick as I could. I told him he was allowed to start the engine though even if he doesn’t drive!

In the evening, we were staying at a nice little place called St. John’s Town of Dalrigh. It had lovely quiet country lanes and after the evening meal I went on my usual late-night walk around them.

I’d walked a couple of miles and found a nice connecting lane past a loch and through some woodland. I was walking through the woodland in complete darkness, when, on passing some bushes, I heard a long, low growling/snarling sound. At first I thought I must be imagining things but no, there it was again... It most definitely wasn’t a dog, and to my mind sounded more like a ‘big cat’. I know there are supposedly quite a few big cat sightings in England and Scotland and have to admit to being pretty worried. I looked around and found a nice big piece of log, and decided the only thing I could do if it pounced was to wedge that between its jaws and hope that sufficed. I kept looking round as I walked, to see if there were any large, dark shapes following me but could see nothing. I was sure that at any moment, two huge paws would thud into my back, I’d be floored and eaten alive. It was the only time I’ve ever questioned my late-night forays into the countryside but I was questioning it now.

I made it back to the pub where I must have looked a bit shaken as my parents, who also happened to be staying in the same village and had dined with us, asked me what was wrong. I told them about my ‘encounter’. My Dad decided to quiz the barmaid and she promptly agreed it would be a big cat, thought there were some in the area, and promptly told all the locals. She also arranged a taxi home – she normally walked!

The next day, I decided to go back to look in the bushes to see if there was any sign of anything. When I got to the place, Richard wouldn’t get out of the car – he wasn’t worried, he just couldn’t be bothered, so I got out and went back to the bush. I was astounded to hear the snarling noise again! I couldn’t believe it – it surely shouldn’t still be there? Periodically hearing the growling I went into the woods to investigate as I couldn’t see anything in the bush. The noise was then coming from behind me but I still couldn’t see anything. I then saw a nice roe deer in a nearby field and decided to watch that for a bit and ignore the growling, but I did notice the growling noise seemed to coincide with times when the breeze got up a bit.

Then, all was revealed… there was a gust of breeze (if you can have such a thing), a long growling noise… followed by a high-pitched creak/squeak… the bloody noise was a tree creaking! It honestly didn’t sound anything like that, it distinctly sounded like a growl! How embarrassing – and now the population of Dalrigh are living in mortal fear of a growling tree!;-) I had the mickey taken out of me the rest of the holiday too. Re: Merrick, Loony Shepherds & The Big Cat of Dalrigh!

Lovely report MC. I've not done much in the Borders but you reminded me of our jaunt up Merrick. We carried camping gear and set up camp afterwards at a little sandy beach on the east side of Loch Enoch. It was a hot september day and we both went out and swam in the loch. It was idyllic, until suddenly - despite this being the Borders and September which I'd thought made us reasonably safe - we were attacked by more midges than I'd ever seen before or since. We legged it to the tent and zipped up, then spent ages squashing all the ones that came in. Millions of midges were quite literally hammering on the door for hours, making a noise like I'd never heard.

The sandy beach felt like concrete in the night as well

Re: Merrick, Loony Shepherds & The Big Cat of Dalrigh!

I'd have hoped that by September the midgies were thinking of dying off... I was hoping to maybe stay at A' Chuil bothy this September for a week or so. I suppose there's more chance of avoiding them in a bothy than a tent but you still have to get your bum bit in the night!