First of the year

First of the year


First hill of the year, and first ever walk report.

The pic's don't really do justice to the incredible views from the summit of Carn a'Chlamain.

A quick rendevous in Perth and it was on to the car park at Old Bridge of Tilt. The four of us were on our bikes and on our way for 9.30am. Rather than follow the Walk Highlands route, or take the path from Forest Lodge we ended up leaving our bikes around half way between the two (Chlacghlas I think). It was then a direct ascent up heather and snow patches before eventually meeting the landrover track. By this point the views west were opening up with Schiehallion and the Glen Lyon munros prominent, and Beinn a'Ghlo looking massive to the South.

From there it was a straightforward and gradual walk to the summit with no difficulty on the way. The sun started to split the sky as we completed the last 15mins or so of ascent. From the top the views were even better - particularly to the west. It was bitterly cold on the summit so a few quick snaps and we returned by the route of ascent, back on to the bikes, and headed back down Glen Tilt to the cars.

A fantastic opening walk of the year. On the summit cairn with Beinn a'Ghlo behind 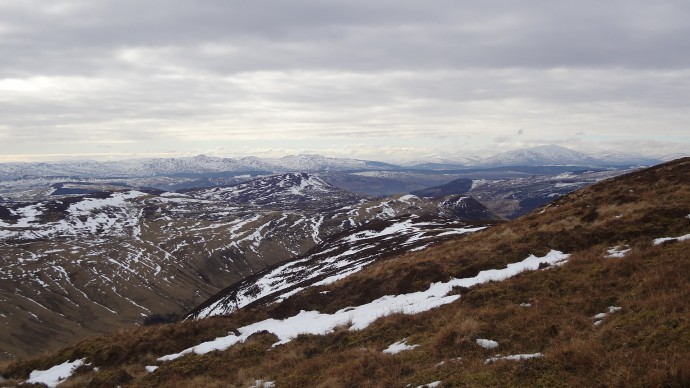 Glen Lyon munros and Schiehallion in the distance