Started the walk at 8:45 am having got 4 hours of sleep and had a curry the night before...so my friend and I were rather intrigued to see how the rest of the day would pan out. We parked up at Balsporran and started our way up the track. Along gaining about 30m elevation on this track we took another track (2nd one since starting) that went off to the right. This is not marked on the OS but is on the aerial satellite provided for free along with OS maps by Bing maps. We decided to follow this as it spiraled up Geal-charns slopes on the left hand side of Allt Beul an Sporain. Grouse and white hares were abundant here. We continued to follow this path up until it was lost under the still solid snow pack. We persisted up to the shoulder at 830-840m. MWIS had forecasted 20% cloud free Munros and flurries. Up until now we had believed it, until the clouds lowered and parted and we were left with a very nice inversion. The clouds continued to lift and we were left with very pleasant conditions, albeit cold. We summited Geal-Charn at about 10am, visiting both cairns. The view over Loch Ericht and Ben Alder was amazing.

Descending from Geal-Charn, the fog returned and we were left with about 20m visibility, our hair froze in the cold as well, which was rather amusing. When we got to the bealach at 739m, we went up the ridge to the left of coire Fhar where we had to attach our crampons and use our axes. The snow pack was now thick as we pressed on to the ridge. Once on the ridge, it is very flat and straight forward walk to the summit of A'Mharconaich, which is crowned with a modest cairn. We didn't stay long as the wind had increased, adding to the already freezing temperatures. We retraced our steps back along the ridge in a westerly direction to the next munro, Beinn Udlamain.

We came down the ridge to the bealach at 861m before heading up the massif of Beinn Udlamain. This broad, featureless mountain was completely white with thick snow. We followed the fence up the ridge to a plateau that starts at around 970m. From here we headed in a SW direction towards the large cairn at the summit. The mountain is very broad, so views of Loch Ericht were hidden from view at the summit, but the surrounding ranges of Ben Alder, Aonach Beag, Schiehallion, Cairngorm, Ben Macdui, Crianlarich hills, etc were all amazingly clear. We then started down Beinn Udlamain towards our final Munro; Sgairneach Mhor

We descended S, SW, from the summit to the bealach, admiring the extended views and the amazing view along Loch Ericht. We stopped for 30 mins for lunch near Carn 'lc Loumhaidh, at around 809m. Here, we saw skiers coming down off Sgairneach Mhor, which looked like a lot of fun. It was very warm in the sun and we could have stayed here out of the wind for ages, but we decided to press on, leaving at about 14:30. Going up Sgairneach Mor was great, not as steep as the other hills, and with the panoramas always around you, we were amazed to find ourselves on top of the ridge at 930m. We took great care in staying away from the coire as we circled toward the trig point, barely peaking out above the snow. Here we stayed and took in the views. We decided to head down at about 15:30. We had considered the Sow, but our thoughts were on the fire in Balsporran, still quite a distance away. From A'Mharconaich, we saw some nasty cornices on Sgairneach Mor, particularly around Coire Creagach, where we had spotted 4 or 5 fresh small avalanches coming from the summit. As we took our time on this steep ridge we looked out over the Sow, slightly ruing our decision to jack it in.

5. Coire Dhomain and the long and winding road.

We descended toward the bealach and knoll at 758. We contoured around this knoll at about 730m befored making a bee-line to the bridge north of the sow. There are two bridges that cross Allt Coire Dhomain, both of which are not marked on the OS. They look very new, and are situated at roughly NN 607748 (due NNE of Sgairneach Mor, below Core Dhomains "m"), again Bing's Aerial map feature shows this clearly. We crossed the other bridge due NNW of the Sow at NN 619751. We then followed this path towards the A9, crossing underneath the railway line and up the other side to the path alongside the road. It was just a matter of following this roadside path for about 2 miles back to Balsporran, where we arrived at around 18:00. 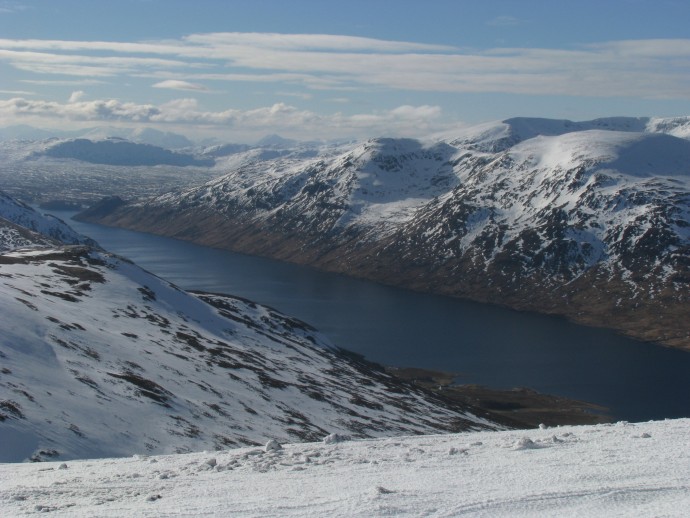 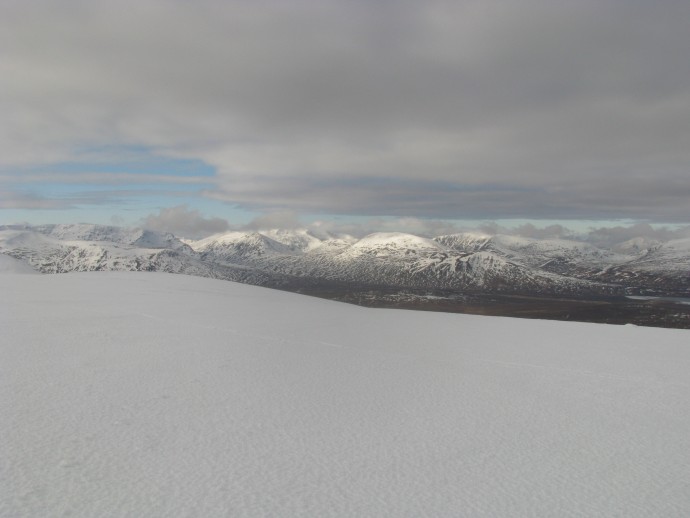 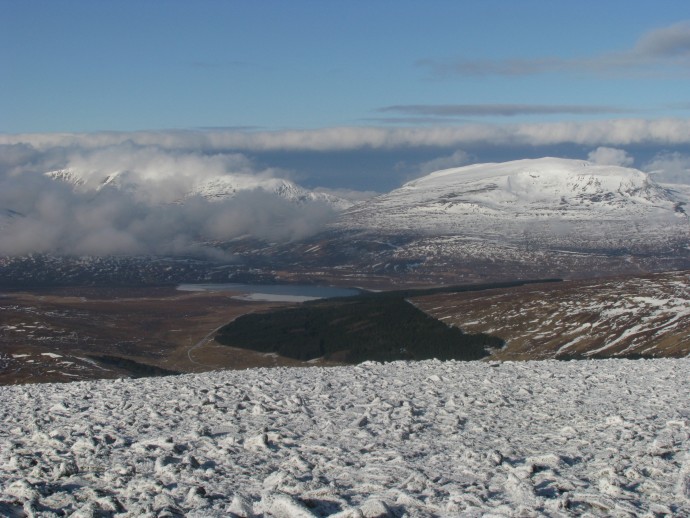 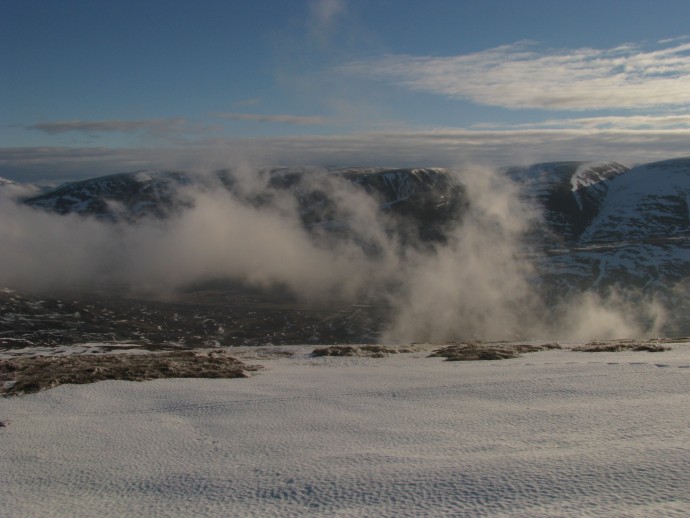 Pretty sure myself and my girlfriend passed you guys sitting at the bealach on the last munro, we were heading up just as the skiers were coming down to the bottom of the slope. Was a great walk in almost perfect conditions!

Nice report! Many thanks for the detail about the new bridges - I've a had a couple of "interesting" crossings there in the past (though I think you may have your grid references back to front

jmarkb wrote:(though I think you may have your grid references back to front