Saturday dawned cloudy in Aberdeen, but the MWIS Cairngorms forecast suggested something a little brighter over to the NW side of the Cairngorms, albeit with "large sheets of cloud" drifting about between 600 and 800m in some areas.

Having left Aberdeen shortly after 8.30am, we made unusually good progress along the A96 to Huntly, and the road across to Dufftown and then the A95 were better than usual too. Arriving at Glenmore visitor centre just after 10.30, Meall a' Bhuachaille was free of cloud, being an outlier to the Cairngorm plateau which had cloud covering the tops of the corries. The skies were generally overcast with just a hint of brighness and the odd snow flurry.


our_route.gpx Open full screen  NB: Walkhighlands is not responsible for the accuracy of gpx files in users posts
Having paid the reasonable £2 parking charge and made use of the facilities, we set off up the path from the visitor centre, immediately seeing a red squirrel on a bird feeder. He/she wasn't remotely bothered by us being there, posing for several photos whilst nibbling away happily. The very first part of the track had very recently been used for forestry clearance, so there was a brief section of clambering over branches. Soon this improved and the track ahead was an easy stroll. This came to an abrupt end in the middle of the forest, but a clear, much rougher path led downhill from here to An Lochan Uaine, a light dusting of overnight snow colouring the ground.

We'd been looking forward to seeing the infamous green colour of the loch, forgetting that of course it would be frozen solid from the cold weather! In fact, the ice was so thick that you could probably walk across it, although we didn't risk it. Go on, scold me for wearing jeans

Even the largest rocks we could find couldn't break the ice. A dog was enjoying the luxury of the loch all to itself, to the consternation of the family trying to coax it back to shore. After the family left we had the loch to ourselves for a while, before continuing up the track. The green hue has to be imagined today

The track up to Ryvoan Bothy was covered in clear ice, making for an interesting few minutes. We had a look inside the bothy, which looked in good condition. The fireplace was still warm so it must have been in use overnight. A past visitor must have been a fan of British Rail going by the nature of some of the wall adornments.

From the bothy a clear path leads steadily uphill to the left, ascending the eastern flank of Meall a' Bhuachaille. The ski resort webcams had shown the ridge to be pretty much free of consolidated snow, making for generally easy walking. The small remaining patches were rock hard and very slippery - you could jump on them without even leaving a footprint.

The view at the top was excellent, although still overcast, and showed a frozen Loch Morlich as well asa sweeping view of the plateau. The air was clear enough to just about make out individual skiers in the Ciste Gulley at Cairngorm ski centre. Unfortunately the top of the mountain was in the cloud for most of the day, which can't have been ideal for the freestyle event which was planned that day at the top of the slopes. Glenmore from the summit

The path remained very clear on the descent to the bealach at 624m, although care had to be taken to distinguish grippy new snow from the occasional patch of older stuff. 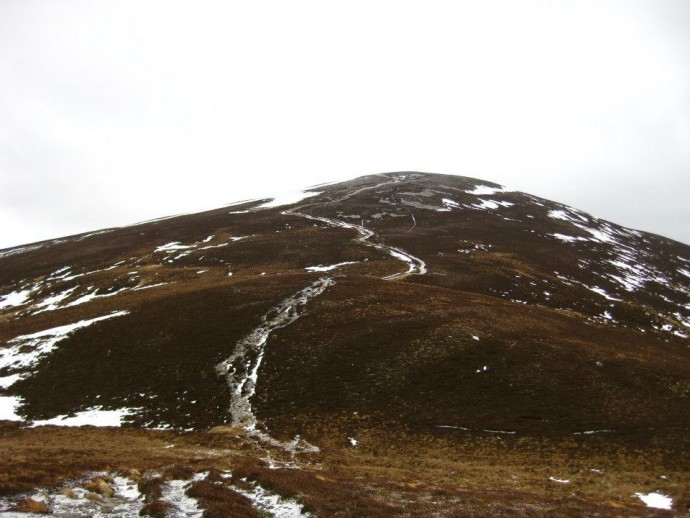 Looking back to Meall a' Bhuachaille from the bealach

If anything, the view was slightly better from the second summit of Creagan Gorm, as the clouds parted slightly and gave us the odd ray of sunshine. The view back along the ridge improved as we continued west, looking like a miniature Beinn a' Ghlo. It took a little longer than expected to reach the end of the ridge at Craiggowrie. The path down back to the plantation would have been a little unpleasant in warmer or wetter weather, but the ground was thankfully frozen solid today (-5C at Munro level). Once in the forest, the surface improved again. The long tracks back to the visitor centre made for quick progress and afforded some more decent views towards the Cairngorms, especially where the trees had been felled. Overall a straightforward but very rewarding walk with fantastic views - although would have been better on a brighter day. However, no rain, low cloud or wind today, which is about the best you should aim for in Scotland unless you only want to go walking once a month...

Re: Meall a' Bhuachaille, Glenmore

It's a great viewpoint this Hill and you got some good photos. I like the one of the squirrel. I hope those jeans are waterproof