40 people think this report is great. Register or Login free to be able to rate and comment on reports (as well as access 1:25000 mapping).

With the weather conditions continuing to be fantastic I decided to head out for the second week in a row!
Another Corbett would be excellent, however on examining the forecast, there was a high uncertainty regards cloud layers and it seemed the further North would be more likely to have less cloud. So I initially decided on a Corbett round in Ardgour. However later in the day the forecast changed – the layer of cloud may extend further north !!! hmmmmmm . What clinched the route change though was that it was now mentioning that the cloud would be a layer between 700m and 1000m! So a high likely hood that a Corbett’s summit would be misty!! Decision made – The Ben –might even get an inversion

I had done the CMD Arete back in 2006 on route back from a May trip up Castle ridge (made memorable by great weather ooh and me losing my cars keys somewhere up there!!). I was keen to try it under a covering of snow and a Winter trip had been on my tick list for some time.

Last week I went up Creise and Beinn Mhic Mor in what was perfect conditions and I questioned whether this was one of my finest days in the hills, perhaps even better than my trip to Torridon! Well today went one better and this trip was at least on a par with my Torridon Traverse!

Up at 04.00am and away by 04.30, I arrived at the North Face car park around 06.40. It was relatively busy – not unusual as the climbing conditions were perfect (a little jealous!). Climbing today would have been great and I did ponder heading up No.4 gully, but I don’t think it would have given me the same panoramas as the Arete

. Due to this itch I had also decided to head up toward the CIC hut then pick a steep gully/runnel to climb up and at least get some use of both axes (I had packed the Grivel Axes as opposed to my walking axe for this reason, I was unsure as to how steep exactly it would be).

Anyway I set off around 07.00am after some faffing at the car and headed up through the forest, the views back down towards Fort Bill were great. A thick layer of fog was sitting in the Glen and I was soon above it starting to see an Alpen Glow on the mountains in Ardgour. 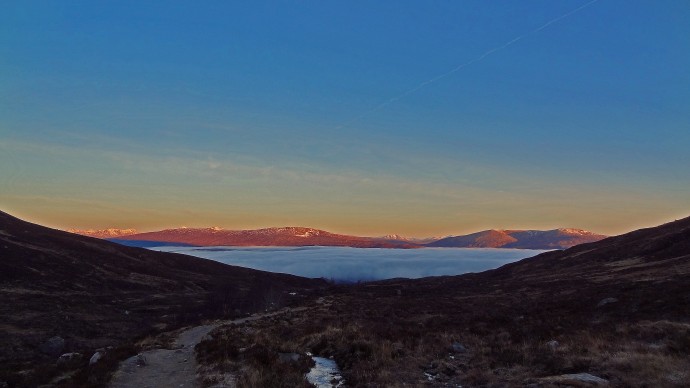 Ahead of me The Ben was crystal clear and looking majestically white with a stunning blue background. 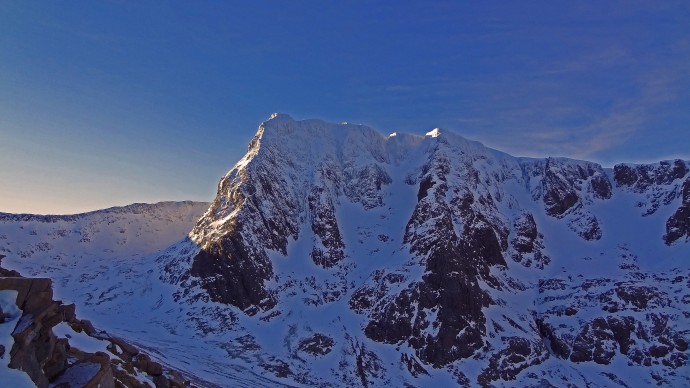 http://www.flickr.com/photos/scotlandsmountains/8595753678/
The nearer to the CIC Hut I got – the more climbing parties I could pick up – most seemed to be heading around the Douglas boulder and into the Tower Gully area. I decided at this point to strike diagonally uphill to try and find a suitable runnel to ascend. I found one which was unbroken all the way from top to bottom (top 2/3 of mountain plastered in snow anyway). The snow was solid, fantastic neve. I stuck on the crampons and got the axes out and headed up. Initially it was not too steep and one axes was enough but it eventually steepened the higher I got and some front pointing was required.

getting steeper up runnel


http://www.flickr.com/photos/scotlandsmountains/8594653623/
This was hard work and my calves were burning- out of practise me thinks!!:) Anyway – this was a good excuse for lots of mini breaks, and lots of taking in the view across to the North Face!

fantastic views to the North Face of The Ben :)

http://www.flickr.com/photos/scotlandsmountains/8595752038/
The runnel popped me onto the ridge between Carn Dearg Meadhonach and Cran Mor Dearg, and it was a couple of minutes to reach the Munro. Can’t really explain how good the views were and the video and photos don’t do it justice. This was one of the clearest days I have had on the hill, the visibility was superb in all directions. You could easily see from one side of the country to the other!

Panoramic view bac across The Ben and CMD Arete

http://www.flickr.com/photos/scotlandsmountains/8594655793/
At the summit the views were soaked up, but soon the sweeping Arete below me took my full attention, it was covered in snow and I was soon pulled onto it and off tramping along the summit crest. The going was easier than my previous visit due to the snow cover. However the arête does fall away rather steeply on both sides so you do have to remain alert when cross some of the boulder steps (very hard when your eyes are constantly being averted from your feet to take in the views!!). After a memorable traverse I reached the new Cairn at the top of Coire Leis and had some food. I looked around and could see no one. I had met one couple who were heading for Ledge route and returning via the CMD arête but apart from that I had not spoken to anyone. Here was no one on the CMD Arete or on Carn Mor Dearg- had the whole place to myself! I reckoned this would change when I reach the top of the Ben however!! 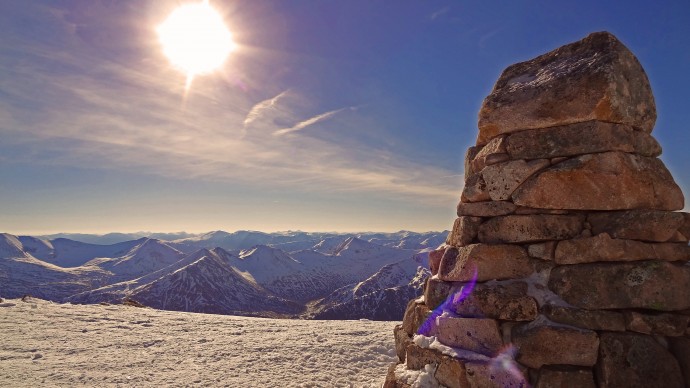 back across coire leis to CMD

http://www.flickr.com/photos/scotlandsmountains/8595759654/
One final steep pull up and I found myself on the summit of Britain with only two other people – the same couple I had met on the walk in – they had experienced a cracking trip up Ledge route

When they left, the summit was empty. Strange on such an awesome day – it was now midday.

Summit with only two oher people I met on my round!

http://www.flickr.com/photos/scotlandsmountains/8594659829/
I descend back down the Zig zags to the half way lochan then back to the car (down to T shirt by this time!!). The mountain was empty – even the Zig zags were quiet!
I got back to the car for 13.30.
Described as a classic mountaineering route in many of the books and also as possible the finest walk (and ridge walk) in the UK, I had caught this in perfect conditions. Could this be the finest walk in Britain- fine views, an airy ridge walk some easy scrambling? Seems to have it all!
Once again - too many good pictures to fit in here so I have put them on thi link if you bvare interested :
http://wilkiemurray.weebly.com/some-pictures.html

Wow, words fail me! amazing day, thank's for posting. It probably was made more special being on your own!

Just one question, do you not find that making the film for WH members and others to enjoy, detracts from your own enjoyment?

The Rodmiester wrote:Wow, words fail me! amazing day, thank's for posting. It probably was made more special being on your own!

Seemed a little eery being ontop with only two people the descending there were none as the oter two wereheading bac via the CMD Arete.

Just one question, do you not find that making the film for WH members and others to enjoy, detracts from your own enjoyment?

Good question and one that gets asked a lot i.e. dont you get fed up leaving the camera and heading back to hit etc etc ie walking twice as far!

In short - the answer is sometimes yes!! However on days like I got for the CMD I wanted to spend as long as possible up their (although I did have a time schedule!!). Mostly I dont mind and I get a great deal of enjoyment editing and almost reliving the walk for days afterwards (once again not all the time - sometimes get fed up!!). I hope you njoy them

i for one am really glad you enjoy making these films ..theyre just getting better and better

This is one of those reports when I can't find any words that are good enough to truly describe the photos - 'stunning' and 'awesome' and 'sublime' seem a bit tame!

i for one am really glad you enjoy making these films ..theyre just getting better and better

Thanks Savage Alice much appreciated

the Oscars not alba - setting my standards high! Haha

smike wrote:This is one of those reports when I can't find any words that are good enough to truly describe the photos - 'stunning' and 'awesome' and 'sublime' seem a bit tame!

Thanks smike - I think the visibility and clarity was some. Of the best I have experienced

Caledonia you're calling me

. I'll not be doing it snow but if I get half as nice a day on the CMD Arete I'll be delighted..............this TR is nothing short of spectacular though

Sheer class...feel I should be paying some sort of royalties after watching the video.
If you can pick days like that on the hills I'll leave you my number, more reliable than MWIS.

What is there to say but: Woooooheeee!!

I need to expand the range of adjectives at my disposal because stunning, amazing, awesome and excellent don't quite cut it!

Top
40 people think this report is great. Register or Login free to be able to rate and comment on reports (as well as access 1:25000 mapping).