I started the day off with grand dreams of possibly squeezing 3 corbetts in on my day trip to Arran, but i ended up with only 1 and doing more miles than i thought possible on a small island.
The day started off badly for me when i began to fill my water bottle at the sink it p!ssed out from a newly formed hole in the bottom, not a major disaster i hear you say, but when you`re used to sipping from a drinking tube any time you like, then it`s a major pain in the ass to be fumbling around in rucksack pockets looking like quazimodo every time you want a drink.

I had to get a bus, train, ferry and another bus before i began walking and i was buzzing for it by the time i was dropped off at the car park at north glen sannox. The big breakfast on the ferry had filled me with plenty of energy. 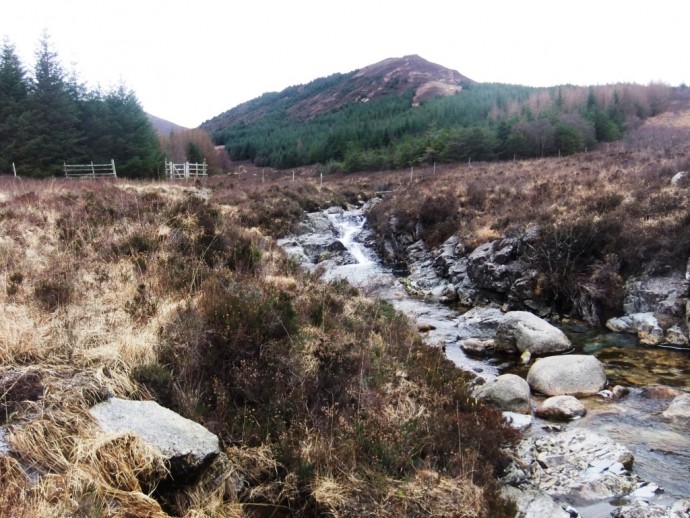 Although it wasn`t the perfect day it was warm enough and overcast with cloud but that didn`t spoil the walk up the glen following the North Sannox burn, which was running in the opposite direction. Water cascaded off the rocks and swirled into little whirlpools along the edges. There was a few bonny waterfalls too along the way and one which dropped into a huge pool, ideal for a skinny dip in the summer, only problem seemed to be how to get down to it.

The forest on either side of the burn was nice too and was filled with cheeps and shrills of the various birds in them. As i passed this bit i looked up to see two buzzards circling around above me and tried to get a picture of them but all my shots just showed little blots in the sky.

I walked on up, gradually gaining height getting closer to the first target hill Caisteal Abhail. 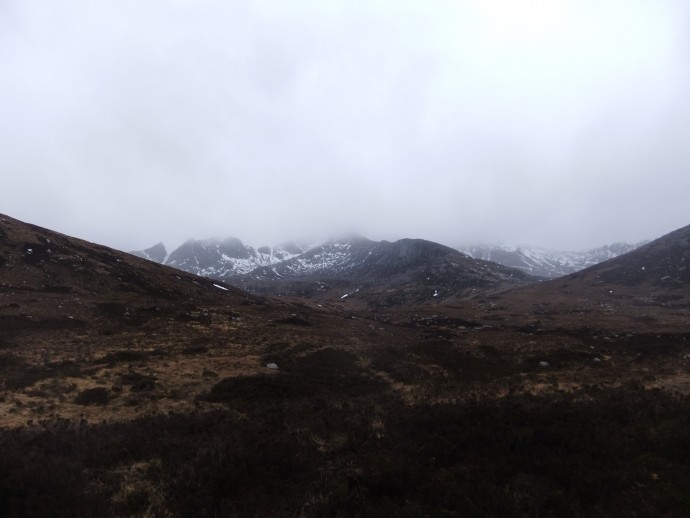 On the ferry i read a great story about how Arran`s hills were formed. It involved a great battle between a giant and a serpent. Caisteal Abhail is said to be were the giant now lies. With cloud pouring over the tops of the hills it was beginning to look a bit more mean and moody compared to the nice walk up the glen, it was looking other wordly with the snow filled gaps and cornices set against the black rock of the jagged granite peaks. I took a slight deviation from the walkhighlands route and started up the hill hoping not to wake the sleeping warrior. This seemed a good way to go as i was able to walk across huge almost flat granite boulders that sloped up the hill, keeping me off the the spongy grass. On the way up i startled a bird in the heather, which more than startled me (sh!t myself), which i thought was a ptarmigan, but have since read that there are none on Arran ? I made my way onto the ridge and by some huge granite tors on the way. The clouds were rolling in from the sea and looked like they would for a while. ascent to summit with beinn tarsuinn behind

As the north east side had a snow cornice all the way up i kept away from the edge and zigzagged my way up till i reached the castles on top, more huge granite tors, one of which held the true summit. I dallied about a bit before going up to the top as there was a snowy slope to cross and some rocks to explore. I was also waiting for the clouds to clear and after about fifteen minutes or so and after a munch i decided to climb up to the top, the final climb does involve a bit of hands and knees action onto the summit tor.

Once on top, with the cloud and wind it was obviously too dangerous too attempt to go over and do Cir Mhor and Goatfell myself as there seemed to be a fair bit of scrammbling up and down it`s jaggy paek. I then headed back down the immediate north slope, which was quite steep with large snow patches in between the rocks, which i practiced using my ice axe on as well as the obligatory bum slides. I did come across one icy section, which i thought, put crampons on, which would have taken me ten minutes to put on and take off again or one leap of faith across it into a narrow gap in the rocks which would be over in a second, dead or alive

I jumped and wedged myself in the gap then clambered over the boulders down into more snow. 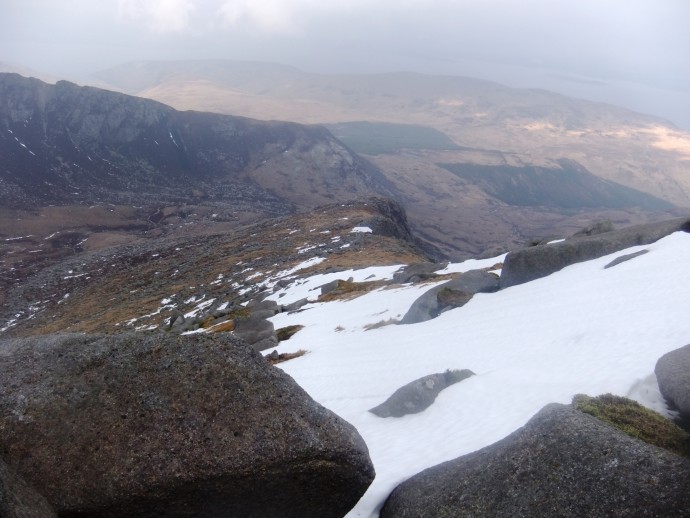 Eventually the rocks disappear and it`s your usual soggy mountain descent.When i reached the burn at the bottom i got that familiar feeling on my back at the bottom of a hill, the sun ! I looked behind me to see it blazing in the sky with a blue background for the first time all day, typical. But I just laughed and stopped for a bit to cool myself down with the icy mountain water and pondered on what had been a good day on the hill. So from here it was just a case of walking down the glen back to the road and catching the bus back to Brodick, or so i thought ! When i reached the road I started walking towards Sannox hoping that the bus wouldn`t come till i got there and I`d get the chance to take some pics of the seals i saw basking on the rocks when i`d earlier passed on the bus. Anyway i walked and I walked and I walked....and kept walking. I should really have hitched but the next ferry wasn`t until 7.20pm and i thought it was good practice for any long distance walks i would do later in the year, not in these boots i won`t, great for mountains but not for roads. By the time i reached the ferry my feet were in bits and my ankles were loupin ! Anyway i got a couple of pictures of the seals, saw some rooks chase a buzzard through the trees and might possibly have seen an otter spinning about in the sea, as well as various seabirds, saw i suppose it was worth it ! Well done Tommy looks like you had a good day
excellent report there,thanks for sharing

Thanks Alan, if you`ve never been you should go, it`s a great day out or weekend even

Cracking pictures Tommy,looks like you had a great day.

A super report - takes me back a bit! Used to live in Ayrshire and would regularly go across to Arran to walk (and drink!!!). Brilliant island - Scotland in miniature! My daughter is named Corrie after the wee village down the road from Glen Sannox - and funnily enough is reading Geology at Glasgow Uni!!!
Love your photos too

Saw the title of this one and initially expected it to be about Beinn Vuirich! But a pleasant surprise to see an Arran report instead. I have never been but am heading there in May for a couple of days for a family double 70th birthday celebration. Not sure I'll manage to squeeze any hills into the busy and tight schedule.......

Hill-loving lady wrote:A super report - takes me back a bit! Used to live in Ayrshire and would regularly go across to Arran to walk (and drink!!!). Brilliant island - Scotland in miniature! My daughter is named Corrie after the wee village down the road from Glen Sannox - and funnily enough is reading Geology at Glasgow Uni!!!
Love your photos too

Thanks, that`s a lovely name to give your daughter, but i bet my boys are glad they were all born before i took up hillwalking !

Graeme D wrote:Saw the title of this one and initially expected it to be about Beinn Vuirich! But a pleasant surprise to see an Arran report instead. I have never been but am heading there in May for a couple of days for a family double 70th birthday celebration. Not sure I'll manage to squeeze any hills into the busy and tight schedule.......

Graeme, i`m sure you`ll manage to nip out for a bit, even for a walk up one of the glens, enjoy when you get there

gammy leg walker wrote:Cracking pictures Tommy,looks like you had a great day.

cheers Gammy, i did but the pictures don`t show near enough how nice it is

Brilliant report Tommy, sorry I missed it first time round

The photos are marvellous and love the story about Arran. As for the pools, don't be heading into any of them without your fave paddling buddy

Nice one Tommy, only being there once nice place, was able to get in a small walk to visit kings cave

Tomsie wrote:Nice one Tommy, only being there once nice place, was able to get in a small walk to visit kings cave

Cheers Tomsie, the mountains over there are stunning, maybe we should get a wh meet over there plenty of pubs !

The photos are marvellous and love the story about Arran. As for the pools, don't be heading into any of them without your fave paddling buddy

Lol, thanks, i`m sure there`s a wee lochan near the bothy in torridon !