A tough & undulating classic to start the walking year, on a cloudless February afternoon – I even came out of this with an implausible little flush of sunburn!

coledale.gpx Open full screen  NB: Walkhighlands is not responsible for the accuracy of gpx files in users posts
The popular path out of Braithwaite and straight up the north-east ridge to Grisedale Pike is steep and hard enough going for the first couple of miles – plenty of reasons to pause and admire the open views back to Skiddaw and ahead to the snow-streaked face of Crag Hill. The final ascent rise is a charming clamber up natural rock-steps though, and the rest of the day’s ascent after that comes in more manageable little bursts. Over Hobcarton to the Solway Firth Well-worn paths lead down south to Coledale Hause, but the direct route up Crag Hill from there isn’t obvious, and - with enough icy patches about and one stiff climb already in the legs - I bottled out and headed very gently up via the Grasmoor col to the broad summit plateau instead. The highest point for some way south, this has terrific uninterrupted views into the sunshine and over the Newlands fells to the whiter tops east and south. Back to Grisedale Pike Down Coledale to Keswick & Blencathra On the route east to Sail (looking a much more impressive and distinct hill on the approach than expected) the gentle terrain quickly narrows to quite a sharp and steep ridge down and up, a good path shows the best ways but it’s rocky and interesting going still. The controversial ‘fixed’ path to Scar Crags certainly looks very odd, a zigzagging causeway raised a couple of feet above the natural ground, but time will presumably soften its harsher edges and let it blend in more, and – I’m no fan of some of the steeper descents about – there’s no denying that it’s pretty relaxing to walk. The headland spur of Causey Pike is in enticing view most of the way along the next mile or so of good ridge-walking. Jutting out into the sky with great vistas of Derwent Water, this was the perfect spot for a long rest, to gather the energy for a couple more peaks on the way down. 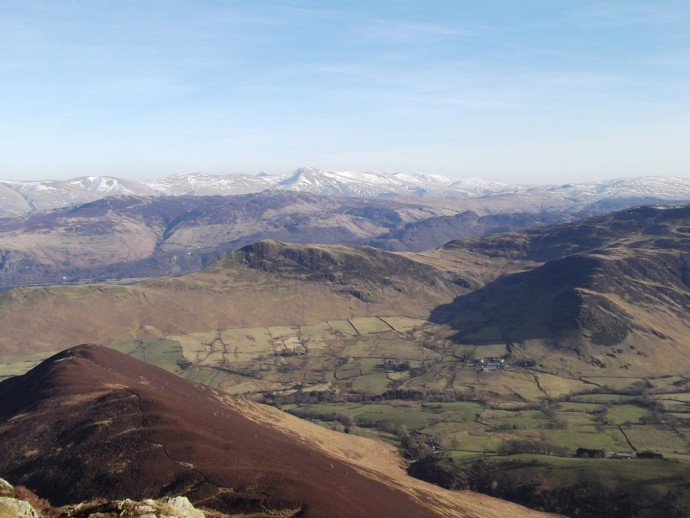 Although not on the map, there’s a clear, often stoned (the other parts probably benefit from a bit of freeze in the ground…) path from the west end of Causey Pike to the dip at High Moss. I had casually thought of Outerside and Barrow as little twins to be tackled on the descent, but from most parts of this route it was clear that Outerside is very much the big brother of the two, towering above its neighbour and Coledale below and with quite an airy and defined peak. The descent north is rough though, knee-jarringly steep on a pretty loose and shifting path – it probably won’t be the last time this year that I feel a guilty pang of affection for that ‘scar’ leading off Sail… Barrow, with gentle grass paths up and down and a friendly accessible nature (busy enough here even late on a February Thursday), is a good end to a testing sort of route. Tired legs at the end, but plenty of good memories… and a fond hope that it won’t be another three months before another decent walking day! Great report of what looked like a stunning day. Great stuff Poppie.

I really enjoyed your report and looked fantastic weather (which we also had in County Durham). I love that walk

Great photos with some wonderful views

poppiesrara wrote: I bottled out and headed very gently up via the Grasmoor col to the broad summit plateau instead.

No shame in doing that, just being sensible

It's reports and photos like this that make me yearn for the hills, which I sadly can't do anymore, but do love reading them so looking forward to your next one

4.5 hours is an impressive time for that round, Poppie. Great views, excellent photos. I was walking on that range a week earlier, but from the Lorton side. Your route included every Wainwright between Whinlatter and Newlands Passes that my walks didn't! Between us we bagged all the Grasmoor - Grisedale Pike - Ard Crags range

Great walk, Poppy. It's been an excellent few days for walking.

Thanks very much, all - it didn't feel very quick as I was painfully trudging the last miles though, Simon!

Back with a cracker here P, and a splash of sunshine too....in February

Wonderful photos of some lovely scenery, looks like my kind of hills....but I'd be taking two trips to get em in