Grey Corries.gpx Open full screen  NB: Walkhighlands is not responsible for the accuracy of gpx files in users posts

The weather report looked perfect, I was expecting cracking views so I brought out the "big" camera and tripod. From the carpark at the end of the track I set off for Stob Ban but not long into the walk I nearly had heart failure as I came across a frozen figure stood by the path Getting closer I realised it was a carved figure called "The Wee Minister".
I carried on along a very good track to reach the bothy at Lairig with Stob Ban in the distance. Views were stunning from the summit of Stob Ban 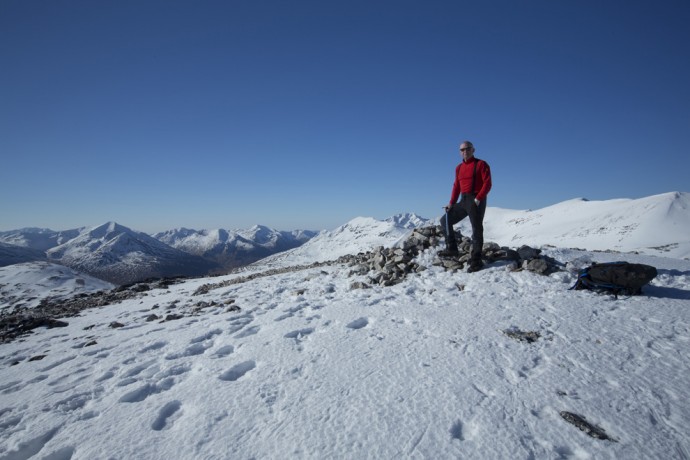 And not so shabby from the summit of Stob Choire Claurigh The wind picked up and gave a significant wind chill so it was time to wrap up.
The ridge route lay ahead and looked perfect with the Ben visible in the centre distance 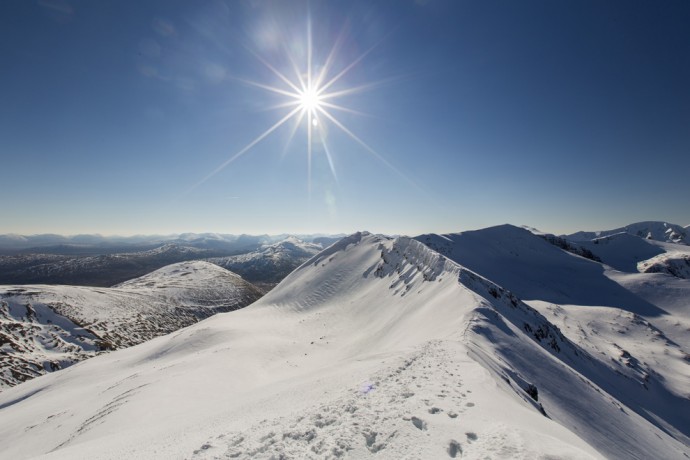 I reached Stob Coire an Laoigh at about 3pm and still felt I had enough in me to tackle Sgurr Choinnich Mor. I realised that I would end up walking back in the dark but the route seemed straight forward enough once I was back at Stob Coire Easain so I decided to go for it I got back to Stob Coire Easain and set off down Beinn na Socaich just as dusk started to settle in, I looked back and could see the only person I'd seen all day just reaching Stob Coire Easain At 5:30 the sun was setting but the route back through the trees following the disused tram lines could be seen, little did I know what lay ahead I eventually reached the dam after spending a considerable number of times falling on my backside because I'd taken my crampons off once I reach turf but it was still frozen and very slippy. Initially panic set in at the dam because it was getting quite dark and I was trying to find a way to cross at the dam then I remembered the guide book mentioning about crossing before the dam. After another few falls on the ice I got across and spotted the style thinking thank god for that it was now just a simple walk back along the tram line

I had the head torch on but the route was anything but pleasant, it was very boggy and frozen so I was either slipping around on ice or falling through into knee deep bog!! It was only 2.5km back to the van but that was the longest and most draining 2.5km I think I've ever walked, it just seemed to go on forever. Eventually I reach the campervan and put the kettle on for a well earned brew and phoned in to say I was Ok at 7pm. I hadn't seen anything of the person I saw earlier but there was another car parked next to mine so I took it to belong to whoever was behind me, but after getting brewed up and changed there was still no sign of the other person and I started worrying that he was ok as it was now 7:45pm and I reckoned he was only about 15 minutes behind me from Stob Coire an Laoigh so I sat in the van with the lights on thinking if he didn't have a head torch he would have something to head for but eventually at 8:25pm I spotted a head torch coming along the track

So a cracking long day it was.

The path parallel to the railway line is far more civilised!
Nice report!

Lucky man, what perfect conditions for doing this

Geat stuff, hoping to do these soon - might bike up to the bothy though.

What an ace report!

How unlucky to get both ice AND bog; how is that even possible?! I guess there's no limit to Scotland's bogginess