our_route.gpx Open full screen  NB: Walkhighlands is not responsible for the accuracy of gpx files in users posts
I chose these fell today because there's still quite a lot of snow on the higher mountains, and because I'd read that these are easier to do when the ground is frozen.I started from Armboth, on the west side of Thirlmere,parking in a lay-by to avoid having to pay for the car park.The first part of the walk is up a steep stony path.There was some ice on it, but not enough to make the walking difficult. From the top of the plantation the path goes up towards High Tove, but I headed off to the left to climb Armboth Fell.There isn't really a path here so I just headed straight to what looked like the top. I'm not sure if this was the actual summit, but since the Wainwright top isn't the real summit, and Wainright himself wrote that it isn't really worth climbing anyway, I'm counting it as done.
I climbed another bit of rock as well, just in case that was it. 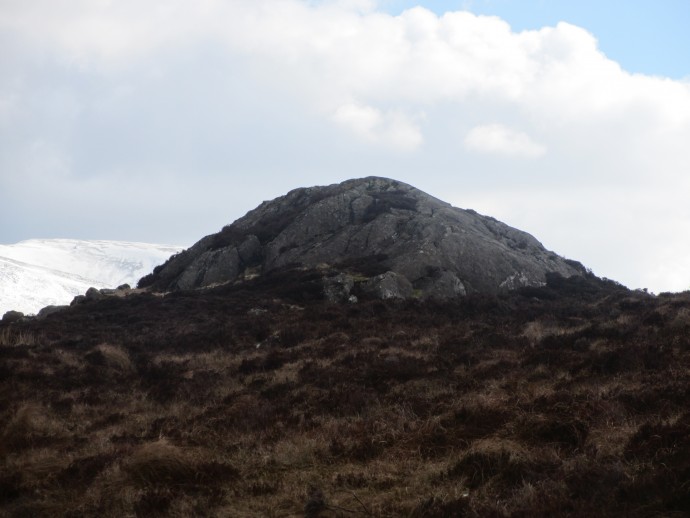 The next hill was High Tove, which at least has a well defined summit,although when you get to the top it's just a little bump on a big plateau. To get to High Seat you follow the fence along the ridge.This would be a very boggy walk if it wasn't frozen,but today it was fairly easy,although parts of it were only half frozen and I could feel the ground starting to give way as I walked over it.High Seat was the highest point of the day at just under 2000 feet.
There was ome snow on the north side of it, but not on the south. 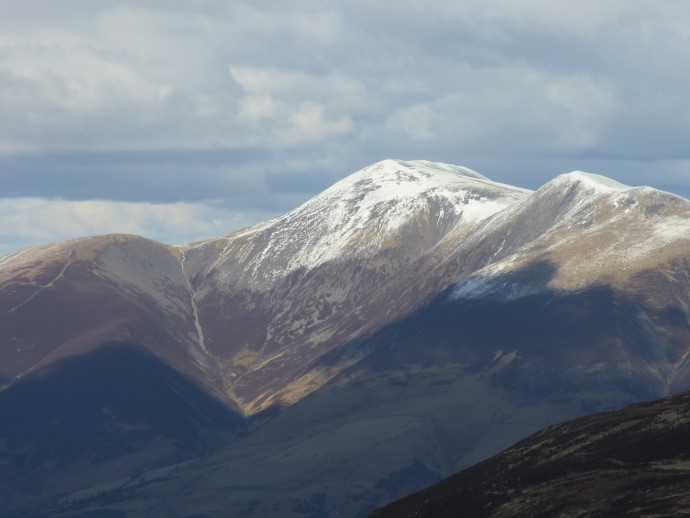 From High Seat it's another walk over the frozen bog to Bleaberry Fell. 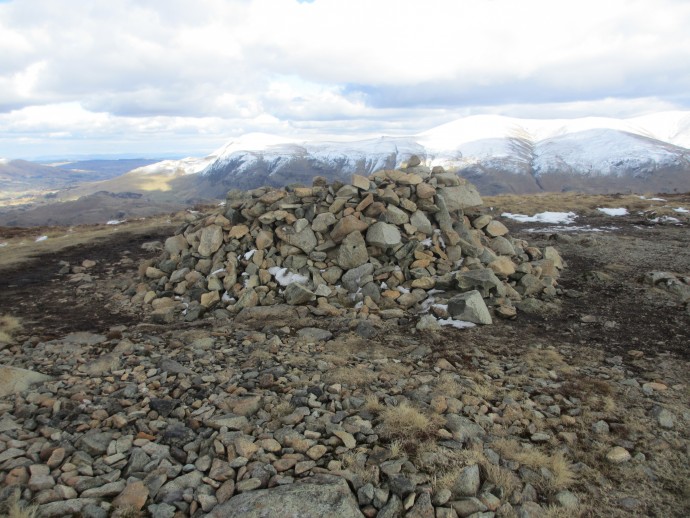 Bleaberry Fell from the NW

From Bleaberry Fell I took the path down to Walla Crag and then down to the A591 near Nest Brow.
From here I had planned to go up Raven Crag, but didn't make it to the summit.I took a path through Shoulthwaite Farm, and then came to a forest road which was signposted to Raven Crag and Castle Crag Fort.
This track gave good views of the crags on the east side of Bleaberry Fell and I must have been somewhere near the top of Raven Crag, but there didn't seem to be a way up to the summit.Instead, the track went a long way into the forest before coming to a dead end.
I then went back to a gate which led out into the open hillside, and then had an awkward pathless walk along the edge of the forest before rejoining the path down to Armboth.
I was disappointed not to get up Raven Crag.I'm not sure if the signpost was deceptive or if I just missed a turn somewhere.
I'll have to try it again another time.

You definitely chose the right conditions to complete those Wainwrights, and yes that is the summit of Armboth Fell. Raven Crag is also a nuisance to find the ascent path. Keep on enjoying your lakeland adventures.

Another fine report Andy, good idea to get the boggy stuff done whilst it's frozen. Looks like you had good weather for it with some nice pics from Englands best

Good thinking doing those on a frozen ground

A nice walk except for the return to Armboth! Enjoyed your photos

Did a smaller version of this walk a few months back over your first two and much earlier for Walla Crag over Bleaberry and High Seat finishing with Raven Crag. Managed to reach Ravens summit the first time as the path to the top was being forested but the guys in the vehicles allowed me to pass. On our last attempt, this path was closed off by fallen trees with no way up. I assume this is probably still the case, several months on.We reached the end of your path to nowhere and ended up crashing through the woods down towards Thirlmere edge on our walk.