Kevin and myself had a late start on the hill (10:10hrs) after getting stuck behind a house on the way to the hill.
The day started out really good, not long after getting out of the woods we had shed a few layers and were enjoy weather By the time we were hitting the snow line, the weather started to close in, it started with sleet, which soon turned snow, backed by a heavy wind, we battled on and the snow under foot was starting to turn to ice. We found a little bit of shelter and put on an extra layer or two and out came the spikes. The weather was changeable throughout the day, great views to not being able to see beyond 70 or 80 meters, but the views were cracking By the time we had reached the top of Number 4 the winds had dropped, the sun was out and it was a glorious afternoon, a cracking end to the walk. 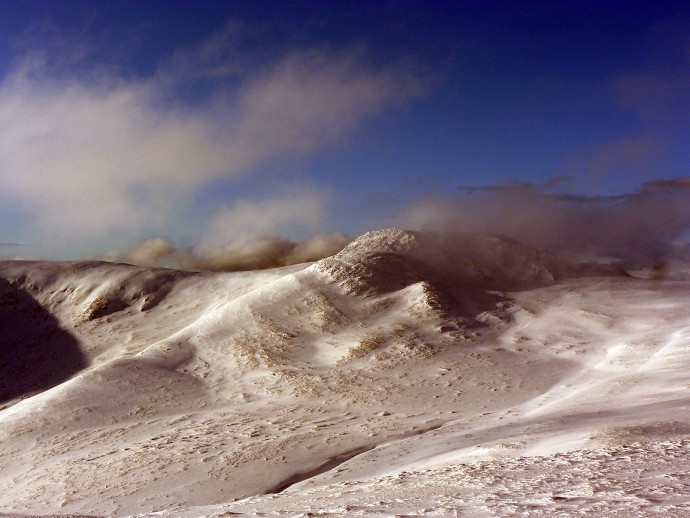 The final decent down was a bit of a slog, the path was good enough, but after 8 hours on the hills I think we just wanted to be off the hill. Some super photos there

- greta pics - looked a fantastic day out! Know what you mean after 8 hours I tend to be dreaming of beer and steakpie!

It was a late start for such a long walk, but it was worth it for the views when the weather cleared

Kev had the micros on and felt they were at the limit a little on the way up, a layer of soft snow onto of the ice meant they were not getting a chance to dig in, once we got to the higher Ground where it was more ice than snow, they did great. It was crampons for me on the way up and they were great

It's a nice enough walk at many other times of the year but looks fantastic in the snow - turned out well...a great day for it - cheers

A lie in, a sneaky day off work and out in the hills - cant ask for more.
Start was a little delayed as we followed half a house on the back of a low loader from Callender all the way to Lawers.

Thanks RH, it was really nice during the clear spells