An outing with 6 of us. Two cars taken and we parked up by some buildings next to the road at Achnasual. We were not prompt, it was around 11.00am when we set off. The objective was just Geal Charn. I had done Meall na h-Eilde many years ago from the north via the forest tracks that make this group accessible also from that direction.

We walked down the road to where a wet, boggy track lead up to a small communications mast and followed the track over a side stream and out to open slopes. The track became a path, the views opened up over Loch Arkaig and back to Beinn Bhan. The path continued strongly if crossed regularly by ice where snow melt had refrozen – so concentration was in order to prevent an unwelcome slip. The glen of the Allt Dubh narrowed. 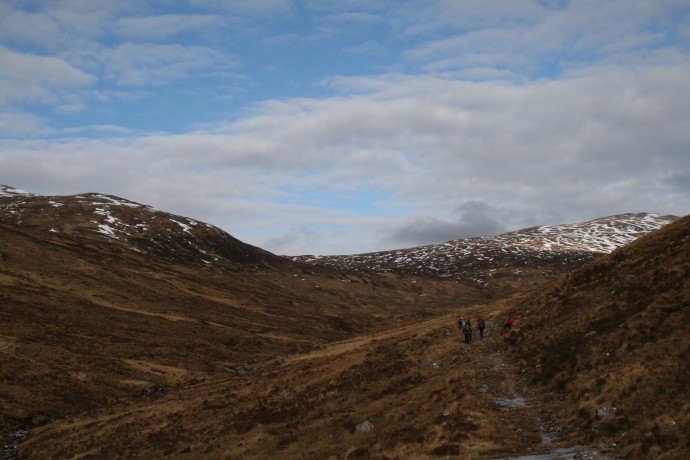 We stopped for lunch in the shelter of a small cutting created by a side stream at around 12.30pm. We continued until the path petered out at the head of the glen and then struck off to the left. We found a snowy run to follow, but where the ground steepened we left it. Looking east we could see the pronounced “U” of the col between the Loch Lochy munros. Eventually the slopes eased for a while before the final rise. Here large firm snow patches made for easy progress. Two of the group reached the summit first. I followed on a few minutes later arriving at about 2.10pm. The stragglers arrived 15 minutes or so later. The views from the summit are expansive. The Ben Nevis area was covered in cloud. 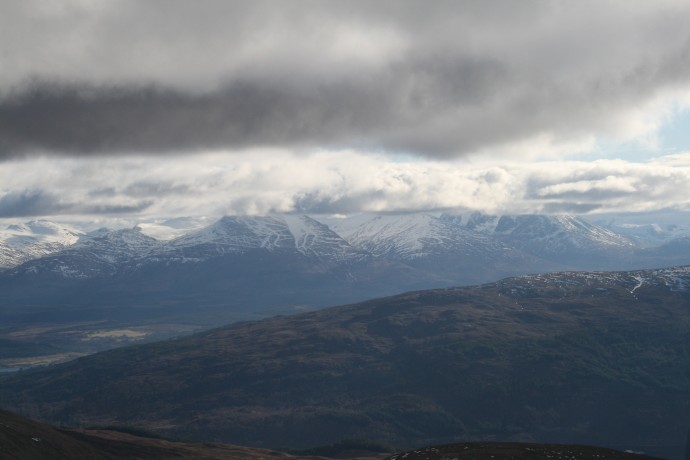 as was poor Sron a’Gharbh Coire. But to the north and west the views were extensive. The descent was uneventful. Two of the group sped off ahead as they were due to attend the Banff film festival showing in Fort William. The evening set in and we were back at the car by 4.46pm. A nice easy day with views that more than reward the effort.

What a lovely day in the hills CL, so good to see someone enjoying a little decent weather and some fine views even with the low cloud away on the horizon in some cases