Maybe I'd better start at the very beginning...I'm a failure!!!

A failed farm dog - scared of the sheep you see! Every time I saw them, I ran away and hid. The farmer shouted and whistled and kicked me, but I was still scared and I still ran away and I still hid! And so it was that I was chained up in a shed - day in, day out...a one year old Border Collie and every day the same, chained up, bored and truly miserable...

But then one sunny morning in early November last year, this wee red car pulled into the farm yard and a funny looking woman climbed out and she wasn't wearing wellies!! Never seen the like, let me tell you. I barked and barked at her, trying to explain that she'd get her feet covered in dubs, but nope! No wellies were put on. Apparently the things she was wearing were what are commonly known as 'walking boots' and you people wear them quite a lot it seems.

So, anyways, she came across to me, I was still barking at her mind, just in case she stood in something, and she looked deep into my eyes, tilted her head to the side just like the sparrows do when they're pinching the barley, patted me on the head and then...yep, she scratched my chest just in that place which makes me go all aquiver! She wasn't as daft as she looked, let me tell you!

Next thing, she rummaged about in her pockets, pulled some crumpled bits of paper out and handed them to the farmer who counted them slowly (don't think he's very good at counting!) before stuffing them into his wallet. I'm sure I heard him mutter something that sounded like 'Good riddance Bob!'

Now the next bit I did NOT like, not one bit. She went and bundled me into that wee red car. I growled, and barked and tried to bite her, but she didn't give up. Every time I tried to get out she just put me back in again... She's stubborn is that wee woman, let me tell you!!! It was bad and bad enough when the car was stopped, but gee-whizz, see when it started moving? Sheep are scary? Nah, they're not half as scary as cars!!! I was absolutely terrified! But she still didn't stop, nope, not her. She drove on and started speaking to me, quietly like, soothing; strange sounding words which I'd never heard before. Words that lilted off her tongue like water rippling over the stones in the burn...words like Sgorr Gaoith, Buachaille Etive Mor, Beinn Alligin, An Teallach....eventually I gave up the fight, and I licked her hand as she reached back to reassure me, just to tell her I hadn't a clue what she was saying, but I liked listening to her!

And so, dear people, THAT day was the start of my new life with my new mummy and also the start of my Munro Wagging career. It seemed only right that now I have my own Munro Map on walkhighlands with 16 wee blue bits on it I should really write my first Walk Report - so here it is!
Woof! Woof!!

Mum is a very busy wee woman, what with her being a teacher and all, but now that I've learned the days of the week, her and me count the days until the weekend when the pair of us head off to the mountains! Last Sunday started just like every other morning...me lying in my bed listening for Mum's alarm clock going off at 5.50am and waiting for her to come padding down to the kitchen. She always says good morning and tells me that I'm a clever boy (dry through the night now!!!) and then she gets her boots on before taking me out for a 3 mile run through the woods. She does that every day before going to school. Now I knew it was Sunday, a mountain day, cos I watched her packing the rucksack the night before, so I wolfed down my breakfast before she popped me into the wee red car. Have to say, I quite like it now. It takes me to amazing places every weekend.

So we headed off towards Aviemore to meet up with Spiderwebb and maybe Holly the spaniel - turned out she couldn't manage that day, probably for the best because she keeps getting lost, daft dog!!! A quick wait in the car while sarnies and coffee were bought and then it was off down the A9 to meet ScottishLeaf at Layby 94. My tethering post while the gear was put on

I have to tell you, my Mum and her pals take bleeding ages to get ready. Me? Jump out the car and ready to go. Them? Thick socks on, heavy boots on, gaitors on, layers and layers and layers of clothes on, rucksacks on, and Mum wears some weird contraption on her head that makes her hair stick up like a pineapple! She looks right daft!!! But eventually I was unhitched from Layby 94's post and we headed off though the gate and up the track. A quick scan for sheep by me - none. Phew!!! I always trot ahead while Mum faffs about with her gps, Spider gets the map out and SL takes lots and lots of photographs. Hill smells are intoxicating...grouse, hares, deer. Doggy heaven, trust me!!! I always add to them I admit, but that means I know my way back to the wee red car.

Off we went, 3 happy walkers and a very happy dog, alongside the hydro aqueduct, past the hydro building up the glen of Allt Coire Chuaich towards Loch Chuaich. The sun was shining overhead, there was a bit of snow lying on the hard frozen ground and this was looking like it was going to be a good day! There was a right nip in the air though, so Mum and co decided it was time to stop for a slurp of coffee at the VERY posh bothy - it even had Union Jack picnic chairs in it! I expected bunting and a royal visit to be honest!!! 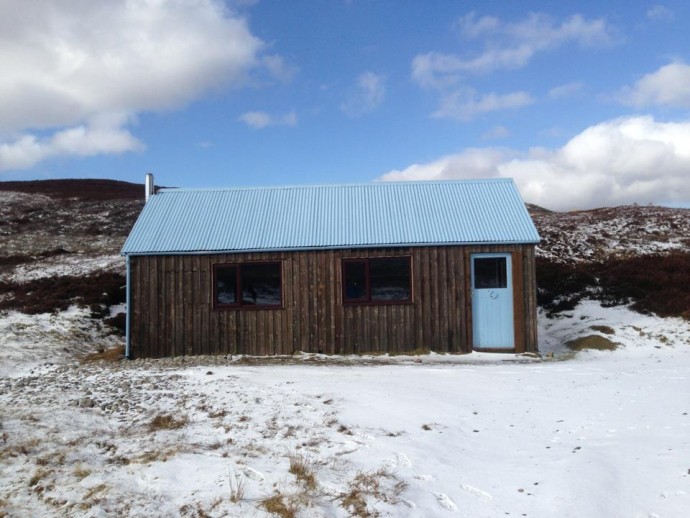 And so we headed up the steep, heathery slopes into the teeth of a gale and ever deepening snow. SL was lamenting his ever increasing waistline since he took up hillwalking - he has developed a 24/7 chocolate habit as a consequence! Mum suggested she take some'flattering' photos to put on his desk to scare him away from the Twix fingers - she's cheeky is my Mummy!!! 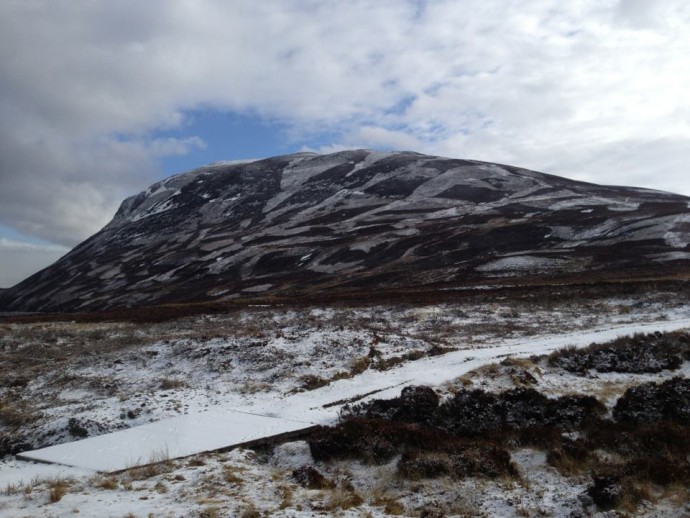 Now I just don't understand this! Mum and co kept stopping for what they call 'breathers' - seemed to me they were breathing just fine! Huge, great lungfuls of breath were puming out of their gasping mouths all day!!! But nope! Another stop, a turn round to look at the views which were amazing to the west. Spider and SL kept saying Creag Meagiadh OVER and OVER and OVER again. Don't know why, but Mum got annoyed and headed off up the hill in a huff with me trotting along to keep her company. Apparently it is another mountain, really quite distinctive in shape, and can be seen from many summits around here. Not been there yet, so can't comment...But Spider was doubled up laughing, so must go there soon to see what the fuss is all about.

Mum was saying that she didn't understand how the Drumochter mountains were so unpopular - she reckons they have a magestic grandeur under their mantle of snow in the winter...I don't really understand what she says sometimes, but these hills are wild and windblasted and the views of ranks of mountains marching off as far as the eye can see make her and me very happy. She takes on a far-off look and I totally understand! Her and me in the mountains, pure bliss!
And so we reached the summit cairn with the light changing to the east, snow coming in fast and the wind biting fiercely. We didn't hang about for long, Spider wanting to head down the icy northern flank to get some crampon practice with Mum...don't bother myself. My canine micro-spikes work just fine!! We had fun in the snow before heading back down, pretty much the same way we went up - I'm not too hot on the technical side of this report writing mallarky but I figure you can always go and read your map and the route descriptions on walkhighlands. And so, my first report reaches its end...my thanks to ScottishLeaf for the use of his photographs (more at the end to give a flavour of the day) and I can't wait until my next mountain day with my Mum!!!
Woof! Woof!!! 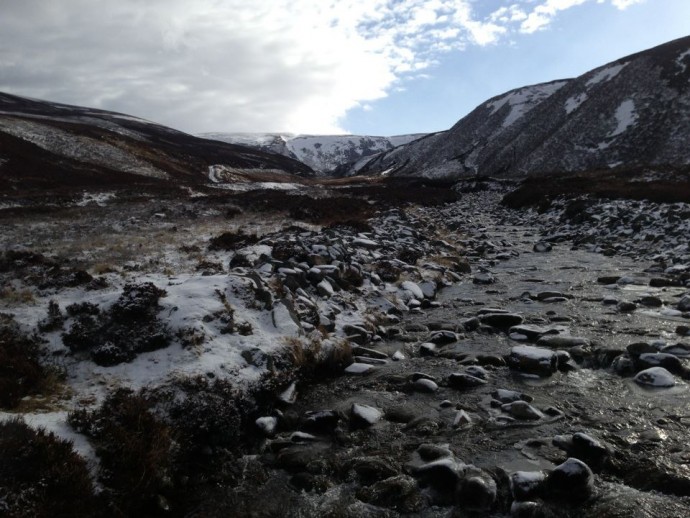 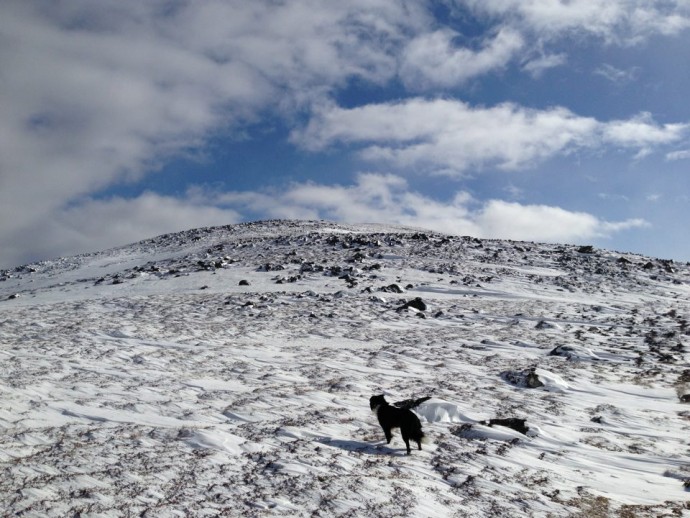 Well done Bob! You are such a clever dog.

A bit mad but highly entertaining

Hope Mummy gets to buy herself lots of goodies with her Webtogs voucher- she deserves it!

PS does that lovely boy Leithy Suburbs still carry a pink flask with him?

i think bobs mum was on the vino ,when she told bob she was walking with leithy suburbs ,im sure it was scottish leaf ,but your wee paws must be sore typing out that report Bob .....great first report So it would seem Gammy! Mum's been texted, fb's been going bananas, and me? There was me thinking what a clever dog I am to have mastered the web and the laptop...first time errors! Woof! Woof!!

Pleased you liked it - the problem is I'm going to hve to write all Mum's reports now!

You could be right Tomsie, but you should see my Mum!!! Totally bonkers, she is!!! See you next week. Woof! Woof!!