That's about as detailed a plan as you'll get with me. It generally involves food and maps and not much else.

I met up with Andy and Neil for bacon rolls, coffee and planning. We had a few route choices in consideration, but we had to find something that was not in the avalanche risk zone and likely to escape the brunt of the brutal Easterly wind. MWIS suggested that the wind would drop over the course of the day and visibility was likely to improve. We hummed and hawed a bit, then plumped for Creise, the sron of which is a damn fine summer scramble. The SMC Coe guide says the coire contains "pleasant winter climbing of a modest standard" which is pretty much what we were after.

We scooted up the road to Blackrock and after some kit faffing (mainly from me) we got on with it. The walk in was nice and short, and I was interested to see someone camping next to the ski car park. That wouldn't be my ideal location for camping, but each to their own.

Soon we had the whole coire to choose from. 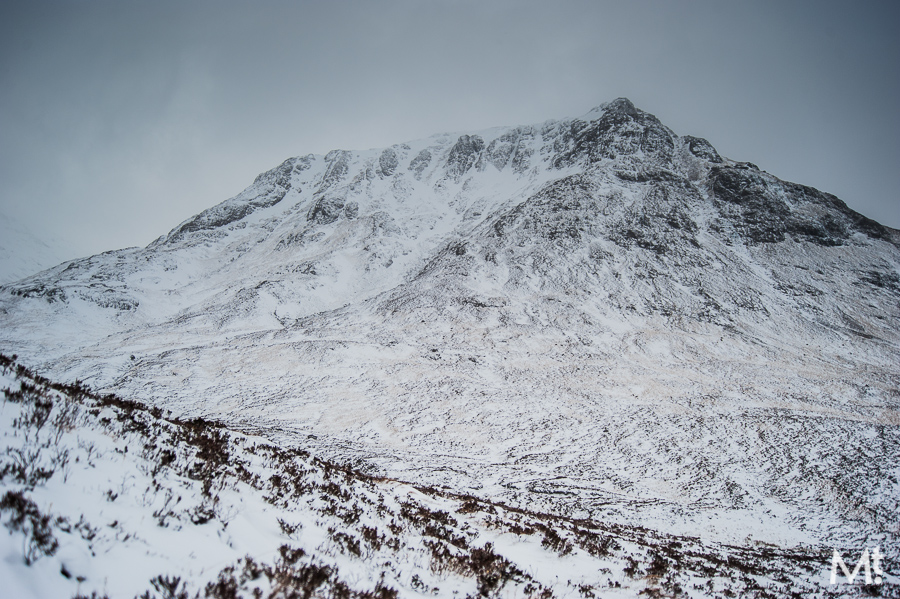 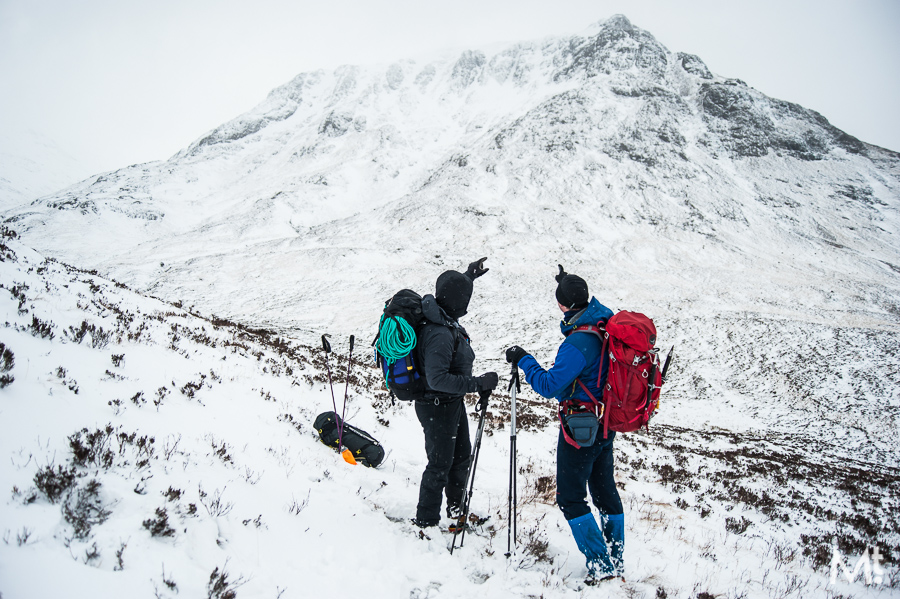 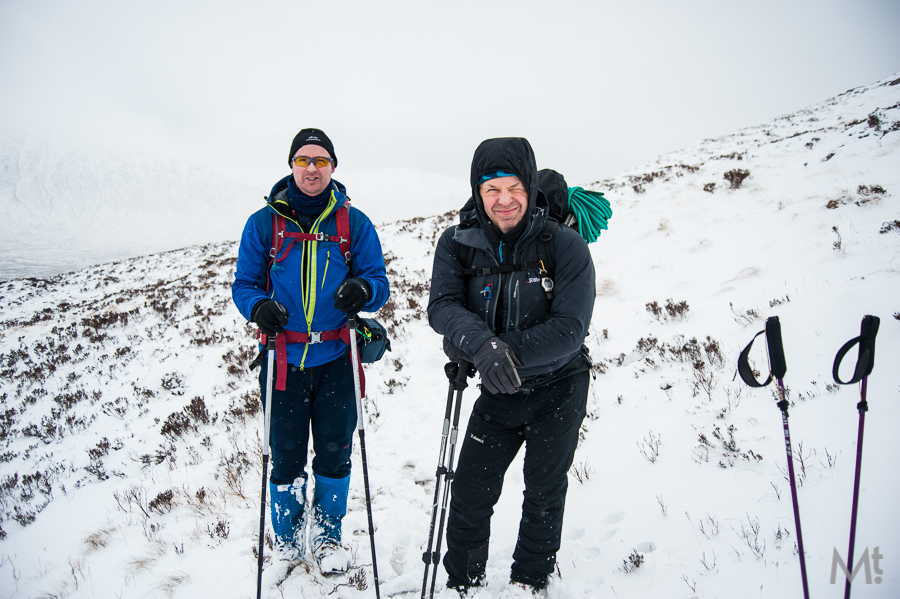 There was a mightily tempting frozen waterfall on the right.  We felt the lure of the ice so plodded of in that direction, casting an eye over to the Buachaille. 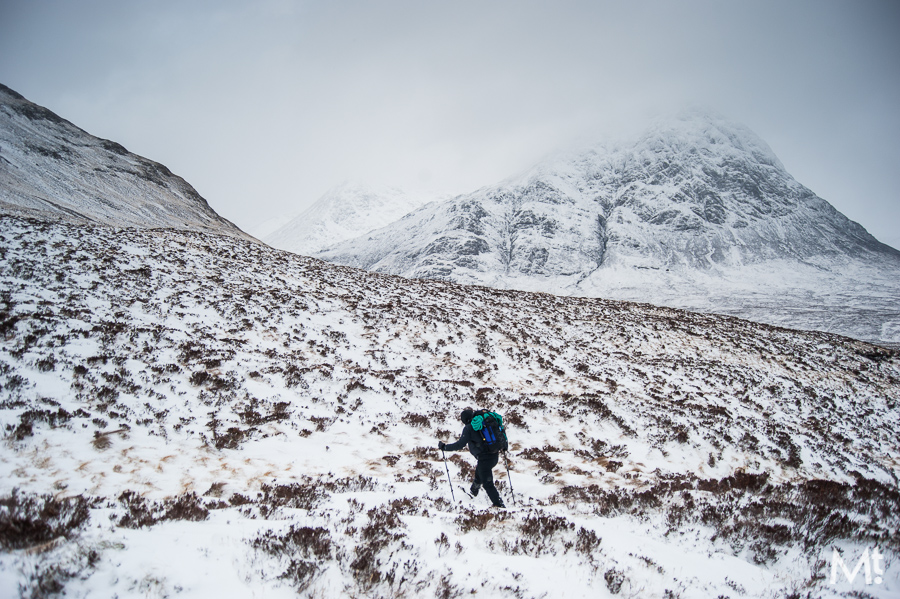 The ice of the fall was good and solid, and only a wee bit dinner-platey, good Grade II stuff with a couple of III moves. we made pretty swift progress up and into the scoop. 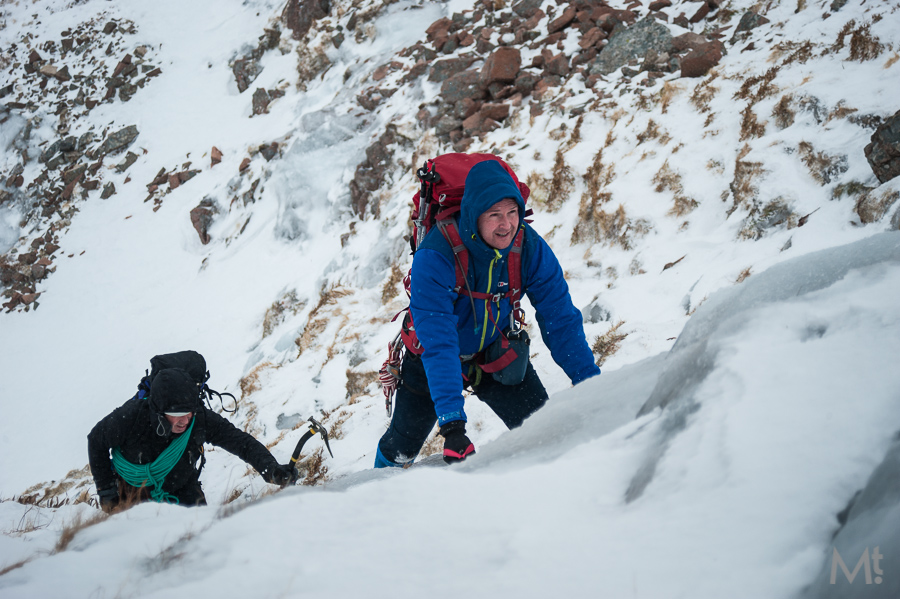 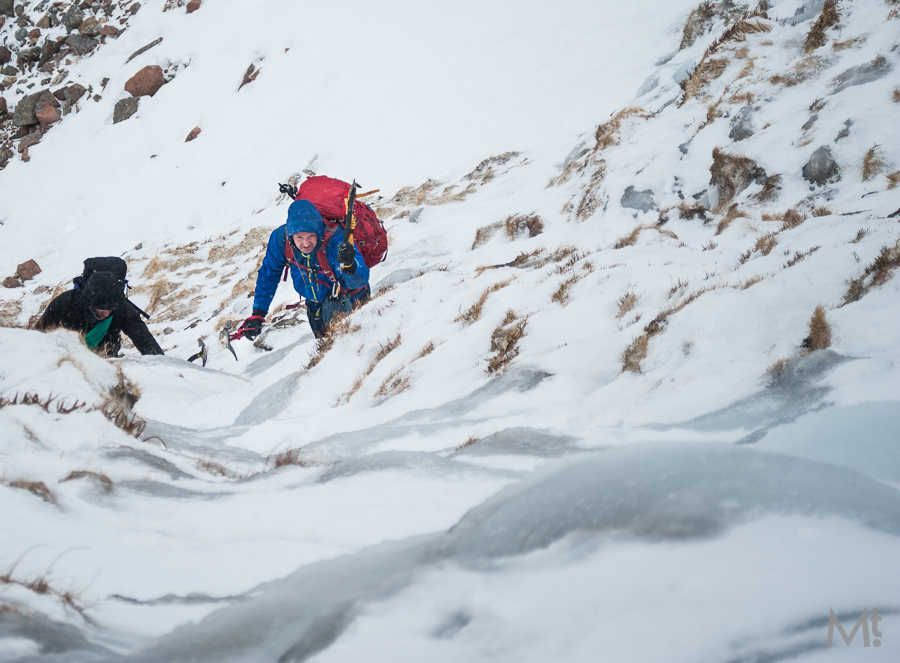 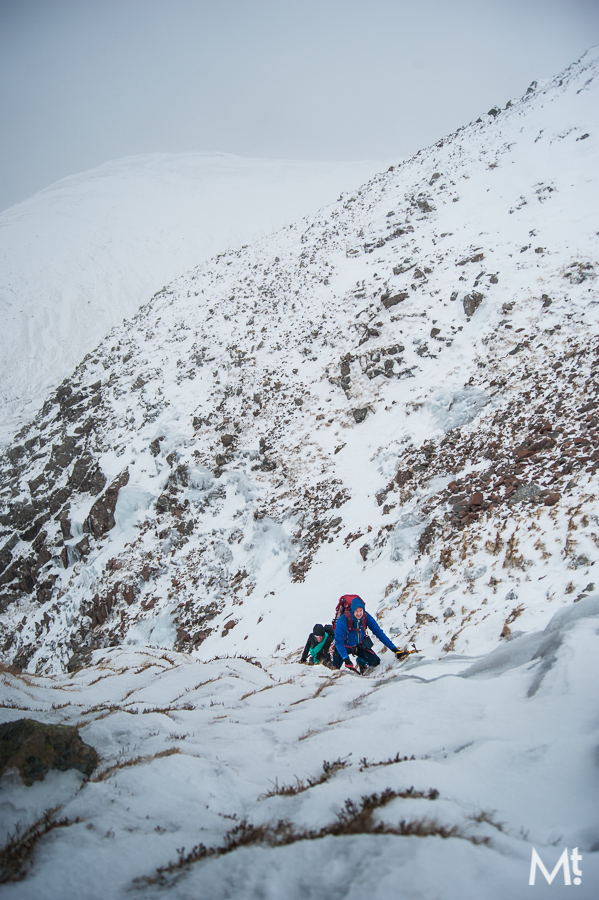 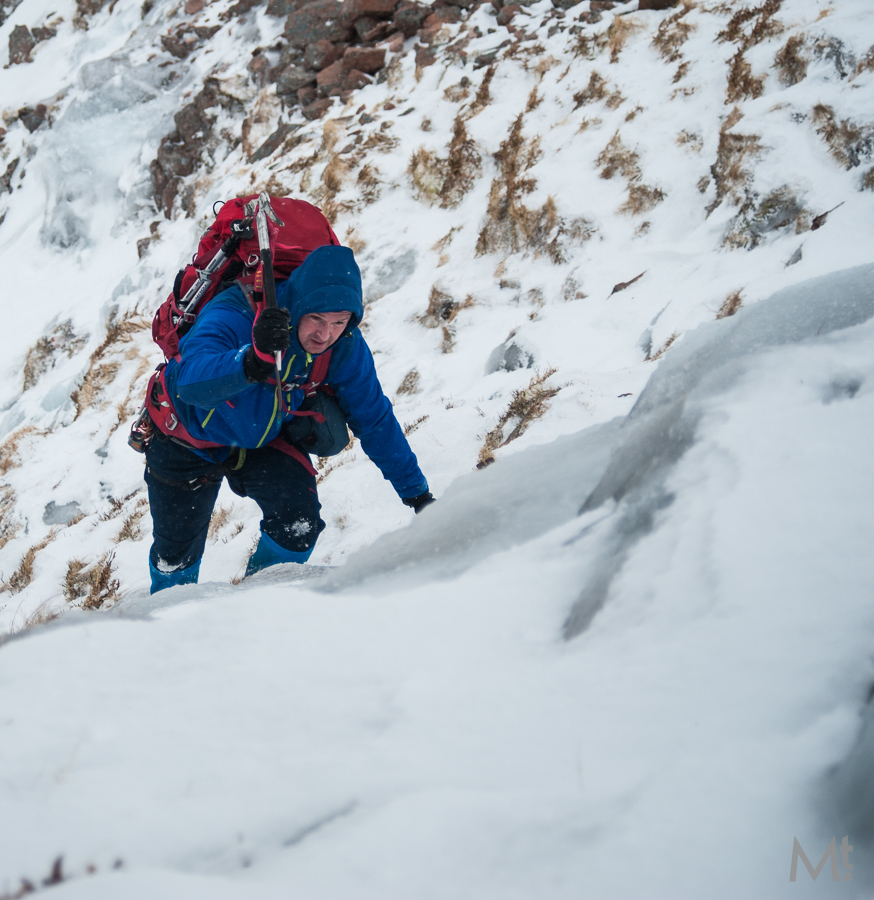 Once into the scoop, the angle eased and we could see the route ahead. The trick was to get back onto the ridge, the most obvious route being a short buttress, so that was next on the list. It turned out to be proper Scottish mixed, with small rock holds, a fine dusting of powder on the ledges and some iced up cracks. It was a bit thin. Andy expressed his disappointment and suggested the rope should be deployed at this stage.  The next section presented a short bulgy rock outcrop with poor holds and thinly iced rock. We pitched this section, tottering up on small edges with the crampons squeaking and making sparks. 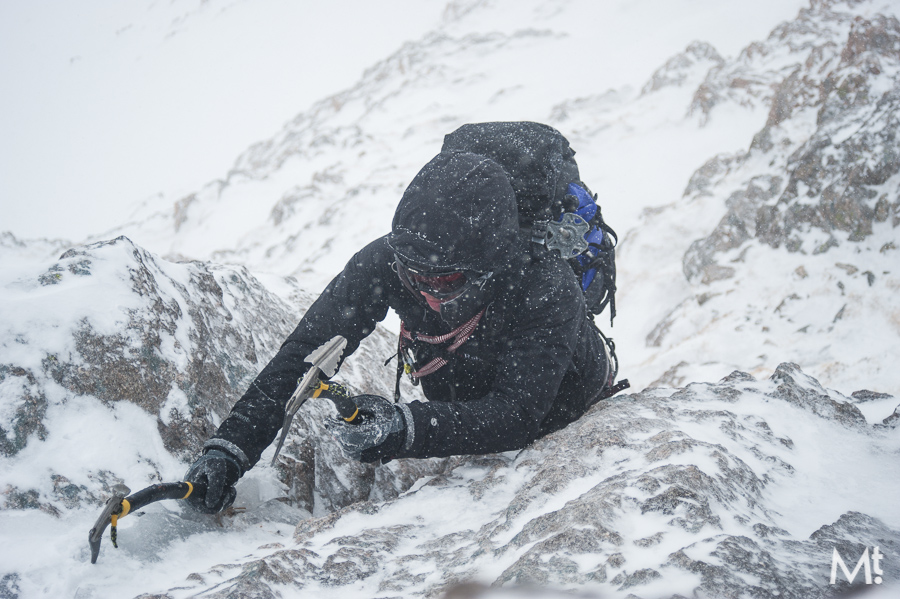 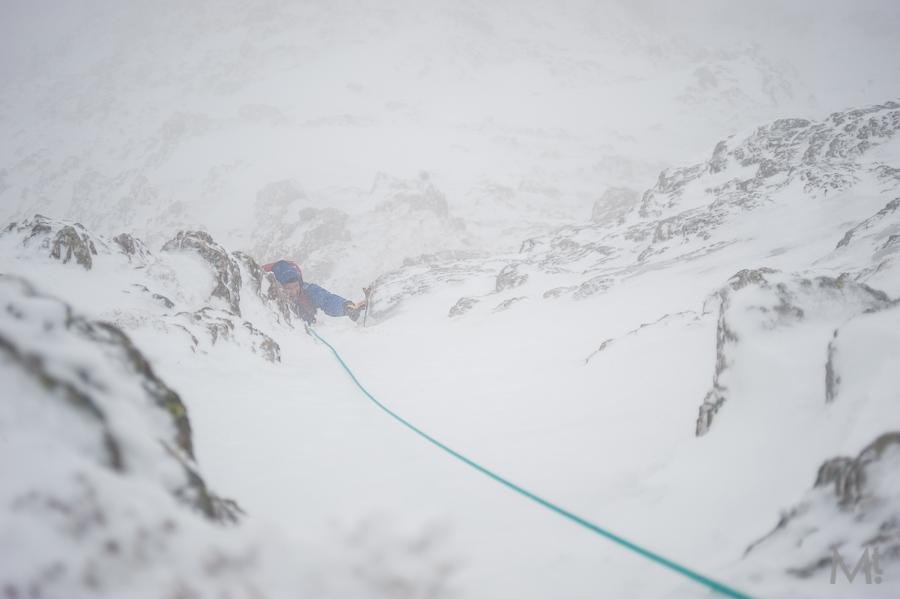 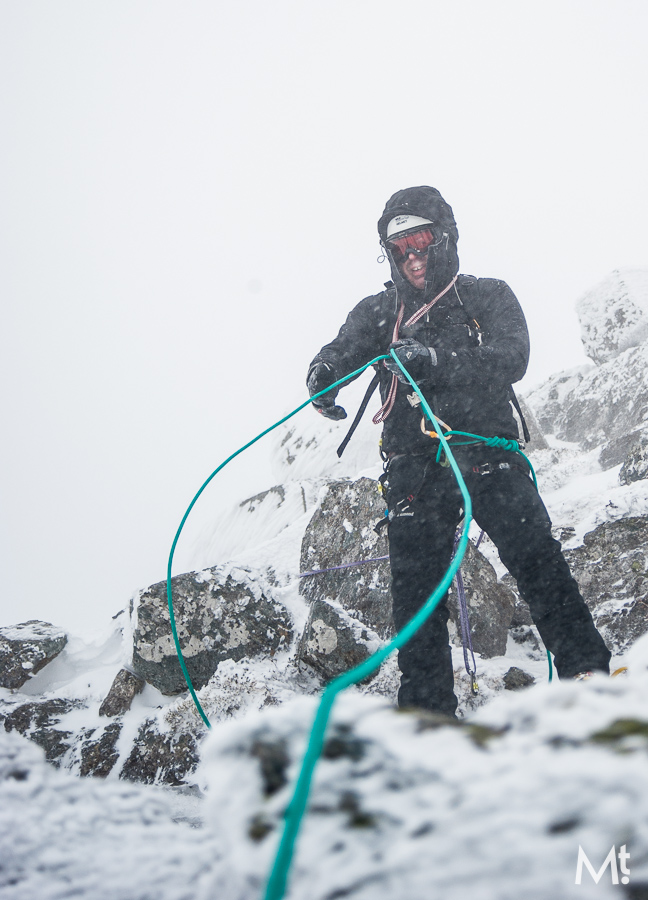 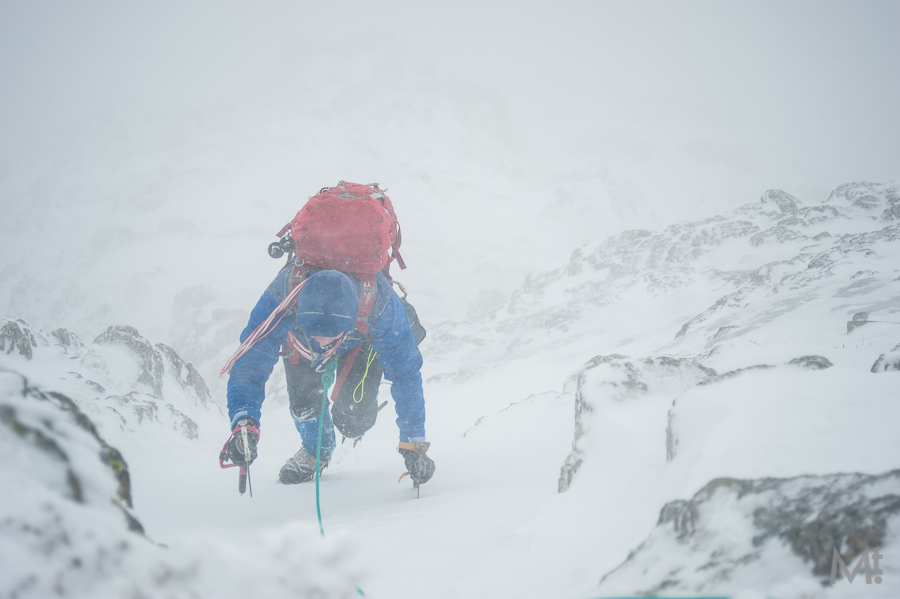 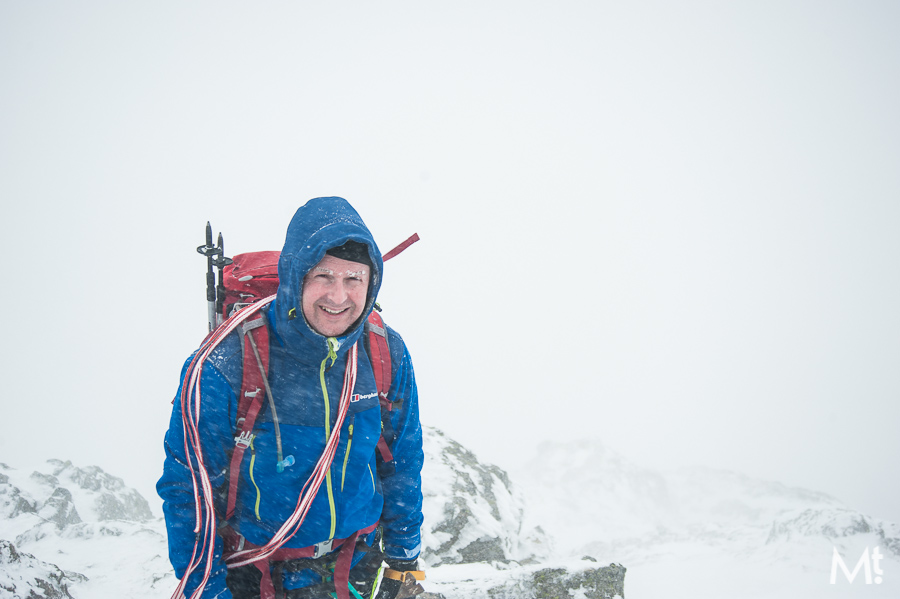 Conditions had worsened by the time we topped out on the ridge and stowed the rope. The wind hadn't lessened as forecast and it was gusting hard. Spindrift was getting everywhere. We considered our options for descent.  We opted for the least technical and headed on over to the summit of Creise. The small plateau was exposed and we took the full brunt of the wind here, with it hitting us like an express train. We then spent some time locating the bealach to Meall a Bhuiridh in what can only be described as utterly crap visibility. Nav is vital to get right in these situations, it's easy to make hasty decisions that can have massive consequences  so we took our time to make sure we had it right before we committed to the descent. We hit  the bealach bang on and then commenced to stoat along the ridge being hit hard by the wind on the right with a big cornice to the left. Care was taken, I can tell you.

The energy sapping trudge up to the top of Meall a Bhuridh was interspersed with a few moments of utter white out, just to add to the entertainment. We topped out just as the daylight was starting to go and after a short spell of micro-nav, promptly came across the ski tows which we then used as guides for descent.

We arrived back to the cars around 8,  which coincidentally is the time that the Real Food Cafe in Tyndrum shuts so the fish and chips I was dreaming about on the descent would not be materialising.

Some good climbing, two munros and some nav practice in chossy conditons. All in all, a pretty good day out.

I got home to find a big dish of macaroni and veggies and a rhubarb tart waiting for me. Kirsty knows a few things about long days on the hills, she's a marvel. 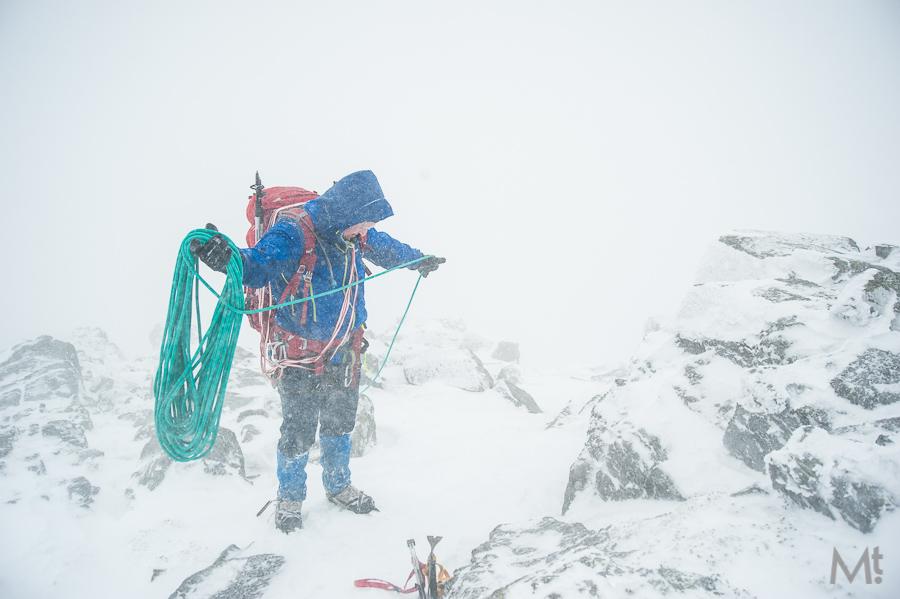 enjoyed reading that, but all that frozen waterfall stuff is not for me! Real Food Cafe starts its summer (!) hours tomorrow.

Aye, that's good news all round, it's my top place to stop on the way home.