Deadly sins on Sgurr an Fhuarain

Deadly sins on Sgurr an Fhuarain

Corbetts included on this walk: Sgurr an Fhuarain


Grey mists that hung over Loch Arkaig - a portend for the day? The road to Strathan was as tortuous as ever, the sinuous way famous for its gut churning effects. I was in the back of the car – John and Caroline in the front. The Dark Mile was gloomy, tempered only by the frost that clung to the mosses. The numbered sites of the holiday caravan pitches were empty, awaiting the promise of spring. The Loch was flat as if burdened by the weight of the gloom hanging over it – not a ripple to be seen. A group of stags watched hopefully as we crawled by. The road was not gritted after the final houses. John proceeded with utmost care, the iced weeps of water presenting hazards at every turn, and there were a lot of turns. At least the speed meant that it was as comfortable in the back as in the front.

Eventually we reached the road end. We were soon ready to march further into the grey. It was 9.30am. There was no wind. The still damp soon clung to the clothes and wet the hair. It soon became apparent that we were overdressed with three layers but we carried on. Just before Glendessary House we turned right to pick up the path that leads over the pass to Glen Kingie. We passed a couple of targets for the shooters, including one in the shape of a wild boar. Shooting wild boar is one of the activities offered by the Estate here to diversify its income as the activity is available beyond the traditional stalking season.

We stopped for a bite to eat perhaps 50 vertical metres below where the path levels off as its reaches the beginnings of the pass. It remained still but overhead there was a blue tinge in the cloud.

Setting off again we soon saw this and the simmering clouds. Oh my! And the bogs across the pass were frozen. I have been this way a few times and never have I had it so easy. 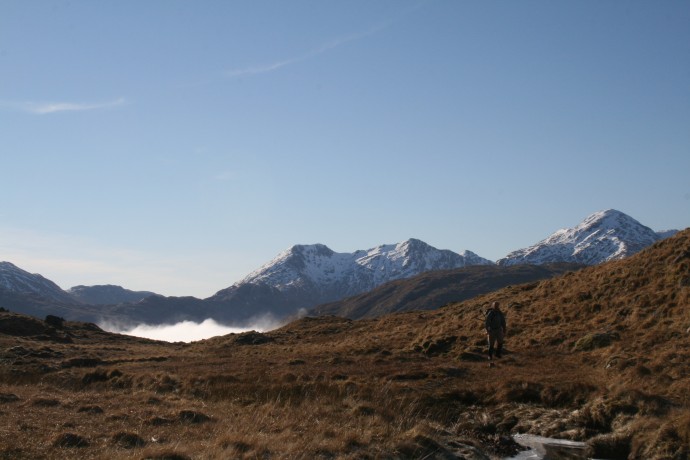 Looking back towards Glen Dessary

Whilst poor old Glen Dessary was cloaked in grey, Glen Kingie was bright and cheery. Sgurr Mor and Sgurr Beag were in view 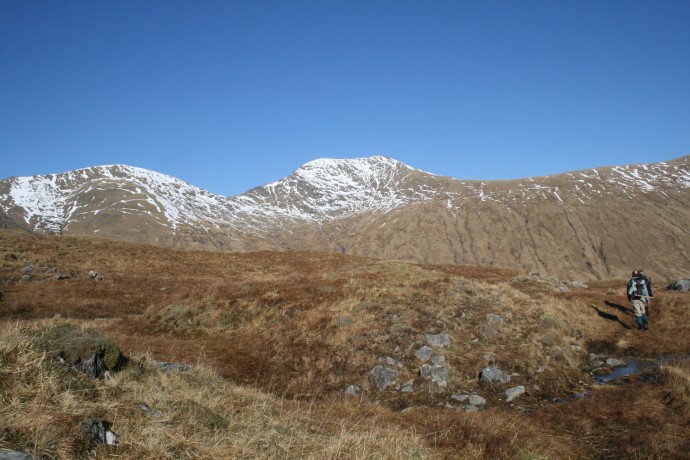 as was the outlier I was aiming for, Sgurr an Fhuarain. Sgurr an Fhuarain and the "wall" - Gulvain off to the right

I say “I” because John and Caroline’s objective was Sgurr Mor. The SMC Corbetts book suggests that Sgurr an Fhuarain is most often done in combination with Sgurr Mor or Gairich. Well, not in my case! We parted ways at a knoll overlooking Glen Kingie after another brief stop for food. They contoured around to the west to pick up the stalker’s path at the head of the Glen. I descended towards the river in the Glen. They were going to do the optional Walkhighlands return route as the route of ascent up and over Sgurr Beag to Sgurr Mor, and then to the bealach I would be aiming for as their descent route.

The air was so still I could hear their chatter for 10 minutes after we split. The hillside down to the river remained in the grip of a deep freeze with the sun barely touching that aspect. Although the river was making a lot of noise, it was by no means in spate. The risk in crossing was stepping on a rock that was covered in a thin layer of ice.

The crossing safely negotiated there is a short stretch of gentle incline before the brutal ascent. And it is brutal, relentless, a wall of grass. Teeth gritted I started up. I passed the site of small landslip. I trended slightly to the right (east), aiming to reach the ridge above its low point. Patches of snow were avoided so far as possible. The views up and down the Glen opened up. 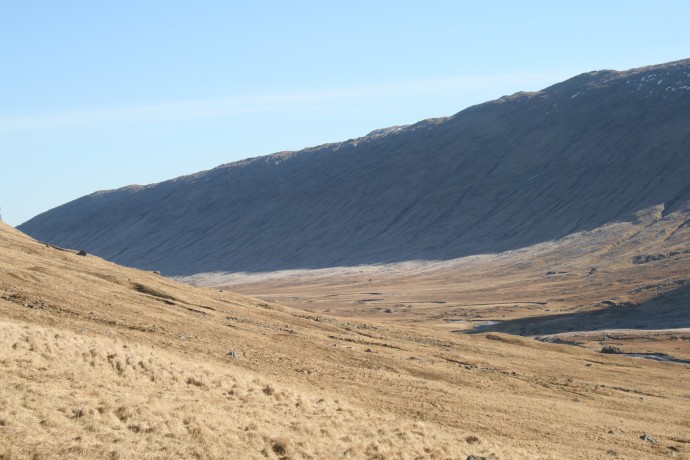 It took just about an hour to reach the bealach. From here the Ben peaked around the side of Fraoch Bheinn. Sgurr Mor and Sgurr Beag towered above. A surprisingly snowless Beinn Sgritheall and Sgurr a’Choire-bheithe lay to the north of west. The Saddle and the South Glen Shiel ridge were further north still. I quickly put on a couple more layers, layers that had been stripped off on the climb. The breeze was missing just a few metres lower but had teeth. It was not too strong but it let you know it was there. Sgurr Mor from the bealach 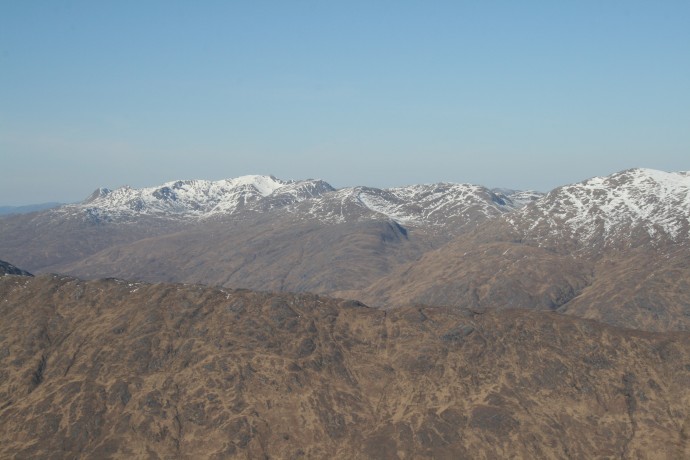 I turned east. The well defined ridge rose ahead. Patches of firm snow aided the pace, only becoming a little awkward where the gradient occasionally increased. Barely 20 minutes saw the summit achieved. The pictures speak for themselves. It was not the breeze that took my breath away. View west from the summit 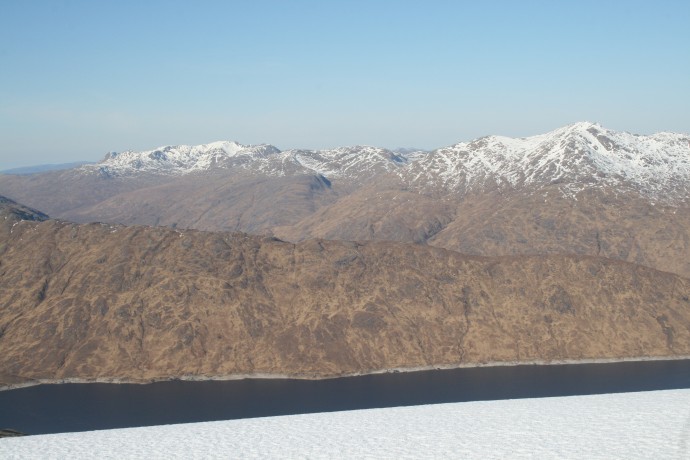 The view east, including Gairich Towards Ben Tee and the Loch Lochy hills The phone buzzed – a missed call. Reception on the high tops, silence below. It was Sue. She was suffering from a cold so had not ventured out today. She was at the Commando Memorial. I rang her back and described the view. Whilst doing that I also looked for John and Caroline. But despite the clarity I could see no black specks on the ridges around the Sgurrs. The spike of Sgurr na Ciche was prominent, plus the Knoydart Munros. I just looked around and around and around. I was almost dizzy.

I drank in the vistas. Do these days satisfy the thirst for being up on high? No, of course not. They leave you wanting more. A paradox? Greed? Lust? Oh yes, I’ll have more of these thank you very much. A lot more – a glutton! Poor Sue. I turned her green with envy.

All good things must come to an end and reluctantly I tore myself away from the summit. I romped down the slopes to the bealach using the snow slopes that had softened a little in the sun. It took me all of 5 minutes. What a buzz! From the bealach I found a few more snow runnels and zoomed down these. Too fast, too fast. There was no point in rushing. John and Caroline would be behind me. So part way down the hillside I stopped for a late lunch. Back out of the breeze I was able to sunbathe and close my eyes. I slowly ate and drank. I was level with the pass over which I had come and over which I would return. I was quite looking forward to the return. 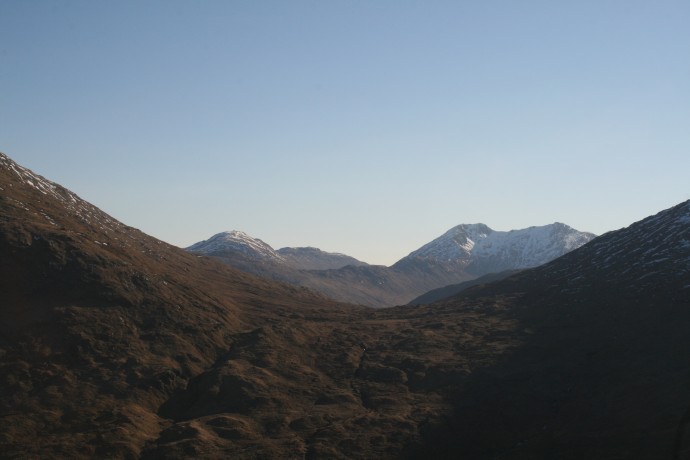 Sgurr Thuilm and Streap stood out against the blue. I wondered how John and Caroline were getting on. I half expected to hear their voices drifting across the stillness. I closed my eyes again. There was some warmth in the late February sun.

Eventually I roused myself from my sloth and continued down and down. The river was easily crossed again, at a different point, and I was back in the icy grip of the north facing slope. The occasional crunch of ice brought me to the pass proper. Although I did find perhaps the one piece of unfrozen bog, the pass was safely navigated.

I cast an eye back from time to time to see if John and Caroline might be spied, but no. I re-entered Glen Dessary. The sun was starting to set. The soft outline of Gulvain appeared. It was just before 5pm. I was soon down to the boar. The hum of a generator sounded from by the cottage. I joined the track and was back to John’s car within 30 minutes. He had hidden the car key, which I retrieved, and I changed out of my boots and stowed my kit. I was quite weary, even though I had not pushed myself that much. I settled myself down to wait for the others.

The sun went down. Sgurr Thuilm and Streap were silhouetted against the sky and the moon rose. They arrived at just after 7pm, just as I was starting to become cold. Getting to the base of Sgurr Beag had taken them longer than anticipated. Whilst the zig zags of the stalker’s path made for easy going, they sweep wide to and fro across the hillside. Then the descent off Sgurr Beag had been rock hard nevé requiring crampons and care.

So it was back slowly along the road into the night.

Rope arcs down
Into space
Who’d want to be in any other place?

Fills my soul
Lifts the heart
Mountain and I never apart.

Am fulfilled
No other way
Carry on to the end of the day.

Sharpens senses
Obvious why
One more push lifts me to the sky.

Route’s the thing
Climb one more
In the mountains for evermore.

fantastic! what a treat that was.

Fantastic read from start to finish again and pictures to die for,brilliant.

Spectacular! That must've been one of those good weather weeks when I had my nose to the grindstone at work