ARKLE
Katie was so lucky on this walk. She had given me a wonderful book called “Rock Trails: Scottish Highlands” for my recent birthday so I was able to keep up a running commentary about the relevant geology throughout the day. We parked at the small space just by the bridge on the track that leads from the A838 to Lone at the southern end of Loch Stack. It was a pleasant walk in with great views of screes of Arkle. 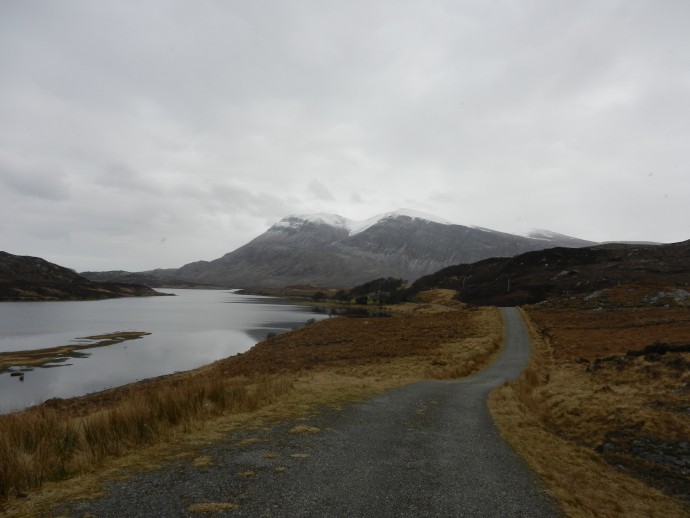 Crossing the bridge at Lone we headed towards a small wood the entrance to which is guarded by two large boulders (erratics). The track begins to climb and reaches a small cairn. We carried on to where a burn reaches the track and then ascended alongside it (on quartzite pavement as I was at great pains to point out). I was also able to indicate several examples of pipe rock which are the fossilised remains of burrows made by worms millions of years ago. Katie was impressed!! Higher up we encountered a frozen waterfall 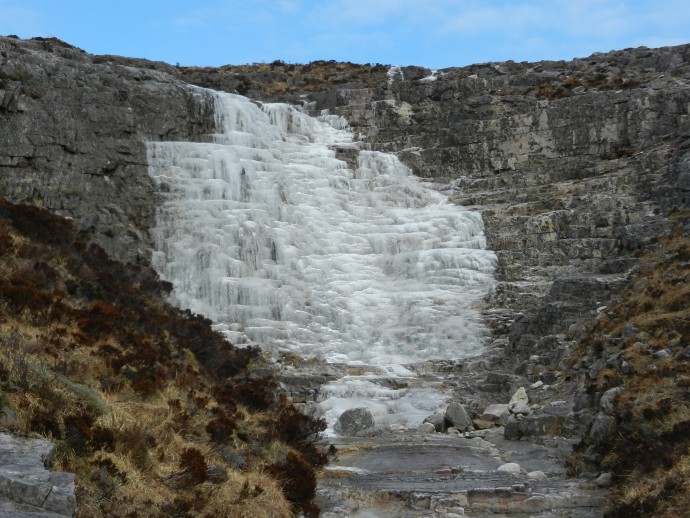 before reaching our first target at the spot height of 758m. We put on our crampons at this point and descended towards the ridge which curved invitingly towards the summit in the distance. The ridge becomes quite narrow as it rounds the huge corrie of Am Bathaich. Some sections were a bit awkward but Katie was fascinated as I pointed out the tilting quartzite pavement and the imbricated thrust planes and this took her mind off the large drops on either side. Katie on the tilted quartzite pavement

After this excitement the ridge broadened out and we made our way easily to the summit. The views across to Foinaven were spectacular. as we made our way back to the spot height at 758m and then walked round the top of An Garbh-choire to the frozen Lochan na Faoileige. From there we dropped down to the path and the walk out to the car. Later that evening over dinner I gave Katie a test just to make sure she had been listening to my geology lecture.

Thrusting stones of heaven, this is a lovely report.

Very nice indeed. I like the frozen waterfall. Sometimes I entertain Rudolph with education about the flora from a book I once gave him, funny how he seems to glaze over at times!

Lovely photos... the geology in the area and the appearance of the mountains are very different to the rest of Scotland.

I'm sure Katie left you behind to look for more of those interesting geological features, having been inspired by your enthusiasm!

What a great walk! I eyed Arkle up on my way to Cape Wrath (when I wasn't yet interested in going up big hills) and was intriged by its 'architecture'. Will definitely do this one when my munro quest gets me further up north.
Thanks for showing the way!

Yeah, that frozen waterfall is something else! A really nice report this, and a bit of a collectors item on here.

excellent pics and TR - you clearly have a way with words!

denfinella wrote:Lovely photos... the geology in the area and the appearance of the mountains are very different to the rest of Scotland.

The snow on Arkle was not that deep - nowhere was it over the knee. Although we did put our crampons for a short distance I don't think they were strictly necessary. I was glad to have an ice axe though. Some aspects of other hills had rather more snow though - very variable but mainly softish.

So disappointed that you failed to mention Katie's test results!!

She did OK but we might just have to go back so that she can improve her grade!