It seemed like today was planned to the nth degree - but as you people know, the best laid plans of mice and men gang aft agley, and fortunately in this case!

You see, the plan mum had in mind was to walk a couple of new hills for her, Spiderwebb and me: Meall a'Bhuirdh and Creise...but after a bit of a late start from the Red Squirrel Campsite, (nothing to do with us being in the Clachaig til closing time or battling the decidedly frosty weather to keep warm on the numerous night time excursions to 'water' the plants, honest!) we took to the road having debated walking or sight seeing - then mum and Spider found the tea room in Glencoe village and after copious coffee and carrot cake and cheesecake, the decision was made. Yep, we'll head out as originally planned. Plenty hours of daylight to be had so no worries...

The day was an absolute cracker, sunny skies, snow glinting like diamonds and not a puff of wind. We looked up at the ridge through the binoculars, watching those brave (mad) souls crossing the Crazy Pinnacles - Mum has promised NOT to take me over them thank goodness! She's been there, loved it but doesn't reckon I'll manage in spite of having four paw drive!

And so, we meandered further up the glen, eyes on the hills more than on the road, and it was then that The Great Shepherd appeared...WOW!!! Now those of you who know me will remember my intense fear of sheep, and I was kind of worried! If that is the size of the shepherd, then what the heck are the sheep going to be like???

But Mum assured me that I'd be fine, that the shepherd is Great cos there's NOOOOO sheep to be had up there.

So it was that the gear was put on and the short walk in began in wonderfully warm sunshine. It was great to be right in amongst it without mile upon mile approach for a change. 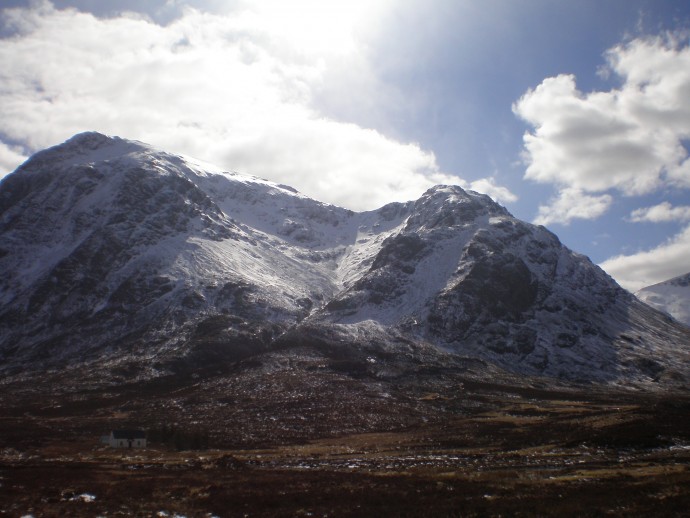 It has to be said, this is one beast of a mountain, and the snow-filled gully meant that it was pretty warm work heading up - Mum needed her crampons on fairly early on and was down to shirt sleeves and shades pretty quickly; and it sure was fun to watch the folks descending on their rear ends apparently 'glissading'...more on that later!

It took us a while to climb up the gully - probably cos Mum kept stopping to take yet more photographs but I think I understand why - the day was just perfect! 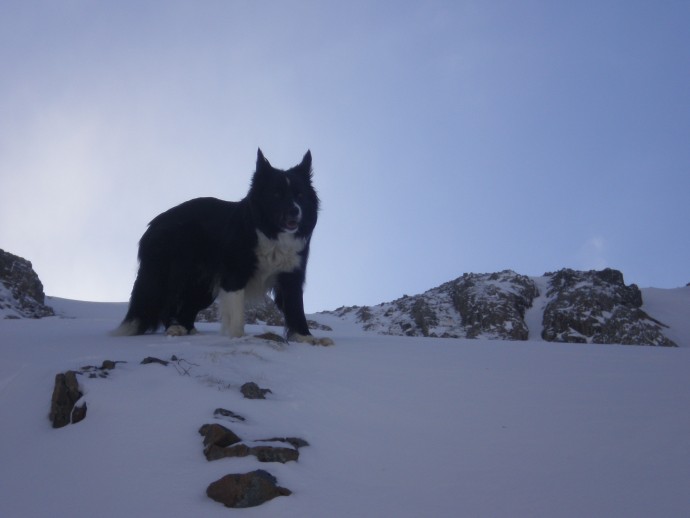 So this is a gully is it?


There was a bit of a worry though, because Mum and Spider saw the search and rescue helicopter flying backwards and forwards a few times - they hoped it was an exercise not a rescue...

It seems that everywhere we go, Mum knows someone!! First, in Tesco, Aviemore, she bumps into Steve who brought the salmon eggs to her school, then later in the Clachaig it was Mrs Barrington (Mum's Primary 6 teacher in 1978!!!) and so it continued...just as we broke out of the beallach, she bumps into Stu who she met at Locheil Outward Bound Centre last year...poor Spider...he was a bit bewildered by her connections I think!!! But I love it cos everybody speaks to me and rubs me behind the ears...bliss The snow was amazing, enough to merit me being put on the lead for the narrow bit out to the summit and for mum to wish she didn't still suffer vertigo!!! She was a wee bit wobbly for a minute but was soon cajoled into 'getting a bloody move on' by Spider - my Mummy getting bossed about for a change - makes a change!!!

Now, what a place this is - I reckon it is my favourite hill so far - the views, oh the views! The three of could have stayed up there for hours, but there was a wee issue to be reckoned with - and that was the descent back down the gully! You see, this has been Mum's first season of real winter walking and she's not very skilled with the ice-axe...and this was not a time to be faffing about! Spider insisted she get it out and after a bit of tuition, she kind of caught on, well enough to be a good bit safer than she would have been otherwise. She's got a long way to go though...I have to say that I just went for it!! YEEEEEE-HAAAA!!!

And so it was that we made our way down the gully, Spider on his back-side for most of it and nagging Mum to have go - she got a wee bit hormonal I think!!! Said something along the lines of 'I'll bleeding do it but only on the condition that you come on the charity sky-dive in May!!!' - that seemed to settle it, she was off the hook! But no! E-v-e-n-t-u-a-l-l-y when she was 'convinced' (read NAGGED!!!) that it was safe, and fun and that she'd love it, she finally gave it a go...and she loved it right enough. I reckon she really ought to start listening a bit more...

And so, we arrived back at the vehicle, another fantastic hill day having been enjoyed by the three of us, and headed back to the pub for dinner and a well-earned pint...and it was then that the mood changed...it turned out that it was no SAR exercise...but there had been an avalanche on Meall a'Bhuridh, the planned walk for the day. And far worse, someone was swept away and killed. It makes Mum very, very sad for the poor man's family and friends and she wishes them condolences at this dreadful news. She's also promised to get a lot more practice done with the ice-axe...

So folks, please take great care out there in these winter conditions, and always keep safety in the front of your mind. And I'm off to have a 'chat' with my Mum to make sure she keeps safe...

But to end on a lighter note, I found a sheep I'm not scared of - the next time you're in Aviemore, have a look in the Mountain Cafe shop window...Mum can't get the photo uploaded...so you'll have to trust me!!!

Re: If that's the Great Shepherd...then how big are the shee

What a fantastic day you had and such a great hill to do......well done you

Bob the Dog wrote:It took us a while to climb up the gully - probably cos Mum kept stopping to take yet more photographs but I think I understand why - the day was just perfect!

I'll let you into a secret.......people often stop to take photos when, in fact, they're just trying to catch their breath as they are probably a bit out of puff

Bob the Dog wrote:It seems that everywhere we go, Mum knows someone!!

Is that because she just loves talking to people

Woof! Woof! to you