The forecast was good again so we decided on an outing to Beinn a’Bheithir above Ballachulish. My brother and I had done this in 2003 in great summer conditions and it was one of the first times I remember being up a mountain on the west coast with good weather. The views from the summit of Sgorr Dhonuil were amazing.

Anyway – Easter Day 2013 and winter is still in control. 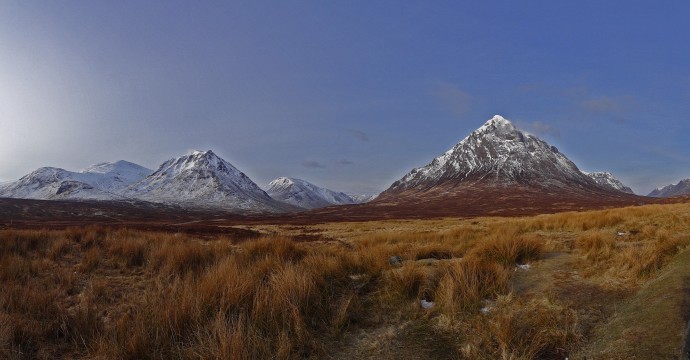 We arrived at Ballachulish around 09.15 and I managed to get lost before even starting ! We were leaving one car at South Ballachulish and taking the other to Ballachulish as we had done 10 years ago to save the old legs a long walk back. However I managed to take a wrong turn and ended up crossing the bridge and being on the wrong side of Loch Leven!! Oops!
Anyway we finally found the correct parking spot and headed back to Ballachulish. Having never done this route in winter I had read a number of accounts which differed in their description of this outing in winter. Some classed it as a Grade II whilst others merely as a hard walk. We took a rope and rack not sure on whether they would be needed – always better to have these than not.
Forecast turned out to be correct and we were soon peeling the layers off not long after staring up School House Ridge (note – saw an amazing sculpture at the primary school of a Highland cow made from fabric- well worth a little diversion!!) 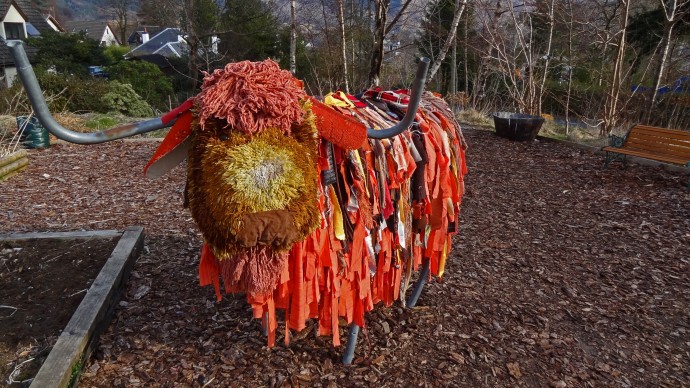 well done to whoever made this - thought it was great

. As we made it past the heathry slopes the ridge became more rocky and as we hit the snow line it soon became obvious crampons were a necessity. We put them on and got the ice axes out – however as we hit the first rocky step it became apparent that the rock was dry and it was actually easier scrambling up with two hands free – so the axes went back in the pack. The scrambling was great fun and the rock was dry. No rope was needed although there were a few exposed steps. I can see how this might get a higher grade when covered in ice and snow. Today however it was the ground and foot placements which required extra thought with the crampons on – the rock was probably drier than our summer ascent all those years ago (although perhaps a little colder!).

Upwards and onwards and soon we had finished the scramble. This is a fine ridge and looking back down towards Ballachulish gives fantastic views. 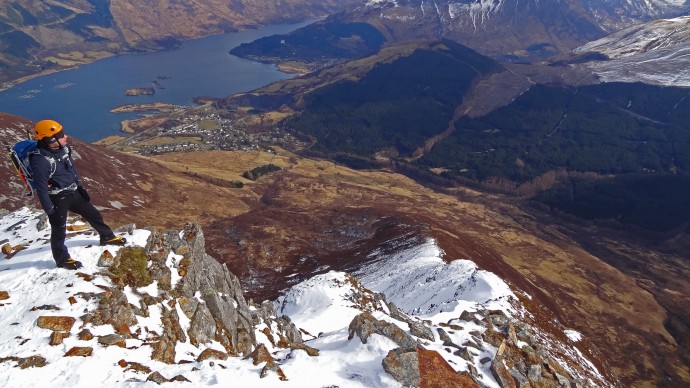 looking back down school house ridge

panorama back towrds Mamores and Glencoe

Onto Sgorr Bhan and the snow was thick, but compact on the ground. We then headed onto Sgorr Dhearg and then onto Sgorr Dhonuil (this final ridge to the summit is slippy and exposed and I would recommend a set of crampons and axe here). 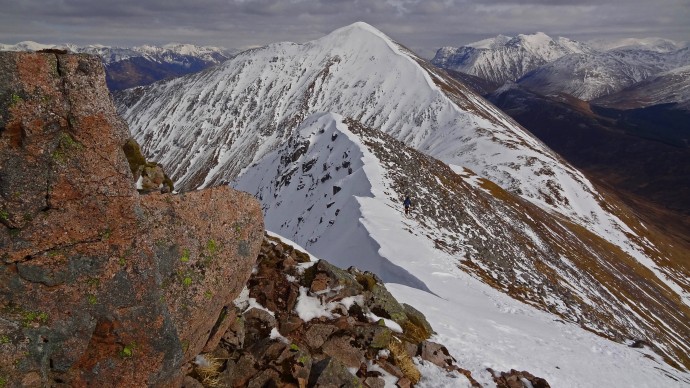 On our last visit we had continued on the ridge west and descended into Coire Dearg. Given the strong east and south easterly winds in the prior week I was not too keen to descend it this time. We instead retraced our footsteps and headed back into the Corrie between the two Munros and back to the car at South Ballachulish. It was now 15.30 and I was feeling tired! The clocks had gone forward the evening before so the hour less in bed was telling!!! However it was a quicker time than ten years ago!! (this maybe due to the fact that we parked the car down at Loch Leven last time and had longer to travel!!).

Great day out though.

Previous trip:
Beinn a’Bheithir 1024m/3360f(107) 20/09/03 Climbed these with Ross. The forecast b4 leaving the house was
Sgorr Dhonuill 1001m/3284f(137) 20/09/03 for light cloud, but on awaking in Perth it was over cast and
Raining. I was to meet Ross at the car park looking over Loch Tulla just before Rannoch Moor. By the time I met him the weather was clearing and by Glen Coe there was a cloud in the sky. I decided to walk this not by the suggested route up and down the same path through forestry commission, but by leaving one car in South Ballachullish anf the other in Ballachullish. We left from the school and climbed Sgorr Dearg and this route provided some nice scrambling and the weather was till good although some more cloud had rolled in but still 90% sun as it was for the mosty of the day. We left the car car around 10.45 and were at the top by 1 pm . It did not take long to get to Sgorr Dhonuill, the second munro and third top of the day, around 45 minutes. From here there were fantastic views over towards Mull and Ben More . We then continued West and dropped down a a red scree slope where some interesting scree running was had. Eventually we gained the forestry road and got back to the car at just before 4 oclock. So

this has just been such a fantastic weekend, your pics are always amazing but these are fantastic!!!

Thanks mrssanta:) the has been some fine weather

Still trying to get photos onto WH using Flickr as loose some definition when uploading this way! New to Flickr so haven't managed to get it to work yet:( tried pasting link between image thingy but didn't work:(

Once again a stunning video with great music - thanks for sharing! I'm amazed how little snow there is over on the West. We've had so much in the Cairngorms that we've not really been out. I wish we'd just headed West this weekend - it looks like everyone had amazing days out.

heatheronthehills wrote:Once again a stunning video with great music - thanks for sharing! I'm amazed how little snow there is over on the West. We've had so much in the Cairngorms that we've not really been out. I wish we'd just headed West this weekend - it looks like everyone had amazing days out.

Thanks Heather - I was expecting more snow too ( took all the gear up but it stayed in the (heavy!) bag:))
Weathers been great

long may it continue

Another great video, really enjoyed that! I liked the part when filming going over the bridge filming through the steel trusses/ supports, very arty

, and glorious views from the top

. Another lovely day for you, you lucky man

Was out again today but conditions (underfoot) were not so good!! Nice sunny morning though...

What can I say, but WOW.. amazing footage, photos and the scenery looks amazing, I cant wait to do this myself...