Knowing the clocks were going forward during the night, we really should have got up an hour earlier to maximise our time in the hills as I had planned for another relatively long day taking in Beinn Fhionnlaidh and Beinn Sgulaird).

After the excesses of the previous two days I certainly was in no hurry to get up and we eventually got underway at 9am, although perhaps the walk would be like the hair of the dog. So with hopes of a better day we left the campsite and followed the forestry uphill before striking out west for Sguilaird over tussock grass. We opted for the southern shoulder, as whilst steeper it would allow us to make good height once we got on the hill proper. The final ascent was well frozen and crampons were required. 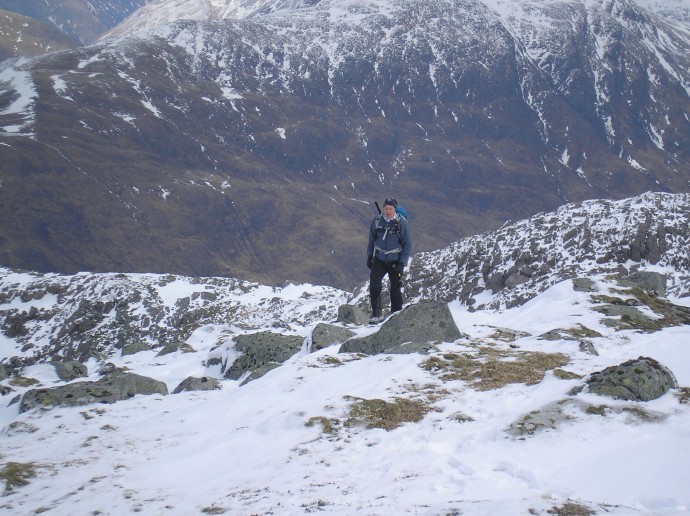 Despite the good weather all weekend the clouds had closed in somewhat by the time we reached the summit and we didn’t get the views we may have done, but it was too cold to wait around for a break in the clouds. For the descent we took the northern shoulder, which was more gentle, but a bit of a drag. However, it was nothing compared to the trek to the foot of Fhionnlaidh, which was in the main featureless, without tracks and involved some needless ascent and descent on tired legs.

From Meall nan Gobhar we followed the line of the fence posts to the saddle at Coire Reidh (although we stayed left of the fence and waterway as this allowed us to avoid the snow almost up to the 800m mark).

Turning west on the shoulder we struck out for the last 160m to the summit. We were now exposed to a freezing (although not to strong) wind and icy conditions. Neil climbed a small rocky outcrop about 20 metres east of the summit leaving an easy stroll to the trig point, where we finished the last of the gin. 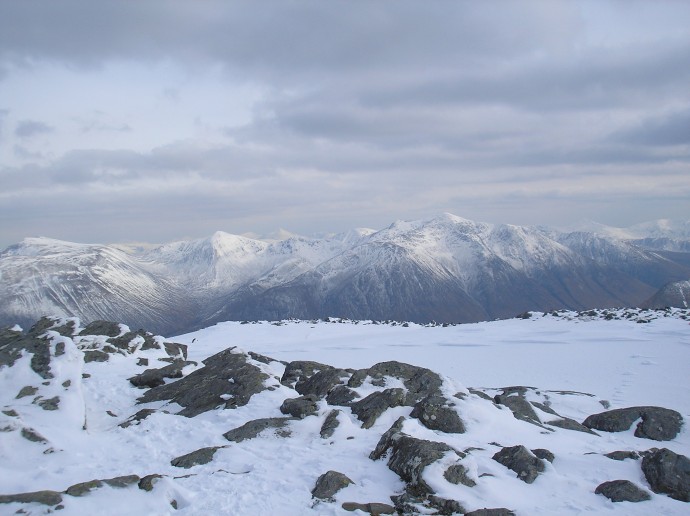 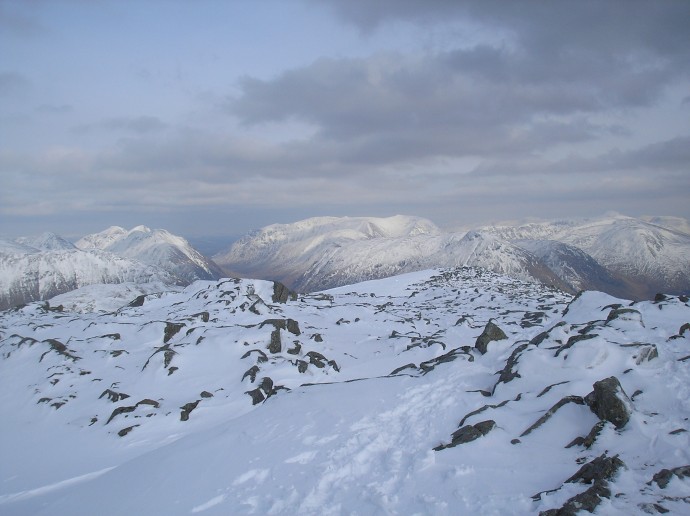 During the descent we stayed closer to the fence-line as this allowed us to stay in the snow for a more cushioned descent. All that was left then was the long walk back to the forestry and down to the camp-site. The walk hadn’t taken the edge of my walking hang-over and although I didn’t feel quite bad enough to say “never again” I was quick to dismiss Neil’s suggestion of a quick hill before leaving for home the next day. It has given me the kick up the backside to get some training in before our summer visit, when I’m hoping to do Mullardoch and Skye.