On most Bank holidays the Elan valley is flooded with visitors who seem to come from mainly Birmingham or the Black Country, presumably to see where their water comes from. On a nice day the area is difficult to navigate due to the number of cars crawling along at 10 mph as their driver's point out lakes, trees, or the hills that are ‘almost as high as the Wrekin’….
However, this is not an ordinary Easter in Wales; there is an east wind blowing, there is snow on the hills and it is freezing! For the first time that I can remember I’ve practically got the place to myself. In fact it is so quiet that if you strained to hear, you might catch the dread toll of the submerged bells of Nantgwyllt church, or the tinkling of the till in Seth Thomas’s drowned general store. Sadly it was more likely to be my tinnitus – in reality they demolished the buildings before flooding the valleys. More than a hundred people were forcibly relocated to provide Birmingham with fresh water, and only the landowners received compensation; a bit different to today’s planning battles over windmills.
Talking of demolishing things I discovered there used to be 5 dams in the Elan valley, but Barnes-Wallis blew up the smallest one in 1942 when testing his Dambuster bombs to see if the theory would actually work; the remains are still there hidden amongst the trees.
To business. The last time I was here a few months ago the layby near Llanerch Cawr was full of stacked logs. They had all gone but the expected cars were absent too, not a good sign. Although cold the valley was quite sheltered and hence it seemed quite pleasant. A little voice in my head was saying ‘Are you sure about this?’, It’ll be fine I replied….
The first part of the journey was straight forward, up a very good farm track that was largely clear of snow and ice but was frozen hard. Most of the slopes in view were similarly clear of snow and ice, so with the bogs frozen I should be able to make good time shouldn’t I?
The track continued steadily upward past sheep and very young lambs sheltered out of the wind by small plantations of trees, and then at a rather nice cataract the track split in two. Taking the right hand fork and then breaking left uphill following a faint off-road vehicle path along a northern spur of the high upland to the south of the Claerwen valley. The gradient is reasonably gentle, but fairly soon reached the plateau-like moorland.
I was in for a nasty shock – not only was the ground frozen solid by the strong cold easterly wind, but it was also covered in a layer of very hard ice and snow. Hmmm, this is going to be harder than I thought.
The guides describe this moorland as being covered in tussocky grass, and but the snow had smoothed out the lumps and bumps so that at one point I would be walking on rock hard ice, and then the next I would be up to my thighs in snow. But for the latter problem I would have got the crampons out – on 1st April in Mid Wales!! However, I didn’t fancy sticking a crampon point through my trailing leg in the pockets of deeper snow, so decided to put up with the occasional bruise on my backside….
The faint path became fainter in the snow and ice, but straying off it led into deeper snow and harder going. The path curves round to the left of the outcrop of Carreg Yr Ast, avoiding the lower ground at the head of the Nant yr Ych and Nant yr Ast. In the distance the large cairn on Drygarn Fawr is clearly visible, but it is one of those that can be seen for miles and takes ages to reach.
I won’t bore you with the long slog to the base of the summit lump, but on sliding and scrabbling to the top of the rise it becomes clear that this large cairn is one of two, and unfortunately the second one is a quarter of a mile away and is obviously higher…. 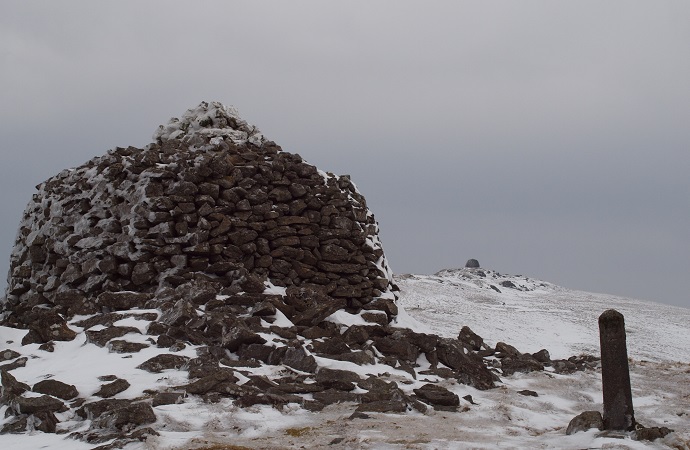 The first cairn is enormous, got to be at least 10 feet high, at least the same in diameter, with a pimple on the top. It is very well made, not at all a rough pile of stones. Today it is also encrusted in hard ice, particularly on the southern side. Apparently both cairns are relatively modern, having been built on the site of the wrecked Bronze Age originals.
Quick strategic photographic break to get my breath back, and then push on. It is patently obvious that this is a really isolated and wild corner of Wales and there probably isn’t another soul for miles.
Crossing the top of the summit lump, I come across a couple of the boundary stones that are marked on the map. They turn out to be square concrete posts rather than the old stone blocks I was expecting, oh well. 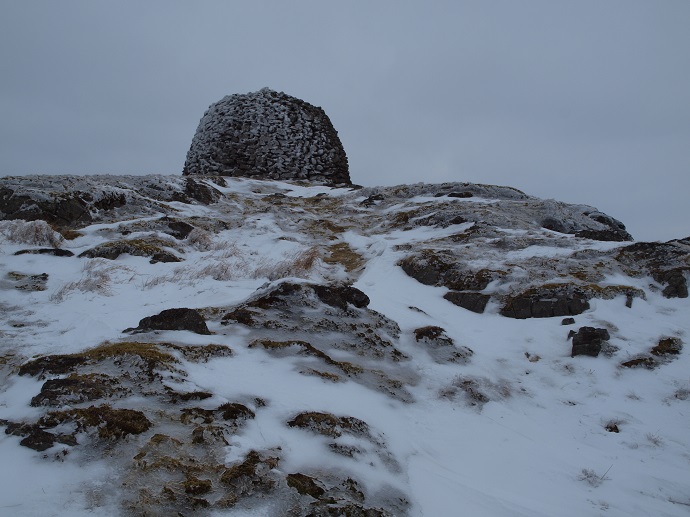 The summit cairn is equally impressive, shaped like an enormous Christmas pudding. Again it is very well made, is a good 10 feet high, and also has a thick crust of ice on one side. The nearby Trig point is quite clearly several feet lower than the cairn. On a day like today under leaden skies, with snow on the ground and the temperature well below freezing, this place really does feel like the middle of nowhere. Time to go! 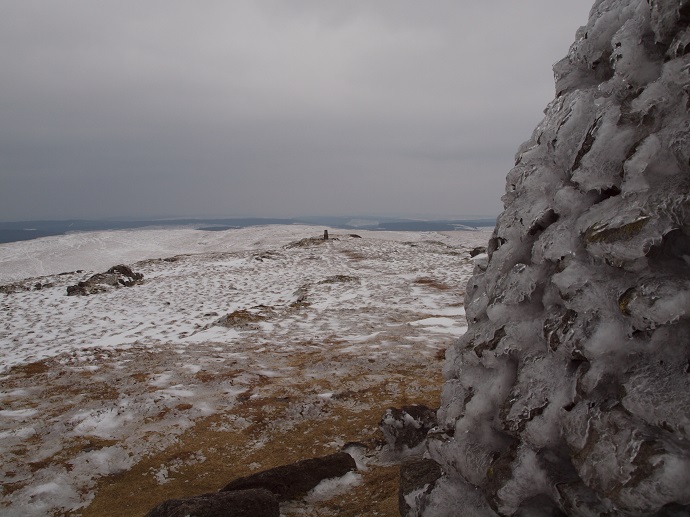 The journey back was harder still as I was now walking into the biting wind. Finding the path proved more difficult going downhill, and a number of times I strayed into deeper snow. A matter of yards from the track I found I had wandered too far right of the path and found myself alongside a stream with overhung by heavy cornices. The snow was again thigh deep, but a wise old ewe showed me the easiest way to escape. Fancy being shown up by a sheep….
Trudging back down the track to the car I reflected on an unexpectedly memorable day where the elements had turned a lump into a worthy opponent. However, my last three outings have now been up bleak, frozen, almost featureless moors but bagging this one also meant I had completed all of the ‘Southern Hills’. I think I need to get back to North Wales and some pointy rock!

Looks an interesting day out Clive, a real battle against the elements. Those cairns certainly look impressive all frozen up.

Damn, that sounds like work Clive, and on a bloody cold day too....though the upside of course is that you get the place to yourself

love the Barnes-Wallis tale, I didn't know that.....now I want to see the remains for myself

Anyway, lovely shots that really capture the temperature and leave me wondering how I'm basking in 20 degree sunshine in the rockies and the UK is freezing

Cheers Chaps, thanks for your comments.

I'm certainly looking forward to getting back to North Wales, and hopefully a bit of warm sunshine!

Oxon Crawler wrote::thumbup: Great report Clive - made me laugh as I've experienced pretty much the same "snow problems" on Aran Fawddwy last Wednesday (didn't felt like laughing by then

clivegrif wrote:Ah you mean that 'I'm going to die!' feeling.....

Nah, wasn't that bad, just something like "I'm going to die slow, cold, lonely and miserable death in here."

I was in the area at the same time, never having been to mid-Wales before. We arrived on the 22nd March, with our caravan, with snow already present, and more arriving as we drove along the Rhayader to Ponterwyd road. At our caravan park at Devil's Bridge there was no snow, it was just very wet, the grass at the side of our pitch pulling my boot down as I walked on it. Too wet for snow to settle I thought, until I woke up the next morning to about 6 inches of the stuff. I'd planned several walks but we couldn't get to them and decided to wait until the biting wind settled down a bit. In the end the only one we did was Pen Y Garn, off the Devil's Bridge to Rhayader mountain road (which road we attempted one day but had to turn back from about two thirds of the way along, having been helped by the American driver of a 4 x 4 who also turned back). Some of the snow was so hard we could walk on top of it and some not so, being thigh deep. Other areas, as you say, were completely iced over.

We also paid a visit to the Elan valley and I was impressed by the whole area, especially covered in snow which probably helped. We need to go back again although I didn't realise it was quite so popular.