Fear and loathing on Beinn Alligin

Fear and loathing on Beinn Alligin


As we defrosted in our tent over early morning coffee we knew we were in for another cracking day out in Torridon. The starry night which brought temperatures down to -8 ish had been followed by a beautiful cloudless morning: perfect conditions for a jaunt around Beinn Alligin. After yesterday's induction into the wonders of walking in this area on Beinn Eighe we were keen to sample another ridge in snowy conditions.
The starting point for the walk begins high above Loch Torridon with amazing views out to sea on one side of the car park and with the Horns peeping out behind the trees on the other. We opted to tackle the two munros first which would allow us to get a real feel for the conditions before considering the Horns. The walk up to Coir nan Laogh is straightforward and the ascent is gradual before you enter the grand bowl and things steepen up significantly. Sunshine was beating down as we made our way to the top of the corrie. 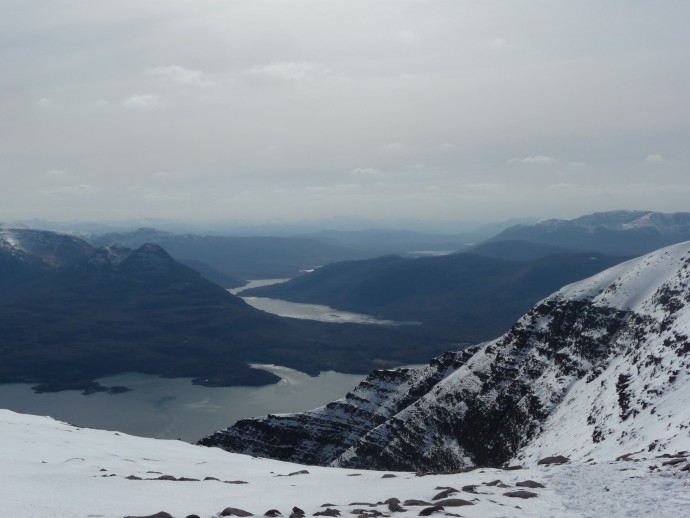 The view really opens up on the summit of the Tom na Gruagaich. The route ahead to the second munro looked straightforward enough but after that the first horn was looking awfy steep. Decision to don the crampons was taken before the descent from Tom could have been slippy. Although the views on the way to Sgurr Mhor were amazing I found myself preoccupied with the thought of heading over the Horns. I have a fairly terrible head for heights and although I really enjoy scrambling, if the exposure is severe, my mind and body can go into freeze mode which isn't much fun. It's happened twice before and I loathe the thought of a re occurance. Looking again at the ascent of the first horn in the distance, the steepness combined with the icy snow seemed to suggest that it would be end of walk after Sgurr Mhor. Enter, from the direction of the horns, inspiration on four legs. A couple and their dog met us on route to summit 2 and assured us that the conditions were fine. I noted the collie's wagging tail and lack of crampons and determined to crack on. The ascent of the horns should have been straightforward but... things can get a little more complicated in the snow and half way up we made the error of following footprints that traversed away from the direct route up and out onto a particularly exposed section. There was nothing technically difficult about following the steps outwards, upwards and back onto the main route but this was where shut down occurred for me. I seized up a few steps out on the traverse feeling like I couldn't move either way. Leonide didn't know whether to laugh or cry as she had already skipped through this section and had to wait patiently on me from above. I think I added around 20 minutes to our walk as I roared and whimpered, effed and jeffed and oohed and aarghed my way back onto the straightforward ascent up, expecting to slip and disappear into Alligin oblivion at any moment. In my own private hell I was hammering the crampons and axe into the snow with such force that I got stuck more than once. It's funny how exposure affects people (or doesn't) in different ways. Trepidation becomes outright terror in the head which becomes a debilitating physical reality. In turn, this impacts on your ability to move efficiently but if you can nail the mental thing then the physical challenge is almost obliterated. Hmmm, must seek hypnosis. top o' the horning to ye Leonide was ready to bounce along the rest of the ridge once we popped out on the first top but I took a few moments to smoke an imaginary cigar with a cheeky nip of cherry brandy. Glad to be alive! The rest of the ridge was a lot of fun and over the 2 horns we went with ease. The scrambling was enjoyable, routefinding straightforward and the views amazing, particularly over to the long ridge of Beinn Dearg. Care was needed on the final descent off the south east ridge down through the sandstone pillars and although not difficult, it would have been more sensible and more fun to ascend this way instead. The final stage of the walk is along an excellent path over two bridges and back through the trees heading directly towards the loch all the time. So another excellent day drew to an end. Each day on the hills is a learning experience, an affirmation. It's good to face your fears, even if it's step by faltering step. As we got closer to the car park the colours in the sky began to change in preparation for a fantastic Torridon sunset. It was the end of our first weekend in Torridon. Hopefully, the first of many.

Well done, what a cracking time you have had....thanks for posting as we are planning to walk over and around Beinn Alligin this Saturday

Hey Gordon good effort considering the fear you felt. I too have had moments and the body just doesn't react the way you would like or want it to. It does get easier with more graded exposure.

Leonide is a monkey eh

Brilliant area. Enjoy this weekend too.

ps check out my CMD Arete report and vids...would be good for you to try this walk as the exposure is frightening on both sides.

Well mountainboy12 we will look out for you on Saturday. Are you aware that its a Walkhighlands meet this weekend with many of us based at the Kinlochewe Hotel?

Well guys, I'm sure you will have a great time this weekend. We're going to be in the neighbourhood too, probably heading round Beinn Liath Mhor and Sgurr Ruadh on Saturday. May the sun continue to shine

[quote="dooterbang"]Hey Gordon good effort considering the fear you felt. I too have had moments and the body just doesn't react the way you would like or want it to. It does get easier with more graded exposure

I know the theory behind that doots but it doesn't seem to be working our for me. I've been up An Teallach, Curved Ridge, Castle Ridge, Aonach Eagach and still no sign of the exposure fear disappearing. Maybe the Cuillin hold the cure...