Quinag was a must on this trip. I had been absolutely staggered by my first sight of this wonderful mountain as I descended towards Kylesku on the Cape Wrath Trail several years ago. It looks amazing from all directions and there is the added bonus of being able to tick off three Corbetts in one day. Leaving the car park at NC233273 and headed out along a well-constructed path. 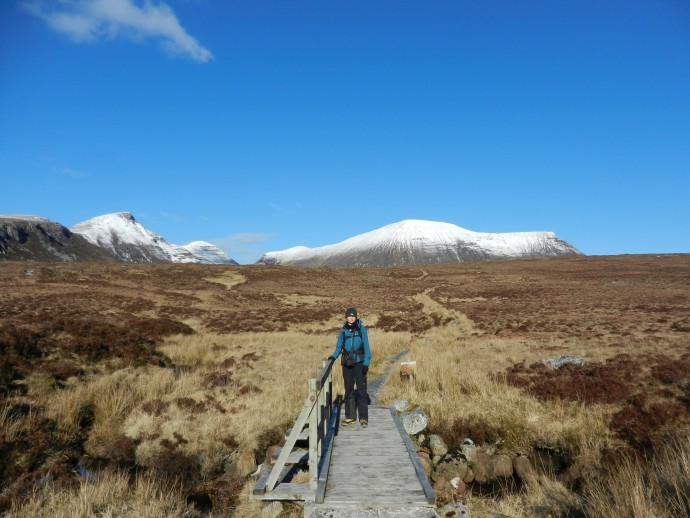 The walk in to Quinag

After a short while a cairn marks the return path, of which more later. “What a good path” I said and within 5 seconds the gravel surface gave way to what would I think would usually be mud. We walked on and were soon enclosed by the arms of Quinag as we approached the frozen Lochan Bealach Cornaidh. 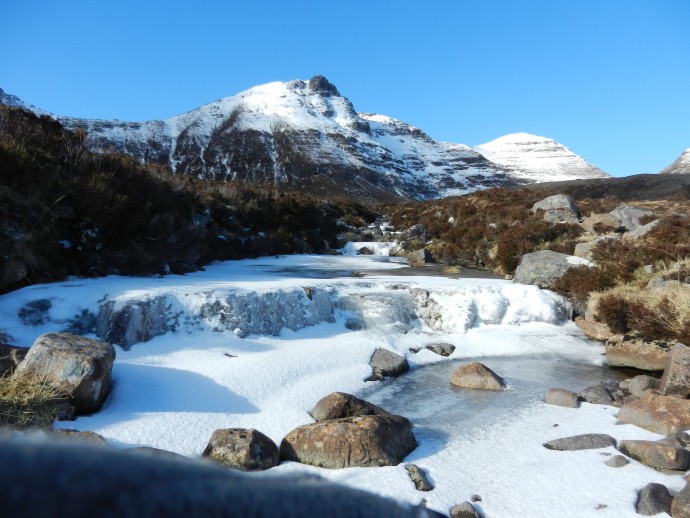 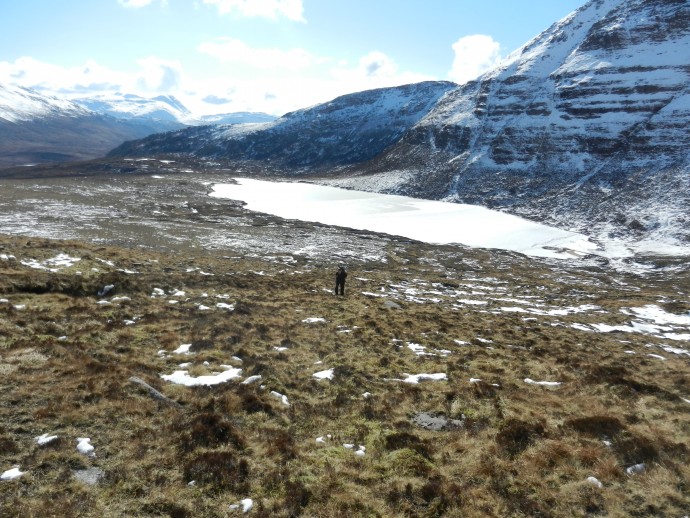 It was so warm we had to take our jackets off before embarking on one of Katie’s short cuts which went very steeply north up to the ridge of Sail Garbh. Katie strode up, hands in pockets, as I adopted a somewhat less heroic style with my nose rather closer to the turf. There was plenty of snow on the ridge and we had brilliant views of the way to Sail Gorm. 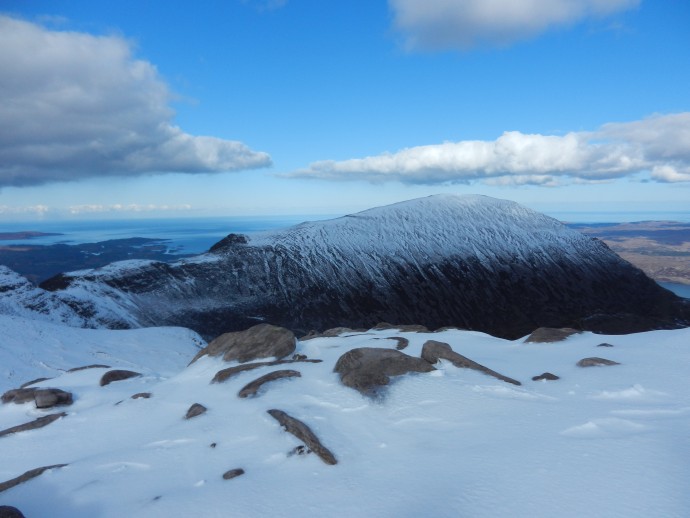 I was able to further Katie’s geological education by pointing out the Glencoul Thrust!
We descended the ridge to the spot height of 745m and then made our way out along the northern arm of Quinag towards Sail Gorm. We briefly used our crampons to descend about 200m to a flattish area from where a narrow path leads to the broad ridge of Sail Ghorm . There were good views across to Arkle in the distance. We retraced our steps to the 745m spot height again. 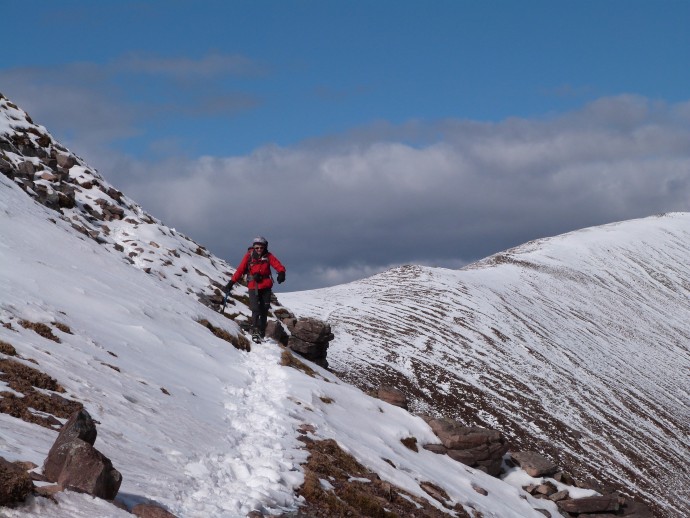 Back from Sail Gorm

Looking across the Bealach a’Chornaidh I decided that I didn’t like the look of the climb up to the spot height of 713m in the prevailing conditions. 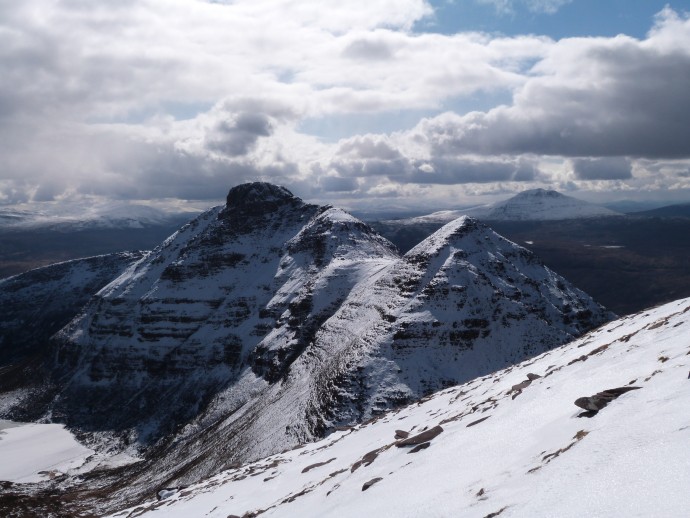 So we descended to the lochan again and walked back to the cairn we had seen earlier. We were so near the car you could almost touch it but we turned off towards the long climb up the east ridge of Spidean Coinich. “Look, Katie, more quartzite pavement!” I said. We encountered more snow higher up and the ridge steepened significantly until we reached the summit. 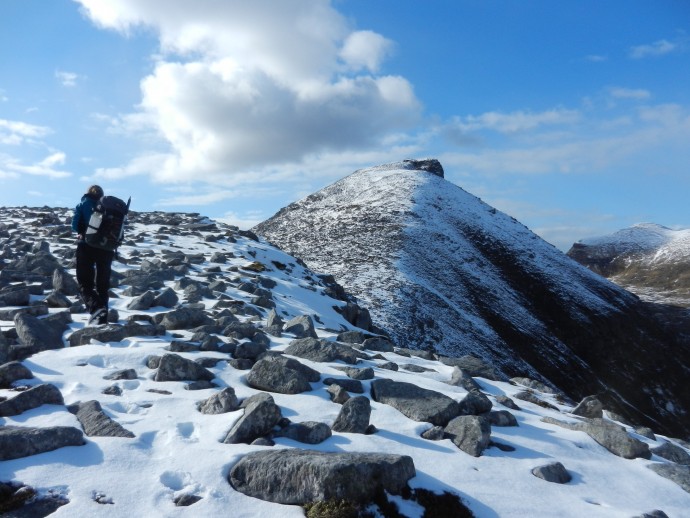 Then it was nearly all downhill back to the car.

A great report of a route that is getting pretty high on my to-do list. Hopefully weather like that will hold until the weekend

Best to know ones limits and make a rational choice

Still to do these

A great hill - I think it's the only "multi-Corbett" in Northern Scotland with more than 2 C-tops to do in one go?
Funny, we did it last year in March and it was like a summer climb, hot, sunny - I remember using litres of sunscreen

BlackPanther wrote:A great hill - I think it's the only "multi-Corbett" in Northern Scotland with more than 2 C-tops to do in one go?
Funny, we did it last year in March and it was like a summer climb, hot, sunny - I remember using litres of sunscreen

We had sunscreen on too!

Lovely, great walk and report, and what a massif....