Gary and I set of from Alexandria at 7.30 so by 8.30 we were crossing the bridge over the river Dochart on the driveway up to Auchessan. the two hill in the back ground coverd in snow Meall Glas to the left.

We followed the well described rout in Walkhighlands. The weather was cold but dry so we were hoping for firm ground and snow and none of the usual mud. The walk up the burn was made more interesting the higher we got as it slowly froze over and looked very picturesque. We got to the dam and had a cuppa before heading over the moor and up the front of Sgiath Chuil. There was plenty snow by now and as it got steeper I really started to struggle, the extra effort to get through the snow and the steepness had my muscles screaming for me to stop. Luckily Gary was breaking a trail and we eventually got to the top very strong freezing wind meant we did not stay long to admire the view. We headed west for some shelter and our second Munro of the day. We bum slid down a bit before we came across some very hard icy snow and got the crampons on. The going then became softer and the decent was a joy taking long strides through the soft snow we were soon at the Lairig a Churain and had another bite to eat. I took my crampons of at this point and we headed up Beinn Cheathaich the going was soft most of the way but there was one section where it would have been better to have my crampons on, still we got to the top safely and headed over to Meall Glas. By now the sun was shining but the wind in places kept it very cool. We had a bit more time on the top to take in the view all round, Me at the top of Meall Glas in the sunshine

Ben More was never out of site but all round views were terrific. The going down hill was again made easier by the soft snow and crossing the broken moor was ok with mostly firm ground we gat back to the car by 4.30 and headed home with a stop of at the Drovers Inn for a coffee for me and a pint of Guinness and a couple of free chicken nuggets for Gary 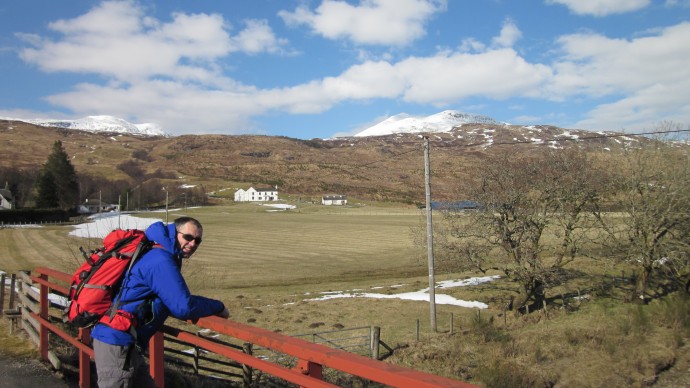 nearly back at the car, and a last look back at Sgiath Chuil covered in snow