GLAS BHEINN
The last hill of our fantastic week in Unapool. I’ll just put in a plug the cottage that we had at Unapool House. Right on Loch Glencoul, stunning views, very helpful people. View from the cottage

We also had an excellent meal at the Kylesku Hotel which does several very good beers. An all round success.
We parked just above the hairpin bend on the A894 near Loch na Gainmhich. Walking a short distance south along the road we picked up the path that skirts the screes of Glas Bheinn. After about 1km the path splits, the left hand track leading to the base of a shallow gully. Climbing steeply up this on peaty steps and finally on snow we reached the ridge. I had to take more photos of Quinag which looked absolutely stunning. Higher up we could see our cottage on the shores of Loch Glencoul. 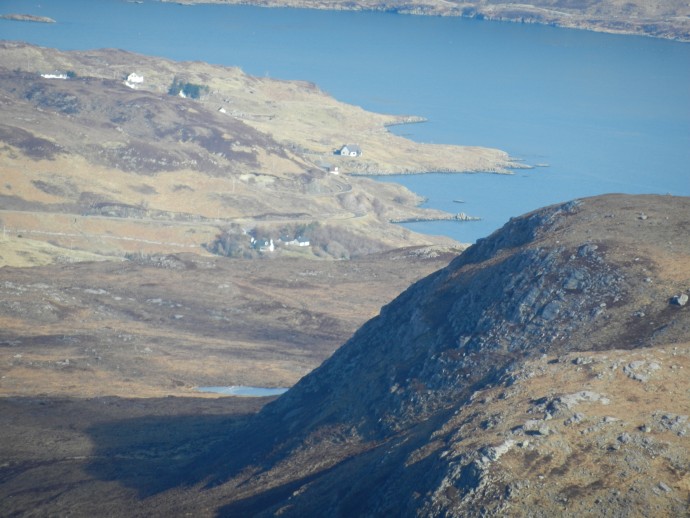 Our cottage is one of those little white dots Going up the ridge

The ice on the loch in the corrie to the west had a weird crazy paving effect. We reached the summit cairn quite quickly and then proceeded along the plateau before descending steeply down the west ridge to reach the bealach shared by Beinn Uidhe. The deep snow obscured the path and we decided to go down through the corrie to our left. This proved a bit dicey as it seemed quite likely to avalanche. But we got away with it. We passed a small lochan on our left and then headed in a north-westerly direction, aiming for a lochan where we hoped to pick up the path. There was some argument (discussion?

) about the best line to take but we eventually made it to the lochan and there was the path. There were a few deer wondering what was going on. We reached the path that descends to the top of Eas a Chual Aluinn and decided it wold be good to have a spot of lunch before going down to look at the waterfall. It was, of course, frozen but was still very dramatic as the ice plunged over the edge. I was hoping that Katie, who wanted a closer look, didn’t join it! Then back up to the main path which climbed quite steeply and then dropped down to Loch Bealach a Bhuirich. From there it was mainly downhill to Loch na Gainmhich and the car. 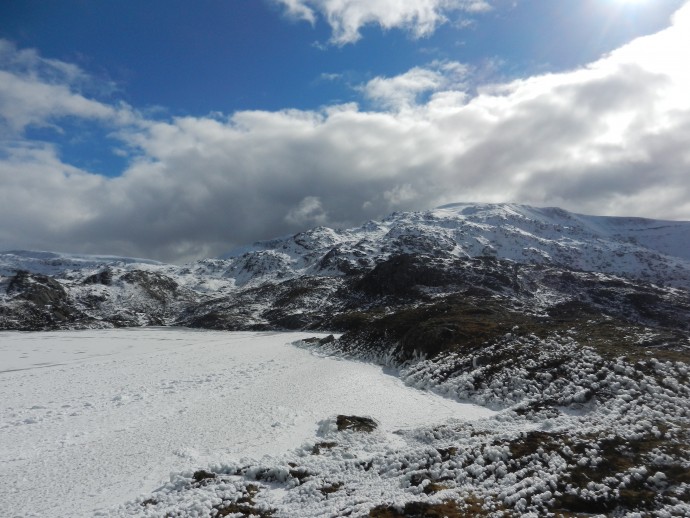 Re: Glas Bheinn and Eas a Chual Aluinn

Looks a fine wee hill and day out