Fire and (not enough) water in Torridon

Fire and (not enough) water in Torridon


It was sheer good luck that plans were revised at the last minute which left us Tuesday free to head for the hills. We've been eying up the Glen Carron area for a while so decided to head for Maol Chean-dearg, as that gave us a plan B (circuit of Maol Chean-dearg) if the conditions looked too challenging

.
After our last outing with Menno, our dogs' favourite hillwalker, they were devastated to find he was working and they would just have to make do with their regular humans, therefore no almond croissants or bridies

. After debating whether this was a fatal breach of their terms and conditions they decided that it was too good a day to miss so agreed to head for the hills - oh with the odd photo stop on the way. I think this is Sgurr a'Mhuilinn seen from the A832 - but please tell me if I've got this wrong.

The little car park was full by the time we arrived at Coulags - we'd planned to be there by 10am - but somehow had lost an hour en route. Not to worry the weather was wonderful, and warmer than the temperature I'd been expecting, so did I shed an unnecessary layer of clothing? - well eventually but only after getting rather too hot

Its an easy start to the route - although a rather menacing flock of sheep guarding the main road had the dogs scurrying for the safety of their leads - and they made no attempt whatever to investigate these woolly creatures. Great path and we soon arrived at the bridge and yes I did fancy a swim, but opted for getting rid of some clothes instead - nothing too exciting mind you I still had plenty of layers to go

We got to the bothy - and its building project Bothy with building project hiding behind it

Followed by the 'Henry Moorish?' tether stone - we tried it for size for Biggles & Bertie, but we'd brought the wrong leads We stopped for a drink and nibbles where the path branches left for the Maol Chean-dearg summit, and I sheded another layer - I really had exaggerated the cold and as a result was hot and sweaty. At this point we'd done three fifths of the distance to the summit, but had only gained about one fifth of the height - the next section was only going to get hotter! So a drink before we go. 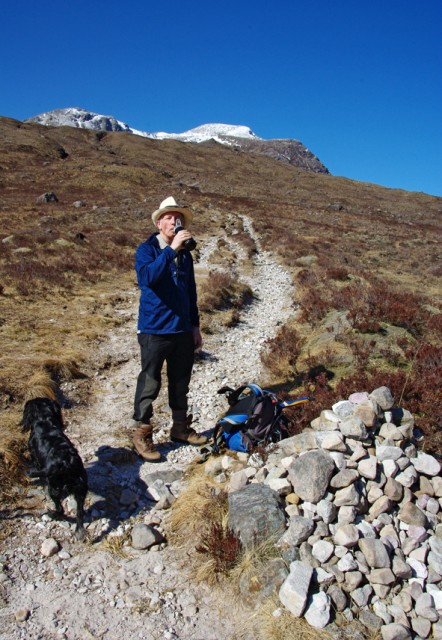 One for the road

Our goal peaked over the slope - the bald red head wearing a white lace cap.

The dogs need sustenance too ... Did someone mention biccies? We passed an icefall en route for the bealach The route really was pleasant going and not a cloud in the sky - gradually the hills around us came into view - but as we got onto the blealach there was a haze just beyond An Rhuadh-stac, not an atmospheric one - this was smoke. 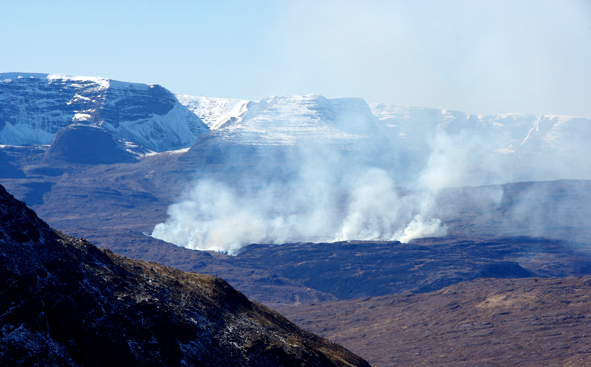 From this distance it was impossible to see whether this was a controlled burn-off or a fire out of control.

We headed up the scree path - and what WH had advised would be the steepest section of the day. As scree paths go this was very good - although I suspect that was because the recent now melt meant the path was damp and therefore firmer. As we came out of the scree into the snow the path was very obvious. This way I think!

The footprints were a great help in navigating the snowy boulderfield - as were the winter boots - but it was a slower job than I'd expected. On this last stretch before the summit we met 3 encouraging people on their way down - they promised it would all be worth it when we got to the top - too be honest I didn't doubt them for a moment! What I could see already was pretty spectacular Once at the top it was - well what can I say? We sat at the cairn eating and marveling at the views - well Roger ate - for some reason I wasn't hungry so I drank some water and munched an apple. Trouble set in when I tried to stand up to head down - cramp in both legs had me alternately squealing and swearing - I'd stupidly over heated to the point of losing too much liquid and that in turn made me gag at food - the consequence was only cramp but in a very inconvenient place

The walk down was slower and much more uncomfortable than the walk up - but hey that meant more time to enjoy the views. By the time we got the bealach An Ruadh-stac had fires on both sides. On the snow coming down we noticed that the quartz scree had taken a toll on at least one of the dogs' paws, and although neither of them were showing any sign of distress I would think twice about taking them into this sort of terrain again.

) and I limped (a bit shame-faced) along the path.
Biggles got rather interested in a small group of red deer - the only wildlife we'd noticed that day, but came back (eventually) when called and seemed relieved to be put on the lead. No need to play the great hunter now

We eventually passed the bothy shillouetted against the late afternoon sky

and were soon back to the start of the walk - the menacing sheep had moved on - and despite the cramp and overheating it was a brilliant day.

Some grand views from the top, now I know what I missed! Ta for posting. Can this weather continue for a wee while longer?

Fabulous stuff, would love to be in Torridon in conditions like this.

Had heard there was a fire problem though.

The Rodmiester wrote:Some grand views from the top, now I know what I missed! Ta for posting. Can this weather continue for a wee while longer?

Still lovely on the east coast on Friday - so here's hoping

clivegrif wrote:Fabulous stuff, would love to be in Torridon in conditions like this.

Had heard there was a fire problem though.

It sure is an area with some awesome views, in every direction