After last week's poor showing in Scotland I was keen to get back out again as soon as I could to start building my hill fitness. The fact that the weather on Saturday looked to be set fair was a bonus and I decided to follow a route I've done a number of times, most recently in May 2012 - the Moel Eilio Loop.

I left Llanberis at 11.20 and followed the tourist route up Snowdon, and almost as soon as I got on the hill I was trudging through snow. Although I was slipping a fair bit in the snow, which hindered forward progress, I didn't feel that crampons were necessary as I was able to pick out significant sections where rocks were exposed.

I worked hard on the ascent moving faster than everyone else on the mountain (and the hill was very busy) despite the fact that I seemed to be carrying more kit than anyone. I decided I should make use of some of this and donned my crampons once I got to the steep section at Clogwyn. 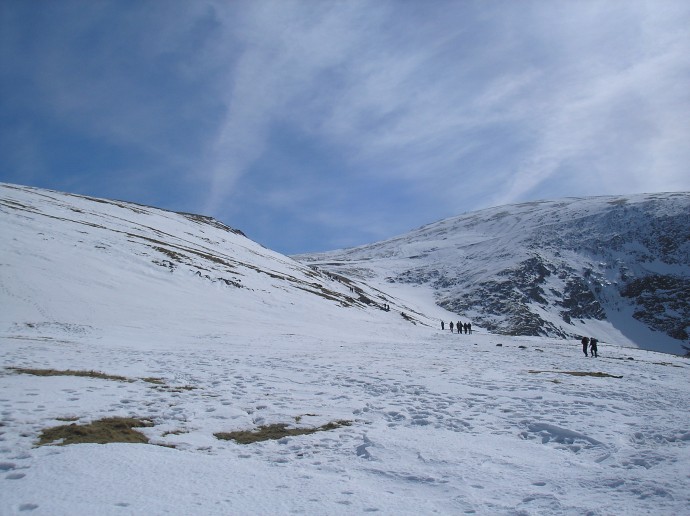 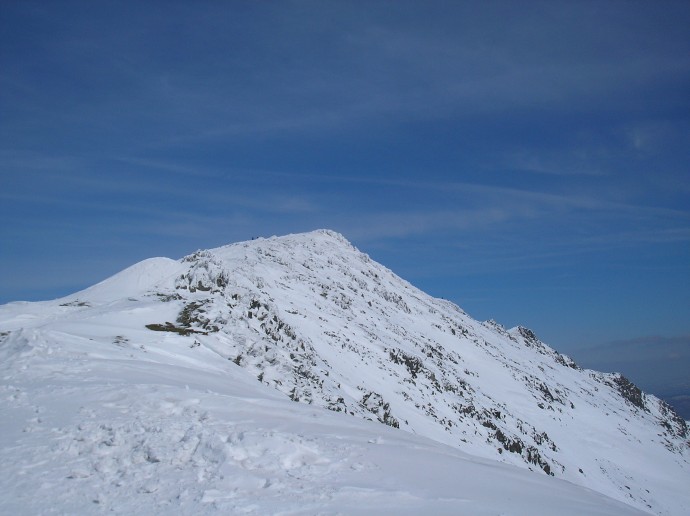 I reached the summit and crowds of people after about an hour and a half and I decided to take a time out and enjoy the views and my sandwiches. Despite the bright sunshine it was still cold and after removing my gloves to eat my lunch my fingers were soon chilled. I set out for the next part of the route by descending back to the finger post and then crossing the railway line to pick up the path heading NW and then W along the Snowdon Ranger path. However, at the foot of Moel Cynghorion I left the path and struck out north up the slope (following a fence line). At the summit (874m) the snow was melting, so it would not take my weight on top making the going a bit slower. The route then follows a track over Foel Goch, Foel Gron and finally Moel Eilio - whilst none of these climbs were particularly steep on long the effort on Snowdon was definitely telling and I was very relived to start the long gradual descent from Eilio back to Llanberis. I arrived at the village at 4.20, so a 5 hour trip. I later checked the time it had taken Neil and I to complete this round in May 2012 and found we had clocked 3 hours 45, but on thta occasion we had not gone to the summit of Snowdon (or had a lunch break) and the going underfoot had been good, so I dont feel it was too far off the pace.

I walked into llanberis tired, but bouyed by a great day in the hills in fantastic weather. In fact I'd caught especially on my arms where i hadn't applied sunscreen (schoolboy error). In fact as I had rolled my sleeves up to the elbow but worn gloves throughout the day I had an unusual white/red/white look on my arms. Still I was able to relax and finish the trip and every visit to Llanberis should; with a huge cup of tea at Pete's Eats

I wondered what you had caught on your arms for a minute there S7....glad it was only sunburn

(you missed a word)

Great report with some belting pics, but man.....so many people out there......can't blame them on such a beautiful day but better they were somewhere else I reckon

Great, did this walk on 7-04 but we started on Moel Elio and ended on Snowdon. Also ended in Pete's

As the young people say S7: "I'm well jel". Are you getting twitchy about the next Jockland trip and think you'll be dragged round by me again??

Yes, I'm not looking forward to getting dragged round by you for another week, so have been getting out for some secret training such as this trip and a route round the Glyderau yesterday http://www.walkhighlands.co.uk/Forum/viewtopic.php?f=16&t=30804. Added to that I've just purchased some lighter-weight boots, not as skimpy as your inov8s, but should be a lot better than my SL diving boots! That said I imagine that the airy exposure on Skye will slow you down - it's hard to make progress when your trying to maintain eight points of contact with the rock