So with this to look forward to plans for a week up north were hatched months ago,Gavin took a week off as well and so did Pat(Morcambe Monkey)and we met up at the campsite in Ullapool on Easter Sunday then set out for a few beers and discuss tactics for the week.The forecast was almost to good to be true so we settled on driving north a bit for the Monday to walk Conival and Ben More Assynt,this was a great day,clear blue skies giving us superb views all round in an area none of us had visited before ,so day one of the week had been a belter,would the good weather continue to Tuesday.
Yep was the answer,Diane had driven up on the Monday night and we deciced to try and boost her Munro count with an attempt on 5 of the western Fannichs,these hills had kicked me when i was down last Easter so this time they were getting it in for a treat

The weather was great again as we set off down to the boat house,somehow missing the track through the forest, then heading over the frozen ground to the start of the steep lower slopes of Meall a' Chrasgaidh,crampons and axes were deployed sooner than we had expected as we hit a few quite steep and icy patches,once at about 600m though the slopes eased off and it was a nice stroll to Munro number one of the day. steeper than it looks as Gav teaches Diane a few moves 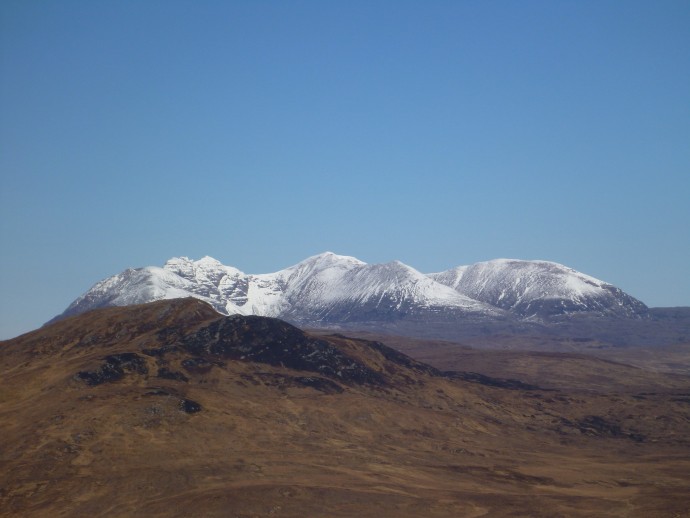 The views from here were superb ,hardly a cloud in the sky so An Teallach ,the rest of the Fannich hills ,Fisherfields and away up to Assynt were gazed on before setting of to Sgurr nan Clach Geala. Gavin on the icy bealach to number 2 This for me was the best hill of the day,great walking down the icy slopes of Chrasgaidh before crossing a big wide icy bealach and then up the steep-ish north side,looking down into the crags and up at the big cornices of Clach Geala.Being Munro 200 for me was also a bonus

so hand shakes all round and we were off towards Sgurr nan Each. Not too much descent and ascent to get to this one so we were on it quite quickly,didn't hang around that long as despite the pics looking like it was nice and warm up there a stiff breeze was still blowing meaning much layering being required. route to Sgurr nan Each Gav,Di and Pat on chilly Sgurr nan Each over to Sgurr Breac

Re traced our steps a bit before descending down to the glen,softer snow here so we were able to lose the crampons for a bit,took a wee break at the shelter next to a big stonebefore deciding we were all fit and able to continue on towards Sgurr Breac. Head down arse up for this climb,about 450 metres we reckoned and we were at the top soon enough. Diane battles on towards Sgurr Breac

A real treat here as what we reckoned to be a sea eagle soared over head ,never even seen a golden eagle on the hills so to see this bad boy was a real hightlight me,Di and Pat on Sgurr Breac

skirting round the side of Tom Coinnich and at last reaching the last munro of the day A'Chailleach. Gav and Di on the last munro of the day

The day so far had been magic but we kind of lost track of time so it was time to head home ,back over Tom Coinnich and down the Druim Reidh was the choice,this was easy enough but when we reached the descent down Leitir Fhearna none of us were too keen to go down there a frozen Loch Toll An Lochain

A quick re think by chief navigator Gav and we were off west to find a safer line down,once we had reached a deer fence that no self respecting deer would even look at

we were sorted.Followed this down and then strolled along the shore of Loch Bhraoin as the sun set and soon we were on the track through the trees and back at the cars. sun goes down over Loch Bhraoin

No hanging about as the race against time was on to make it back to the Seaforth for burger and chips,boots and ruck sacks hastily lobbed into the back of car we sped off to Ullapool and made it with 5 minutes to spare for a well earned dinner a couple of pints

Probably my joint best day ever on the hills this,Pat and Diane done really well on a tough hike,Gavin made it look easy as usual,so cheers to them for the company and laughs.

Next day we took it easy with a stroll up Am Faochagach,Thursday a day off ,driving round to Kinlochewe and meeting some Walkhighlanders on the Spring meet,Friday another superb day on thehills with Gav,Pat and Kev before more drinks at night then home Saturday for rest

Don't get much better than that

Great report and pics there pigeon

snow is fairly disappearing now eh .Soon get the summer boots on again

As always a great report with cracking pics, well done on getting past 200, not many to go now

Looked at your 3 reports Looks like you a good week weather wise cracking photos some views . Hope its like that in may when I go up

Congratulations on the 200, pigeon

and what a way to do it ! Makes all the difference when you get good weather, especially as good as this

Quality once again pigeon and the gang stunning views and well done on cracking the 200 mark.

A double ton, well done that man- not be long now

A rather nice way to do it as well

great report pigeon. this has to be one of my favourite days on the hills and i learnt so much about birds too!!!

Good to meet you albeit very briefly.
Cracking day you had.

That looked pretty much perfect

Congratulations on the 200 and good to meet you on the Friday evening.

Quality stuff there, in what looks like superb weather conditions.

a few of my pics not sure why pat is upside down!

Great report & pics there Pigeon on what certainly was an epic day & it was some way to reach your 200 too. Cheers for a cracking week of mountains,beer & laughs.

sharkey83 wrote:not sure why pat is upside down!

Diane,that really has made me laugh,i felt like i was upside down at the end of the walk.

Brilliant stuff pigeon. Like others have said, good to meet you on Friday evening, albeit all too briefly, but another time!