To paraphrase Jimmy Greaves, hillwalking's a funny old game eh? It's amazing how quickly the weather switch can be flicked and a day on the hills transforms from a pleasant high-level stroll with fantastic views into a claggy slog in zero visibility. After a mouthwatering introduction into walking in Torridon we were back for another nibble on Beinn Liath Mhor and Sgurr Ruadh.

Slightly overcast skies gave way to blue as we made our way out of the forest and up the path towards Coire Lair. Eyes were drawn to the impressive-looking Fuar Tholl on the left as we gained height. Hadn't read many reports linking all three peaks but it certainly looked inviting. The route up to Beinn Liath Mhor is simple and enjoyable: a path winds up before giving way to a boulder field that takes you on to the main ridge. up over the boulders... First stop off point on the ridge is the cairn at 878m for a rest and a chance to catch up with the views. Looking over to Beinn Eighe and Liathach you can almost imagine one huge ridge connecting all the tops of those amazing mountains. What an epic traverse that would be! The weather was fine at this point although there were some darkening clouds on the northern horizon so we did not tarry long and made our way along the wide ridge for 1.2miles to the peak of Beinn Liath Mhor. After a spot of lunch we set off for the bealach between the two munros where we would begin our ascent of Sgurr Ruadh. We started our descent with a bumslide race which I lost. Views were still looking good down Loch Torridon and beyond at this point and it was here that we were treated to the indescribably fabulous sight of a golden eagle swooping beneath us and gliding off in the direction of Liathach. Absolutely magnificent moment which did take away the power of speech for a while. The mountains have a habit of making you feel small at times. 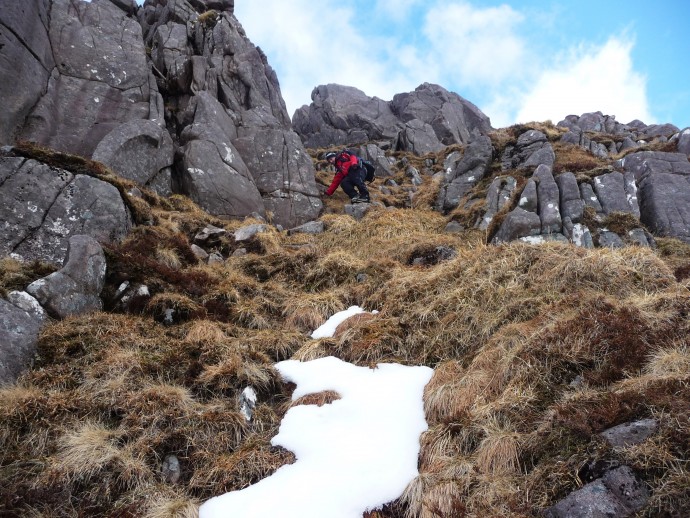 After picking the way steeply down a rockier section, the final descent to the bealach needs a bit of care: veering too far to the right would mean a sudden exit off of a sandstone cliff. view ahead to sgurr ruadh back along the ridge The weather started to turn as we ascended the initial slopes of Sgurr Ruadh. Snow flurries gathered strength and took away the views of the great Torridon giants we had been enjoying so much.
We decided to take a wee detour over an ice-covered section of rock on the way up to get a flavour of ice climbing. Really enjoyed the sensation of kicking in with crampons and axe on a totally frozen surface. The section up to the peak of Sgurr Ruadh is fairly steep and in the deep snow it was strength-sapping too. Views were being increasingly reduced and it was with relief that we plonked ourselves down on the cairn, which looked like a frozen hot tub, for a breather.
A quick descent out of the clag presented us with a new view of Fuar Tholl looking more mean and menacing...and tempting. This is definitely another peak now added to the list of must-dos. On the way down to the path we considered various future lines of ascent up snowy gullies: a real sexy beast this one. We met a hardy pair of mountain bikers who were heading up to the head of the glen. They figured they would be there in half an hour. For us, it was at least an hour back down, through the forest, past the tiny Acnashellach train station and back to the car. Another excellent day out in a very special area.

Excellent report and pictures. You had my walk in reverse for these two, as I saw nout from BLM and had all the views on SR

But that's the great British weather for you I guess

Cheers PeteR, a really enjoyable walk this and the mixed weather gave it a two walks for the price of one feel

That looks hard work in the snow!