Its to be a cracking day with sunshine symbols all over the North West Highlands.

I can’t afford to venture too far for one day, but likewise I think its wise to avoid the snow filled coires of the Glen Etive Munro’s that I’ve still to do. So, the Aonachs it is!

I was hoping to leave at 0600, but the alarm went off and the snooze button too tempting: another 15 minutes….. After making breakfast and lunch I hoofed it down the two flights of stairs clattering poles and ice axe off every wall and probably disturbing all my neighbours! Woops! Didn’t they know: it’s sunny outside and time to get up!

It was a good drive to Fort William, though I did get stuck behind every lorry doing 40mph and why is it always at the twisty, bendy and narrow sections of road?! I arrived at the end of Glen Nevis and ate what should have been crunchy oats in yogurt, but was now soggy. Mmmm….. yuck! Won’t make that mistake again.

I quickly geared up and scooted off along the track to Glen Nevis at 0910. I’ve not been up here since about 2002 and the track is not as I remember. I catch up with two old guys : it’s none other than the old chap I met whilst out with Foggie and Polly at Gulvain last Friday.

I had a quick blether with them, and off again. The track is easy to follow out past the steel bridge, the falls, round the corner and finally a wee wooden bridge and a ruin.

I was planning to climb Sgurr a Bhuic, then ascend the top and onto the summit of Aonach Beag, but there was unexpected cloud on the summit and me not being a very good navigator woosed out of doing this, so I decided to just wander up towards the ridge as was a wee family that I met: Sheila, Jack (15) and Anna (10). Oh and Max the daft dog who insisted on sledging on his belly.

I sort of gate-crashed their party, but I don’t think they minded.

They were all really nice and we ambled our way up across the river, through the boulders and crags and up the steep section of slushy snow to the ridge. Wee Anna was doing so well, but this was the point where they needed a snack and I continued alone (for the time being). The views were amazing! I was going to be in for a treat when I reached the summit. I continued up the snow-packed ridge of Aonach Beag and the summit just went on and on and on. Where is it?!

Finally! No cairn, no nothing…. I am here. First munro of the day under my belt, it’s time to enjoy the views, catch my breath and have a much needed sandwich. Check out the cornicing! Looking towards Aonach Mor

Jack appeared with Max and I told him he might want to hang onto the dog as the cornices were unbelievable. He waited til his Mum arrived with the lead and ice-axed him into the snow. The kids were now allowed their chocolate and we sat and drank in the views together. There wasn’t a drop of wind and it was pretty warm, but I was starting to get cold and it was time for me to attack the second munro of the day, so Cheerio again and I am descending Beag. It is much steeper than I had anticipated and the snow is much icier: time to put the crampons on and get the axe out. I didn’t fancy taking a tumble off here!

Safely at the bealach, I have a quick glance at what will be my descent route. It looks steep, but perfectly do-able, though I can only see the start off it....

Up onto Aonach Mor, the easiest part of the day and many more pictures to be taken. The Carn Mor Dearg arête just looks incredible! 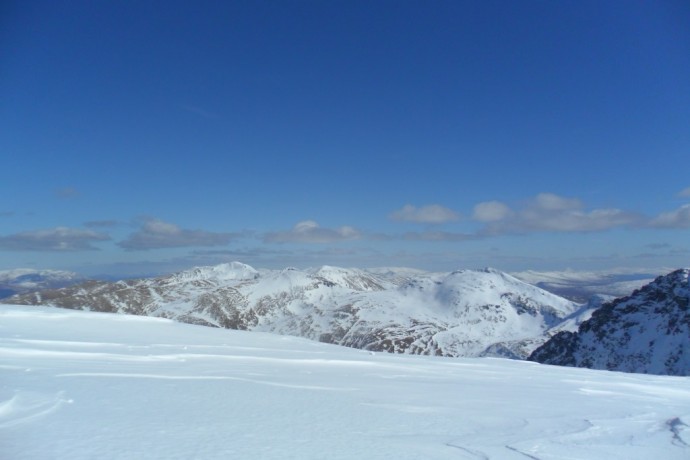 Close up of Aonach Beag from the shoulder of Aonach Mor Back at the bealach its time to descend and I am not looking forward to this.

There is a set of footprints, so I start off by following them. I haven’t gone very far when I feel very uncomfortable.

This snow is not good. It's like slush. I still have the crampons on and I am not sure if they are helping or hindering. I get further down and look back up thinking I should have gone back up Aonach Beag and descended from there. Hindsight is a great thing, but once committed, that was me: one step/slide at a time. It was physically and mentally demanding as I had to ensure my ice axe would hold if I slipped, which was with almost every step I took. It was horrendous. I did have a moment where I started to get upset, but I snapped myself out of it and took control. I decided it wouldn’t matter how long it took as long as I got down safely and that would be one step at a time. I found a safe spot half way down and took my crampons off – they were indeed hindering me.

It looked like someone had slid down part of this – surely not!? It was much too steep and there were lots of dangers one would most certainly hit on the way down.

I was almost down. I had one last tricky section to complete and I would be back on safer ground and an easy walk out. How am I going to get down this steep little crag, which is covered in snow and thick ice?! There seems to be lumps of snow coming from somewhere and falling down the crag…. I think its just melting off the wee waterfall on the crag…. I hope so.

The snow behind me better not avalanche – not now! I am up and down, backwards and forwards, sliding, scrambling and grabbing hold of tufts of grass and finally I am down. That over, I had a wee play on the next section which was quite safe, but steep enough to generate a bit of speed to practise some ice axe arrest.

It took me around 2 hours just to descend from the bealach into the glen and I would not recommend it! I found the path easily enough and walked out. It is a lovely glen and I was thinking about my day when there was this almighty BANG from my right and up on Ben Nevis. I leapt out of my skin, checking for debris, but nothing was coming my way thankfully. Footprints in the snow

Easy toddle out from here I hoofed it back to the car where I met the wee family and Max. They had just made it back after messing about digging a hole on the summit of Aonach Beag in search of solid ground.

Great day, superb weather and the most amazing views I have ever seen. 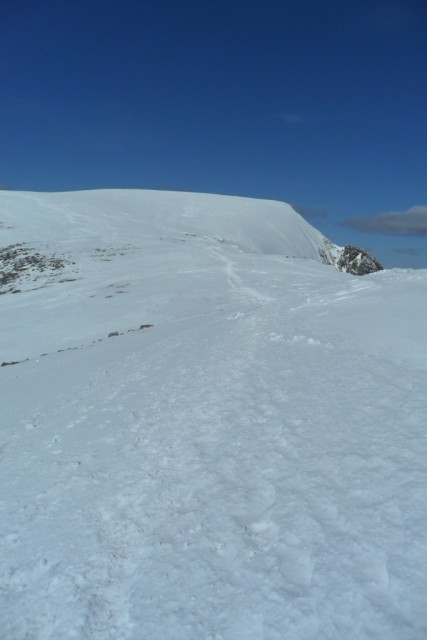 What fantastic photos Dawn, glad you made it back safely, that was a big boulder you encountered, just as well it was ahead of you!

mrssanta wrote:What fantastic photos Dawn, glad you made it back safely, that was a big boulder you encountered, just as well it was ahead of you!

Thanks Mrssanta - it was a superb day! But the two hours it took me to descend to the valley from the bealach was scary and I wouldn't advise anyone to descend from here in the current conditions. I was gad to make it down safely too

Wow, what a great day out! Some fantastic photos, beautiful views

So glad you got down safely, Dawn

SusieThePensioner wrote:Wow, what a great day out! Some fantastic photos, beautiful views

So glad you got down safely, Dawn

Thanks scotjamie - it was very impressive! And the closest I have got to Ben Nevis too. It was good to see what I will be letting myself in for in the future

Havnt being up there but looked great. Best to take your time and get down safely. What was the big bang.

A grand day out!

Hi Dawn... looks stunning up there glad you made it down ok take your time thats the way to go.

Nice one dawn looks fab. Glad to see you did not cheat and use the cable car as some unscrupulous peeps on this site have done. scandalous if you ask me

I did these a few years back and had similar conditions by the sound of it. Just remember standing on AM and soaking up the crisp snow on CMD

Had the summit all to myself too

Glad you made it down safely too. Certainly had a few of those experiences myself in the past

Better to take your time and get down safely I say.

The day could not have been any better, apart from the descent. These experiences, whilst scary at the time, can be good experience. Its the most action my ice axe has seen! And was good practice for me.

Johnny, the cable car is cheating in my book!