This was my first outing of 2013; my lack of winter skills and equipment coupled with the late onset of winter had led to an almost torturous 4 months of enforced hibernation since my last expedition up Buachaille Etive Mor back in November.

The problem with being a fair weather walker (and a relatively novice one at that) is that I know the hills are out of bounds when clad in deep snow and ice, but there comes that tipping point when the snow starts to disappear and the weather begins to warm, but I didn't necessarily yet have the knowledge to know what would and wouldn't be possible. While fully cognisant of the very real danger of heading out unprepared and having read with the interest the contrasting views on some threads on here such as the “when to say something” discussion, I came to the conclusion that it's difficult to say for sure what the hard and fast limits of any individuals do-ability is until you've had at least some experience of those kind of conditions.

With this in mind, I felt I couldn't let the Easter holiday weekend go without at least some sort venture into our wonderful countryside. My initial hope was to tackle something in the east – tieing in with a visit to my family in Perthshire. Those plans were swiftly quashed when a wander around the Lairds loch near Tullybachart, en route to Dundee, revealed just how much snow had fallen over the Mounth. I needed to find something that was both gentle in terms of ascent and that wasn't completely submerged in the white stuff. Looking towards the more favourable weather conditions in the west, I settled on Ben Challum near Crianlarich – something I could fit into a rather convoluted drive back to Edinburgh. My plan was strict – to stroll up the hillside as far as I felt safe enough to do so, but as soon as I encountered any deep or perilously slippy snow to have the discipline to turn back - something I felt confident I could do given that I've yet to be completely consumed by the bagging bug.

I set off characteristically early from Coupar Angus a little after 6am, excited at the prospect of both my first walk of 2013 and, I had realised, possibly my first solo munro outing. I was without my partner in crime Maggie – my little Jack Russell was still in Edinburgh keeping Becca company whose work didn't allow her to join me over the weekend. I made good progress past Perth and Crieff but felt a little trepidation as I rounded Loch Earn and saw the great bulk of Ben Vorlich clothed in white, followed by an even whiter Tarmachan ridge and Lawers range as I rounded the A85 towards Crianlarich.

I pulled into the layby, only the second car to arrive, and set off dead on 8 o'clock – a glance upwards toward Ben Challum showed that there was a fair bit of snow but much seemed to be confined to the summit, with patches appearing far more sporadic further down. The conditions were good with only a little cold wind beginning to break up the early morning cloud as I set off purposefully down the track to wards the foot of the long slog up the hill.

In the first part of the walk I was too busy admiring the views up and down the glen to realise that I stumbled a little off the planned path and instead found my way into the maze of a sheep fank. I quickly back tracked, spotting the beautiful and rather picturesque graveyard noted in the walk description, before heading upto and over the level crossing. As the plod – and, after a long winter of too much eating and not enough movement this was most certainly nothing faster than a determined plod!

- continued up the hill, the wind chill increased but so did the marvellous views behind: Ben Lui looked majestic with its grand north eastern corrie holding a ridiculous amount of snow. Further east, Ben More and Stob Binnein dominated the view – again clad in much more snow than I was tackling on Ben Challum but notably, from the dazzling reflection of the morning sun, those relentless steep slopes facing the road also appeared to be covered in ice. 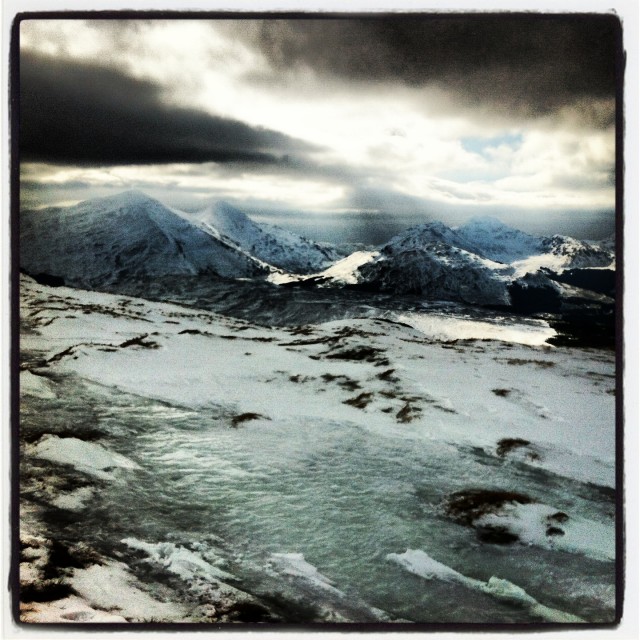 There isn't a great deal more to be written about the ascent – the slog up toward the south top was relatively straightforward – most of the snow patches were easily avoidable (though I did jump into a few up to my waist for nothing more than the experience). The cold also proved to be something of an unexpected ally – those lower slopes would have been unpleasantly boggy without the comforting firmness of frozen mud. The final pull up to the slightly better defined ridge of the south top had my woefully unfit body screaming but the ever improving views, both back to the aforementioned (including the surprisingly impressive northern corrie of Cruach Ardrain) and now across to the Beinn Dorain group, were stunning. I didn't linger, for the icy wind was stingingly cold across my face and headed swiftly off across the snow towards the true summit, keeping slightly west to avoid the strange cleft in the ridge. 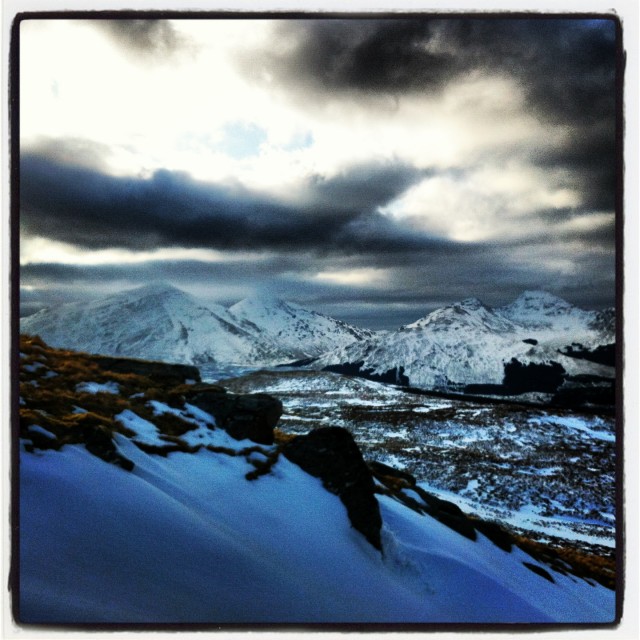 That cleft offered some welcome shelter from the wind – here I met another walker who was waiting here while his two companions made the dash to the summit and back, having gone as far as he wanted to. The slightly narrowed ridge followed by the final, steepish stretch up to the summit was almost entirely covered in the white stuff – this gave me pause for thought. I tested some the of snow towards the ridge and found it both firm (but not crusty) and sure. Content, I quickly pushed up the last section of ascent, briefly stopping to chat to the two walkers who were descending towards their companion, before reaching the summit. The very top was shrouded in a haze like cloud which, in conjunction with the biting wind, felt like walking into a cloud of fine frost. Without the benefit of the views which had been excellent until now, the summit held no further reward and I quickly descended, keeping well away from any cornicing. The rest of the descent was straightforward and quick – I passed the three walkers I'd bumped into earlier along with a few other groups who were straining with the uphill slog though, unlike me, had half a chance of a clear summit with the ever improving weather. The views, again predominantly of the stunning Crianlarich hills, were fantastic – though I'll reserve attempting any of those until the summer. Having not stopped for food or rest at the summit owing to the Nordic winds, my need to refuel motivated what must be my quickest ever descent and I was back at the car exactly 4 hours after having set off! Crianlarich Hills in the Sun My tenth munro and first solo outing had been an absolute pleasure. Having not been out in the snow I can now fully appreciate the character and charm it lends to what might otherwise be a fairly unexciting climb. The depth and cover I had to contend with here wasn't much but it was still probably my absolute limit. What it has given me was enough excitement to know that an ice axe and crampons are certainly going to be on the shopping list for next winter!

Four hours is impressive, especially lugging an easel and oil paints with you.

Some very atmospheric photos to go with the report too

As a predominantly lone walker I've often had to consider what is, and what isn't, sensible insofar as routes and conditions are concerned. For me experience has been the key, starting off as you have with something I felt comfortable with and building from there. Regardless of the number of hills I climb though the one the one thing I will always keep in mind is that the mountains are king and so I give them the respect they require.

I would echo Pete's comments.
When walking alone, you are perhaps more conscious of the risks etc as it's only you to get you out of there.
Selfishly, you also don't have to worry about anyone else.

But having spent time with others on the hills, there are obvious benefits.

I've been missing your fab reports

Pete & Kev - helpful and encouraging - thank you to you both!