I had all sorts of weird and wonderful plans for arriving at the Kinlochewe meet - either by bike from Inverness or walking over some hills from Achnashellach. Sadly fate intervened and I ended up in the south of England on the Thursday for my gran's funeral. Arriving back in Inverness at Friday lunchtime, I had a few hours to pack up before catching the (extremely rare) bus out to Kinlochewe. The driver dropped me right at Taagan campsite and I pitched up in the stunning evening sunshine, before strolling back to the pub to meet everyone and have a pint or 4.

I was reasonably restrained in the pub, and the next day decided to do Ruadh-stac Beag and Meall a Ghiuthais with Graeme and Charlie. A better forecast may have tempted me up Slioch, and in the event, the weather earlier in the day was much better than expected. I have posted reports for both of these hills before so I won't dwell too much on the detail.

RSB and MaG.gpx Open full screen  NB: Walkhighlands is not responsible for the accuracy of gpx files in users posts
Creag Dhubh of Beinn Eighe: 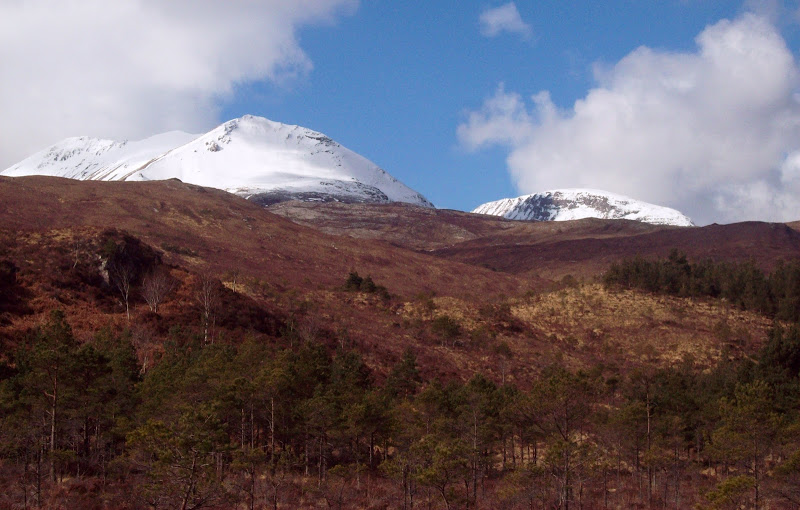 A slight confusion over which carpark to meet at, and we were on our way shortly before 11am - with all that daylight, why get up earlier? We followed nature trails and a stalker's path for some time before contouring up the side of Coire an Tuill Ban. The cloud levels were ever changing, but overall the views were good, and I was chuffed to get decent weather for a second time on this hill.

Back to Kinlochewe, Fannaichs and Fionn Bheinn in the background: 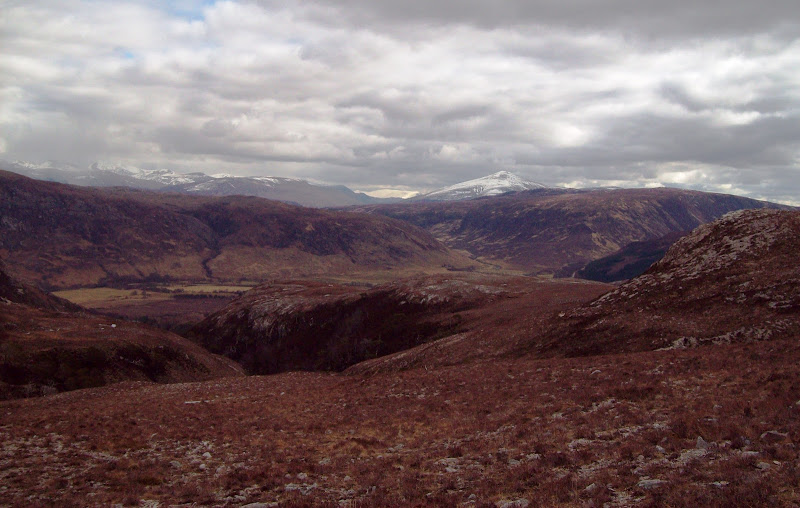 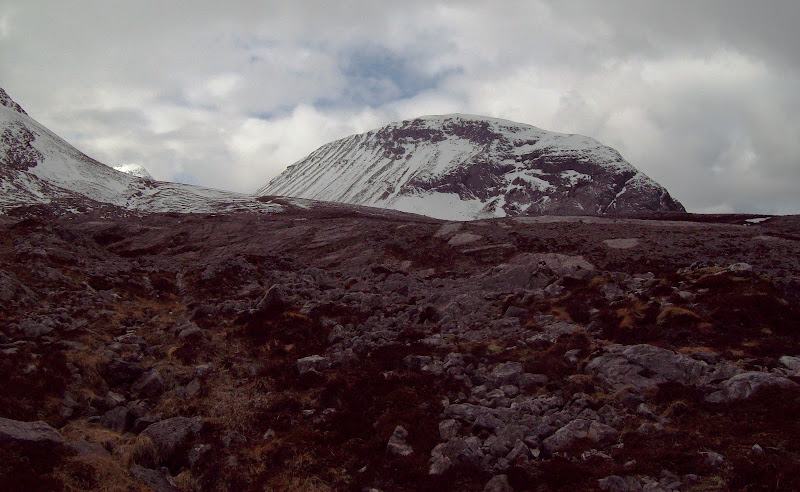 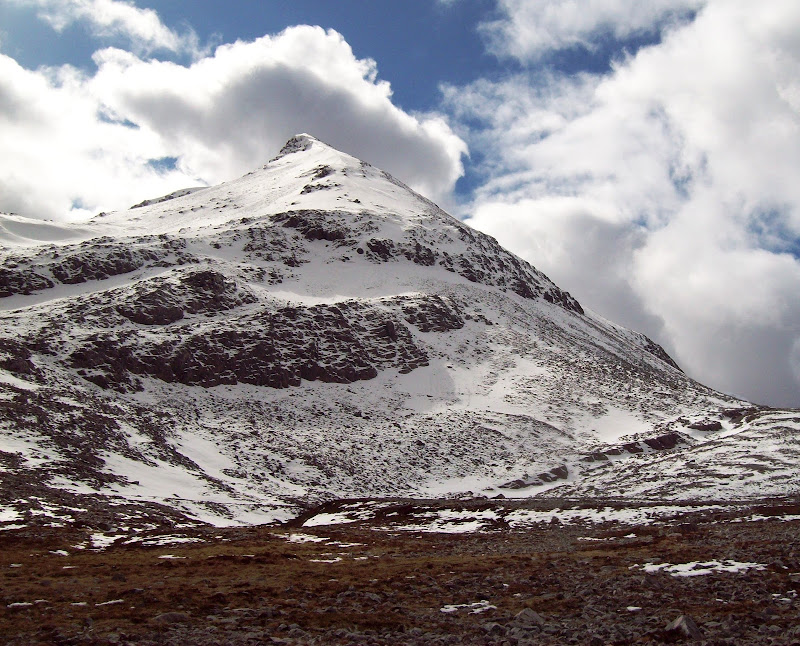 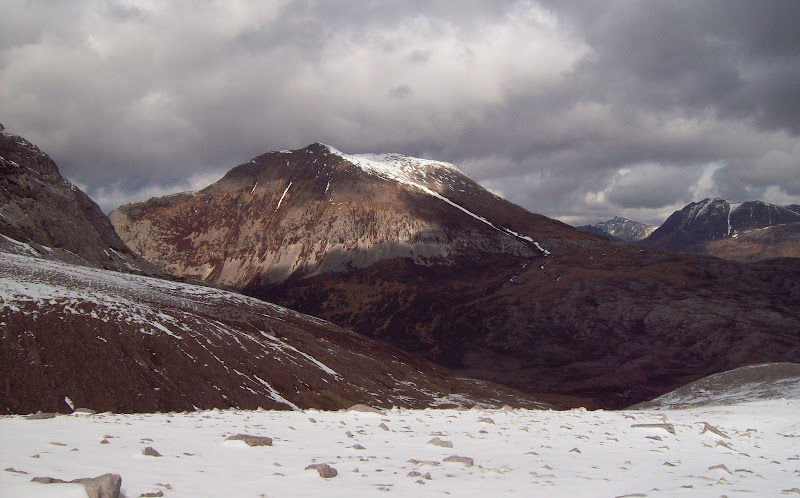 While the corrie was well plastered in snow, the final ridge onto the summit was almost bare. Luckily the scree and rocks were much more stable than expected, and while steep, it was a nice enough ascent. 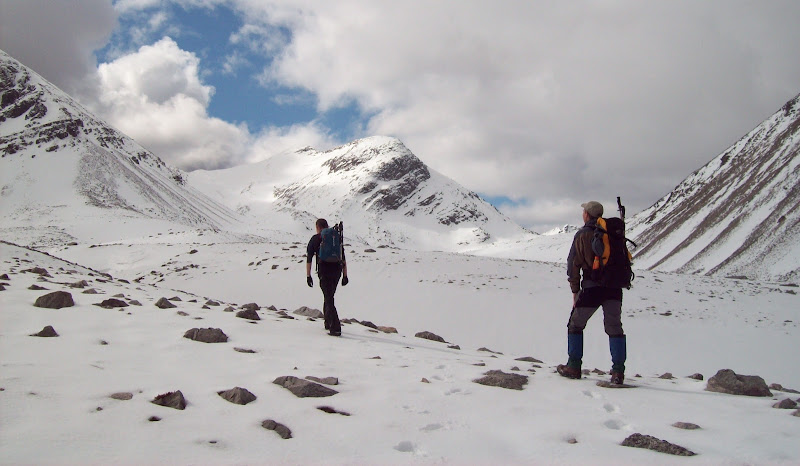 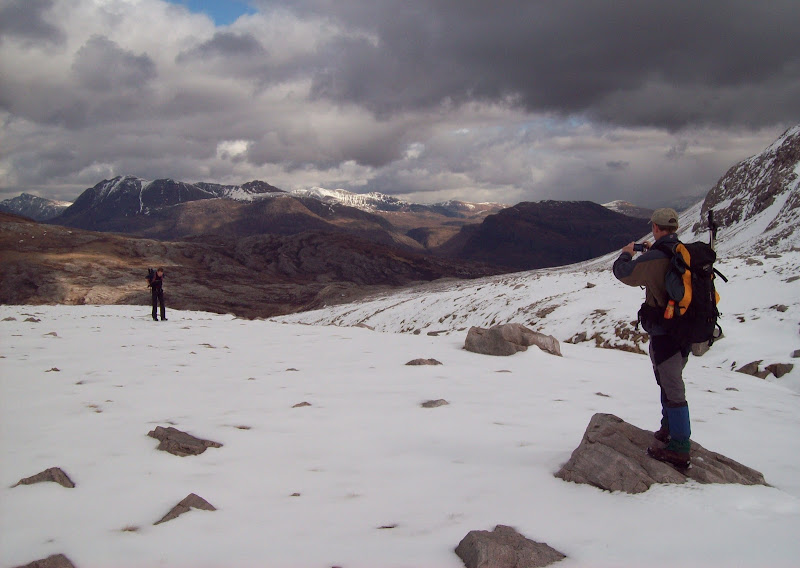 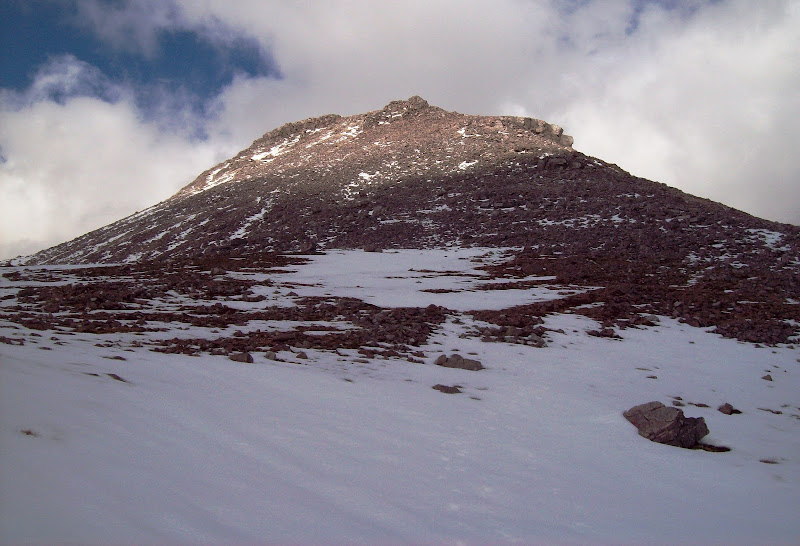 Impressive views all around, particularly of Liathach. I don't think Graeme and Charlie were too disappointed, despite this playing second fiddle to the round of Coire Lair they had done yesterday in perfect conditions. 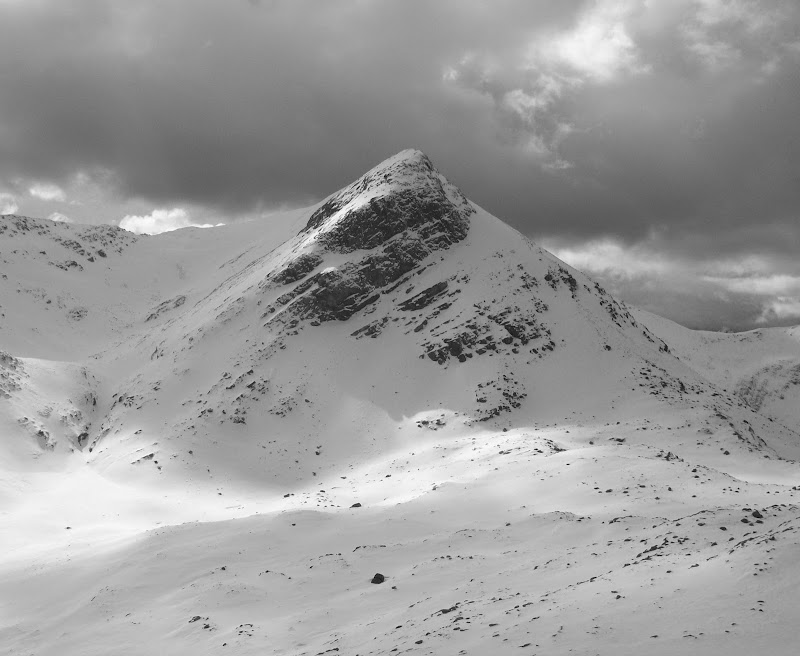 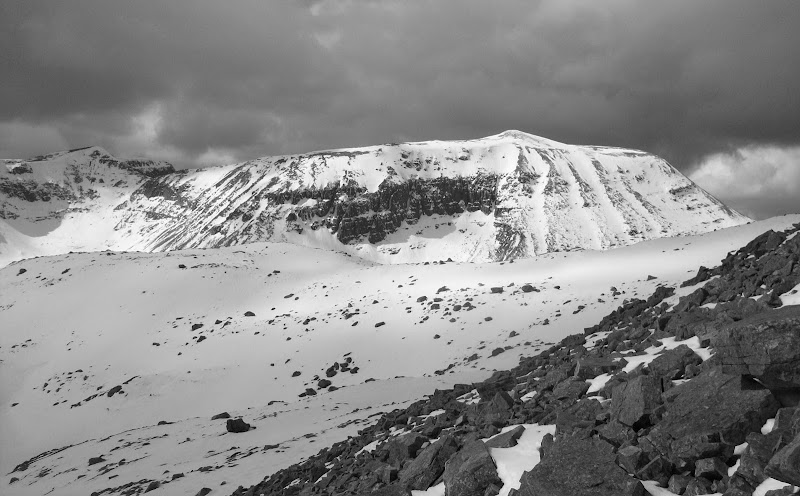 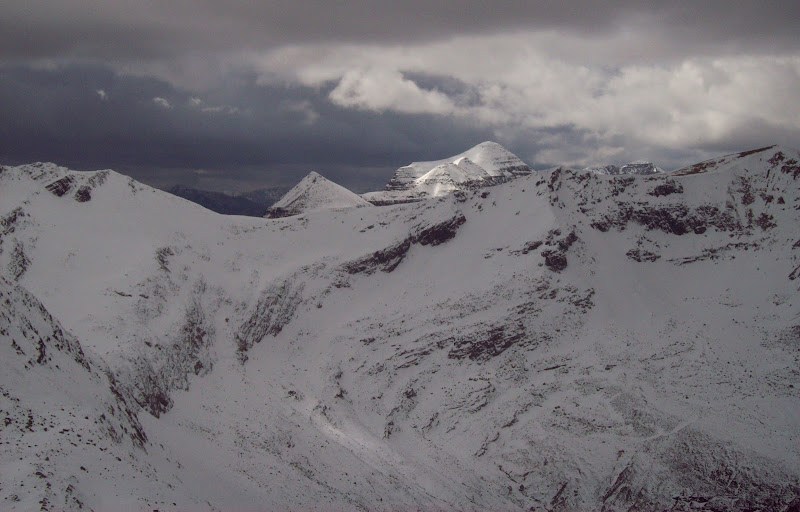 Graeme near the summit: 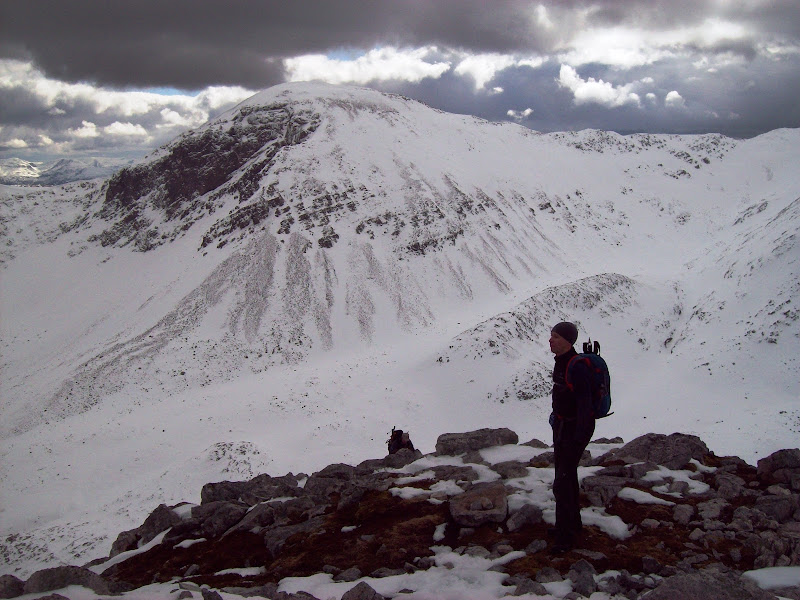 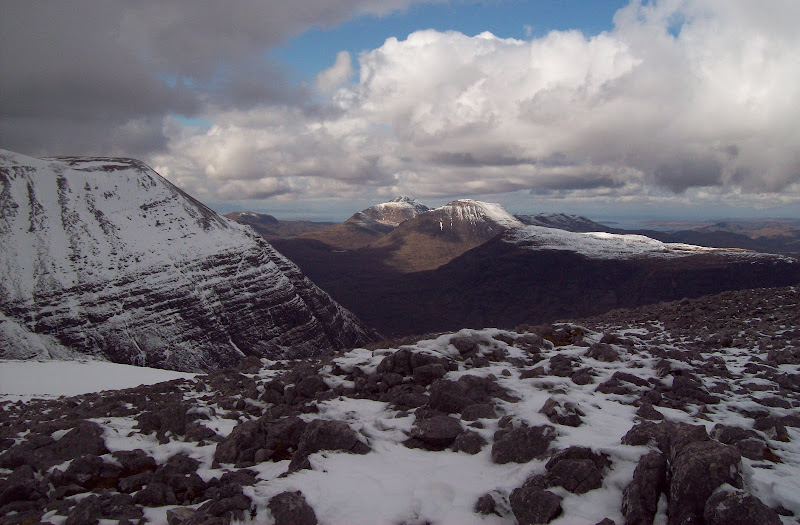 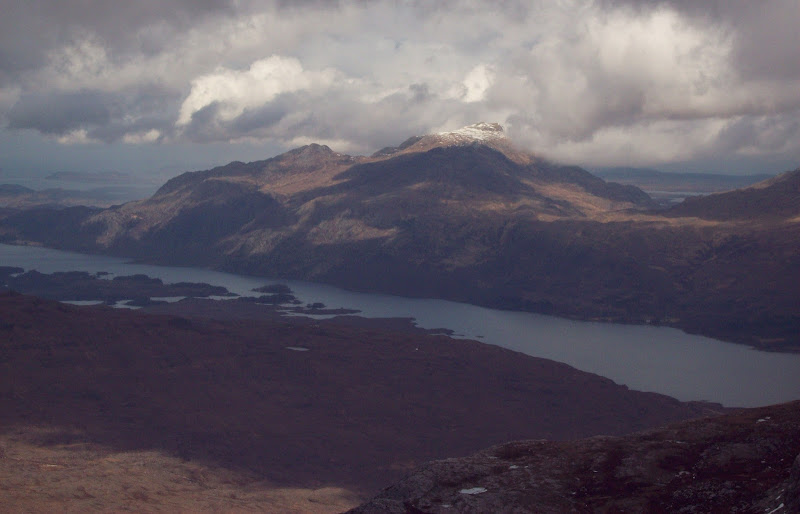 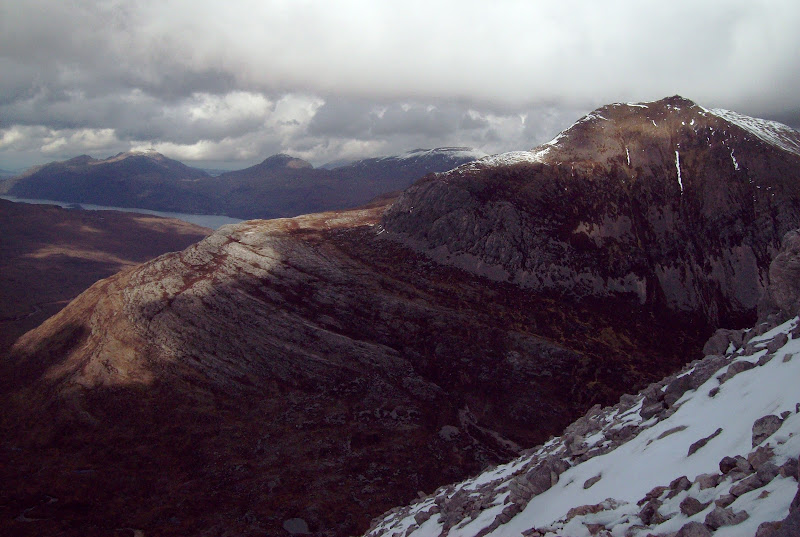 I had thought the best way onto Meall a Ghiuthais would be a retracing of our steps, but luckily Graeme was more adventurous and took us down the NW ridge towards Glen Grudie. This was rough as hell and the steepest bit had snow of just about every possible consistency on it, but it took us to a great spot with an unexplored aspect of Meall a Ghiuthais ahead. This looked pretty intimidating from lower down, but in reality the climb back up had some great walking across vast slabs of rock. 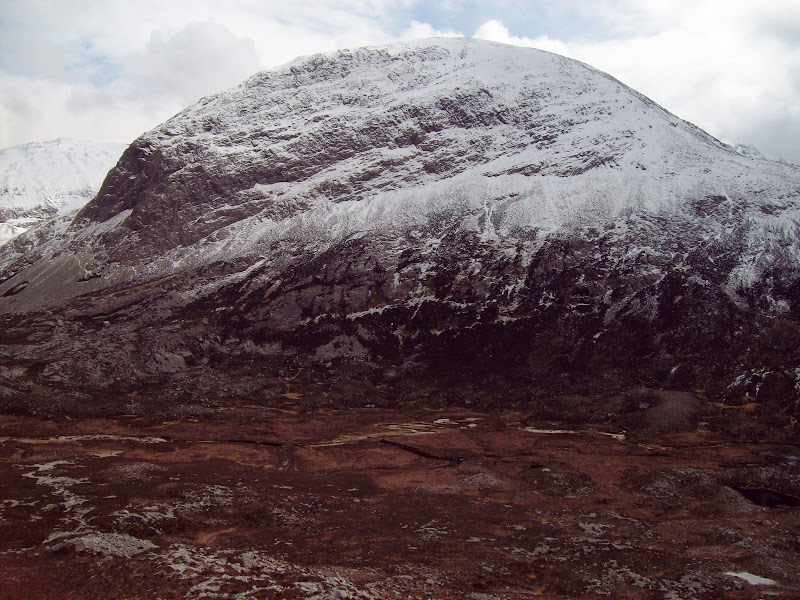 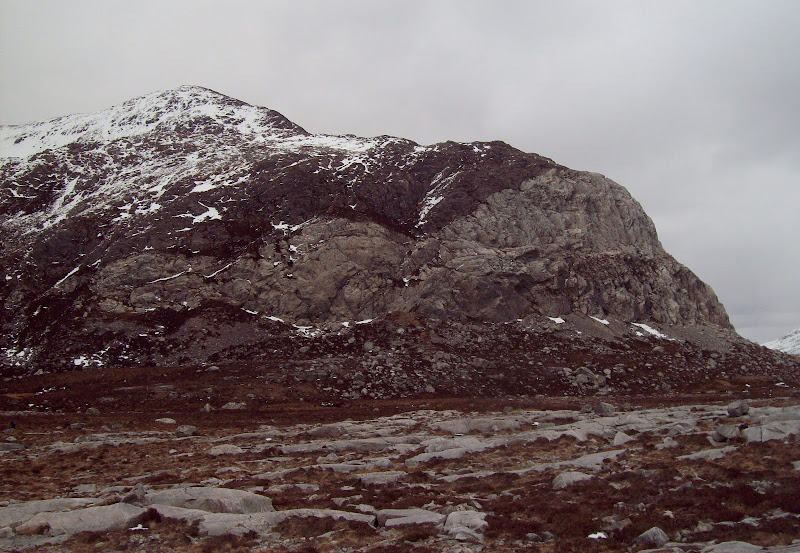 We spiralled round the hill to avoid some of the steepess, but unfortunately the cloud moved in just as we hit the snowline again. The snow was pretty crappy, being soft and lying over ankle-trapping boulders. The curse of Meall a Ghiuthais was striking again! This was my third ascent, again with no views. I went to the wrong summit on the first occasion, so knew not to be fooled by the first cairn this time. At least it was less windy than when I had been here with HighlandSC a couple of years earlier!

Loch Maree again before the cloud moved in: 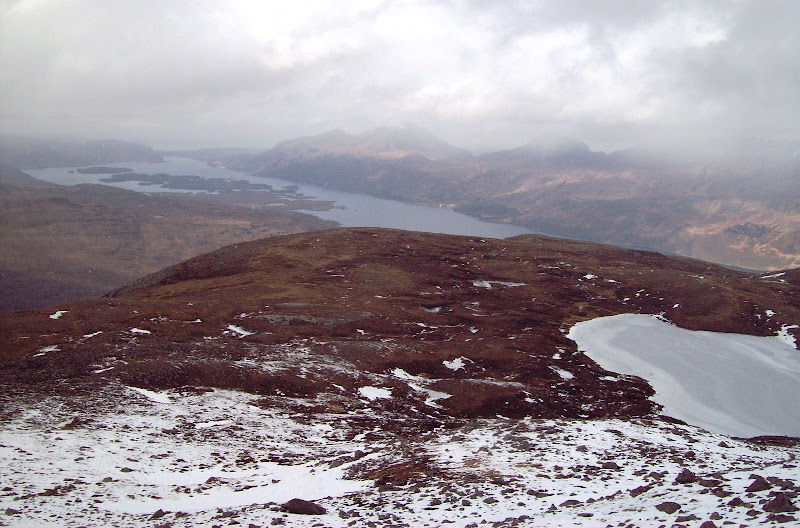 Summit pose on Meall a Ghiuthais: 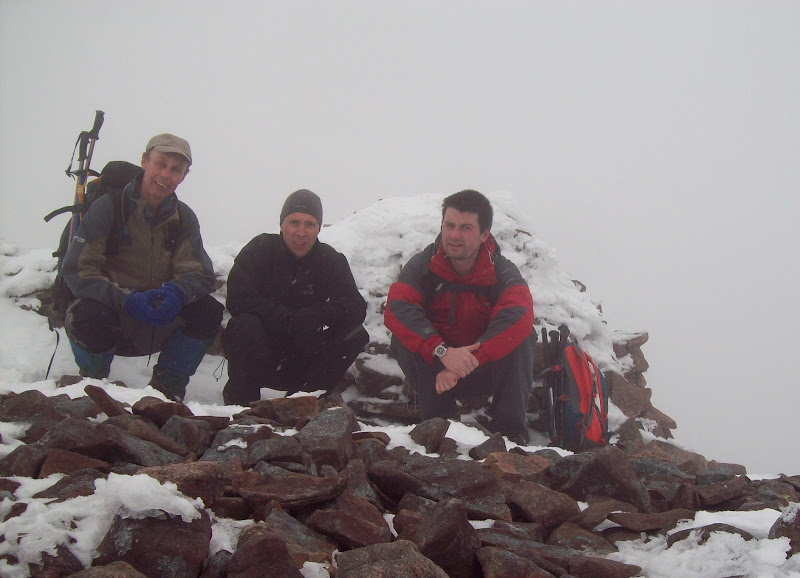 We retraced steps a short way down from the top before striking off SE, and striking gold. A burn in a shallow hollow on this side of the hill held snow all the way down to about 500m, despite the rest of the hillside being stripped bare. This allowed a rapid bumslide/footskiing descent most of the way to the stalker's path out

. As punishment for that, the stalker's path seemed to have doubled in length while we were away, and it was a relief to finally reach the carpark.

A great day out, and quite hard going in places - cheers to Graeme and Charlie for the company and route choice

. And of course cheers to everyone else for making it a great meet - certainly brings the life into what would have been an empty bar in the Kinlochewe hotel otherwise!

Hi Malky,
Enjoyed reading your report of our day out together. You managed to get some great mountain shots and with atmosphere. The highlight was coming down that snow line. That was my fastest ever descent of a mountain except maybe by cable car. Hopefully we'll meet again sometime. Charlie.

Nice photos and an interesting route for these two , yet another 'must do ' walk in this area . Myself and Ritchie walked as far as the Bealach on the same day , we discussed what a nice route that snow filled gully looked ! Nice route malky,as Gavin has said another one added to my ever expanding list

Sorry to read of your gran's passing, Malky.
Good to see you albeit briefly.

Another fine, detailed report to add to the 'refer back to later' list!

Nice one Malky - was good to meet. Vey enjoyable report on hills I know little about.

I was really interested to read your report and some excellent photos, as usual

I managed to do the Woodland Trail (1.5kms) a couple of years ago and that's quite a long way
for me!!

Condolences about your Gran; a sad time.

Just back from Barca after a few days of not thinking about hills at all, and this brings back great memories of last weekend. That footskiing descent down the stream bed was awesome! Will get my TR up sometime in the week. Glad to hear you liked the "adventurous" descent off RSB!

Well done you guys! That was an impressive effort ....a weekend to remember for a long time....good for the soul

SusieThePensioner wrote:I managed to do the Woodland Trail (1.5kms) a couple of years ago and that's quite a long way for me!!

I'd never noticed these before - they are quite useful for getting between the campsite and the village. Something new every time

Good to meet the rest of you for the first or second time (dogplodder aside, although it wouldn't surprise me if you do dog walkies along the path behind my house, as I seem to recall you live out on the Culloden/Westhill side of town).