Posse up on Beinn Alligin

Posse up on Beinn Alligin


Kinlochewe day 3 for me. Having arrived Thursday evening to rendez-vous with a handful of other early birds, Friday was Beinn Liath Mhor - Sgorr Ruadh bailed on due to surprisingly non-beer related malais.
After toiling on Beinn Liath Mhor I'd earmarked a low level long distance with Gable Gable End.

However, a Friday spent nursing 4 pints and 2 tiny drams followed by a good night's rest had me electing instead to join the squad heading for Beinn Alligin. I'd hoped for the weekend to get one of the big 3 up here done, so this'd satisfy that desire.

To the car park it was. Myself, Caeser, Bod and Valerie (Ritchie was having an away day with Gavin99), Tomsie, Jupe1407, Morecambe Monkey, Meatball and Ken.

Forecast of 30% cloud-free tops was lookingon the pessimistic side. Blue skies and fluffy clouds in the sky for a promising start. Jackets were soon removed. Pressed on along the pleasent path towards what looked like an uninvitingly steep climb. Fine views to be had, nice to see Liathach from the other side. Easy stuff and view savouring over, it was time to blitz that steep but thankfully shorter than expected ascent then time to hit the horns. Skies darkening, but cloud still far above us. (for now anyway). 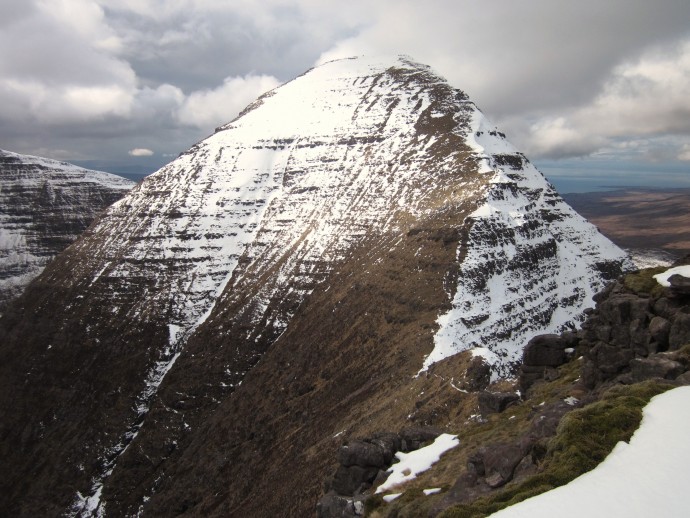 Monkeying down off the horns.

Well the horns safely conquered, cloud hanging lower, time to make what looked liked another long steep pull up to Munro number 1. Seemed strange to have done so much already without hitting a summit. "Looking back, over my shoulder" (sing it, you know you want to) Ken ascends into the cloud and snow

Once more it was an ascent that was far less taxing and unenjoyable than it initially looked and soon enough Sgurr Mor's top was reached. Cloud, bit of a wind and snow meant we didn't hang around here too long. A few pics then a descent, with the poor visibility it was important to bear in mind the presence of Eag Dubh. Chanced upon another couple of hardy souls enjoying Alligin's delights. In trainers and trackies! "Hmmmm" I think was the collective thought. I didn't speak to them myself but others in the group did. No horns for them jut the two Munros clockwise then back down. Would we see them again?

Continuing our descent we slipped below cloud level again and almost managed to get a clear look at Sgurr Mor as the cloud blew away off it briefly. The cloud came back as quick as it went over Sgurr Mor so it was onwards and upwards towards Tom na Gruigaich. Delayed by a painful occurrence of cramp(and for once it wasn't me!) we were relieved to see two figures coming back down from Sgurr Mor towards us. It was the trainer boys, who soon passed us and were on their way back down.

Summit number two reached and it was time to break out the flapjacks. I should have broken out my camera as well. I didn't realise until we were halfway down that I'd not even grabbed a pic of the summit! Doh!

I know others did though, so I'll be thieving.

Horns done, both Munros bagged and it was time to head down towards Coire nan Laogh. Down and down through the thinning snow until the path revealed itself and we bimbled down back towards the cars. last of the snow. Back up into the corrie

An amble back down one of those paths that's generally fine but in places has steps bigger than you'd like for weary legs. Some boggier bits too. A burst of energy had me almost skipping the last wee bit back to the car park before we decamped, some of us to the Torridon Inn for eats before the evening's fun began, some straight back to KInlochewe. I certainly enjoyed my burger at the Torridon Inn, washed down with a pint of The Torrid One.

A grand day out that had me glad I hadn't settled for a low level walk. Fine company on a fine mountain.

Just need to work out when I can squeeze in return journeys for Liathach and Beinn Eighe now.

Aye a good report Nathan,
I kinda wish I was there, looks very dramatic in places. A wee bit better than a low level walk, eh!!!. Congrats to all.

Great description and some moody misty photos Nathan - serves as a good taster to make sure that a return is planned.

Great report and photos! You were really lucky to get the horns done before the cloud came down

Excellent report Nathan, which saves me the bother of typing one up. I'll probably stick the photos on that thread in General Discussion.

Cracking day out,with a good bunch. I thoroughly enjoyed the horns for a first time bit of scrambling. Pity the summits clagged up, certainly a hill i'll do again on a good day.

Enjoyed your report and certainly looked a great day out After the first horn....looking very smart! The gang on the highest horn! Gathered on the link route between our two summits. Tom na Gruagaich, the scene of the flapjack tasting :)

Sreat report on a superb day out,the scramble over the Horns was great fun. Can't believe you didn't get a summit shot on Tom na Gruagaich after chastising me for doing the same on Sgurr Mor!

Not sure where that burst of energy came from as you shot off down the path towards the end. Was it that tasty flapjack kicking in or could you taste your burger & pint waiting for you in the Torridon Inn?

Nice one Nathan. Looking quite bright there again! I toned it down a bit that day! Good to see the word "bimble" being used again in a TR. Been a while.......