Part 1: Beinn Narnain (Sunday 3 January 2009)
With the weather forecast promising settled and cold conditions in Scotland for the coming days, I was getting my ducks in a row. I had an autumn-full of brownie points burning a hole in my rucksack quicker than any of the cash-happy granddaughters who were desperate to hit the Boxing Day sales. My old crampons fitted my new boots. And we had the regular invitation to the West End party of a Glasgow-based friend after the New Year.

So, away from Warwickshire by 8, and we were cradling the glass of merlot by 4. Our 320 mile drive north, through umpteen snowstorms, shamed those who couldn’t make it through from Edinburgh. Tell me, why do you “go through to Edinburgh / Glasgow” up there? As a Yorkshireman I went over to Manchester because there was a big lump of Pennines in the way. We went down to Nottingham because that’s the way the M1 went. But what do you “go through” to get to Edinburgh? Is there a cultural vortex, a worm hole to a parallel universe, or just a big door to the west of Livingston? My wife (Ayrshire origins) has never been able to explain it.

Enough, I digress, there are hills to climb.

Ben Narnain was first on the list. On a foul day back in June I’d given the hoody-clad sulking hulk a wide berth before it frustratingly emerged like a lazy teenager in the sun of mid-afternoon. This time I was going to get the legs and lungs back into working order with an early start and try to catch it before it woke.

It could have been a bad start. The planned breakfast sandwich was scuppered on discovering the Esso garage on the way through Dumbarton was closed for redevelopment, and I was too late to catch the gap in the dual carriageway to use the BP one on the other side. A cereal bar and three satsumas sufficed and kept the wolf at bay until the light from the little store in Arrochar suggested that unfrozen chocolate might be available.

The eight o’clock start heard a crisp crunch up the path through the forest and between The Cobbler and Narnain to the Bealach a’ Mhaim. The festive excesses started to be burned off and the effort was rewarded with the pink hue washing across the tops ahead as the sun rose over Ben Reach from behind. This was what it was all about. Fleeting moments of colour emerging from a flat monochrome, before the textures and shadows of the snow, and the frost on rocks and tufts of grass, brought the landscape to life. 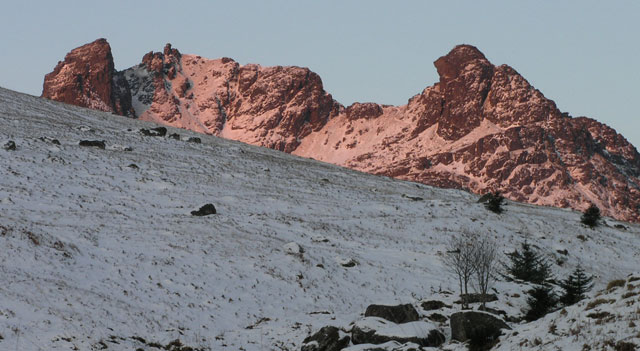 Sunrise glow on The Cobbler

A lone figure ahead had veered off towards The Cobbler, giving a sense of scale and perspective, and an opportunity to enjoy the silence. The two other cars left in the car park before sunrise gave little hint of the upward stream that was to follow later in the day.

After enjoying the well trodden and compact snow on the path to the Bealach, the pull up Narnain’s west ridge was a stark contrast. This was really reminding the system of its excesses. A thin surface crust took little weight and avoiding any of the chocolates and fine dining would have made no difference whatsoever. The occasional steps of the previous day’s visitors gave some relief from plunging into the powdery stuff below, before the summit was finally reached in an eerie light and brisk wind.

Above, a dappled darkness was created by the cloud formation drifting across. To the north the sunlight tipped the tops of Ben Lui and its neighbours, while to the south the illuminated tropics of the Clyde beckoned. The tower blocks of Glasgow were just visible bristling from the haze that hid the city beyond the southern shores of Loch Lomond and the intervening hills.

Glasgow - from summit of Beinn Narnain

The temperature cut short any contemplation of mortality, the meaning of life, and guilt about the “thank you” letters that still had to be written. Gravity helped the descent through the worst of the powdery stretches of snow back to the Bealach, where crampons were fitted to tackle the compact snowy track and the icy path down through the woodland. The solitary walk up was a far cry from the well-populated descent. The understandable accessibility of this group of hills to the big city, and so many people, made the early start a good decision, to say nothing of the ability to get a place in the car park. 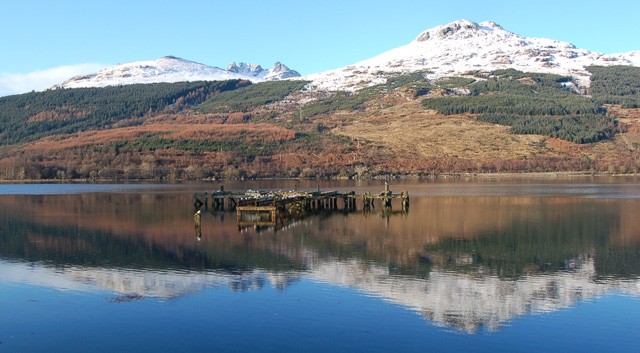 The Cobbler and Beinn Narnain from Arrochar

A great time out. The cobwebs had been blown off, a calorie deficit for the day might have shed the odd ounce, and a brownie point had been very well spent. Unlike the girls at the sales, I won’t be looking to take this one back.

Loved this one great report was my first Munro

Some lovely pics there - wish I'd seen Narnain - I really wanted to see the Arrowhead Buttress instead of just a misty shape!

What are these 'brownie points'? Some part of that terrible institution of marriage?

Great report and pics - thanks!