The car's been in the garage most of this week,so I had to use public transport for this. one. This made it a long day- it took 2 trains and a long bus ride to get to Buckden, and another 2 trains to get back from Horton in Ribblesdale.But it also meant I didn't have to do a circular walk to get back to the car. Path up to Birks Fell from Redmire farm Rather than follow the bridleway up to the top and then walk along the ridge, I decided to take a more direct route straight up the hill.This was a bit steep in places, but not too difficult.
Before long I was at what I hope was the summit cairn of Birks Fell- it was hard to tell because the ridge is very flat. From here, I followed the wall along the ridge for a couple of miles.I had to use the map and compass a few times to figure out which wall I wanted to follow. The ground was very wet and boggy, probably because of the melting snow and the rain we've had recently.Unfortunately, the boots I had on weren't waterproof enough and I ended up with wet feet. 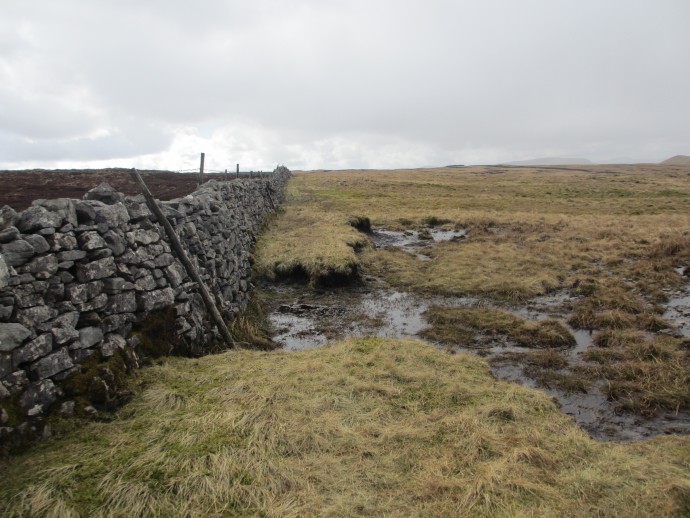 Eventually I came to another summit cairn. This is called Sugar Loaf and is just under 2000 feet.It used to be classed as a Marilyn until someone did a survey and found out that Birks fell is higher. Sugar Loaf summit; Plover Hill and Pen-y-ghent in the background.

A little further along the ridge there's a good path which leads down to the valley near Halton Gill and Foxup. From Foxup there's afootpath towards Horton in Ribblesdale.About a mile and a half along this there's a signpost pointing the way up Plover Hill.The path goes up past some steep cliffs, but the summit itself is flat.There's a small summit cairn but it was on the wrong side of a wall, with no stile, and the wall was too high to easily climb over. I headed down towards Pen-y-ghent and found a break in the wall which allowed me to go back up and get a wonky shot of the summit: The path between Plover Hill and Pen-y-ghent was also very boggy.
I didn't need to bag Pen-y-ghent because I'd ben there before, but it wasn't much of a detour and it was the nicest summit of the day, and there's a well made path along the Pennine Way to Horton in Ribblesdale where I caught the train home. A good walk that one. Like you I assumed the picture of Birks was the top as I could find nothing higher along the ridge. Even the trig further East is at a lower level. I agree it is a very squelchy walk to the top of Horsehead pass.

Users browsing this forum: past my sell by date and 13 guests